Ok, first of all: the Get Geometric KAL starts TODAY! Eeeep! I've got my needles and yarn out and I am ready to knit! But, first, I want to show you the final Christmas gift that I made last year (it still doesn't feel like it was last year though!) which was this Welcome to Night Vale inspired painting for Rebecca ^____^ 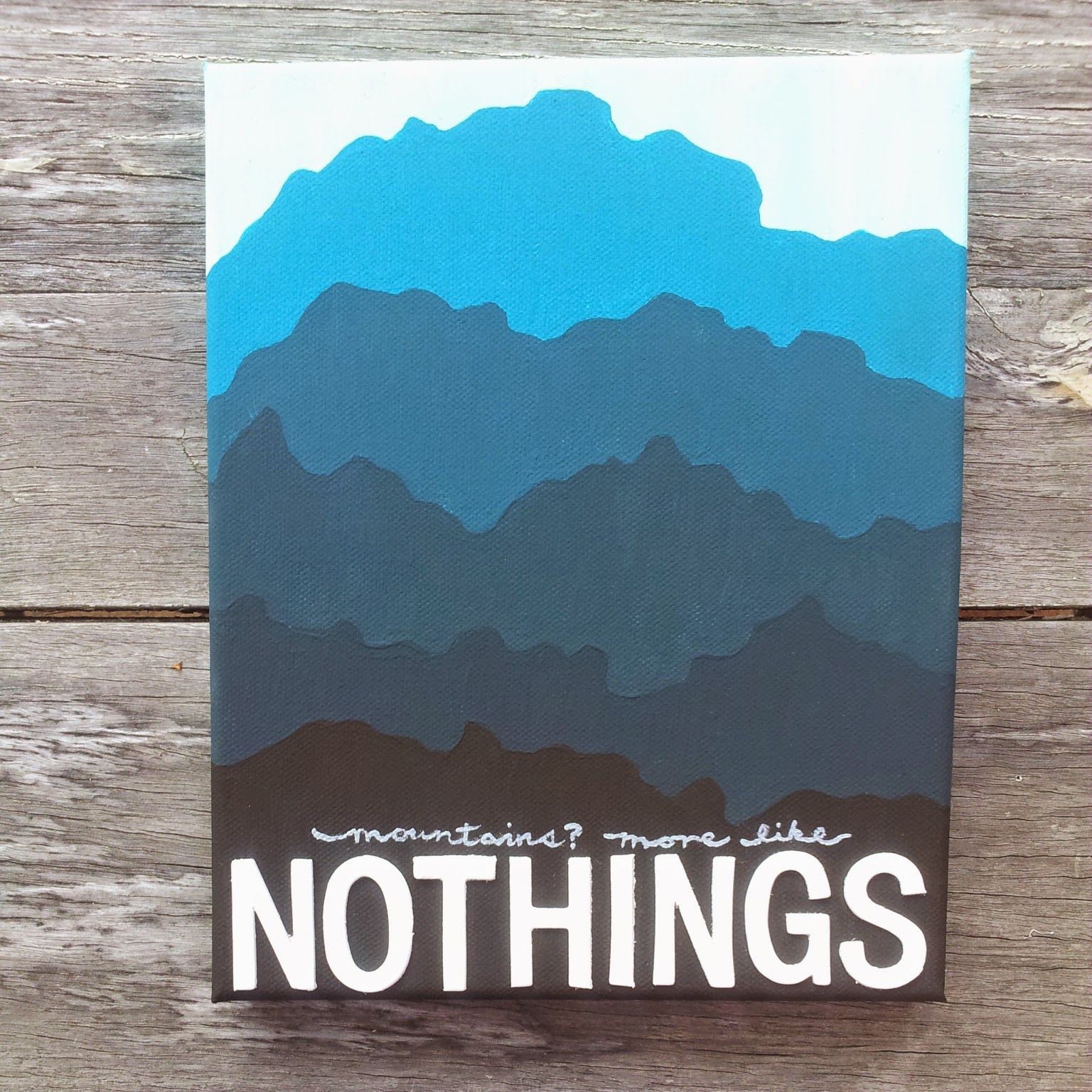 This was really easy and fun to do! I was inspired by this mountain mural; the first time I saw it on Pinterest I thought of Night Vale and then I simply *had* to make this painting for Bec ^____^ 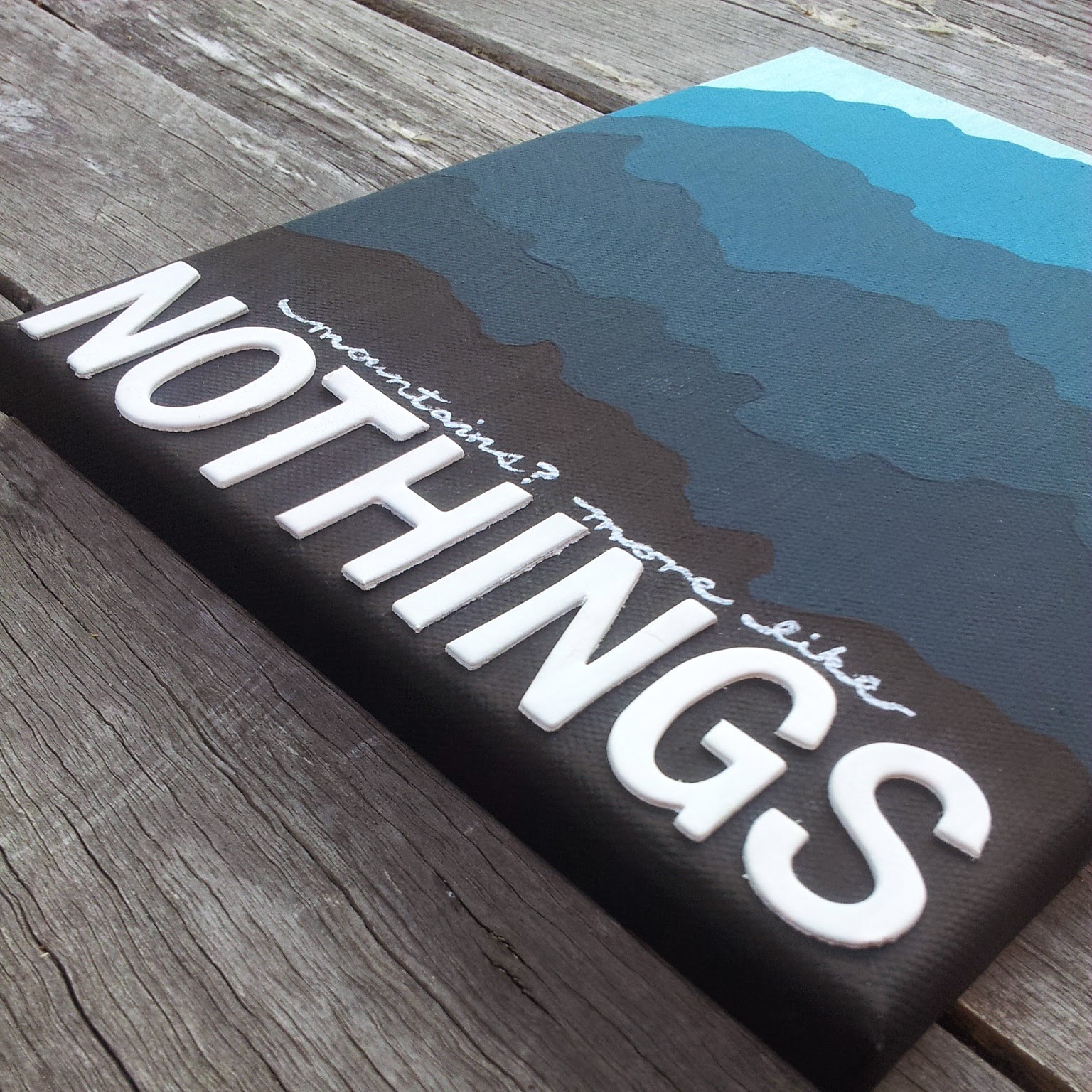 I started off by painting the entire canvas with a thin layer of spearmint green. Then, I used a pencil to lightly plan out how my mountains would look. This is not accurate to any set of mountains at all - I just scribbled along going "uppey bit here .... now a downey bit ... time for a plateau ..." until it was done ~____^ 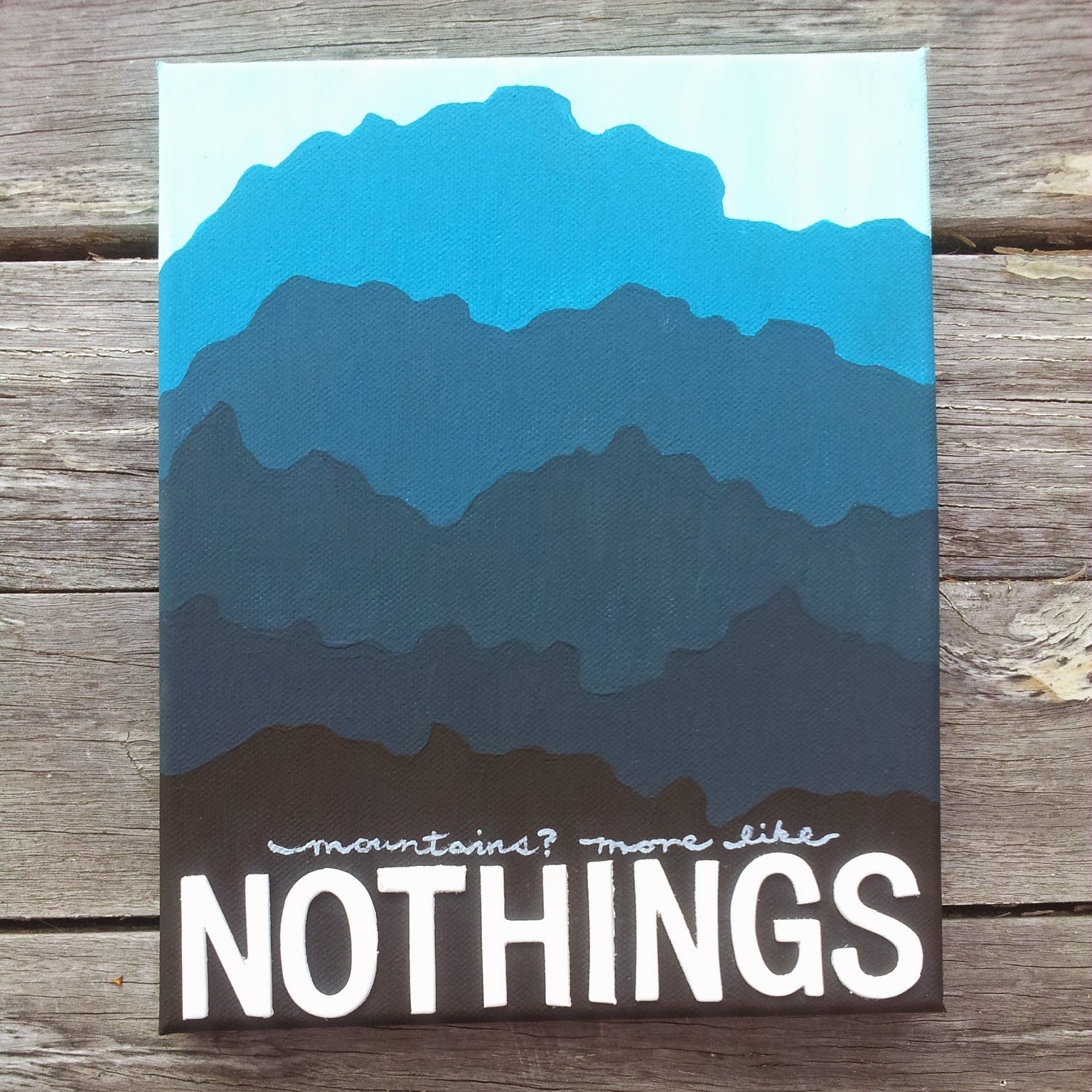 Next I poured out a generous glob of "tropical water" by Kaisercolour and painted in the first mountain range. I gave it three coats of colour to make sure it was properly opaque. I have a wet palette which means my paint doesn't dry up between layers. It's probably one of the more awesome crafting supplies I have. Once I was happy with the first layer, I added three drops of black paint to the blue and mixed it all together. I used this darker shade to do the three layers on the second mountain, and then I darkened it again to make the next mountain ... you can probably fill in the rest of this explanation ... 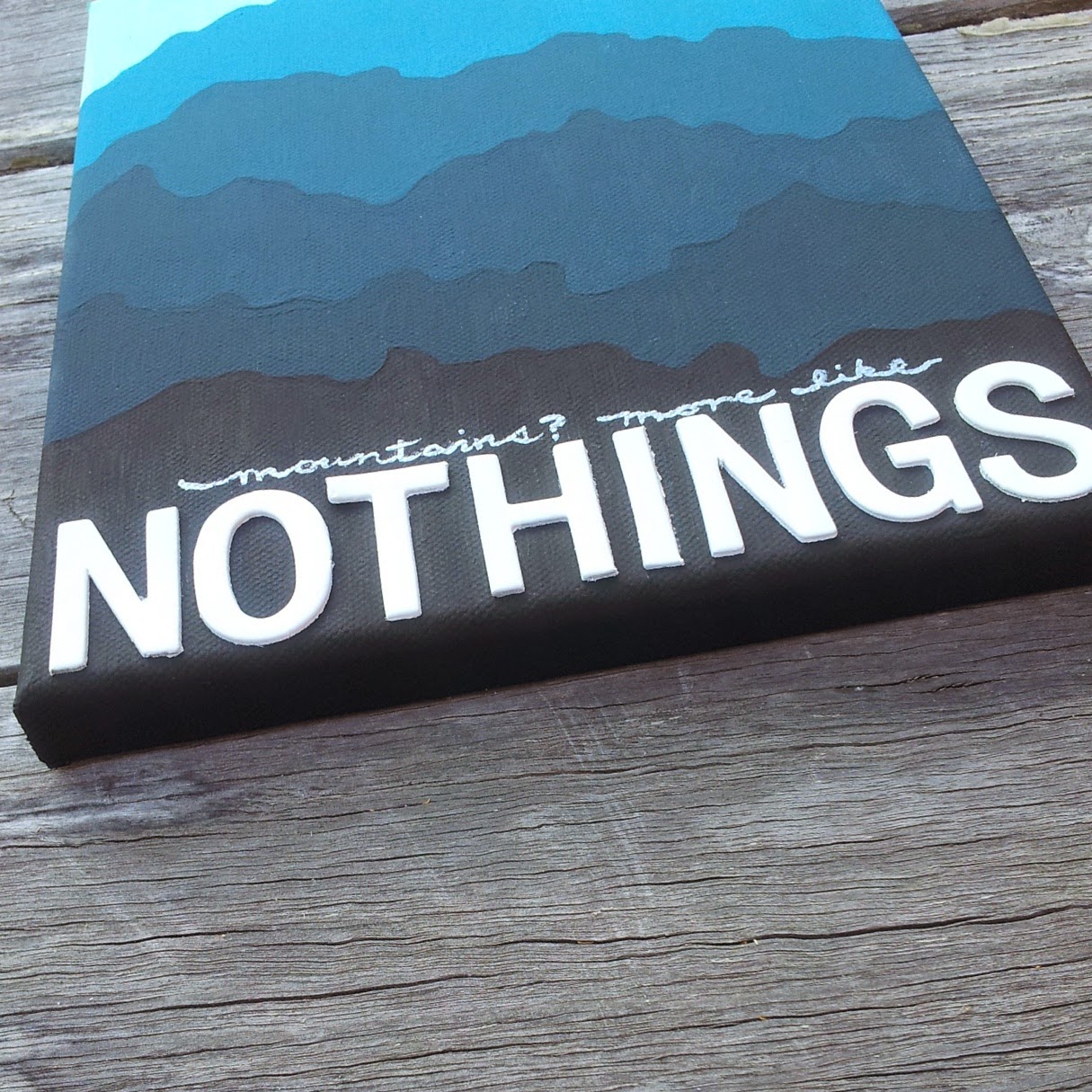 Once all of the mountains were done, I painted some chipboard letters white and stuck them on to the bottom on the canvas with PVA glue. Then I used a teeny tiny paintbrush to add in the first part of the quote. So tiny! 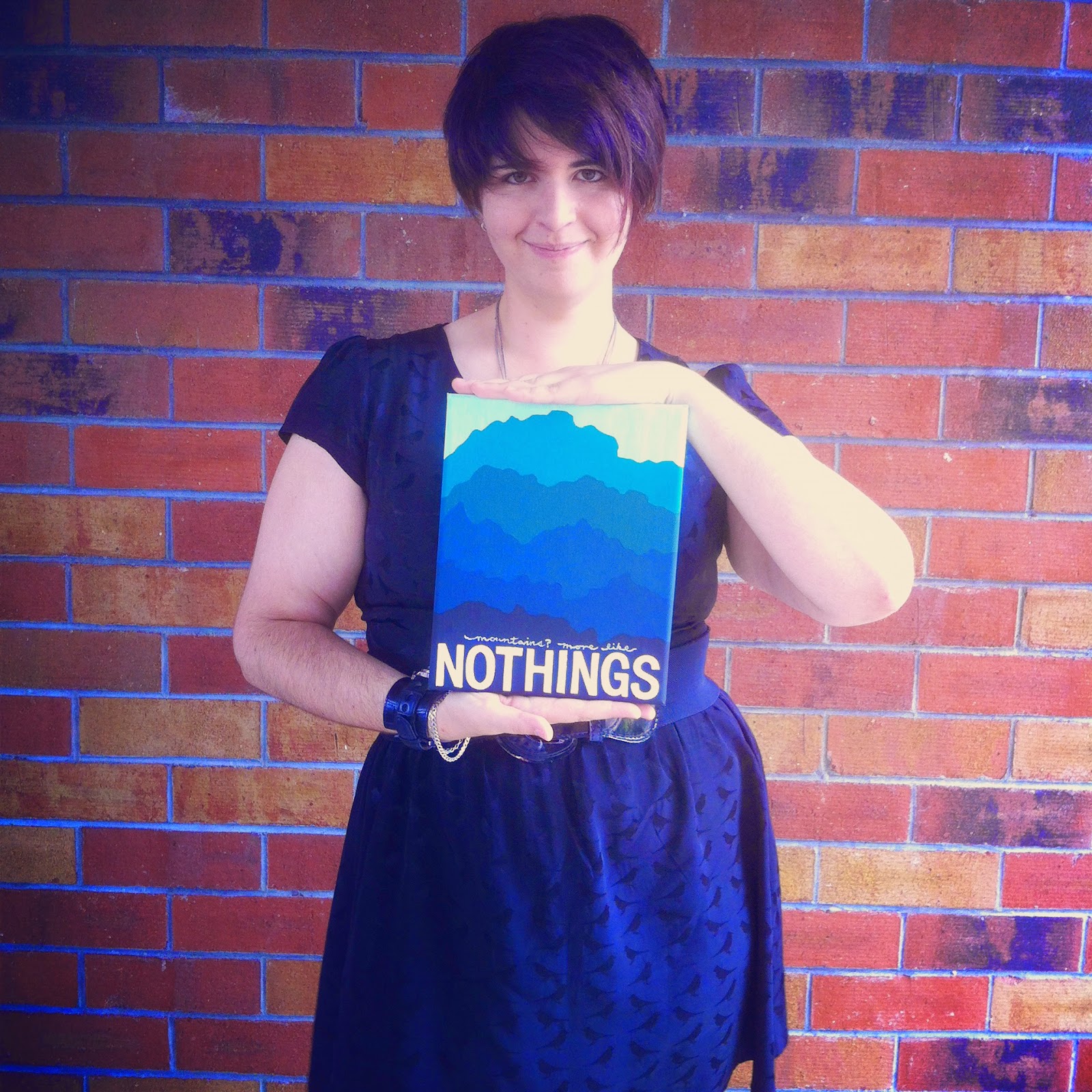 And here's Bec with her gift! Isn't her hair awesome?! I'm always slightly tempted to try a pixie cut, but I'm really unsure if it would suit me. It looks so good on Bec though! And even though Bec is a seriously talented artist, she still liked my painting! Isn't she sweet? 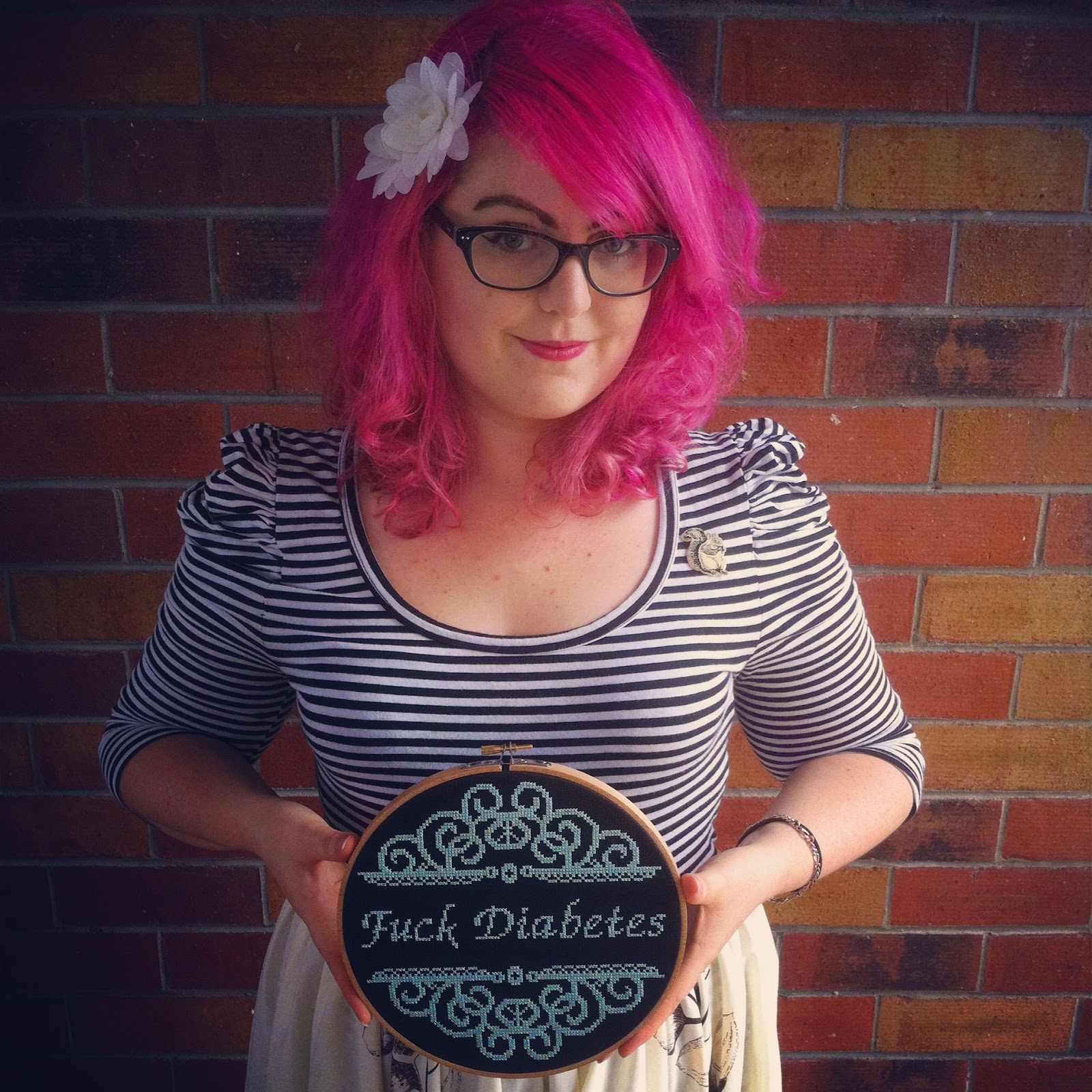 And this is the Christmas gift Rebecca made me! I think is the most awesome hoop I own ^___^ I love it so so much! The photo above makes me look very serious about it, but all of the outtakes are more like the one below ... 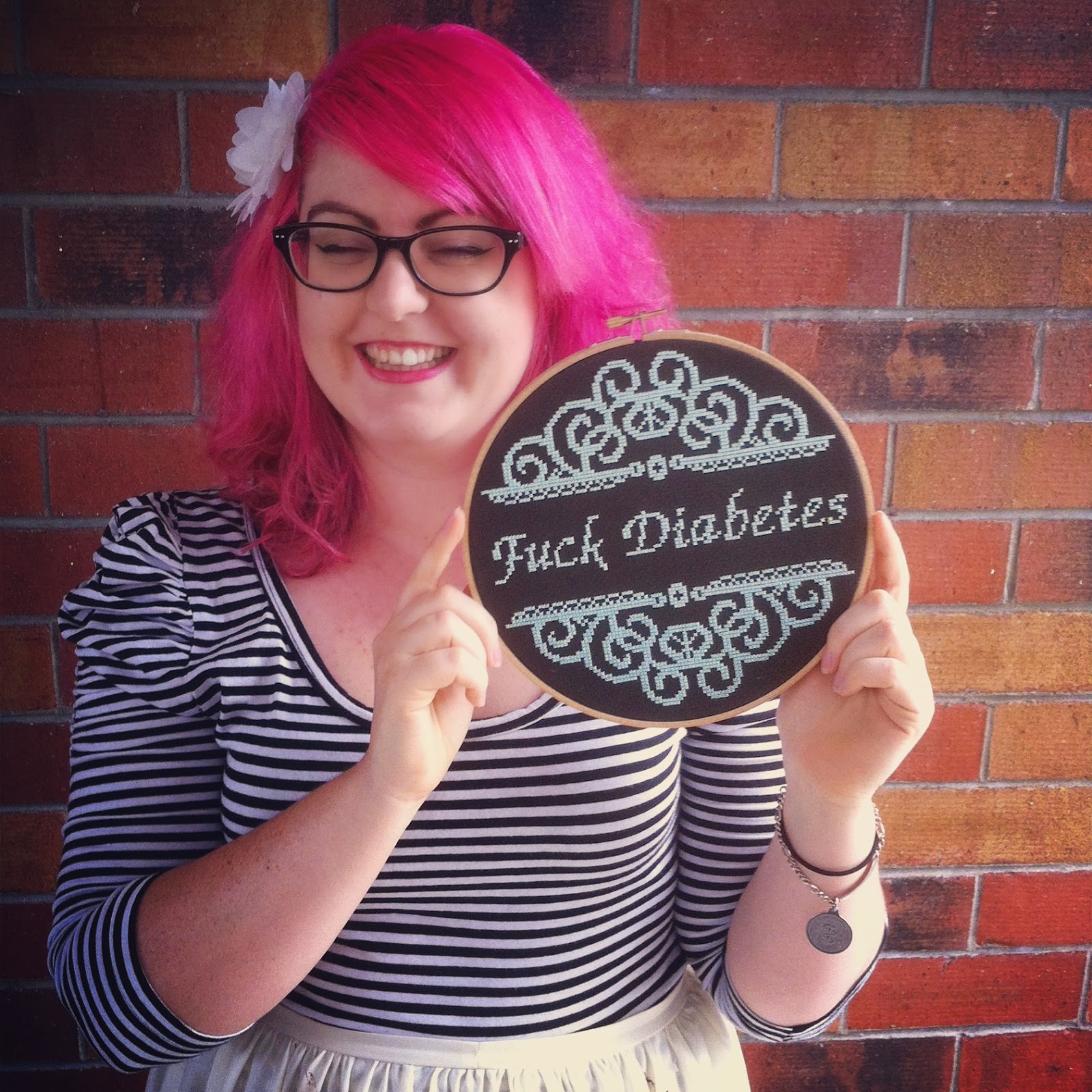 I can't laugh with my eyes open, apparently! I've hung this little beauty above my desk so whenever I'm testing my blood sugar levels or doing an injection or treating a hypo I can look at it ~___^ My diabetes birthday was two weeks ago ... hopefully we're another year closer to a cure! That would be the best diabetes birthday present ever.

P.S. I've been thinking about what I'll make and blog about this year, is there anything you particularly would like to see on here? Do you have any favourite parts (or non-favourite parts!) of this blog? I'd love to hear from you! ^____^

I read this while listening to Welcome to Nightvale.

Such an awesome podcast and such a beautiful painting.

Oh, both of those look gorgeous ♥
Amy xx

Thanks Beks! It really is a fantastic podcast - and so inspiring!

Thanks for your comment Amy! All these nice compliments are making me want to practise painting more! ^____^