Yesterday Pip, Bec, and I had a craft day. A *whole* day of craft. Well, no, that's a lie. We also spent two hours on breakfast ~_^ It was epic, but I didn't take any photos. You will just have to imagine bacon, sausages, hash browns, eggs, mushrooms, fresh juice, tortillas, and toast on a tiny table and the three of us going "nom nom nom". Paint that picture in your mind.
We also made softies. Pip's was a tiny, complicated elephant, which isn't finished yet, so no photos. But soon! Hopefully she will post them on her blog. We shall see.
We made these softies to donate to Softies for Mirabel - you should make a softie too! It is for a very good cause!
Anyway, I made a another jackalope! This one kinda reminds me of ravers, because she has so. much. neon. I love her ^_^ 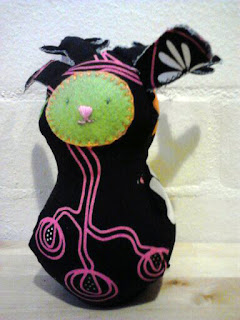 I used a bit of IKEA that I had leftover from covering a massive canvas. The bunny pattern doesn't use a whole lot of fabric, so I had heaps leftover.
Her ears are not stuffed, so they are nice and floppy, and her antlers just have polyfill in them. The first jackalope I made had pipe-cleaners in his antlers, but seeing as this new jackalope is for little kids, I thought forgoing the metal, fluffy sticks was probably a good idea. 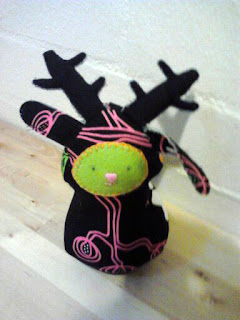 Group shot! Here you can see my jackalope, Bec's dinosaur, Bec's plaid Ninni monster, and my blue and red Ninnis. There will probably more about Bec's dinosaur over on her blog. 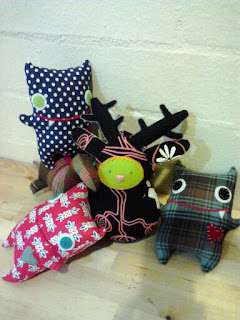 This photo is a little blurry, so sorry about that. I forgot to bring my camera, so we used my phone. I have a smartphone now! I am so excited by it! It runs on Android, and I really want to learn how to make apps. I have actually downloaded the program, but for some reason I couldn't get the emulator to run, and so I had to buy a SD card, and now I have one, but I haven't tried again yet. I will! As soon as this house is clean. <cowers in fear at the giant piles of dishes and laundry>
Anyway - back on topic!
Here are my Ninni Monsters! I love them soooo much! I am going to keep the red one for myself ^_^ That's still two softies for Mirabel though! 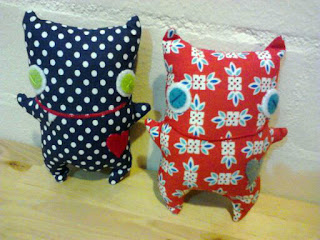 I want to make more of these cute little monsters, so perhaps I will organise a Ninni monster crafternoon for next year. That would be fun!
I hope you have a great day!
See you later ^_^
- Lisa x

sounds like a lovely day, though I get very impatient with sewing! Jacalopes look like your specialty :D

It was a really good day! I get impatient with sewing too, so I choose really easy patterns and take lots of tea breaks ~_^