Hello! I know Halloween is over now (noooooooooooooooooo ; __ ;) but I still have some spooky things to show you! ^__^ 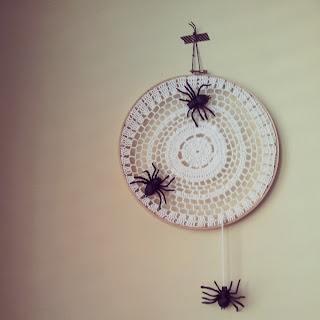 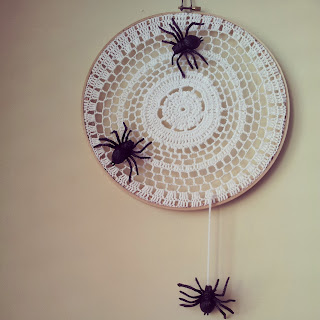 It was seriously so easy to do, and I'm really sad that it didn't have a long display period since I ended up decorating so late this year! >__< 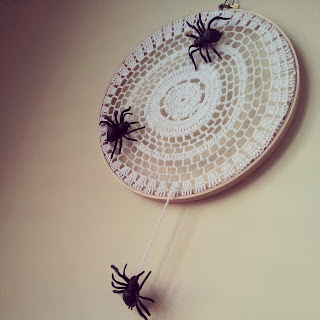 But, at least I've got a head start on crafting for next year, right? ^__^ 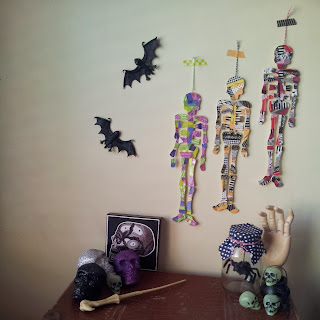 Here's the one tiny little corner that looked properly Halloween-ey (what's with all the end of year assignments, teachers? I don't have enough time for decorating! ~__^). Most of this is store brought, but I did make the glittery skulls and the washi tape skeletons (which you saw in the last post!). 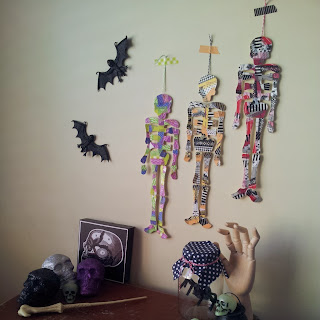 I did also make the spider in the jar. It was very easy and I think balances on the line between spooky and cute very well ^__^ 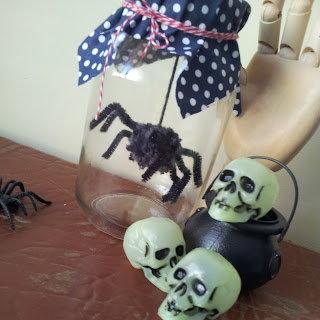 I used this tutorial to make the spider, although mine is a bit smaller so that it would fit into the jar and I gave it little eyes as well ^__^ After the spider was finished, I threaded a needle and pushed it through his belly, which created the hanging string. 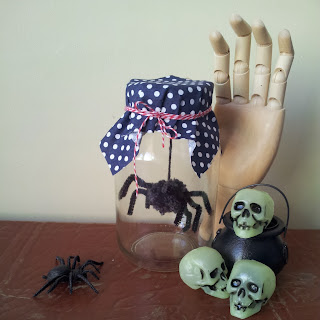 I glued the string to the underside of the jar lid and then, when it was dry, covered the jar top with a scrap of fabric and some baker's twine. Easy peasy! ^__^ 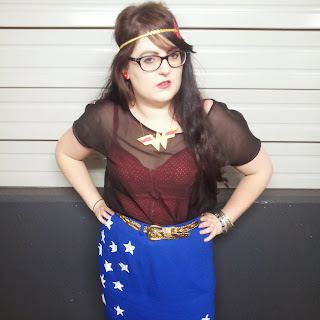 Lastly, here's my Halloween costume! ^__^ I decided on hipster Wonder Woman this year because I wanted to wear my glasses (so many people have told me that they look hipster!) and a skirt (because pants and I still aren't friends!). 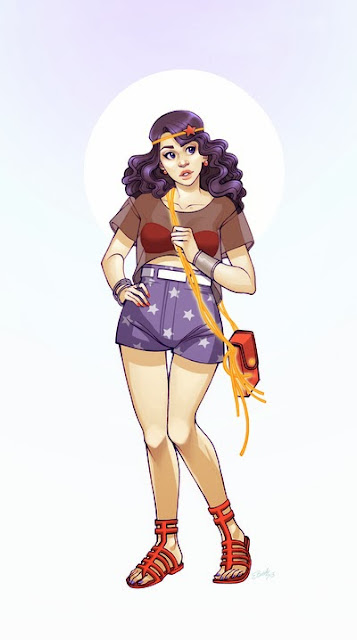 This gorgeous illustration by Elizabeth Beals was the inspiration for most of my costume (you should check out all of her hipster superheroines, they're amazing!) 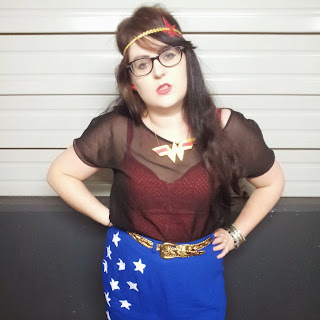 I made the headband using some gold ribbon and a piece of red leather which I cut into a star shape. My earrings are vintage that I got at an op-shop (and then soaked in antiseptic overnight ~__^), and my necklace is made from polymer clay and painted with acrylics. Unlike Elizabeth's Diana, I wasn't comfortable going out in just a bra so I wore a red corset style top underneath my transparent black top. I found the transparent top at an opshop and was so excited because it's vitually identical to the one in the picture! ^__^ My belt and skirt were also both from the opshop, as were my shoes and bag which I didn't take photos of (they are red high heeled Mary Janes and a red leather envelope bag with a gold chain strap respectively!). I already had the stack of silver bracelets, and the stars on my skirt are made from white felt and are just tacked on.

Did you have a great Halloween? Tell me about it! ^__^

That spider jar is adorable! I may have to make one, even though Halloween is over!

LOVE your costume! I regularly get accused of wearing hipster glasses as well, but I swear I wore them before that was cool. :/

Your halloween decorations are fantastic! Your spider jar is just too adorable (they cute fabric lid makes it for me), and the doily web is very effective!

Thanks Alexandria! Spiders are pretty good all year round decoration, I think! ~__^

Ha ha, same! I've been wearing thick black frames since I was about 13, but I've never been cool enough to be a proper hipster! ~__^

Thanks Bec! I like the fabric jar lid too, it reminds me of making jam with my mum when I was a kid! ^__^

EEEEeeee!!! How have I not seen this before!!! And that shirt really is spot on <3