Hello! As is apparently typical for me during holidays, I have been suffering a little from crafter's block. It's rather frustrating! As soon as I have plenty of time to work on projects, I start feeling aimless and unsure of what to make; add in a couple of failed crafts and I'm not a happy camper! So I decided to fall back on jewellery making to help me get my mojo back ~___^ 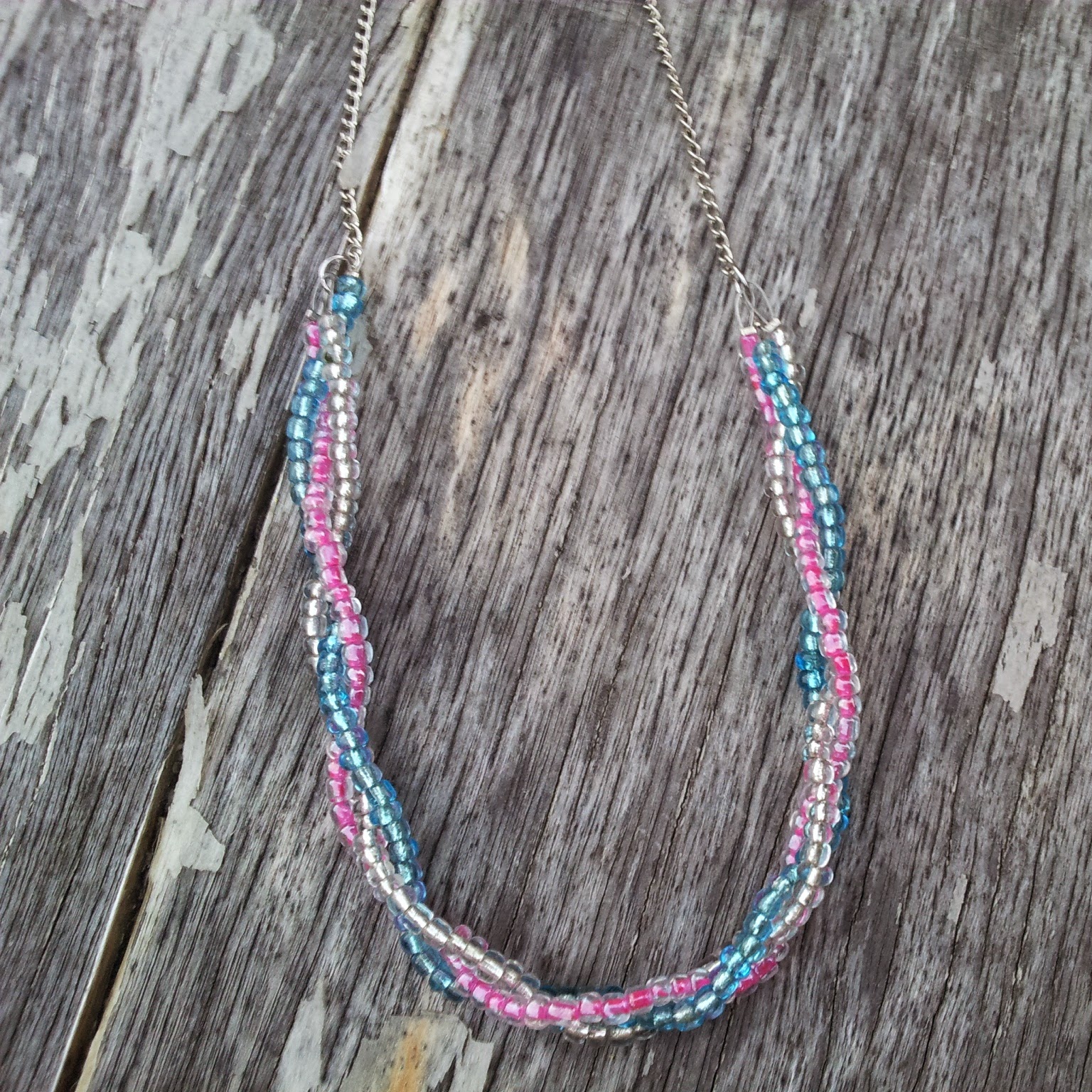 Although I did do crafts as a child, jewellery making was what roped me back in as a teenager. There was a huge trend of wearing beaded necklaces and earrings when I was in high school and I gleefully jumped on the bandwagon; I brought tons of tiger tail and seed beads and spent lunch time selling my creations from a small container in my school bag. I still have a pretty extensive collection, even though I haven't brought any beads for years. I think maybe they multiply somehow? ~___^ 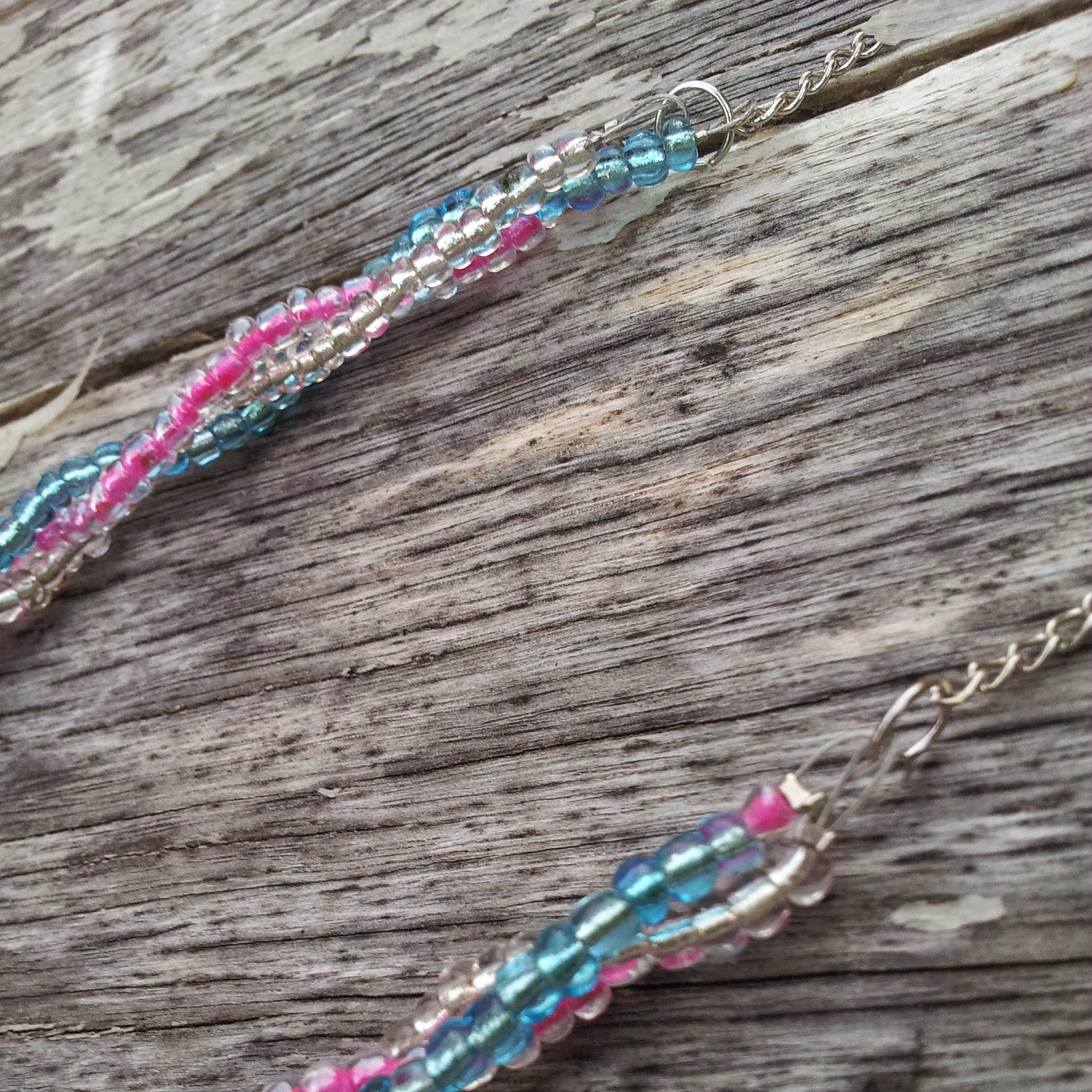 Anyway, this necklace was super easy to make, and finally creating a successful project was very satisfying! ^___^ To make this, I cut three lengths of tiger tail and formed one end of each length into a loop using crimping beads. I threaded each length with a different colour seed bead (pink, blue, and clear, as you can probably tell) and then crimped the other ends into loops as well. Then I used a jump ring to gather the beaded strings just on one end, braided the lengths, and added another jump ring at the other end. 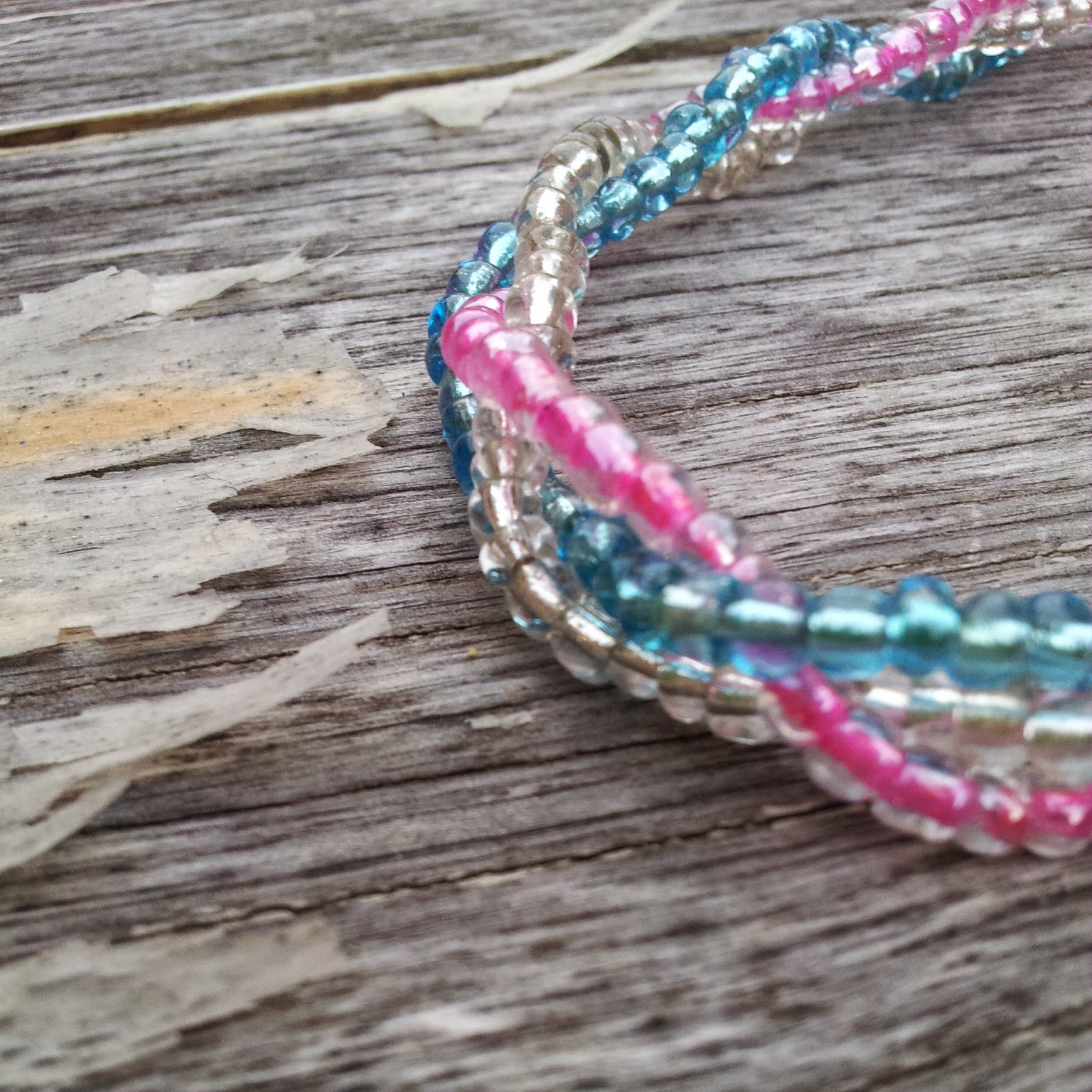 Once I had my beaded braid complete, I attached chain through both jump rings. If you wanted a long necklace, you could stop here, but I wanted mine to sit higher up so I cut through the middle of the chain and added a lobster clasp. It's a relatively stiff necklace, it doesn't have much drape and it's a little heavier than you would expect it to be, but it's still comfortable to wear and I think it looks really pretty ^___^ 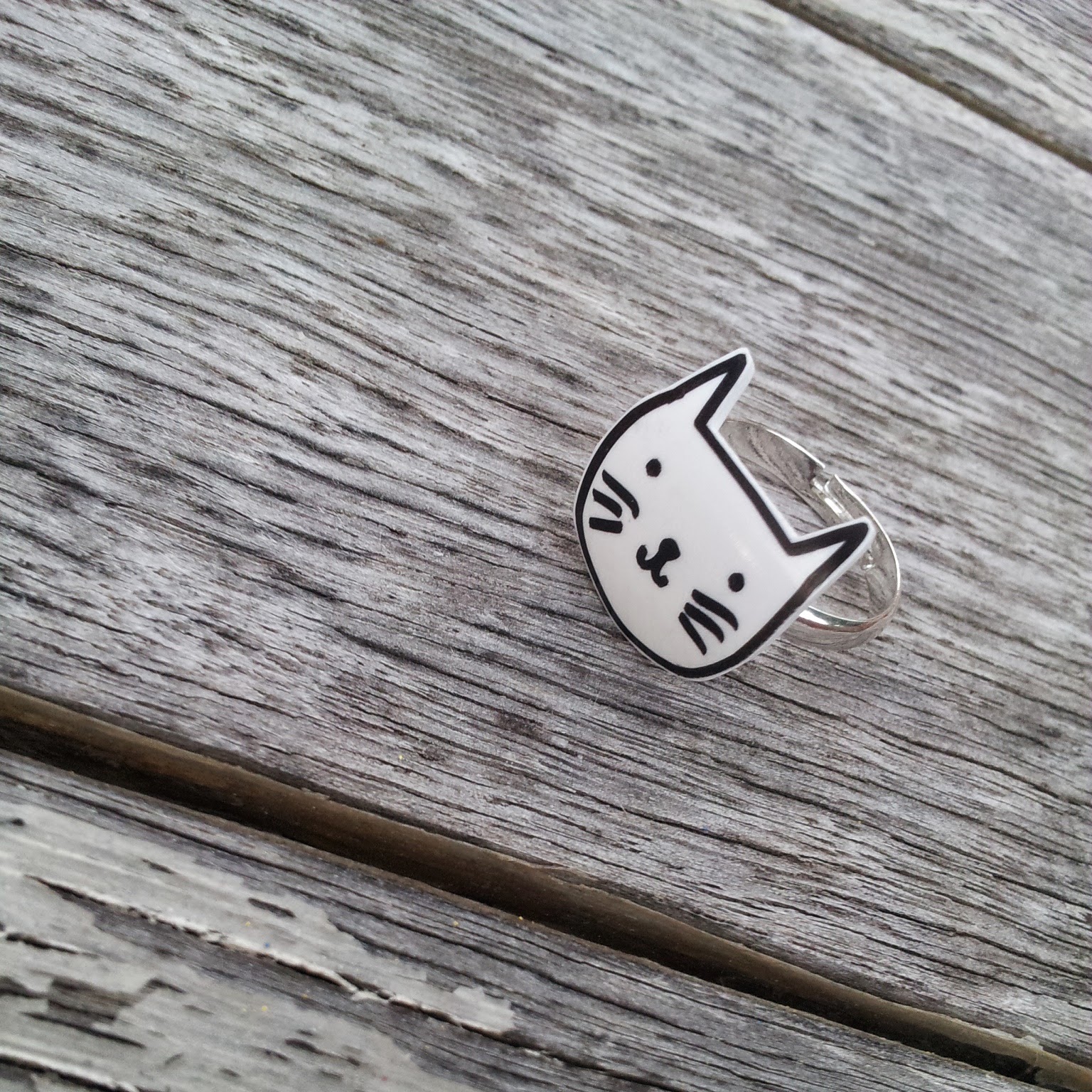 Since jewellery was working for me, I decided to make a cute little ring from some shrinky dink scraps. I find it really hard to throw out cut offs of shrinky dink; it's like, that could totally be something! In this case, one scrap I had was large enough to make a tiny kitty face. 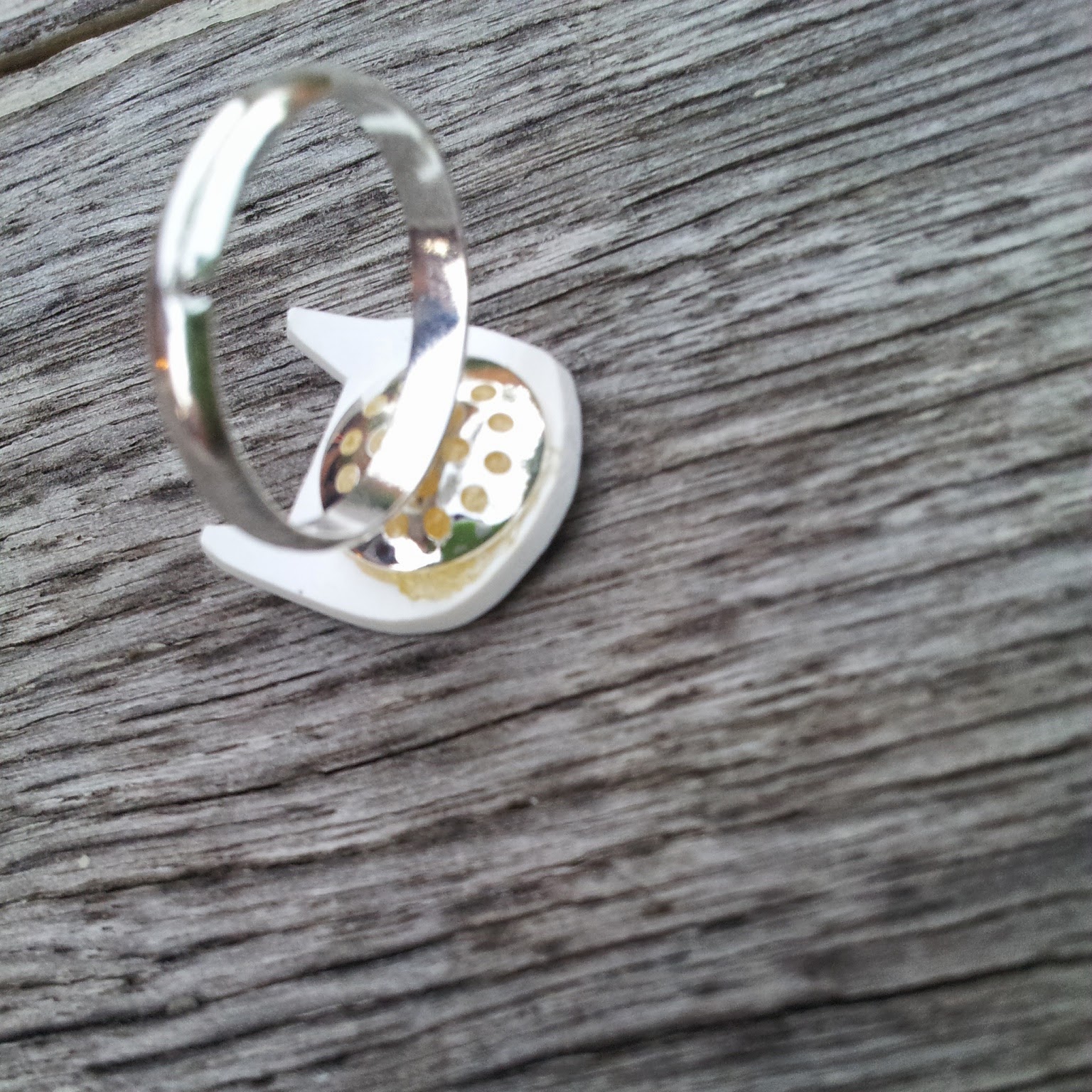 I ran out of E6000, and haven't yet gotten anymore, so I used Tarzan's Grip for this, which I hadn't used before. This glue swells up and becomes puffy as it dries, so I would recommend using less than you think you should. I had to cut away some of the excess dried glue from this ring, but at least I know for next time! ^___^ 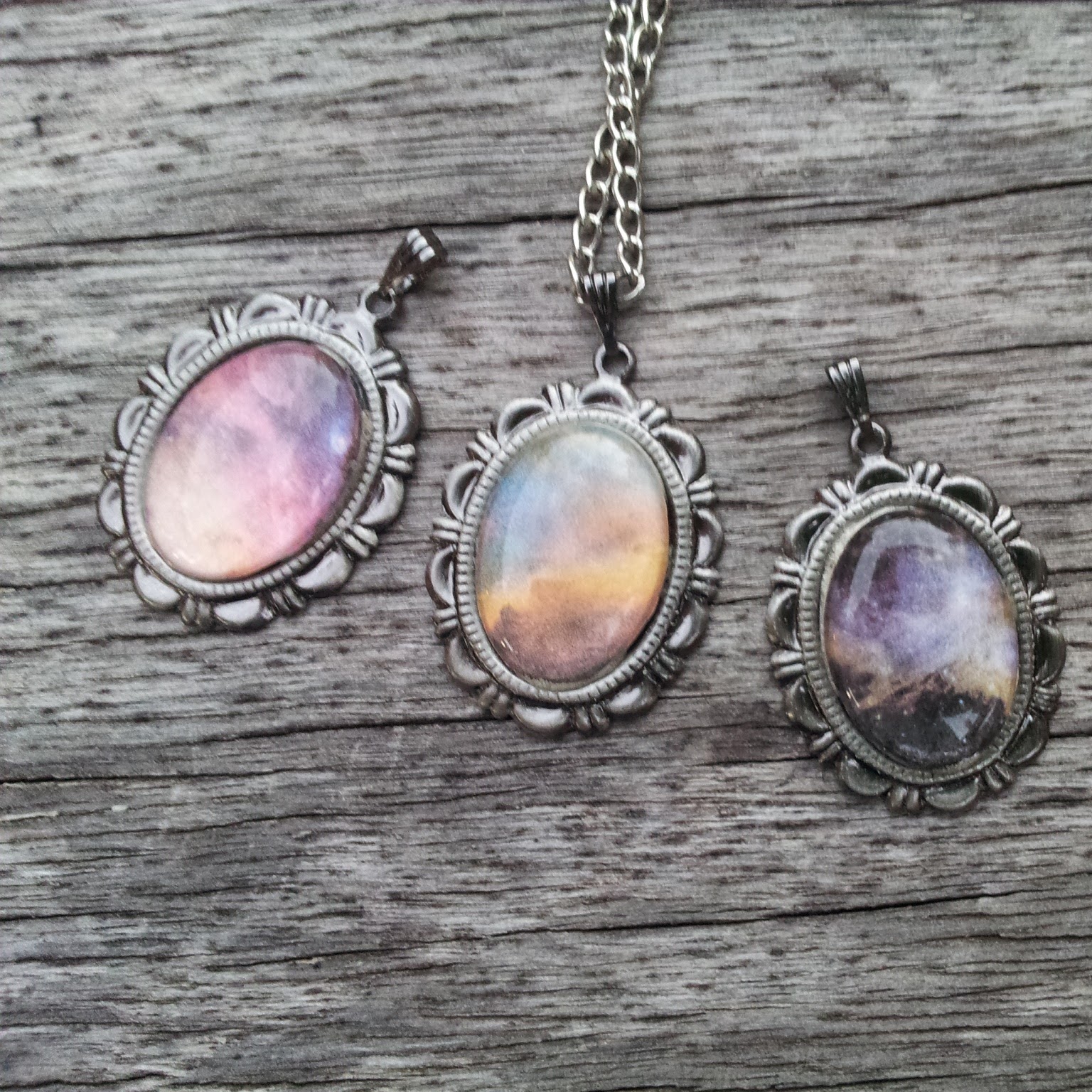 Lastly, I made these galaxy pendants. I found some great images on tumblr of nebulae and since I kind totally missed out on the galaxy trend a few months ago, decided to make something for myself. I couldn't decide between the pictures though (they're all so gorgeous!) and so I ended up making three. 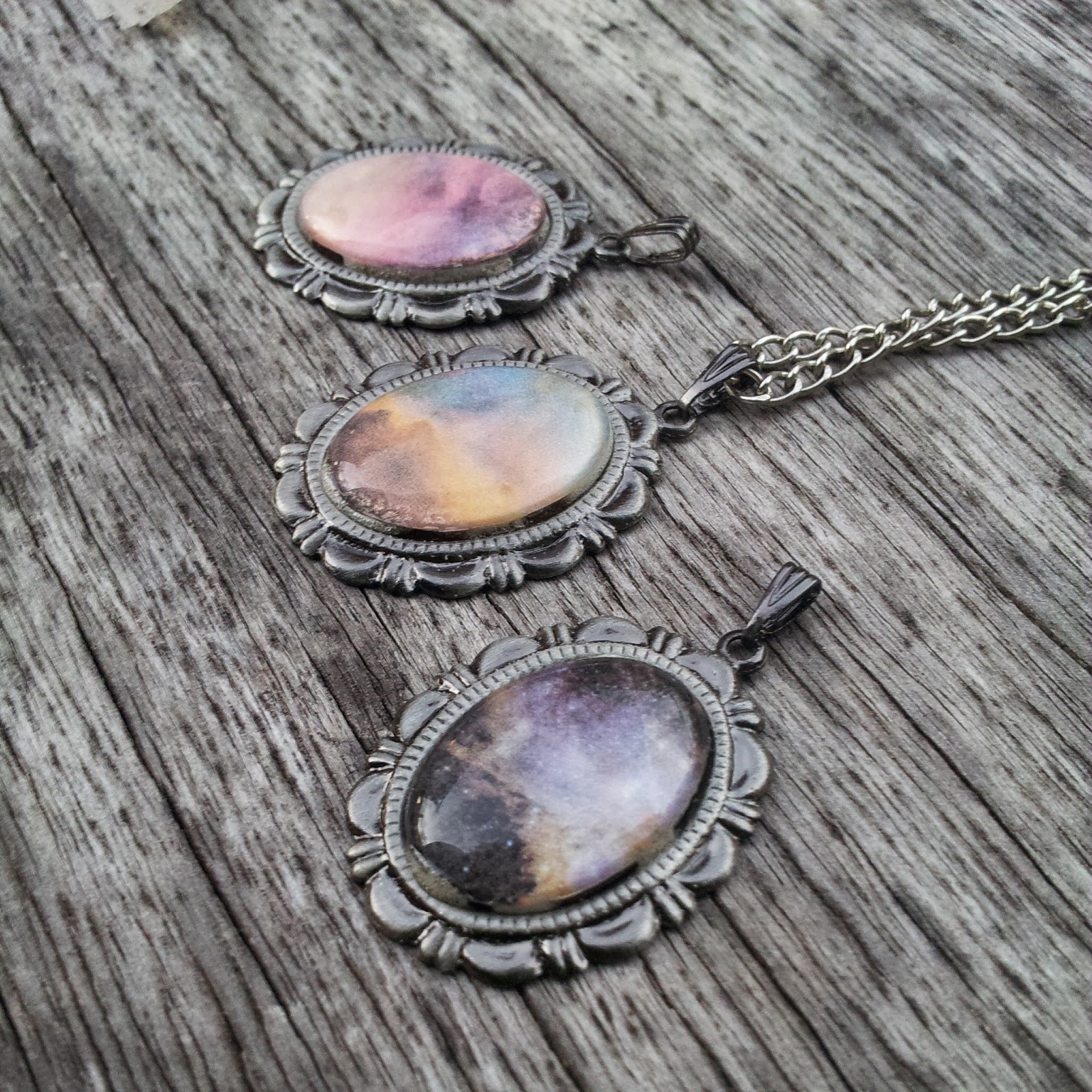 I'm not sure if these are super recognisable as space images though, and I think if I make any more I will add some glitter to the pictures. To make these I used some epoxy stickers which I positioned on top of the images; I trimmed the excess paper and then glued the domes into pendant cabochon settings. I added chain to one of them so I could wear it to work today, and I'm thinking about turning the other two into brooches ^___^ 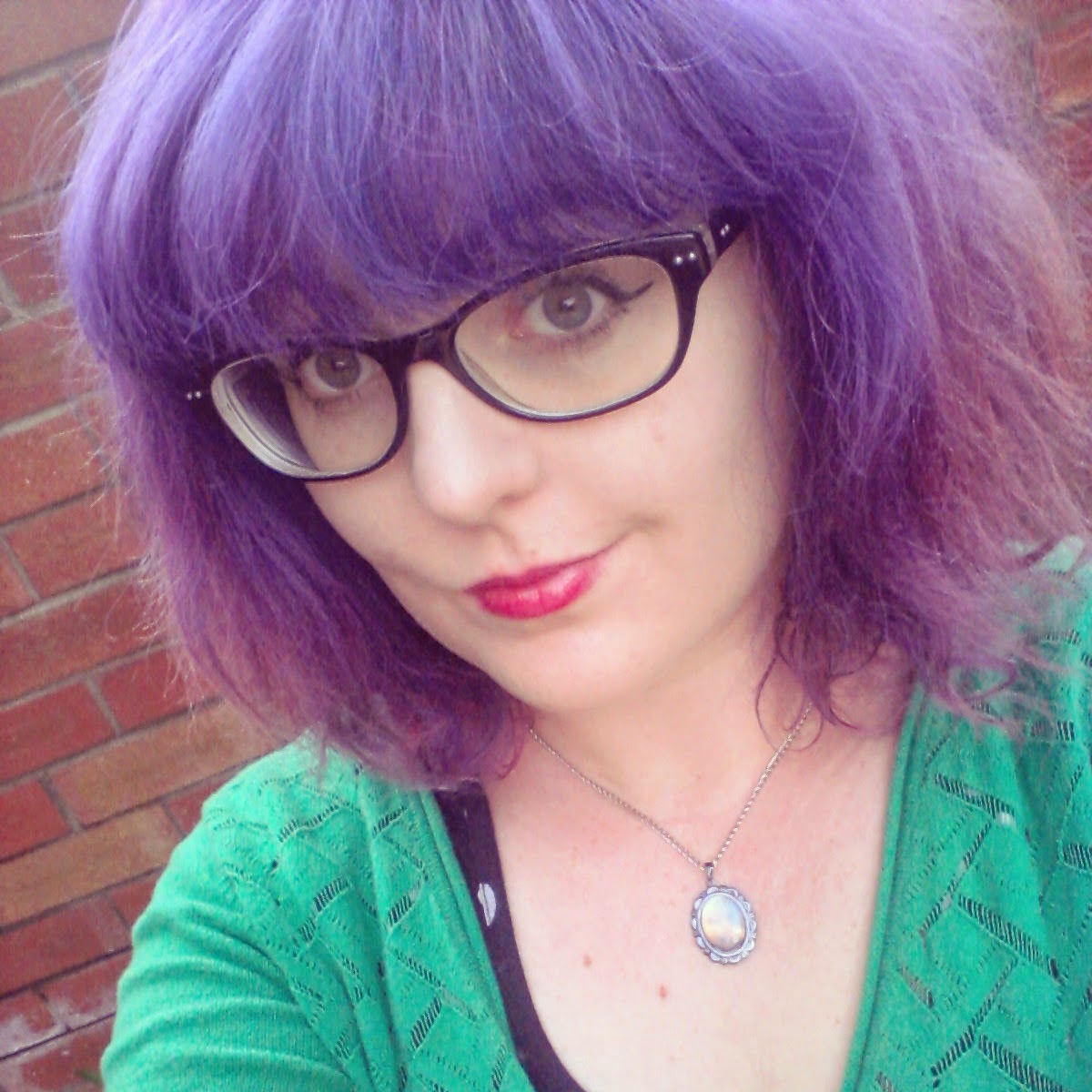 I've got some hair clips drying on my craft table at the moment, so I'll show those to you next post. In the meantime, fingers crossed my crafting block is a thing of the past! ^___^