Hello! This year for his birthday cake, Scott requested a Sarlacc Cake like this one made by Kathleen at Yummy Crumble. However he also wanted a gingerbread flavoured cake, so I didn't follow Kathleen's recipe. Instead I used my Anzac Cake recipe but omitted the coconut, vanilla essence, and vinegar and added two teaspoons of ground ginger, and half a teaspoon each of ground cloves and ground nutmeg. 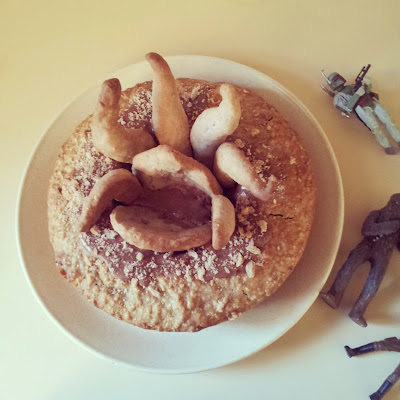 For the tentacles I used a cookie recipe from my trusty old "Family Circle Kid's Cookbook 2"; this book (plus it's predecessor) has been with me for years and years and even though it's missing its cover and has half its pages covered in cooking splatters, it continues to serve me well. I used the "Cutout Christmas Cookies" recipe, but adapted it into the recipe you see below;

Mix everything together in a bowl. With lightly floured hands, shape the tentacles and place them on a tray lined with baking paper. Bake in a 180oC oven for 15 minutes, or until golden brown. 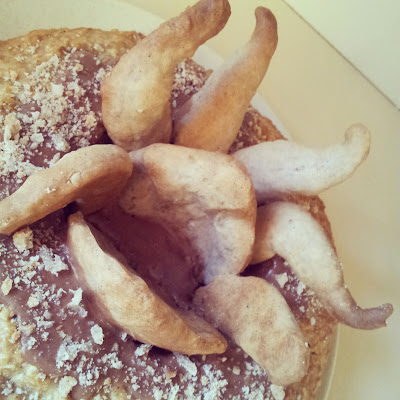 A Madeleine tray is recommended by Kathleen for shaping the jaws of the Sarlacc, but I don't have one and didn't think I could really justify buying one. Instead, I used aluminium foil to create two shapes that looked kinda like the head of a spoon turned upside down. I laid a sheet of paper baking over these molds and then shaped the cookie batter over them. It turned out pretty well! I had to cut off some of the biscuit because it was a little too tall for the cake, but I need biscuit crumbs so they didn't go to waste ^___^ 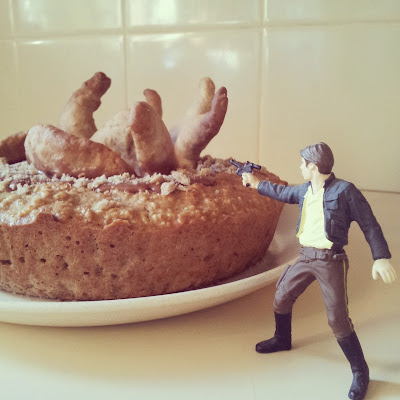 Once everything was cooked, I mixed up some cinnamon chocolate icing and put it in the hole of the cake and around the edges of the hole. The icing ensures the Sarlacc tentacles and jaws don't move around too much once you place them in! I used some of the excess biscuits to make into crumbs and spread them over the icing to resemble sand. 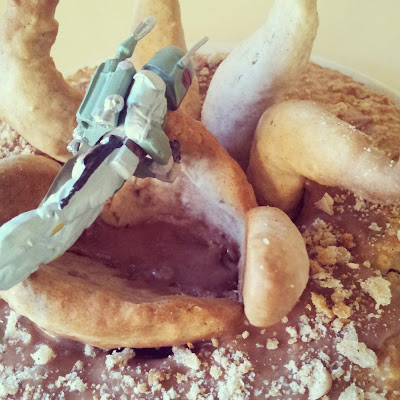 I added the remainder of the icing into the Sarlacc's mouth where it works to hold the jaw even more firmly in place, and also kinda resembles a maw. As you can see from the image above, Boba Fett was lucky to escape from that mouth alive! ~___^ 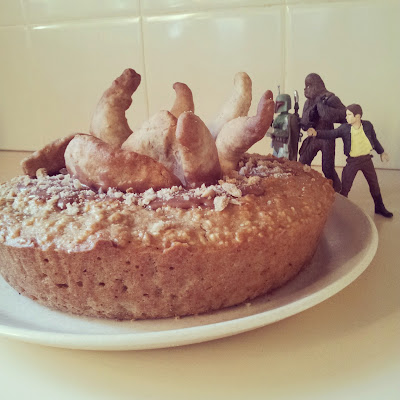 This is definitely not the prettiest cake I've ever made, but I'm still pleased with how it turned out and Scott and I can attest that it is very delicious ^____^

Did you make anything for Star Wars Day this year? Do you celebrate any other "days"? I recently discovered that Harry Potter Day is meant to be celebrated on May 2nd, but since that's so close to ISWD I think I'll celebrate on September 1st instead. Scott thinks we should celebrate on June 26th though, as that's when the first book was released. I guess we could always do it twice a year ... ~___^

So cute! This makes me want to get back into baking so BAD!

Thanks Alecia! I've really only recently been able to bake things that look as well as taste good (I used to be famous in my circle of friends for my ugly cakes!)so now I can't get enough! I will use any excuse to bake and decorate a cake ~___^

This looks amazing! Thank you for sharing, I got a lot of inspiration now! ♥
Amy xx

That's great Amy! I hope to see some Star Wars crafts from you next year ~___^

This looks awesome! I love it! I like that you used the foil to create the jaws. I never thought about doing that. I might use that trick for some other things :)

Thanks Kathleen! It's definitely not as beautiful as yours, but Scott was happy with it nonetheless ^____^