Hello! Do you ever end up with weird sentences due to autocorrect? I do, and that's how this first project came to be! I made a note in my phone to make a pom-pom garland but then when I looked at my notes the next day I had *actually* written pom-pom headband. At first I was just going to change it back, but then I thought how cool a pom-pom headband could actually be! 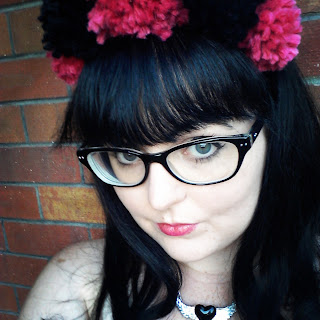 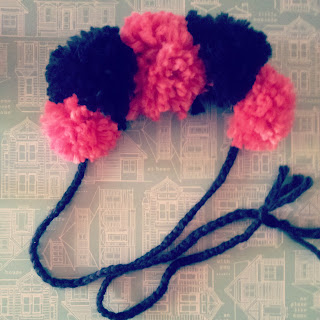 If you'd like to make your own, they are very easy to create! Here's what I did:

1. Make three big pom-poms and two smaller pom-poms. I used Moda Vera Shiver yarn, the same pink that I used for my chunky winter hat, and some black that I had in my stash. 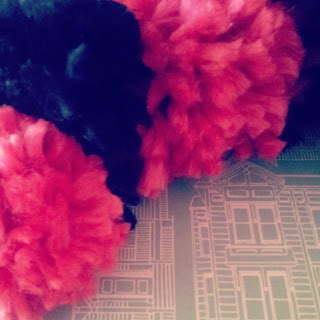 2. Make a long braid using some of the black yarn. Black is perfect for me as it blends in with my hair and makes it look like the pom-poms are just balancing on my head ~_^ 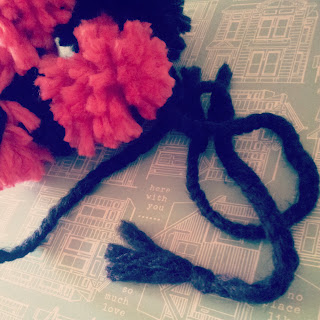 3. Using a short length of either black or pink (depending on which pom-pom you are attaching) and a needle, thread the wool through the centre of the pom-pom and then tie it onto the braid. You could also use glue, but I find that that can sometimes be itchy, and this way you can also make adjustments to how to pom-poms sit while you're wearing it ^_^ 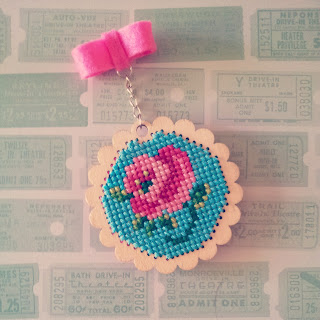 My next project is from the April issue of Cross Stitcher and was meant to be a key fob. However, since my keys already have waaayyy too many things hanging off them, I decided to make it into a brooch instead. 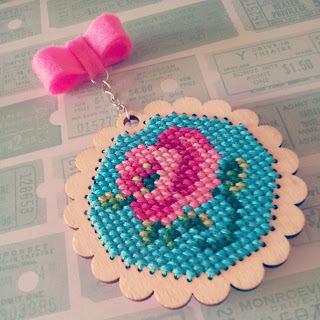 I stitched up the rose just like the instructions said, but then instead of attaching the key ring, I added a short length of chain which is then attached to a cute little felt bow. 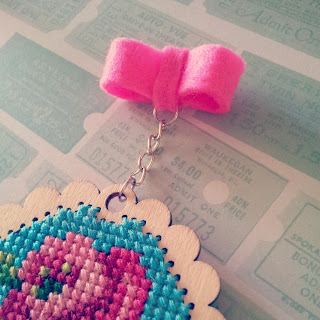 I think it looks even cuter like this! ^_^ You can't see this from the photos, but I have used two badge backs for this brooch; one on the bow and one on the back of the cross-stitch. I did that because I didn't think the bow would be strong enough to hold the weight of the wooden stitching panel. I also added a circle of felt onto the back of my stitching, which makes it look *much* neater and gives a better surface for attaching the badge back ^_^ 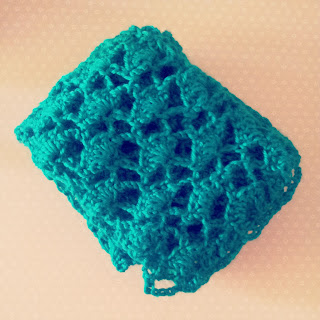 And, lucky last, here is my finished scarf! Yay! It looks *so* much better since I have blocked it ^_^ 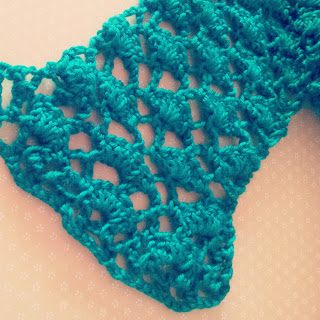 Does it remind you of anything? I wanted to make something a little bit different from just a straight scarf and the combination of the emerald green yarn and the shell stitch inspired me to make this my Mermaid Tail scarf! ^_^ 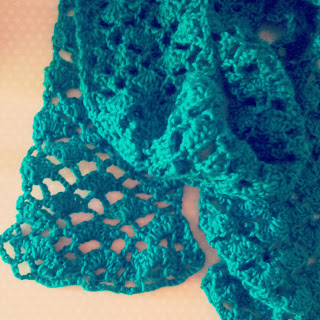 I didn't write down the pattern, but if you want to make your own it would be pretty easy - you just have to decrease a couple of rows after your foundation row and then stitch straight for the rest of the scarf ^_^ 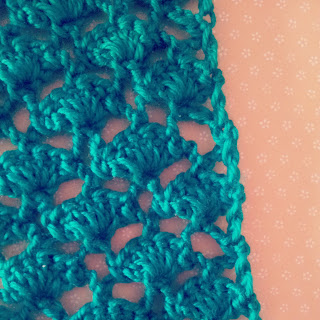 Here's a close-up of the stitch pattern; I used the Crochet Bible for the instructions and it's an easy stitch to do once you get into the rhythm of it. 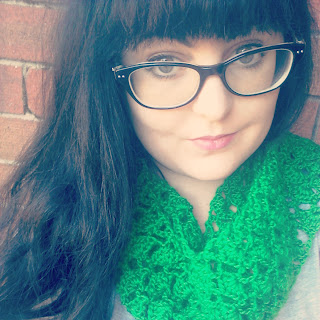 These pictures show the colour a bit better - isn't the difference between colours inside and outside amazing? 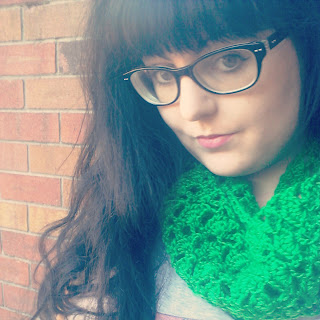 What do you think? What have you been working on?

Ha! I thought it was two different scarves at first! Lovely bright colour.

On what occasion would one wear a pom pom headband? I can't imagine attending a client meeting wearing one, but its super cute!

The photos certainly do make it look that way! ^_^

Tanya, I must admit, I've got no real answers for appropriate pom-pom headband wearing occasions but I will confess that I did wear it to the shops after it was done simply because I was so pleased with it. I am sure the shop-keepers around here think I am a little strange now! ~_^ Other than that, other options could perhaps be craft parties and/or when reporting for jury duty? ~_^

Thanks Sara - I am super pleased with the brooch and can't wait to wear it out! Cross Stitcher really picked a wonderful colour palette for that project ^_^

If I wasn't already disqualified for jury duty, this might really help! ;)