The title of this post is kinda misleading, because it implies that there is such as thing as too much op-shopping - which obviously not possible ~_^

Bec and I went on a relatively spontaneous road-trip yesterday for which we had three aims;
1. Get to our parents' houses' for dinner
2. Find a specific print of fabric for Pip
3. Op-shop our little hearts out.

We didn't have any luck on the fabric front (yet!) - sorry Pip - but we did achieve the other two things. Yay! We also managed to turn a two-hour drive to our home town into a six-and-a-half-hour drive o_0 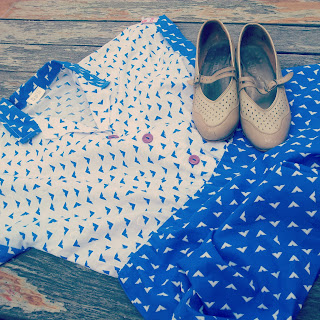 I am usually not very good at finding second-hand clothes, but I managed to find three dresses yesterday - huzzah! This retro blue and white dress was made in Australia, which I thought was pretty cool ^_^ It's a bit big, so I'm going to take it in, raise the waist, and maybe replace the buttons. The shoes in this picture are genuine old lady shoes ~_^ I have to wear orthodic shoes and inserts because my feet are all kindas of messed up which means I have to pay waaayyy too much for shoes. It also means that I'll never be a fashion blogger ~_^ Anyway, I got these pretty shoes for $3 - a saving of approximately $197 o_0 They are a little scuffed, but I think after a clean they will be as good as new. ^_^ 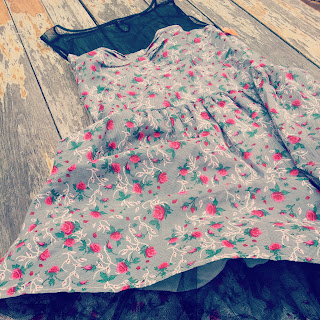 This dress is pretty new, and I just need to bring the sweetheart necklace up a bit - I think maybe the black mesh has stretched a little, so it's overall a bit low. I love the pretty pattern, and the black tulle underneath the skirt ^_^ 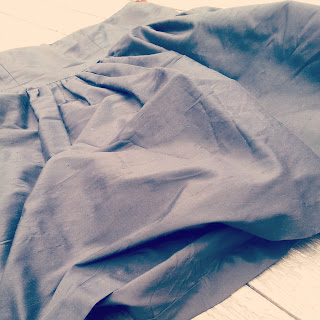 Not a great photo of this dress - it's a black, strapless, and possibly silk. I couldn't find any tags on it, and the zip is broken, but it was only $5 so I'm going to take it in and add an exposed metal zipper which I think will look really cool ^_^ 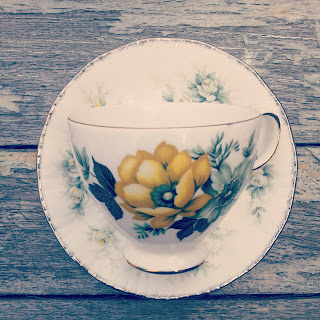 I also picked up a little bit of china - I was really rather restrained considering Bec and I saw a *lot* of very nice china sets. However, my collection is mostly mis-matched so I thought I'd continue on with that ^_^ The saucer is Paragon, the tea cup is Queen Anne, and they were both made in England. 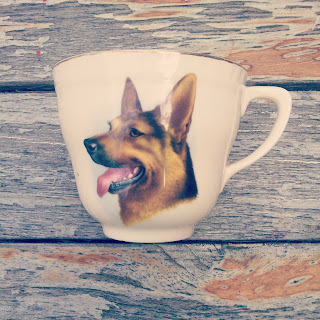 I also got this cute little puppy teacup, which doesn't fit my fancy china collection, but it was too sweet to leave behind ^_^ I don't know the brand for this one, but it was made in Australia. 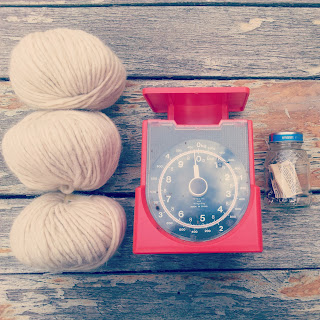 I finally found a cute set of vintage kitchen scales (for $1!), and I also picked up five balls of natural alpaca wool (I only photographed three though, because the balls are quite large and they took up too much of the photo!), and a tiny old jar with press studs in it. I think it's a baby food jar and I have no idea what I'm going to do with it, or the studs, but as it was also $1, I figured it was worth taking it home and finding out ^_^ 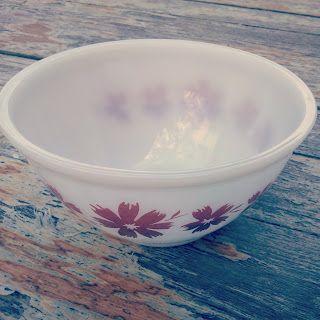 I was really lucky yesterday with finding pretty vintage dishes ^_^ This one is pyrex, according to the mark on the base, but I don't know what the design is called or the manufacturer. 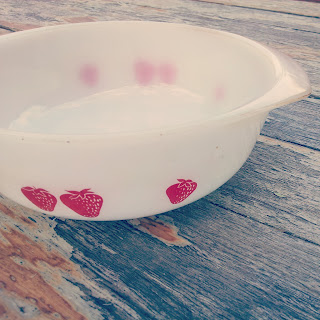 This one with the cute strawberry design is pyrex too, and was made in Australia by Agee. 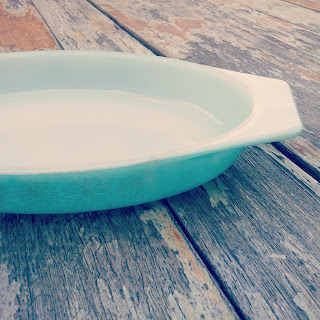 I am not sure if this Nestle's dish is pyrex, although it does look like it. It has pretty little white flowers on it, and I really love the light blue colour ^_^ 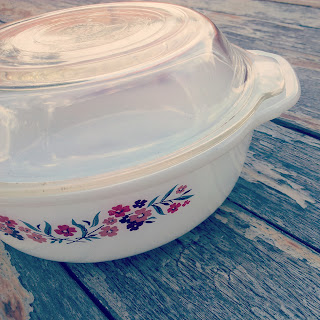 This is how this "set" came, but they are not actually meant to be together. The base is by Fire King and made in the USA while the lid is by Agee and made in Australia. Still, they go together relatively well, and maybe if I find more pyrex dishes, I can start matching up lids and bases properly ^_^ 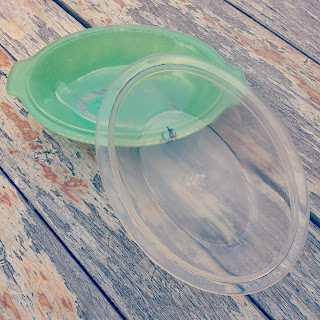 These two pieces also came together - but I'm not sure if they are both lids, both bases, or one of each! I *do* know that the green piece is more pyrex from Agee and the clear one is pyrex which was made in England. 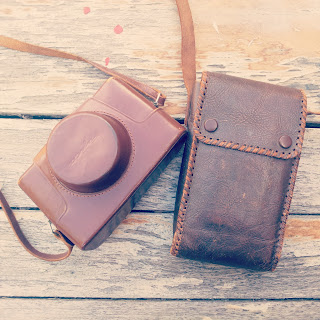 Ok. Here is my favourite find of the day. Possibly the year. A Fujica 35 Automagic and a Six-20 Kodak (Model B)! Bec and I found this tiny antiques store which had no staff in it and most things were pretty overpriced. We found the owner in a cafe, two stores down, and I asked him about the cameras - as they didn't have a priced marked. I thought they were going to be way out of my price range but he said I could have both for $40. This was my face:

It was kinda hard to keep my "oh, well I guess that's a good price, *maybe* I'll buy them" face on, because over the guy's shoulder, I could see Rebecca doing this:

That's her "you fool! Buy them! Buy then NOW. Why aren't you buying them?!" face.

So, I paid the nice man, grabbed the cameras, and then Rebecca and I got out of there before he changed his mind. As soon as we were out of view of the window, we started doing this:

I don't know very much about vintage cameras, but after doing a little research on the internerds, it seems that I did indeed get a pretty good deal, especially on the Fujica ^_^ 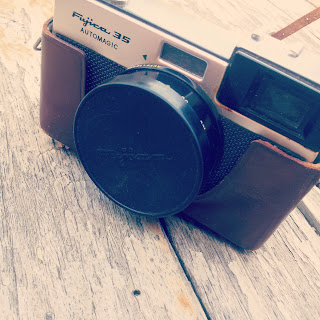 The Fujica is in it's original case, and actually has film in it too! It appears to be in good condition, nothing sticking or broken, and I am going to try it out later this weekend. 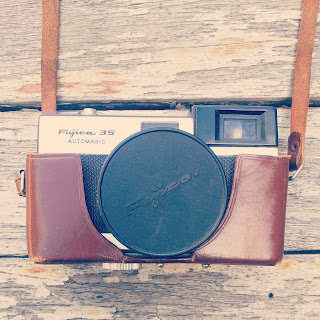 It can be removed from this leather case, but I like how it looks like this too ^_^ 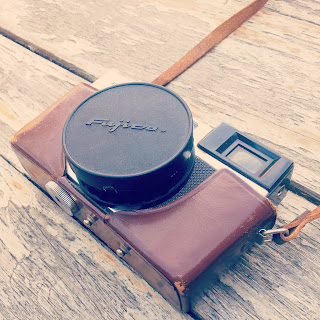 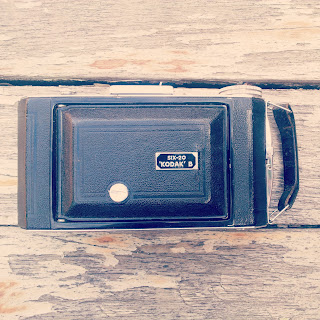 It is meant to open to the left, with the lens then folding out, but I think it's stuck. I didn't want to pull it too hard, in case I really did ruin it, though so I'm going to try and take it to someone who knows about vintage cameras. Any suggestions, WA peeps? 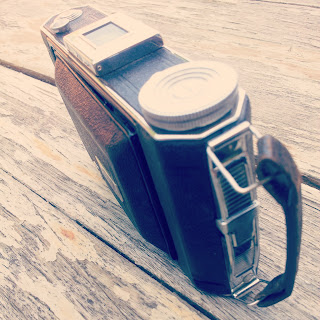 Even if it is broken, it is still nice so I don't consider this too much of a failure ^_^ 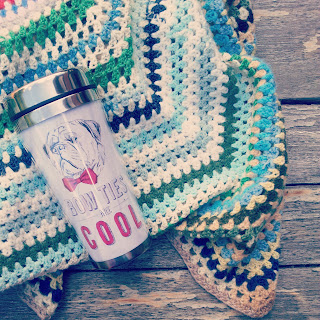 I also picked up some novels (not shown), this Typo coffee cup (for $1), and my parents gave me this blanket which was my Nana Tess's. It has a couple of holes in it, so I'll have to research how to fix them up. I like the colours though (it's another one of her stash blankets) and it is very cosy.

And that's it! Wow! ^_^
I had so much fun and definitely want to do this again!

Do you op-shop? Do you have a favourite find?

Fabulous finds Lisa, you had a busy day. I love the dresses and the cameras too.

Your GIFs are ridiculously accurate. Those cameras were an amazing score!

I had so much fun looking through reaction .gifs to find the perfect ones! ^_^ Still so happy with the cameras too!