Hello! A while ago on Instagram I mentioned that Scott and I have been married now for four years! Omg, right? The traditional gifts for the fourth anniversary include electricial appliances, fruit, flowers, and linen; nothing that really spoke to me. 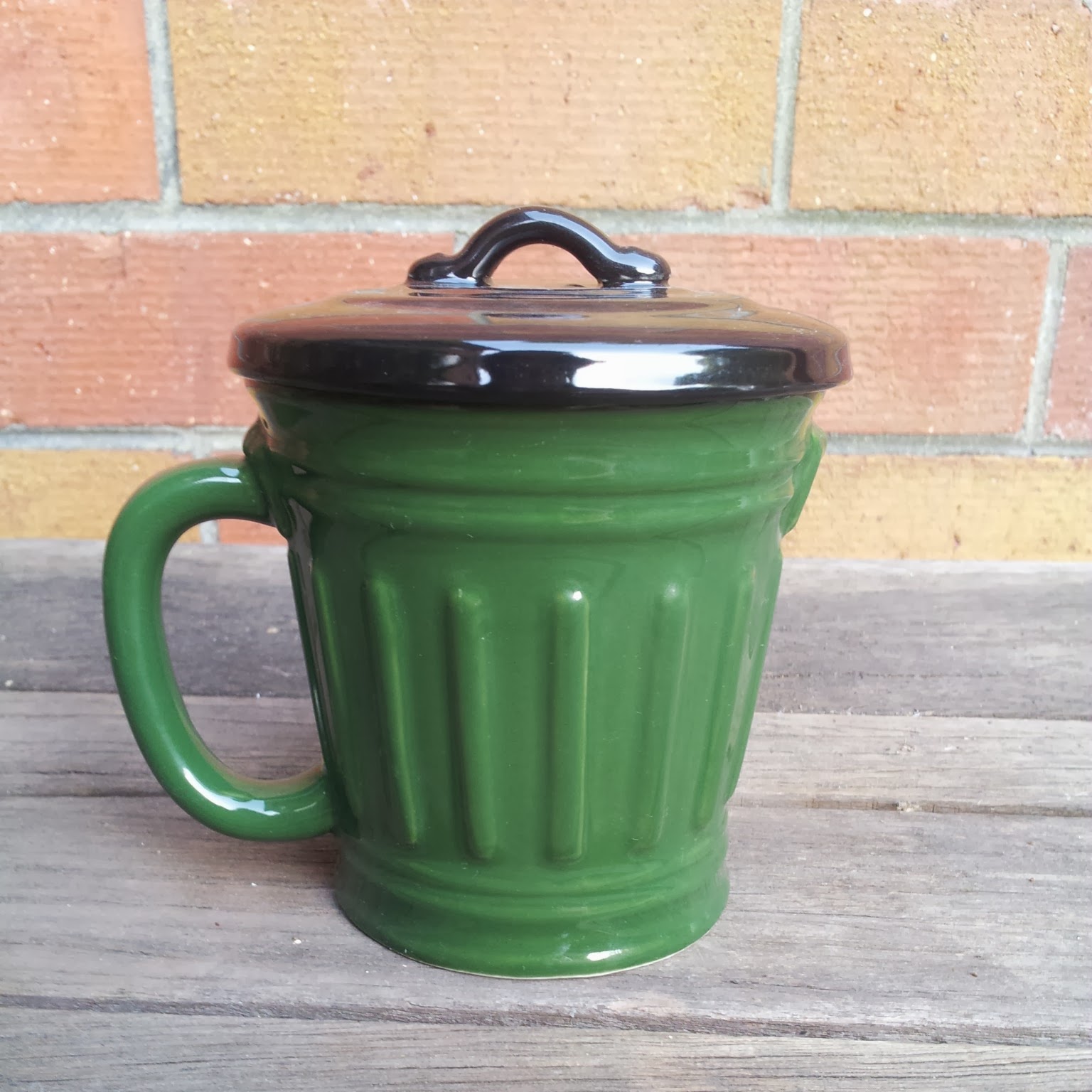 And then I found this mug at Typo. First of all, it's adorable. Secondly, it reminded me of Scott's favourite Muppet. 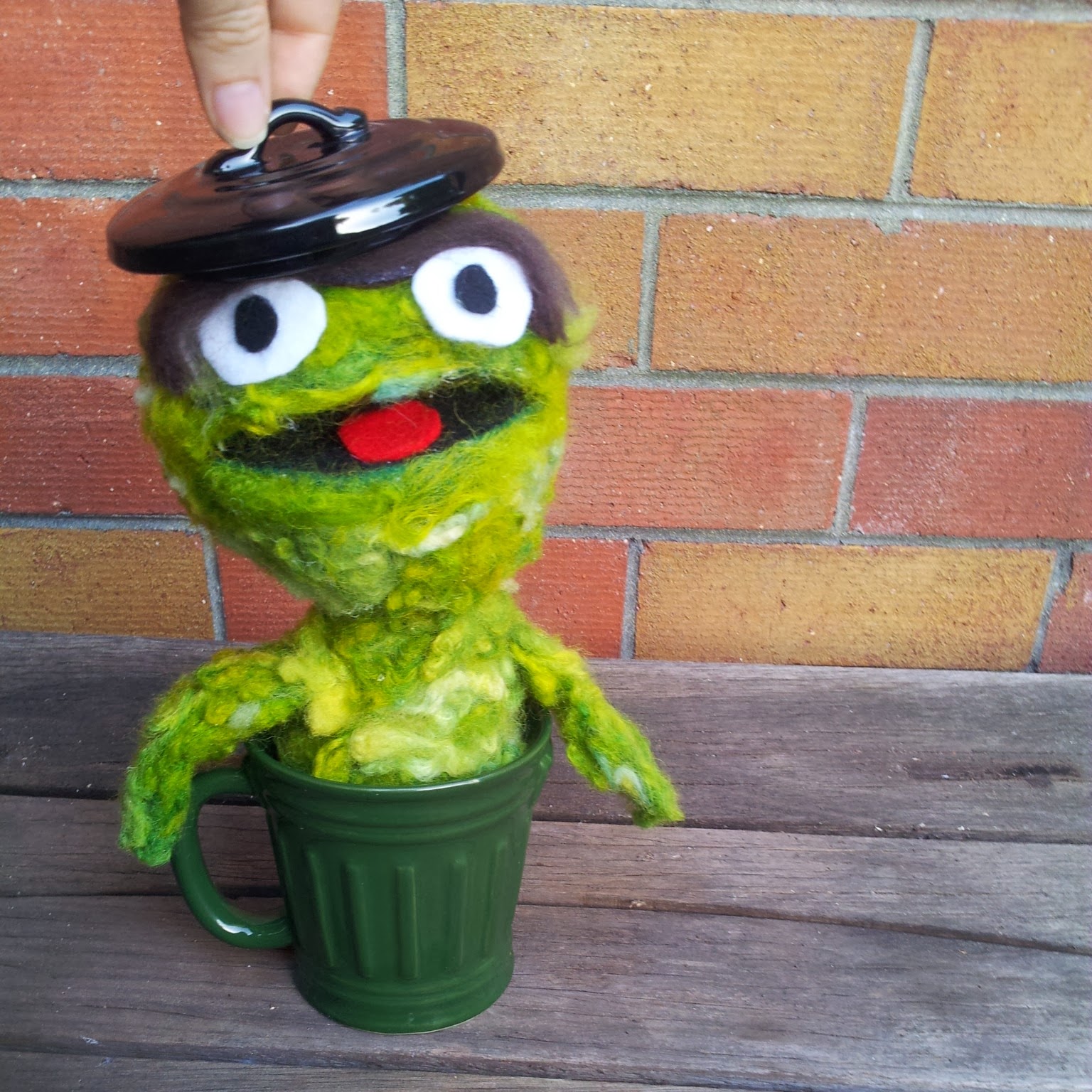 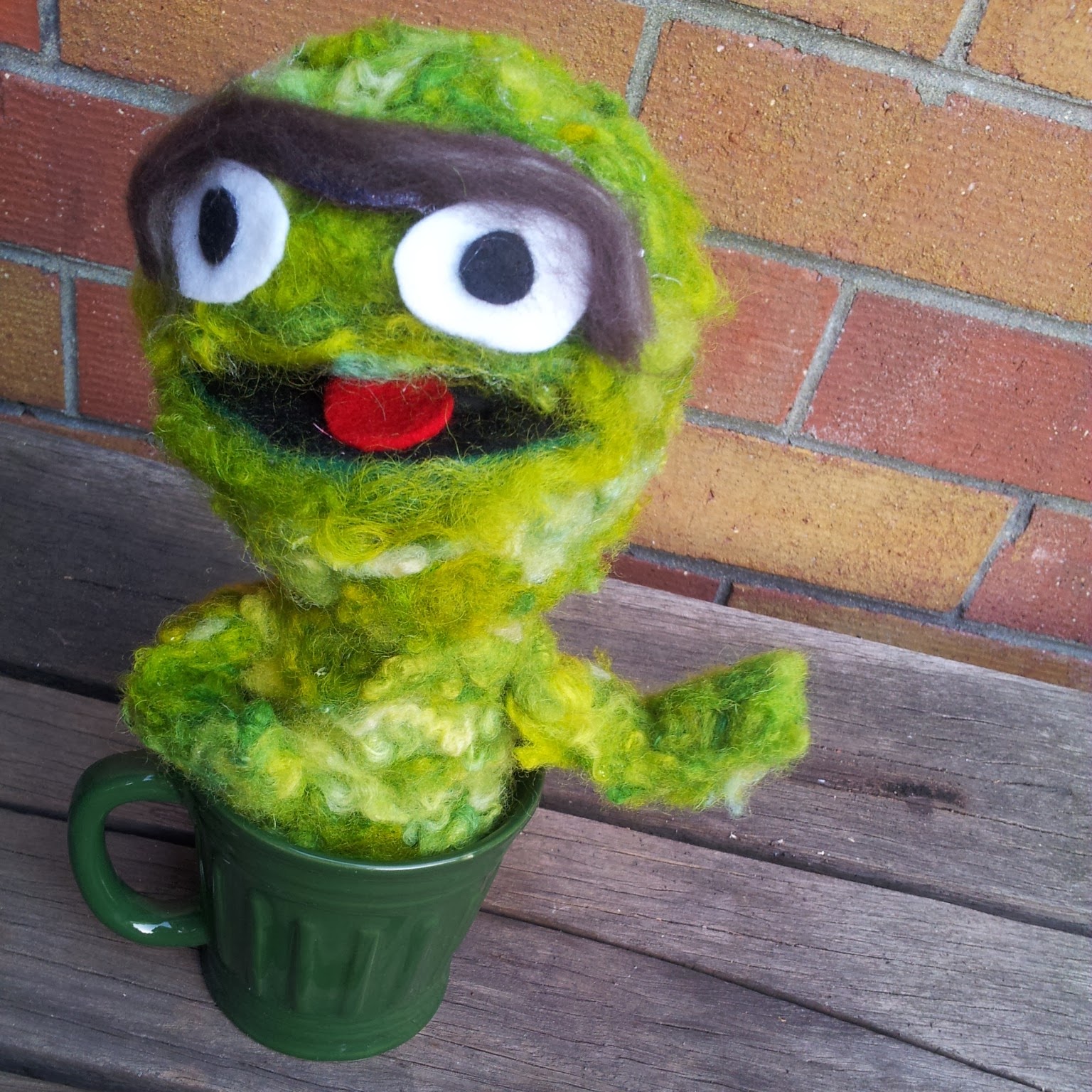 He was so much fun to make, and relatively easy too! He is 25cm tall (while in the mug) and his head is 33cm in circumference; it gives him a more cartoonish look to have a big head I think! ^___^ 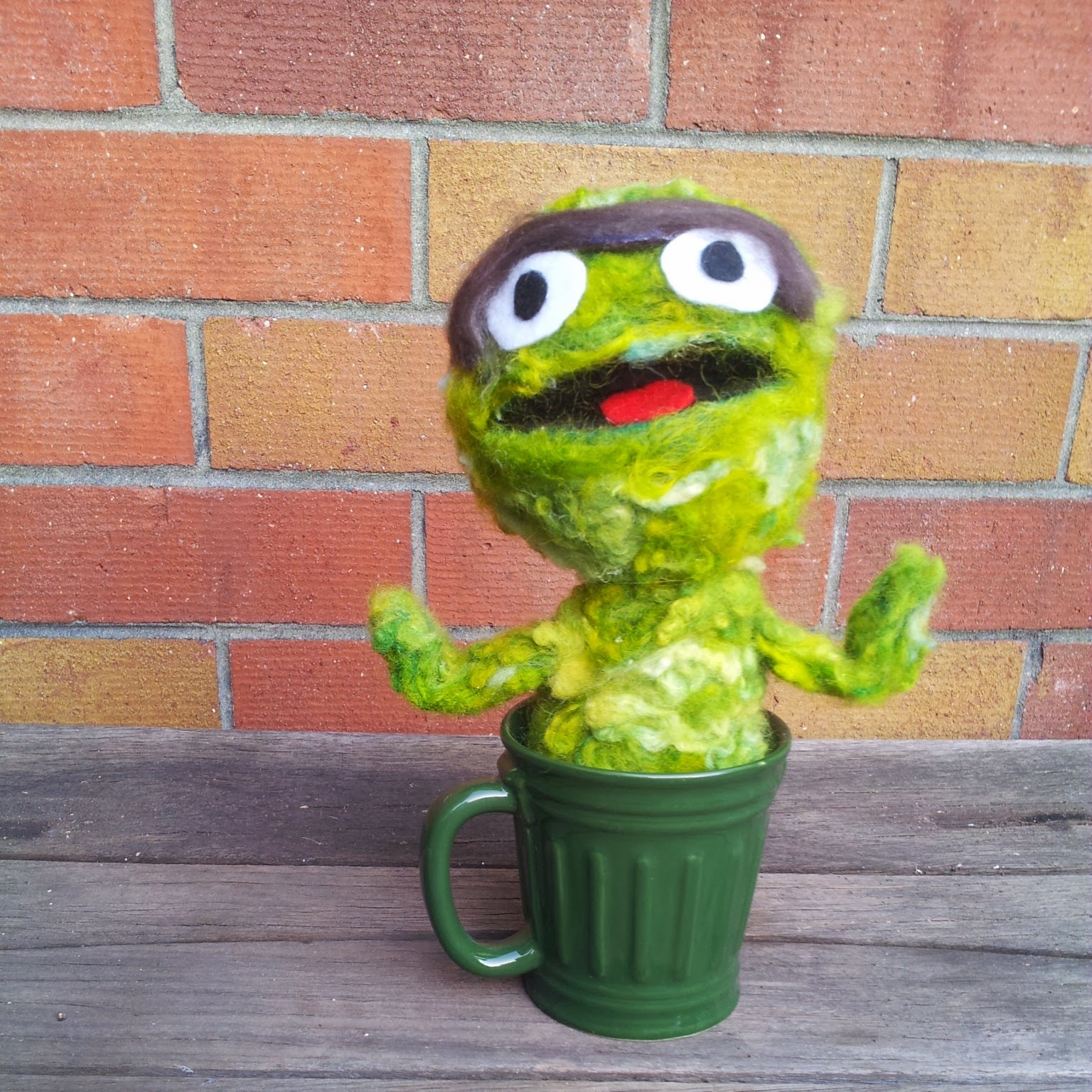 To make him I used one styrofoam ball, one styrofoam cone, felt in green, black, white, red, and brown, fiber in green and brown, one pipecleaner, a needle felting tool, scissors, a hot glue gun, a scalpel, and a plastic spoon. 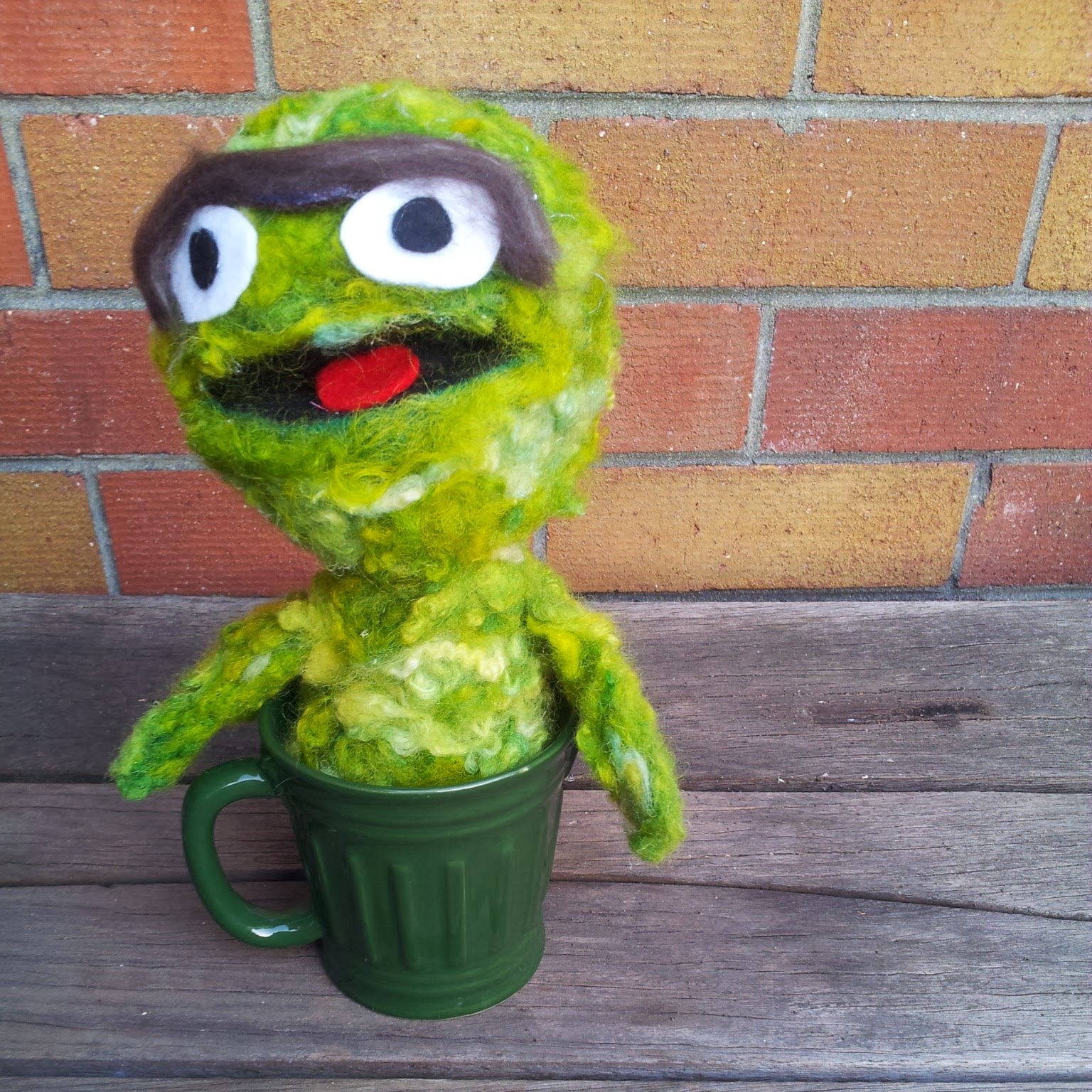 The first thing I did was to use the scalpel to cut the mouth shape out of the styrofoam ball and to cut the bottom and top off the styrofoam cone so that the base was small enough to fit into the mug and the top was flat to rest the head on. 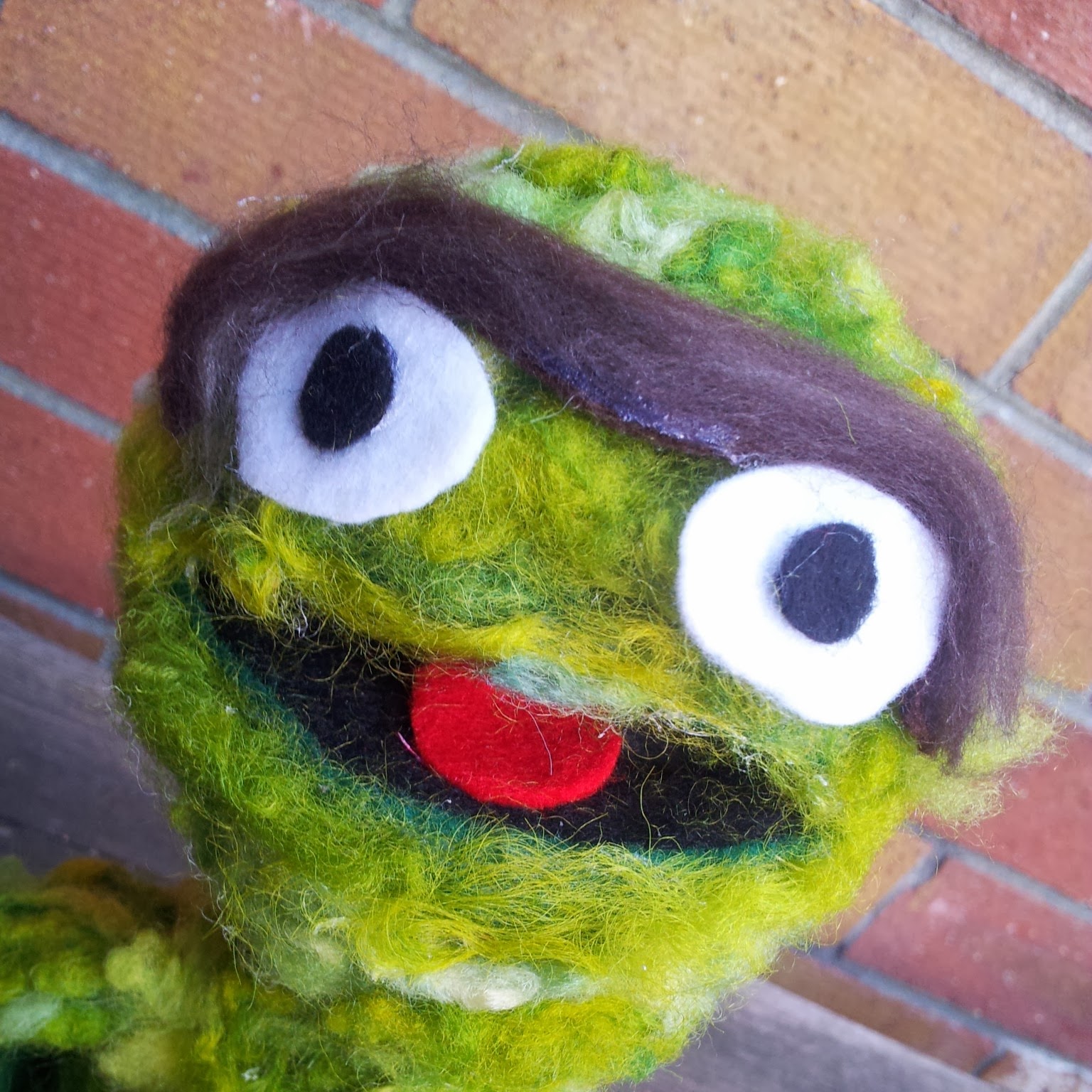 I did the head first, and made quite a few mistakes along the way. Primarily, I used hot glue to attach green felt to the ball as a base for the fiber. Don't do this! If I had have actually thought this through, I would have realised that hot glue sets hard enough to break needles! >___< Because I did that, I had to use hot glue to attach everything on the head. It still looks ok, but I would have liked to have needle felted his facial features and the hot glue meant I couldn't. Instead, I just cut everything out from felt and glued it onto the head. His monobrow is fiber glued to a piece of felt, as I thought by itself it would be slightly patchy. I'm sure that wouldn't have been a problem if I could have needle felted it though. 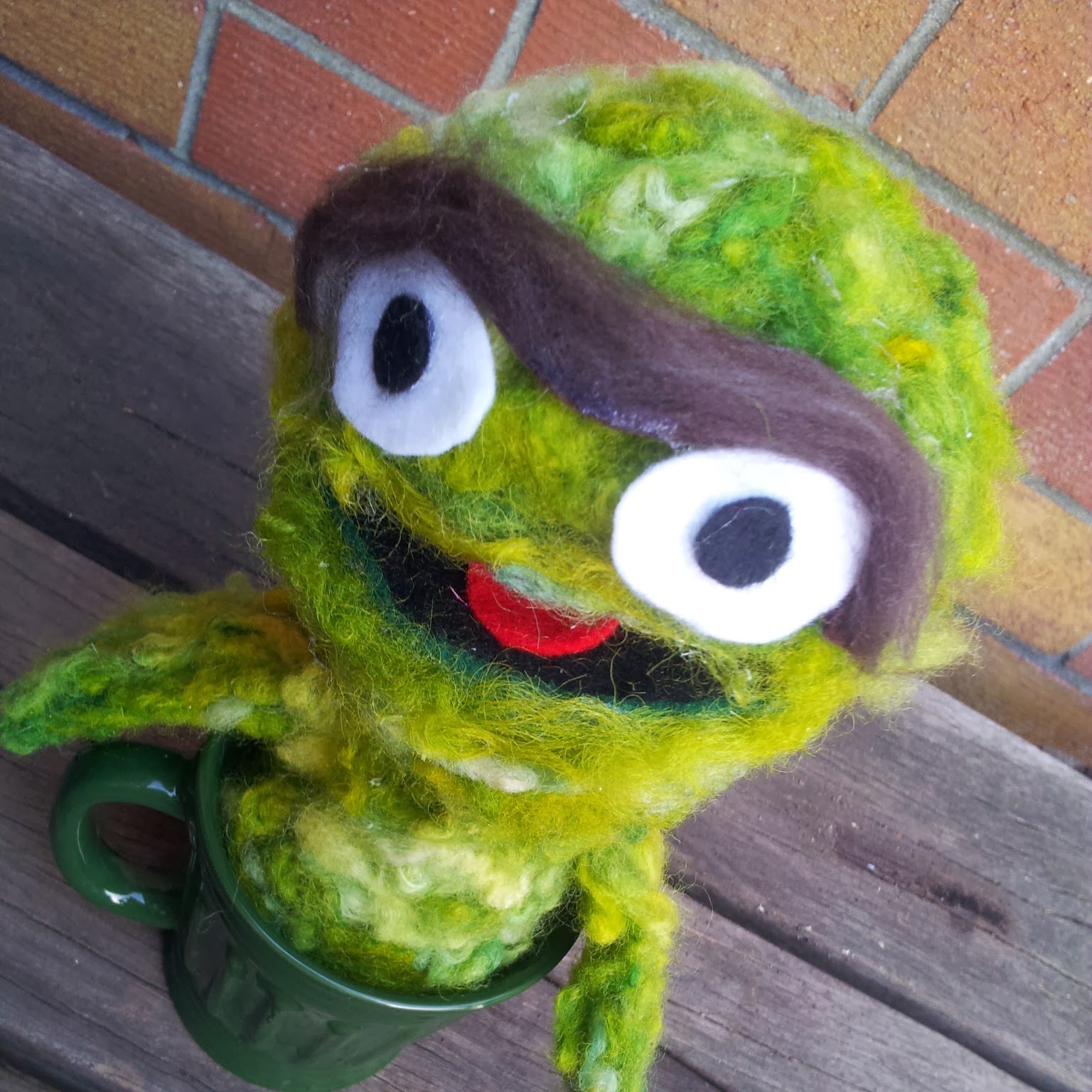 However, I'd learnt my lesson when it came to the body and arms! You can not needle felt fiber directly onto styrofoam, so I still needed a felt base. I wrapped felt around the cone and needle felted the fabric that overlapped. It's not actually attached to the styrofoam in any way, just tightly wrapped and felted around it. Then I needle felted on the fiber. Although local big box craft store had labelled this fiber as "for needle felting", I think it might actually be for wet felting. It doesn't have the same kind of fine consistancy that my other fibers have but, in this instance, it wasn't a problem. If you wanted to make something look really neat you'd be having trouble, but I thought it was good for Oscar to look a bit messy ^___^ 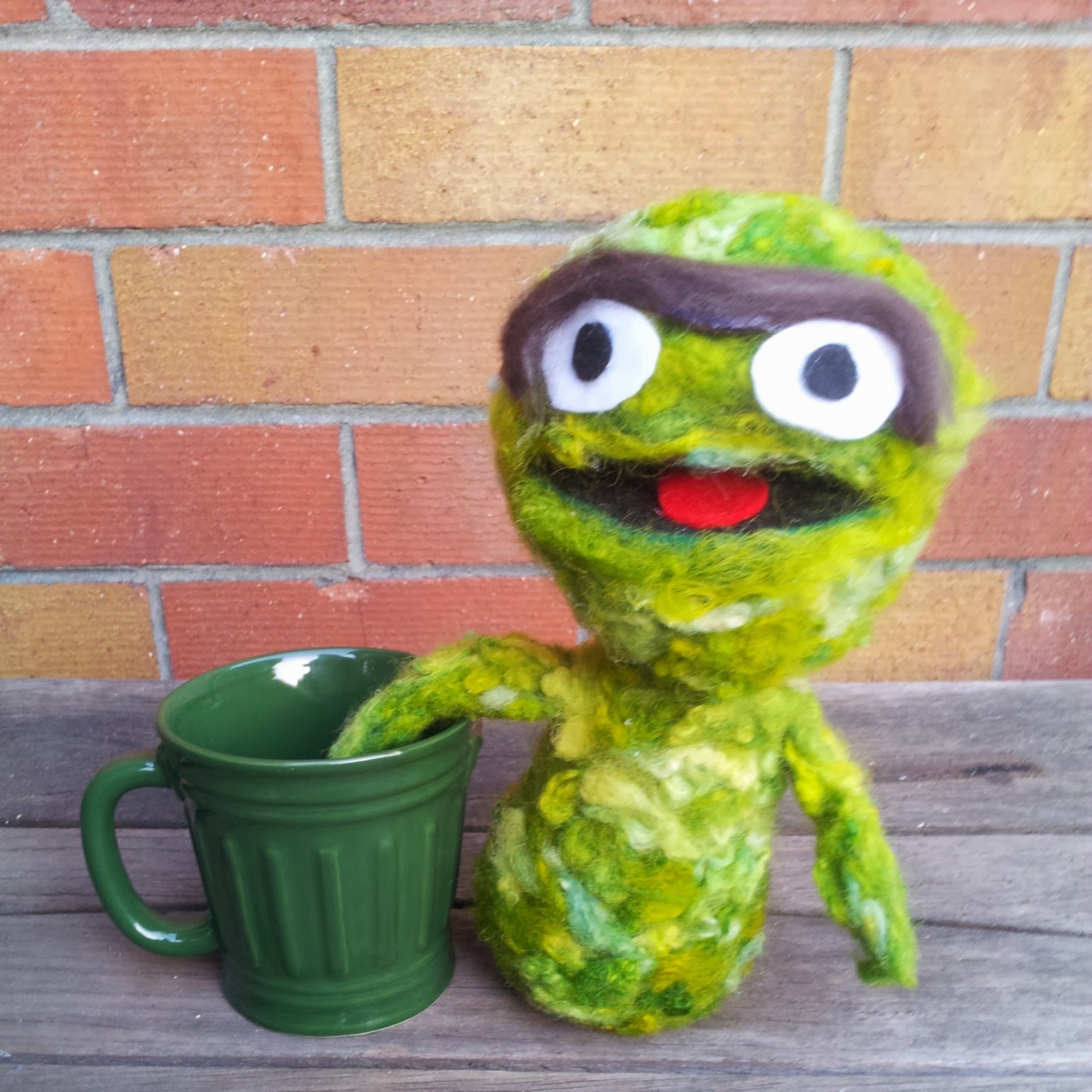 As for the arms, I cut out long strips of felt, needle felted the fiber onto them, and then felted them closed with a small section of pipecleaner inside to make them slightly poseable. If you do this, keep in mind that the wire in the pipecleaner could break your needles, so ensure you only felt around it. I made sure the pipecleaners were shorter than the arms so that I could felt the tops of the arms to the body. 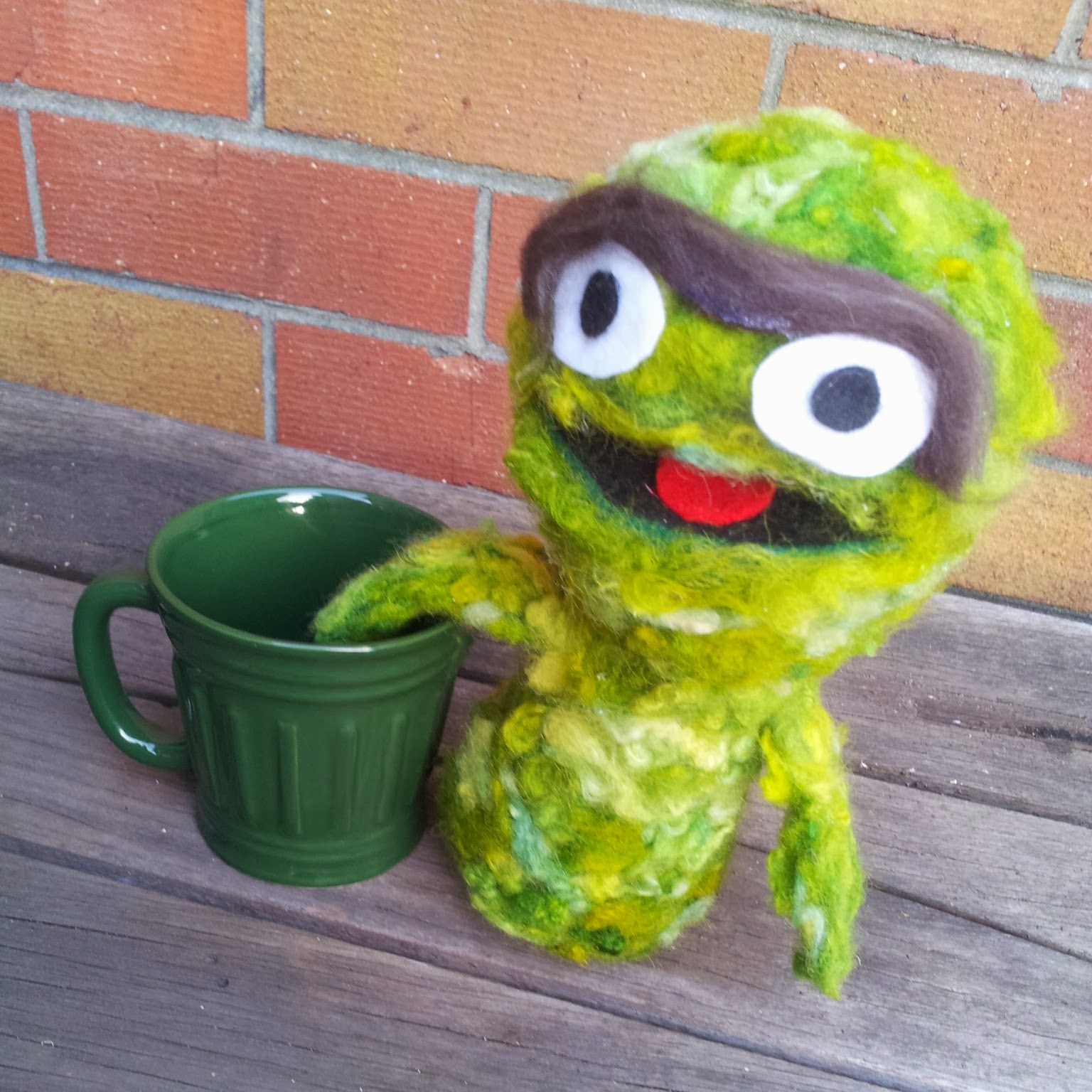 Lastly, I tried to use hot glue to attach the head to the body but it was much too wobbly, and I thought the weight of the head would pull off the fibers from the body. I cut the handle off a plastic spoon and, after using my scalpel to cut through the fiber and felt, inserted it into both the head and the body. It worked really well - that head isn't going anywhere! ~___^ 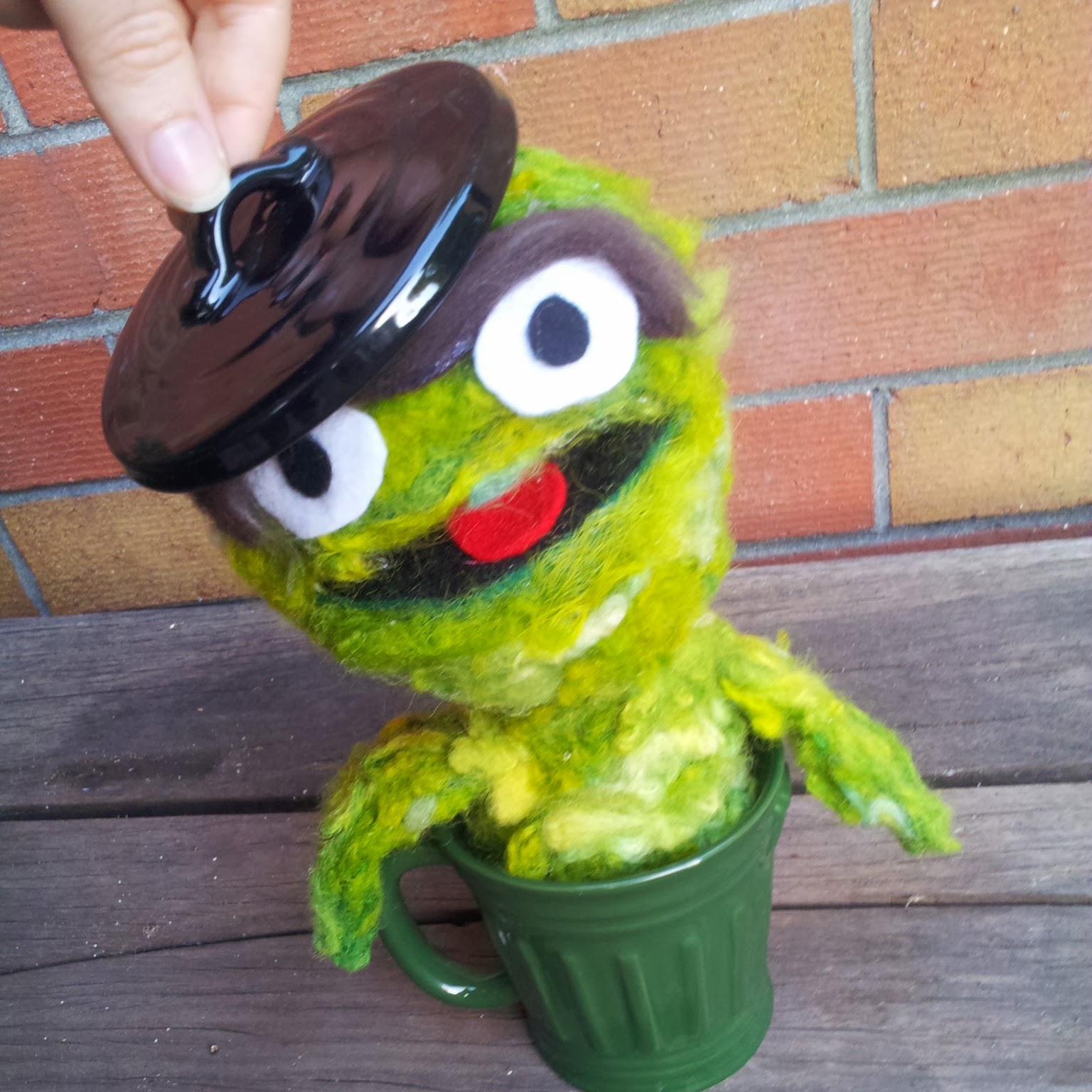 And that's that! ^___^ I'm pleased with how he turned out, but now I want to give proper needle felting a go! Have you done any needle felting? What did you make? I think I better start with something easy, so I'd love your suggestions! ^___^

cute! you are a master of all the crafts!

i must get one of these mugs from typo...

hope scott got you something nice!

Thanks Robbie! The first thing I made with needle felting was a droopy looking dragonfly - it looked awful! But this project was so easy because the styrofoam provided the basic shape and I was really just using the fiber to cover it up ^___^

I can't believe you made him!!!! So amazing. I love his little face. You are so talented.

Awww, thanks Nerd Burger! He's got a pretty cute little face for a stinky grouch! ~___^

Oh my, you made that yourself?!?!? That's amazing! He looks so cuuuuuute :) he reminds me of my childhood as well :)