Hello! Oh my glob, this project has been a long time coming! I was meant to post this yesterday but I totally forgot that it gets dark here at like five now, and so I didn't finish in time to take photos! >___< But I remembered today - hurray! I'm keeping up my (admittedly fairly new) tradition of making a project every year for International Star Wars Day and this year I decided to make a cute little Wicket the Ewok cushion ^___^ 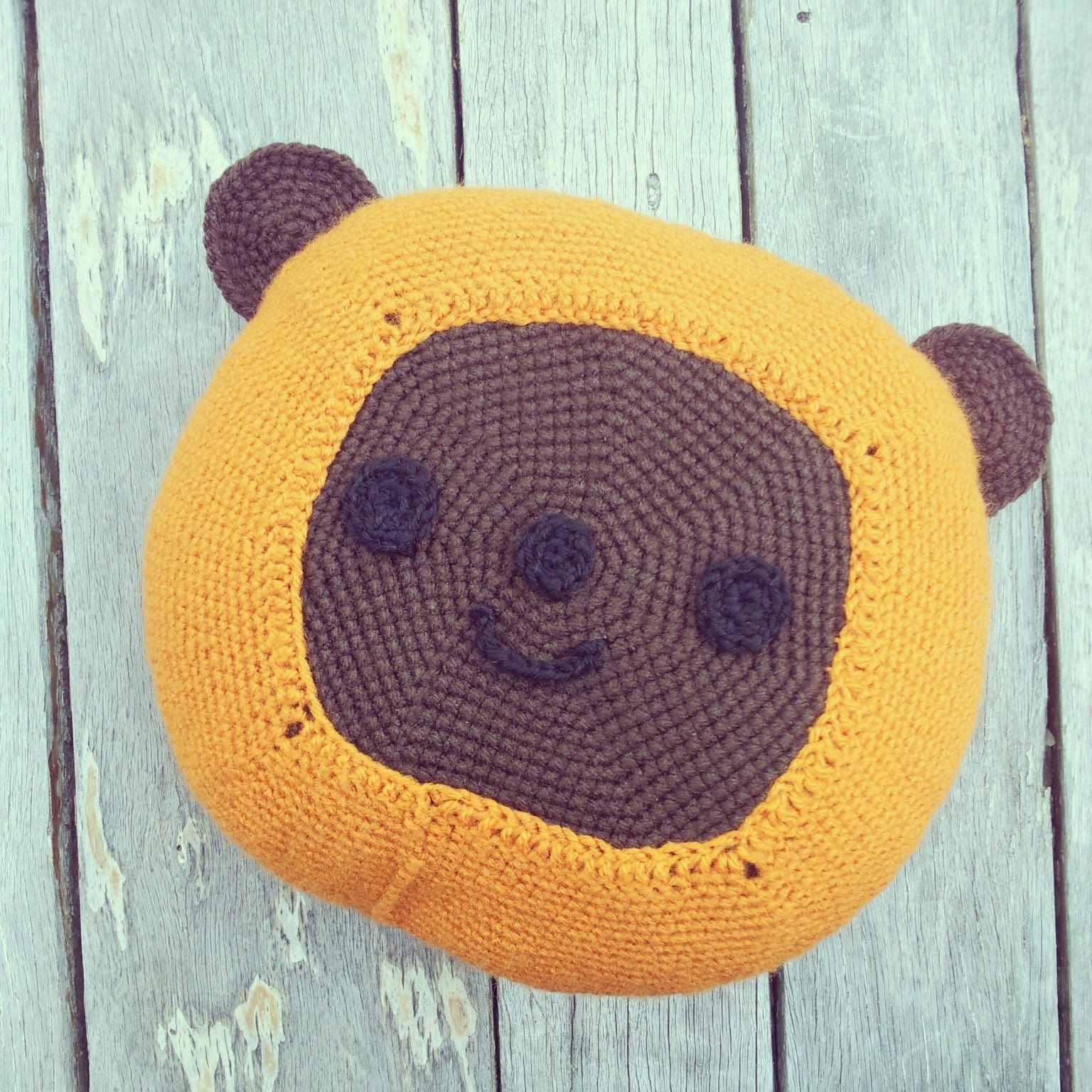 Now, to be perfectly honest, I find Wicket to be a little bit creepy looking, so I didn't want to make anything too true-to-life (or, ahem, movie). I simplified the design to be as cute as possible and I think it rather worked! 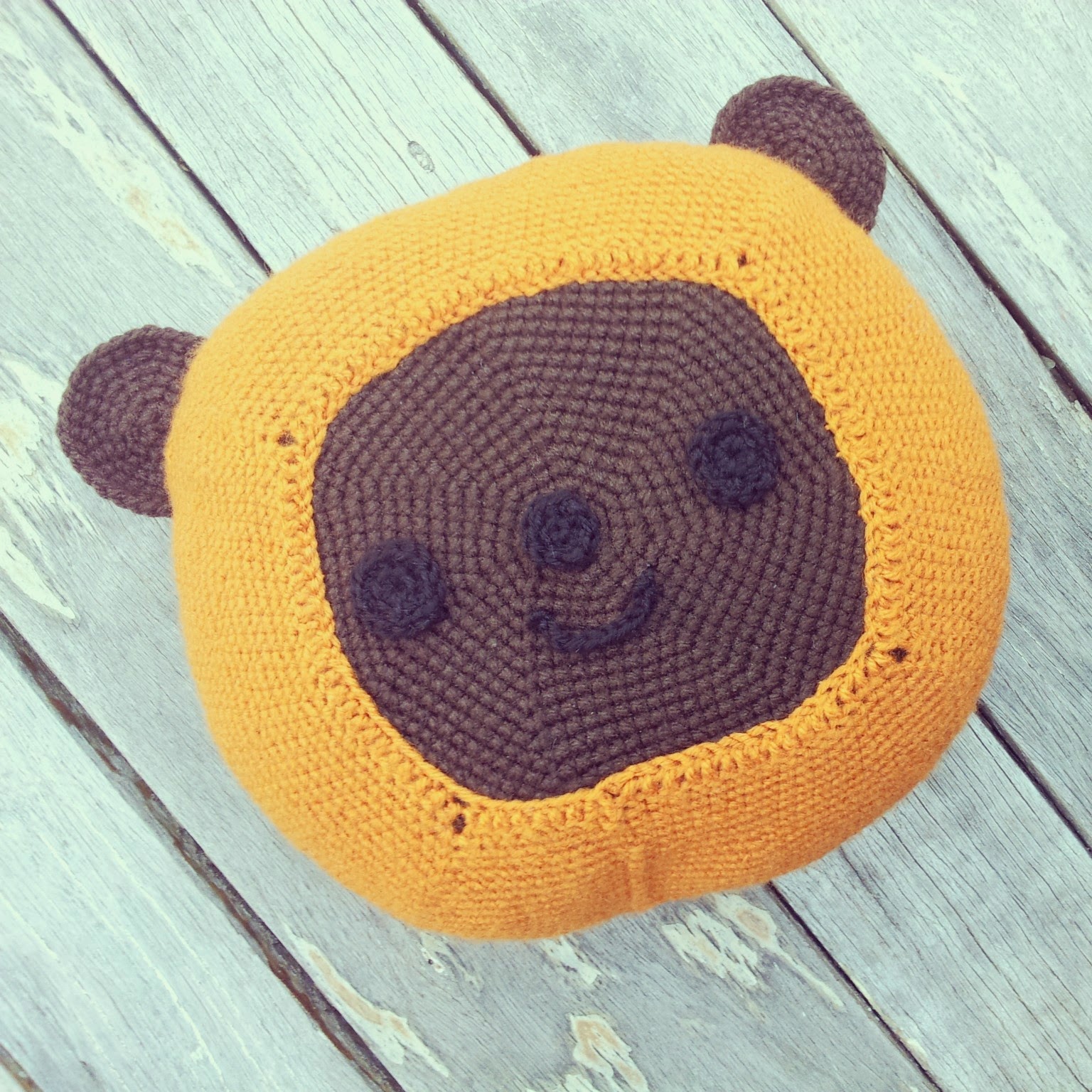 I used stash yarn to make this, although I'm not sure of the brands (I have a bad habit of throwing away labels as soon as I start using a new ball) I'm pretty sure it's 100% acrylic. I used the majority of two balls of brown and orange, and a tiny bit of black. 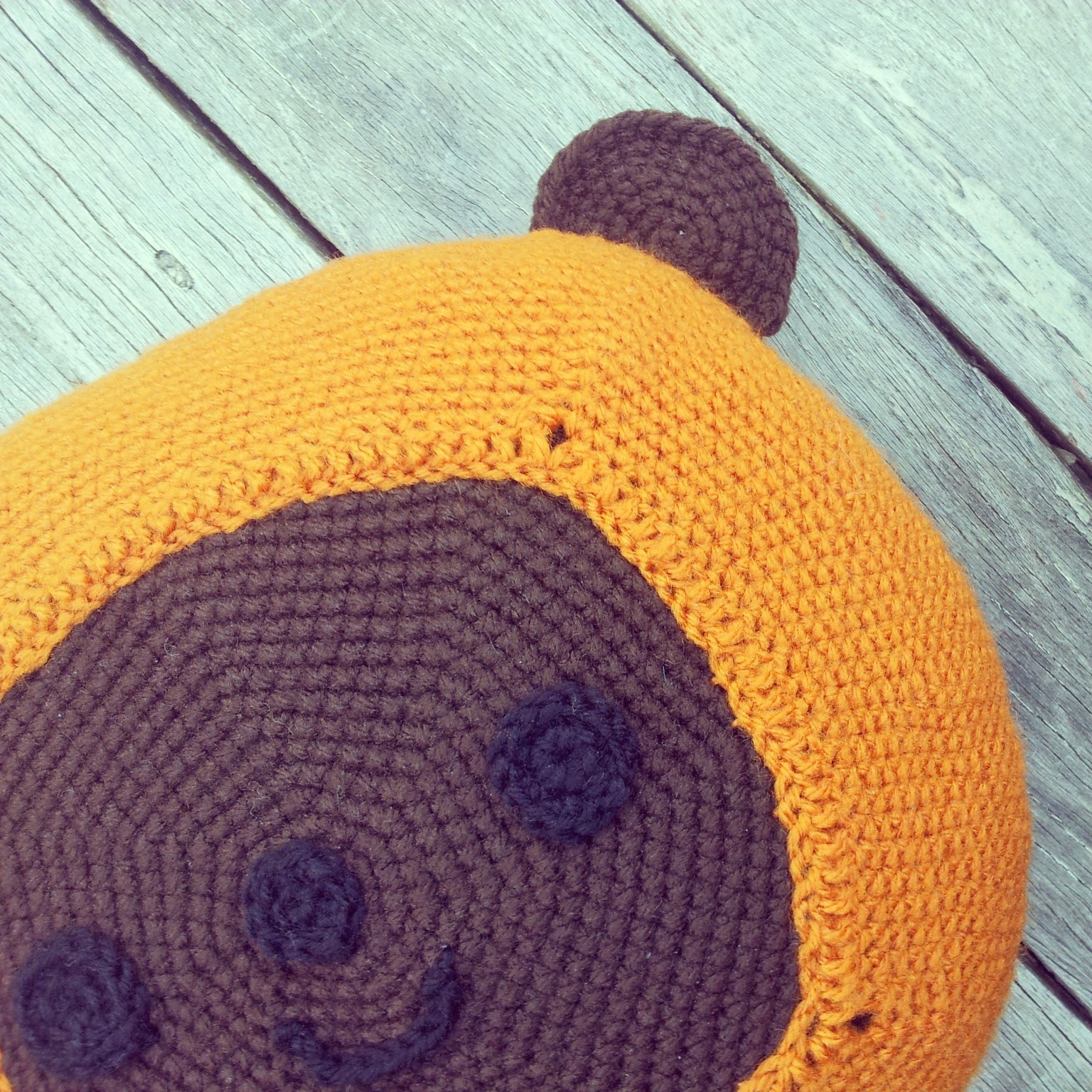 To make it, I crocheted one large flat circle and two small flat circles in brown, and one large flat ring in orange. For the orange ring I started off by chaining to the length I wanted, joining that chain into a ring and then doing the treble stitch into each each chain stitch. I wanted the opening around Wicket's face to make mostly square shaped, so I made four corners by doing a treble, two chains, and then another treble into one chain stitch.  After that first row, I switched to single stitch and eventually rounded out the square shape into something more circular. Everything else I did in 100% single stitch which I think gives it a great look and also prevents the stuffing from popping out. 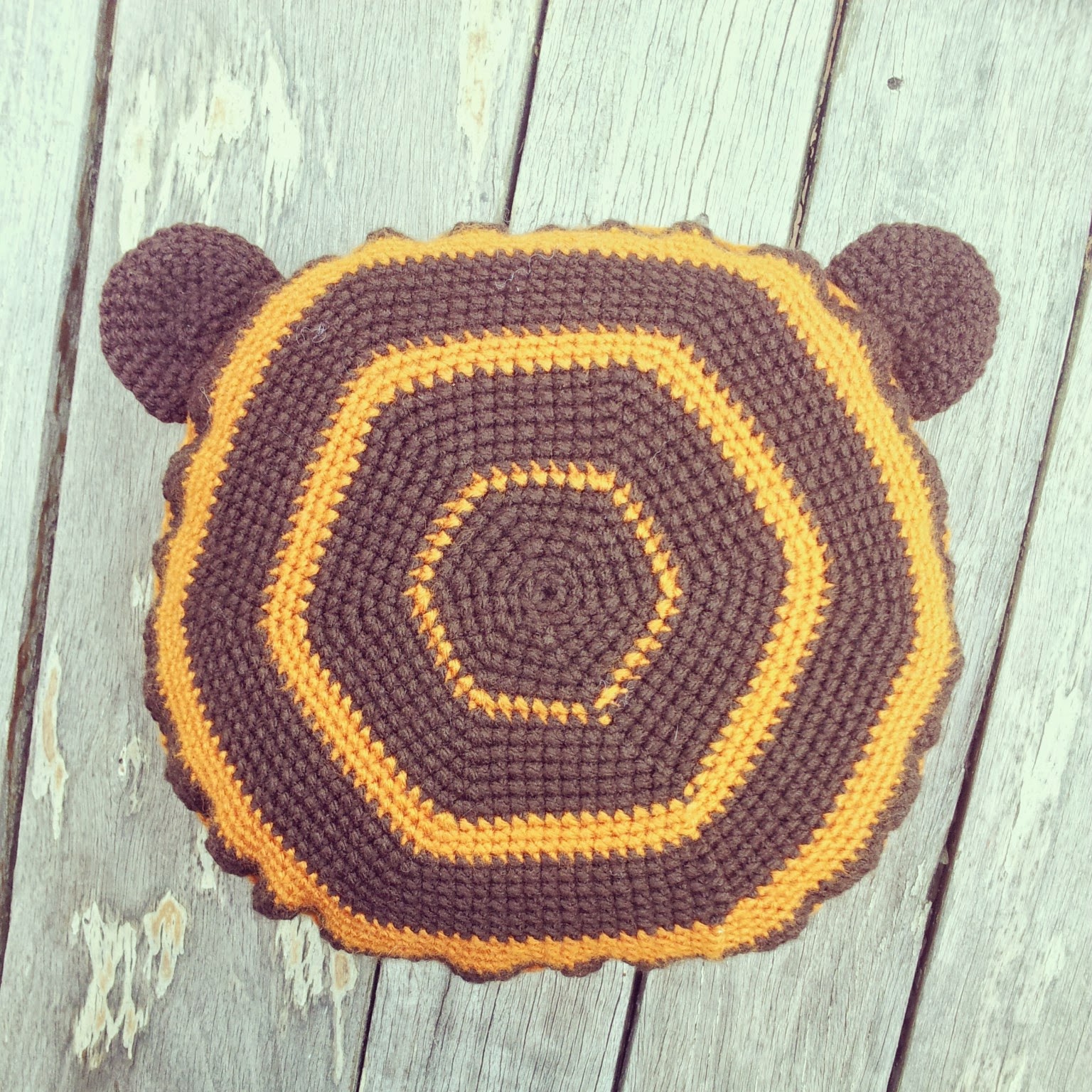 By the time I got to making the back piece, I was running out of orange but I didn't want a plain brown backing so I ended up doing a striped hexagon. Hexagons are harder to make into circles than squares, and the edges ended up a little ruffled, as you can see from the picture above. Still, I like how it turned out! ^___^ 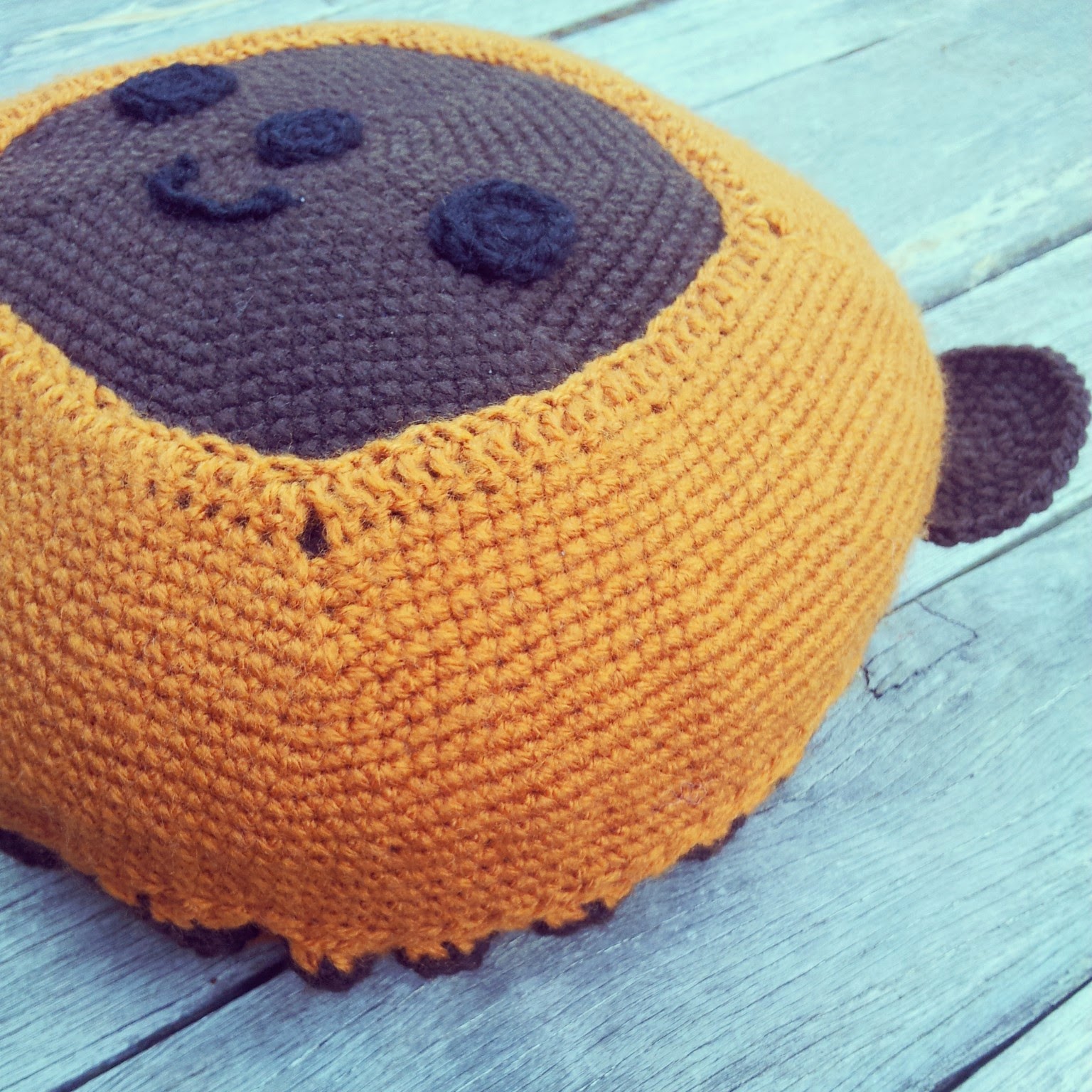 His face was made by making three circles, one a little smaller than the others, and a short length of chain. I stitched everything down with some extra black wool. The orange ring is bigger than the brown head piece, so it covers up the base of the ears, which are just stitched to the brown piece. The orange ring was sewn down around both the edge of the face and the head and then sewn to the back piece with the last precious piece of orange wool. I ended up with only a tiny little bit left - I certain succeeded in using up that particular piece of stash! 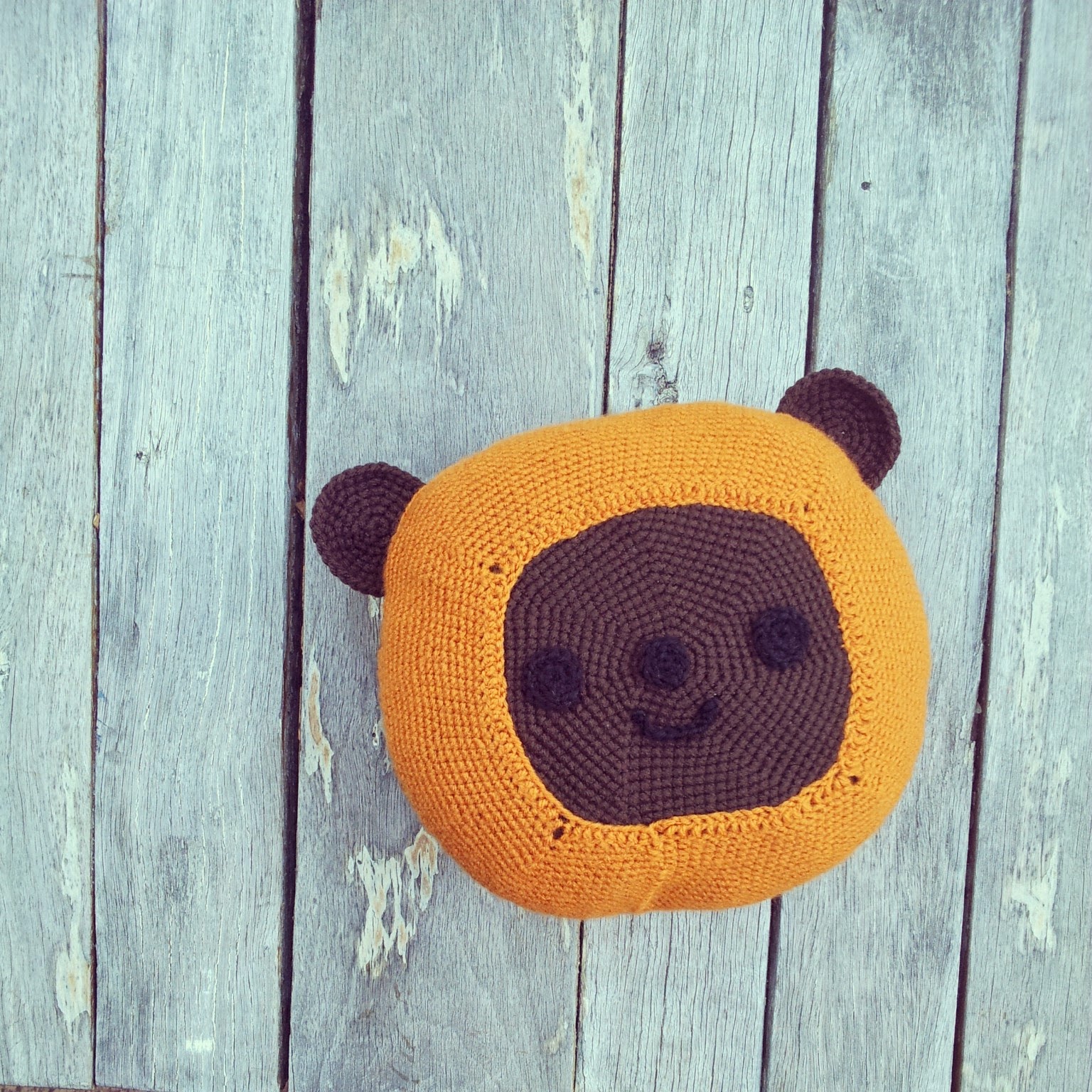 And now he has found a home on our couch! Basically all the stuffed toys I make seem to end up on the couch so he won't be lacking for company but I'm thinking that this idea could be really easily adapted for other Star Wars characters. Wampa head cushion, anyone? 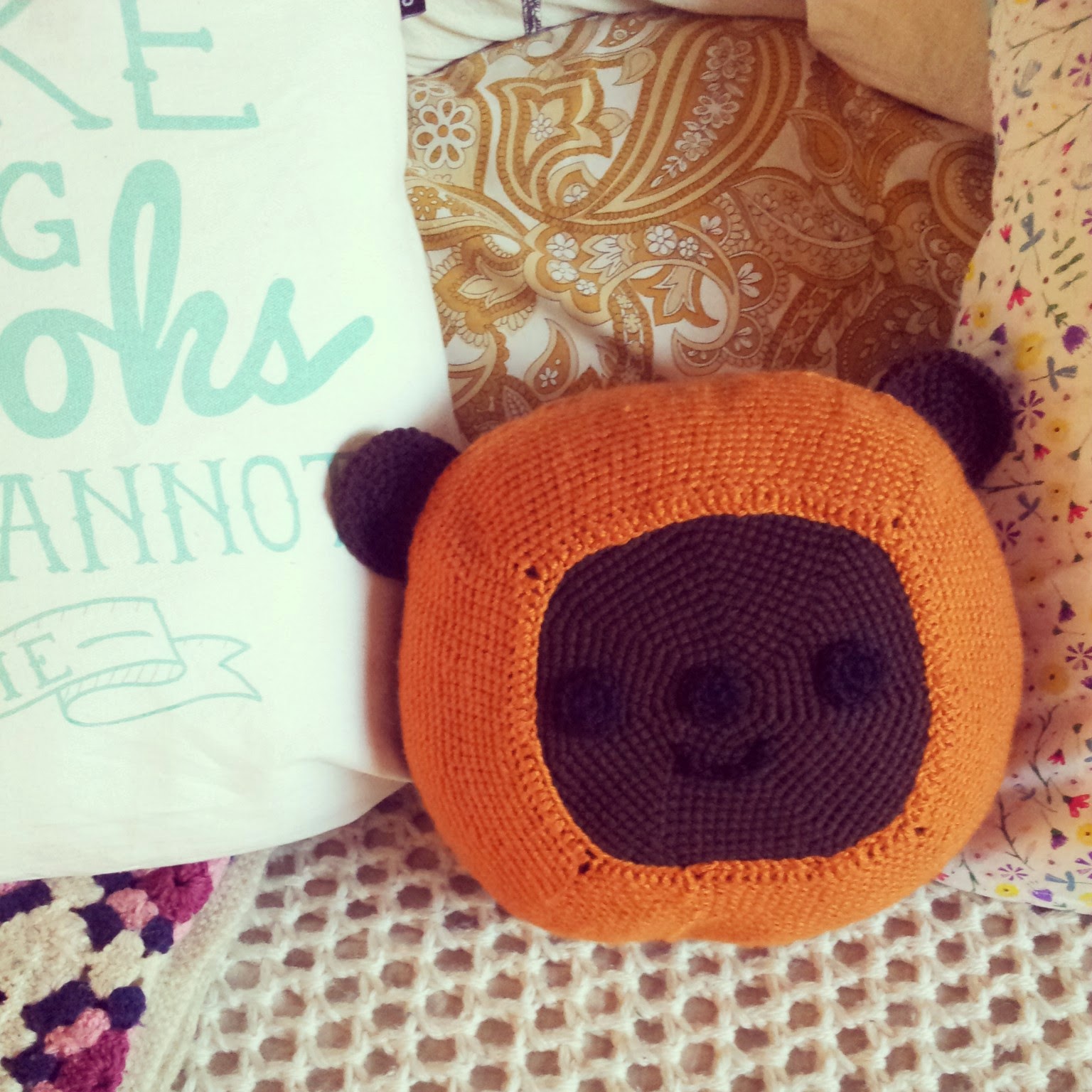 International Star Wars Day is only four days away (!!!) and it's also my best friend's and my husband's birthdays so I've got to get right back to crafting! Scott has requested a Companion Cube plushie and I'm working on a super secret gift for Pip which is out of this world ~___^

Let me know if you're making or doing anything fun for Star Wars Day and May the Force with with you! ^___^

OMG!!!! That is freakin awesome!

this is so cute! next time i get a round pillow form I'm making this!

Thanks Alycia! I was very tempted to buy a pillow form for this project, but since I'm trying not to buy more craft supplies I used toy stuffing instead. It seems to have worked out pretty well though! ^___^

Heehee! This is so cute :D
PS. thanks for visiting my blog, seems we're both Star Wars fans :)

Thanks for visiting me too, Pops de Milk! I love Star Wars Day, because I always get to see so many cool new projects! ^___^ May the Fourth be with you!

this is freaking gorgeous, I knew who it was immediately!

Thank you Tanya! I'm quite pleased you could tell it was mine, I always really admire crafters who have a distinctive style ^___^