Death Before Decaf hoop and a Welcome to Night Vale Cake


Last Wednesday was the birthday of one of my most bestest friends, Miss Rebecca. Of course, this meant that a celebration was in order so I texted her asking what flavour cake she would like. I got back "surprise me! But not spiders" and so promptly decided that spiders must be somehow involved (I am cruel in that way). This, in my mind, transformed into spider wolves and from there it was pretty obvious (well, to me anyway) that the cake should be Welcome to Night Vale themed. 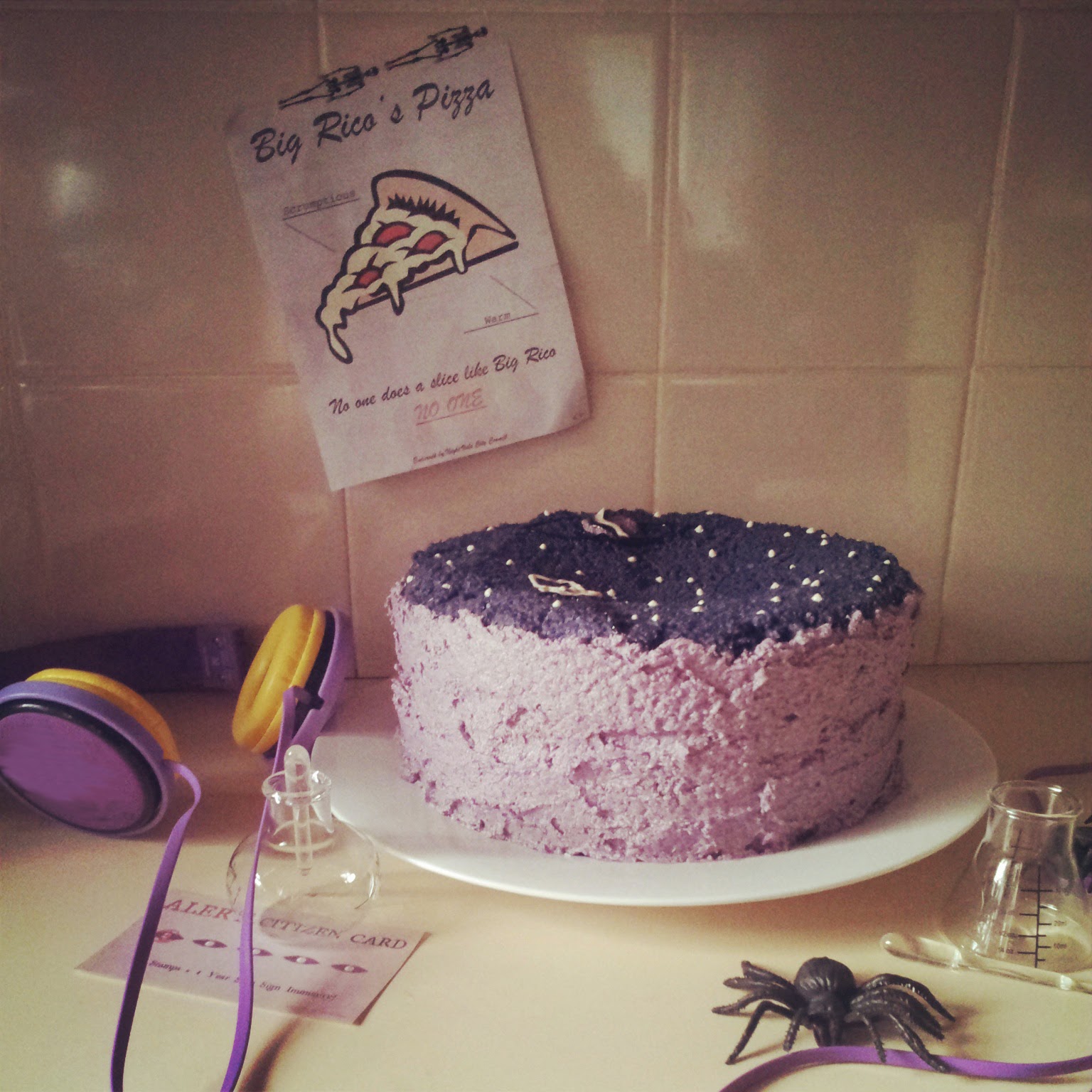 I do not have a good history of cake making. I think this is mostly because I almost always try to make them too quickly. This means that my cakes are often crumbly, half stuck in the pan, and have a melted look because I tried to ice them without waiting for them to cool down. But not this time! I used my recipe for Anzac Cake but doubled it and made two round cakes. I made two because I was worried one of them would turn out awfully, but, as luck would have it, they both made it out of the oven with only minimal sinking in the middle. 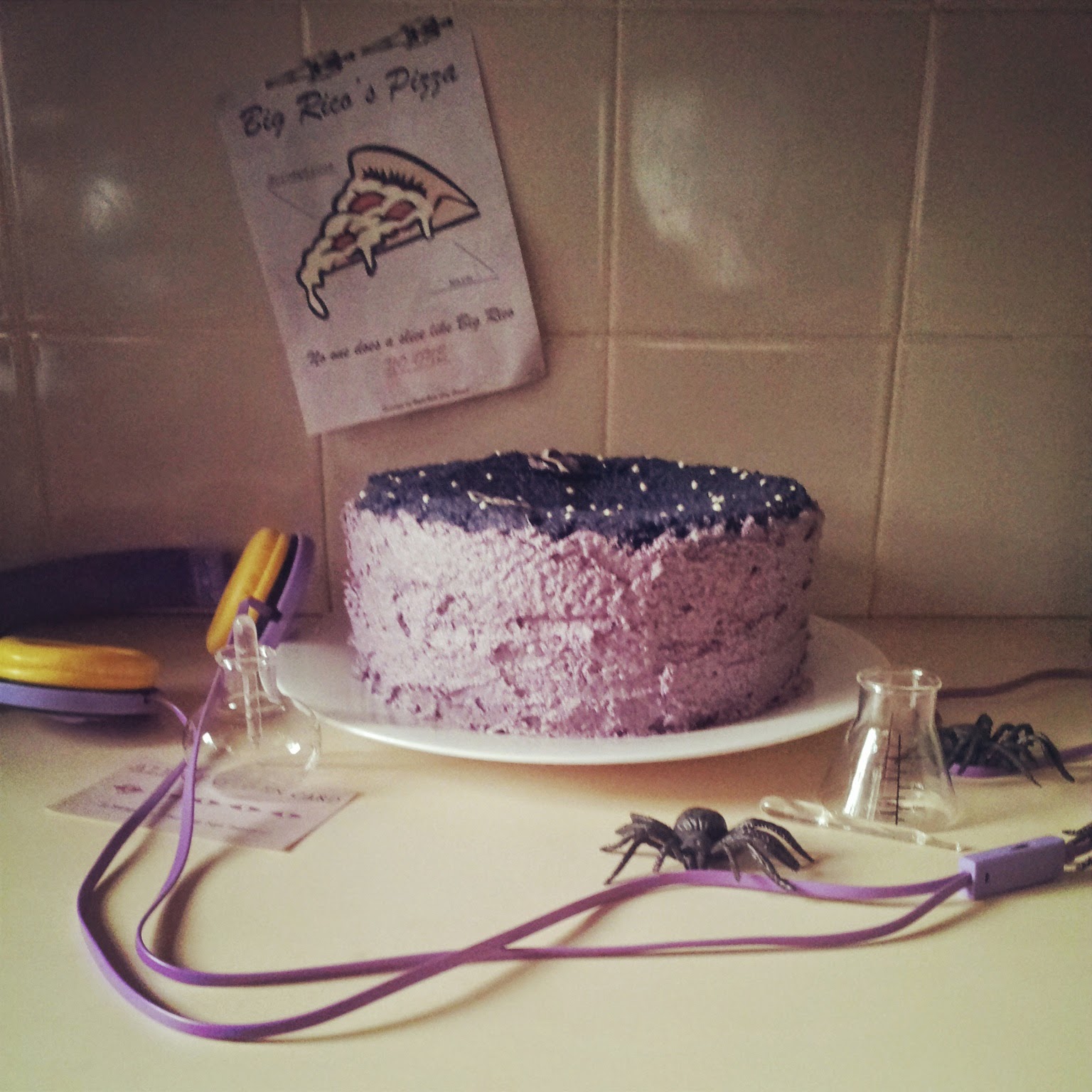 I went all out on greasing and lining the pans with baking paper and, lo and behold, both of the cakes were removed from the pans without breaking in half! This is a minor miracle in my kitchen. I let them cool overnight, and then returned with grand icing plans. 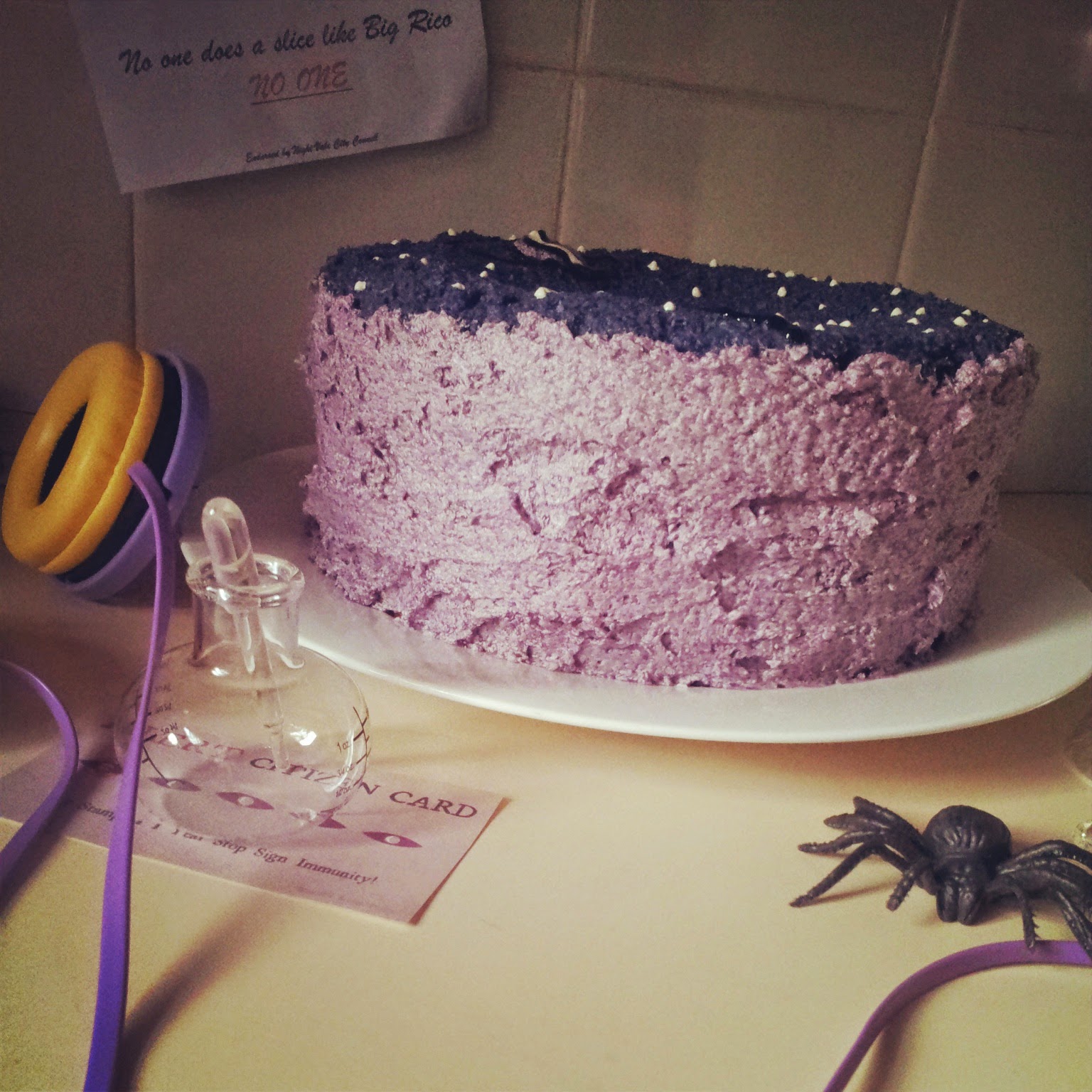 Since both the cakes were looking lovely, I decided to use both of them; so I made some coconut icing (desiccated coconut + icing sugar + water) which I added between the two cake layers. It's probably fair to mention at this point that this cake is not diabetic friendly - I had to take a lot of insulin to eat a slice, but it was totally worth it ~___^ 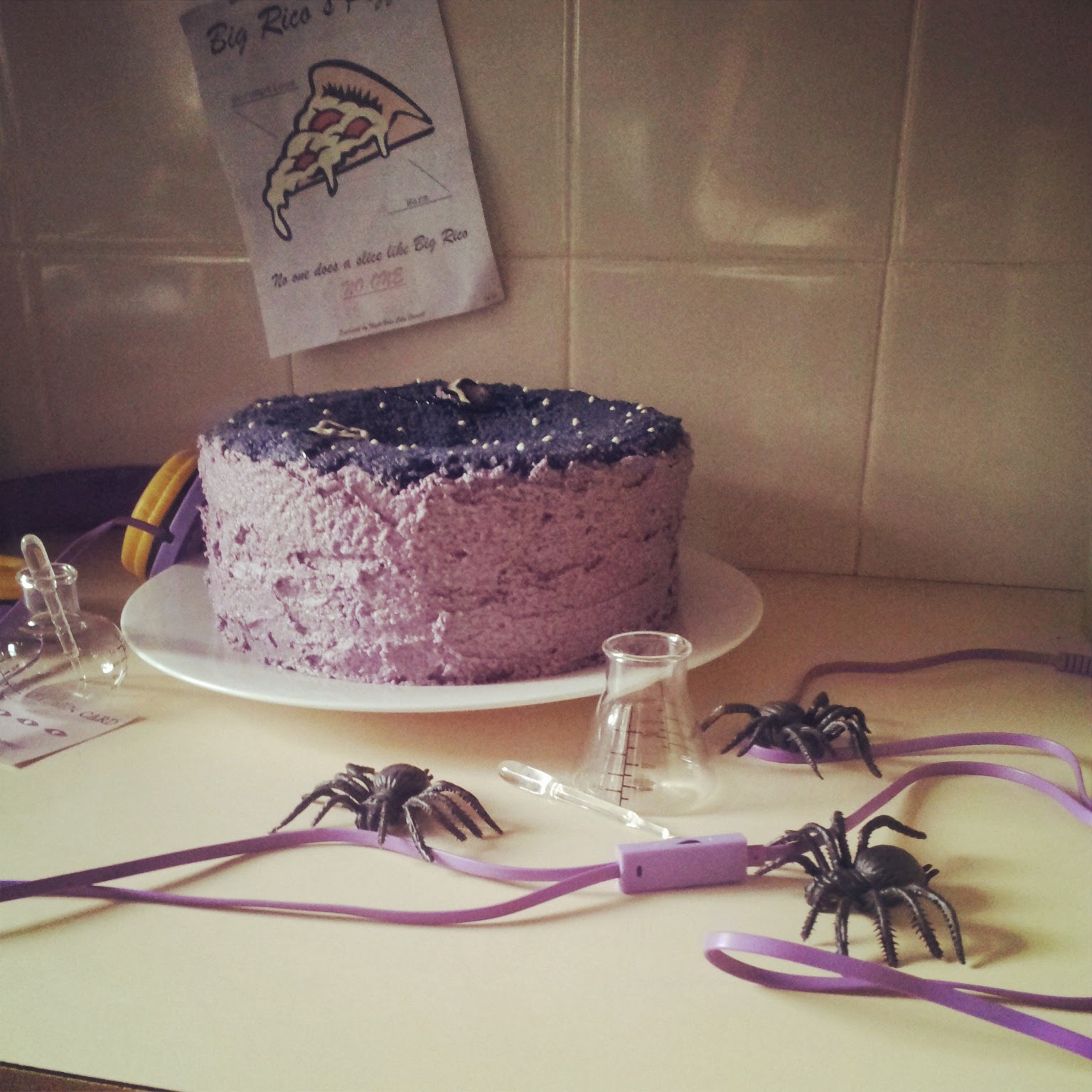 The icing on the top of the cake is the same coconut icing, but made purple with the help of some blue and pink food colouring. This icing is pretty thick but is only really good for flat surfaces; it will just fall off if you apply it to the side of a cake. 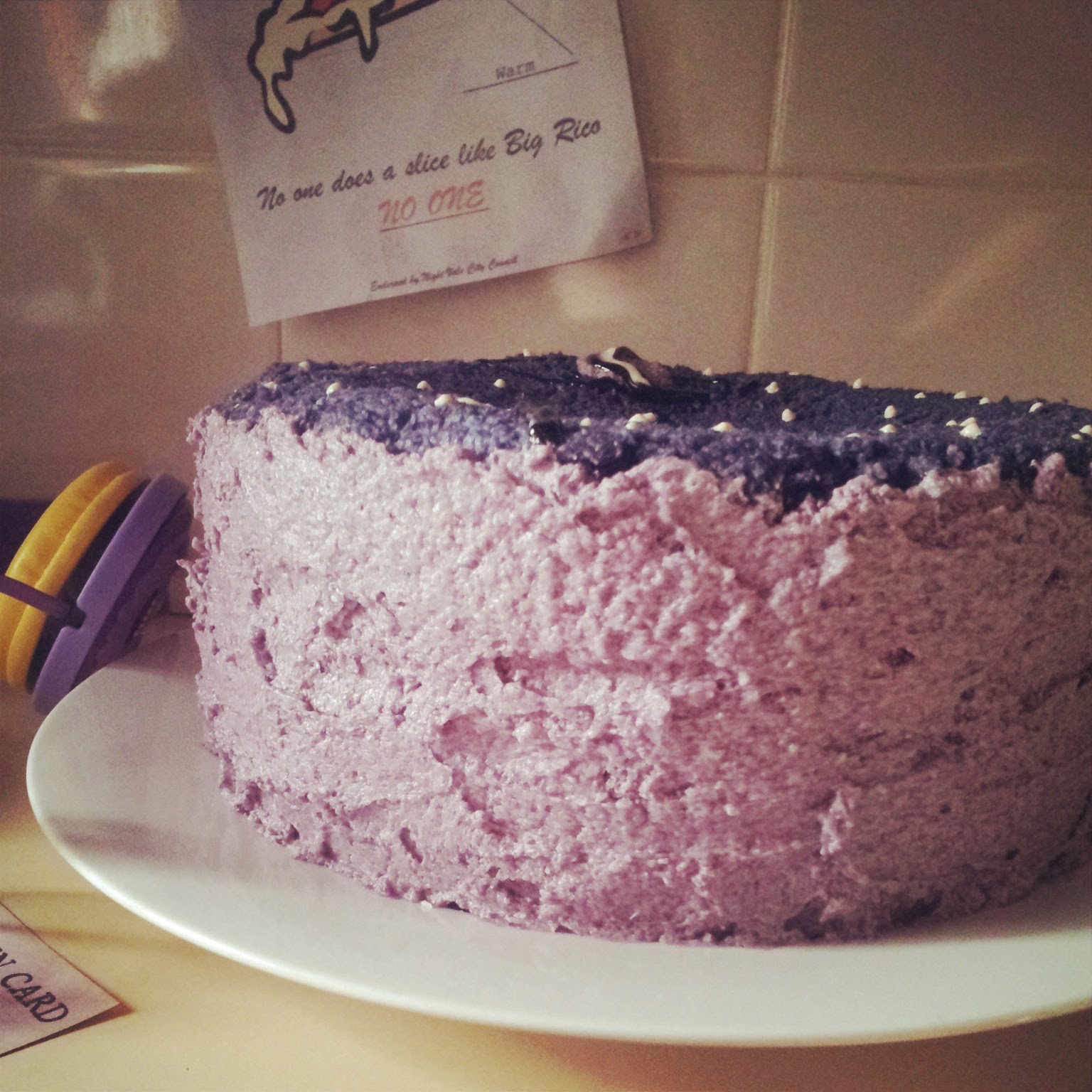 So for the sides I made another batch of icing; coconut + icing sugar + water + unsalted butter, which I mixed with an electric beater until it was fluffy. I added food colouring again, but made this batch lighter so that the finished cake would have some contrast. I used a butter knife to apply it; I really love the textured look I ended up with. 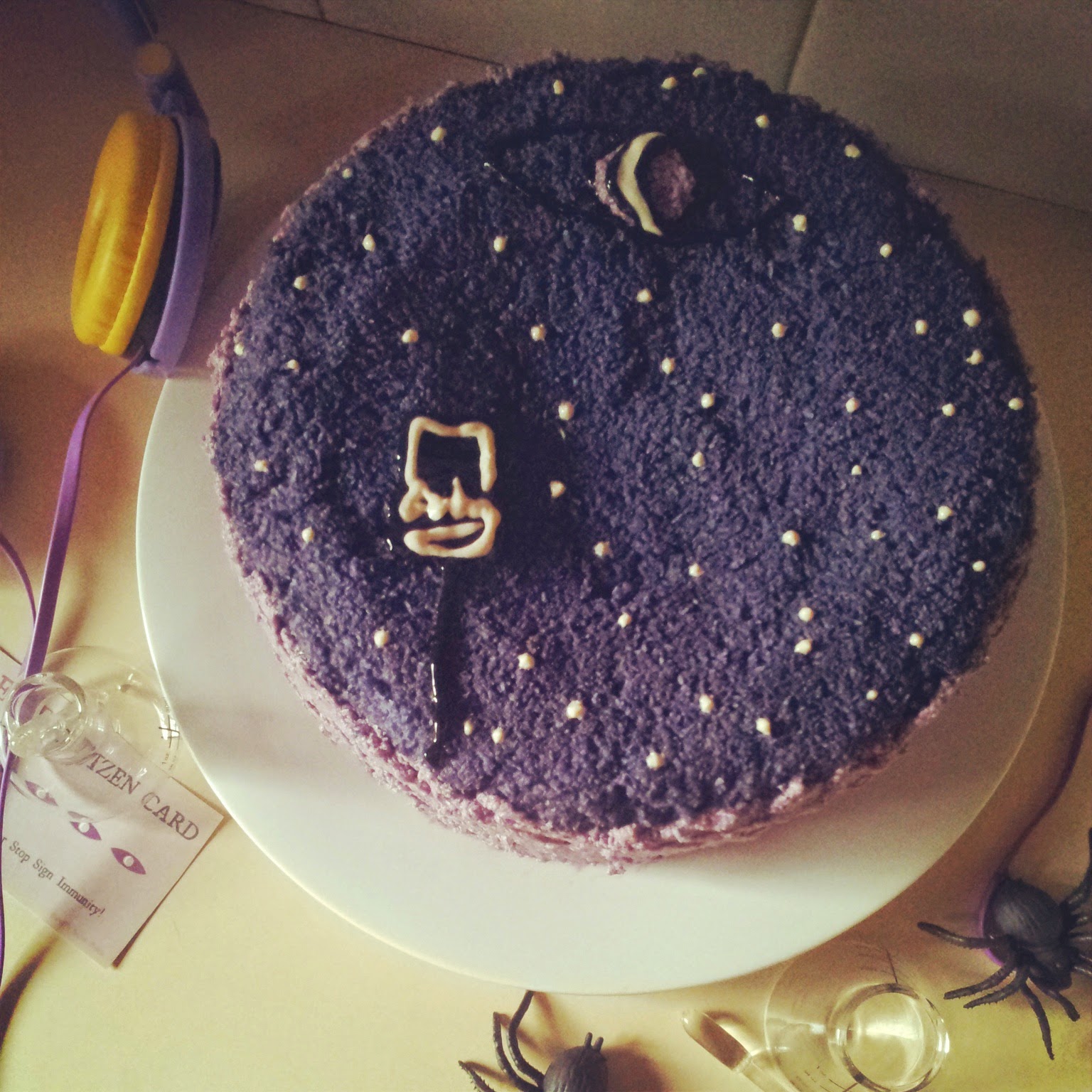 I have seen some amazing Night Vale cakes in my journeys around the internet, but I knew I was going to have to stick to something relatively simple if I wanted any chance of pulling it off. I settled on a view of the night sky above the Arby's with the Night Vale eye added in at the top. 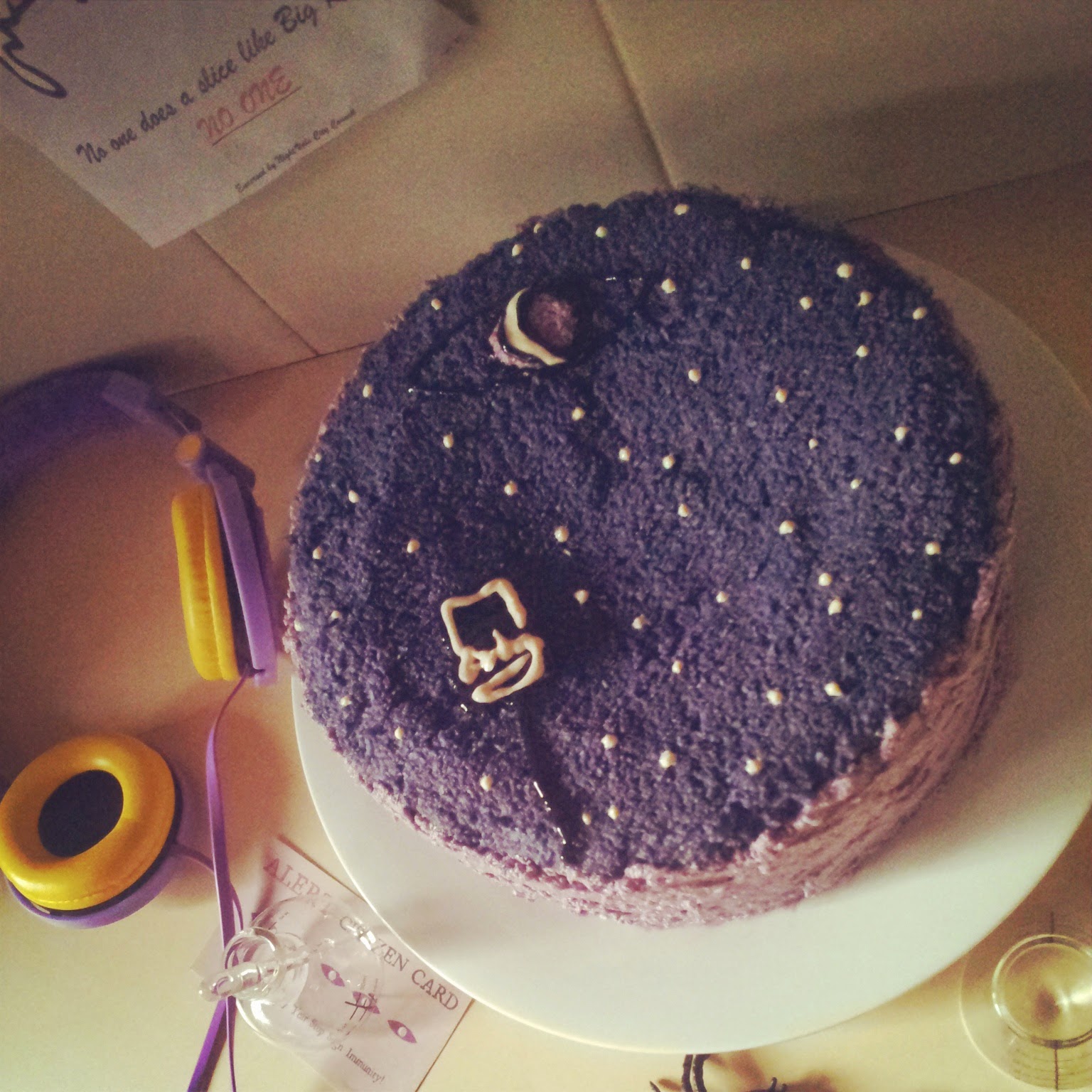 I used tubes of writing fudge for this, because I had them on hand and because I am totally unskilled with a piping bag. 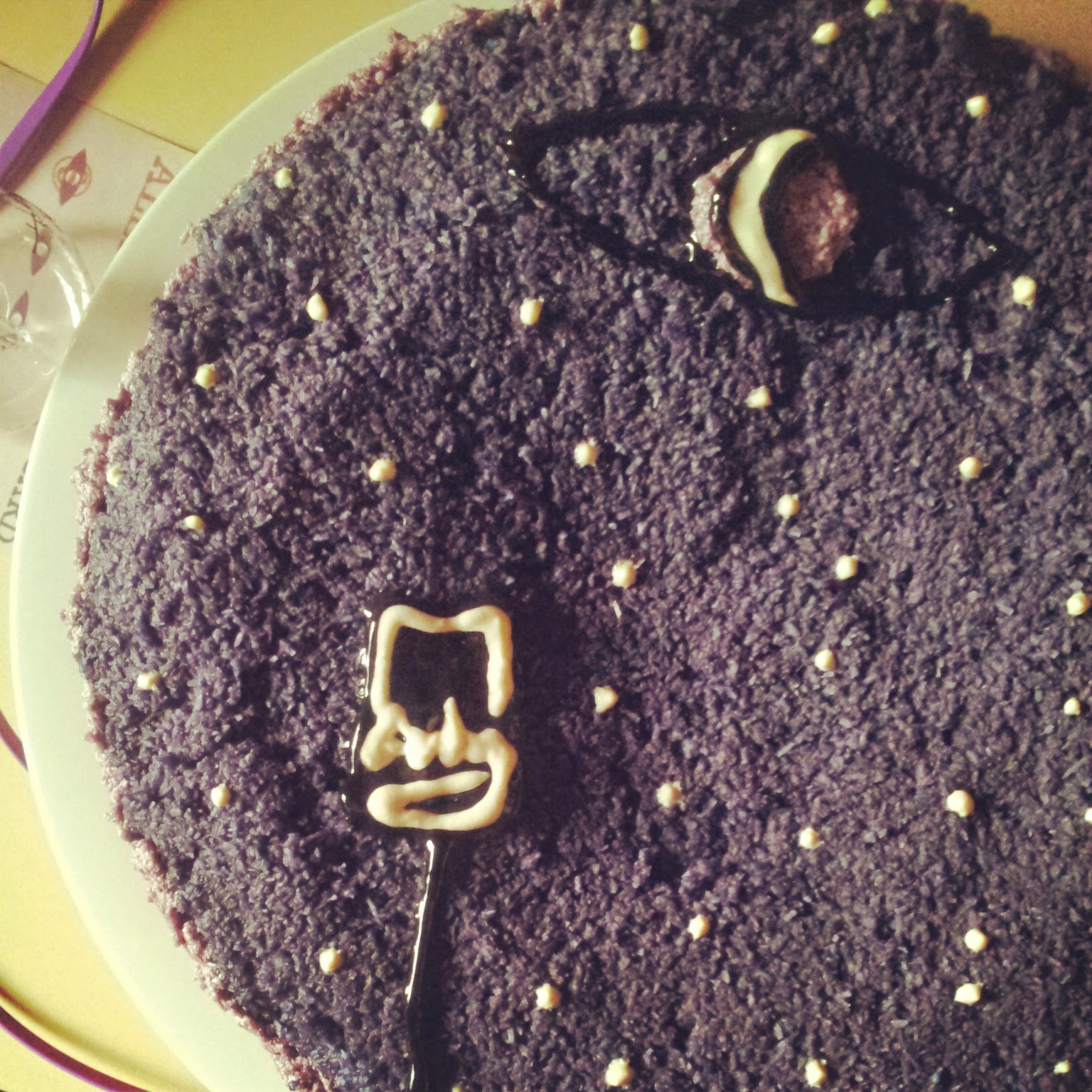 The tube was a little too thick to properly recreate the Arby's logo, but I think it's still vaguely recognisable which is really all I was expecting anyway ~___^ For the centre of the eye I used a little bit of the extra butter icing and layered the writing fudge on top of it. 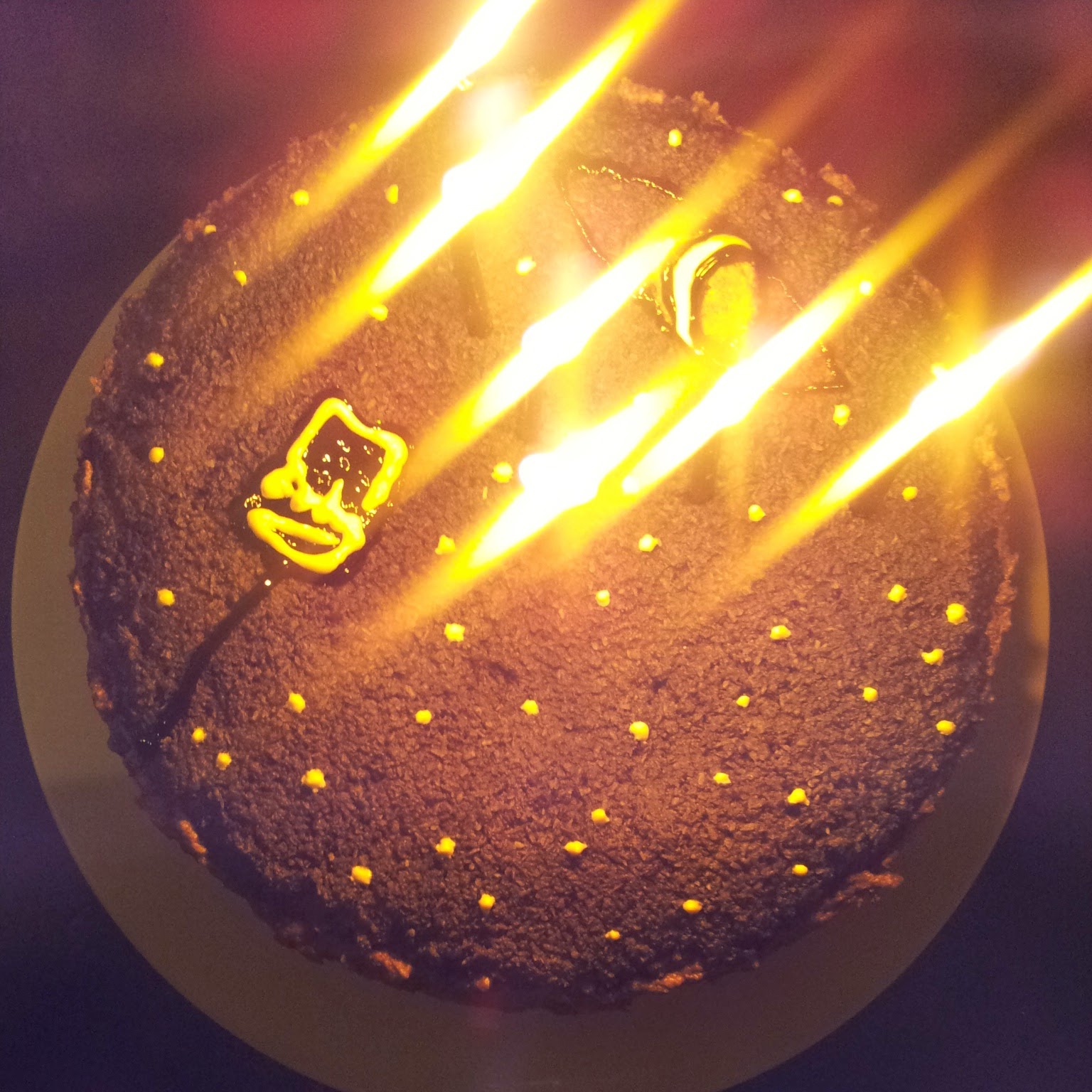 And when the candles were put in and lit up here's what we have; a view of the lights above the Arby's! ^___^ 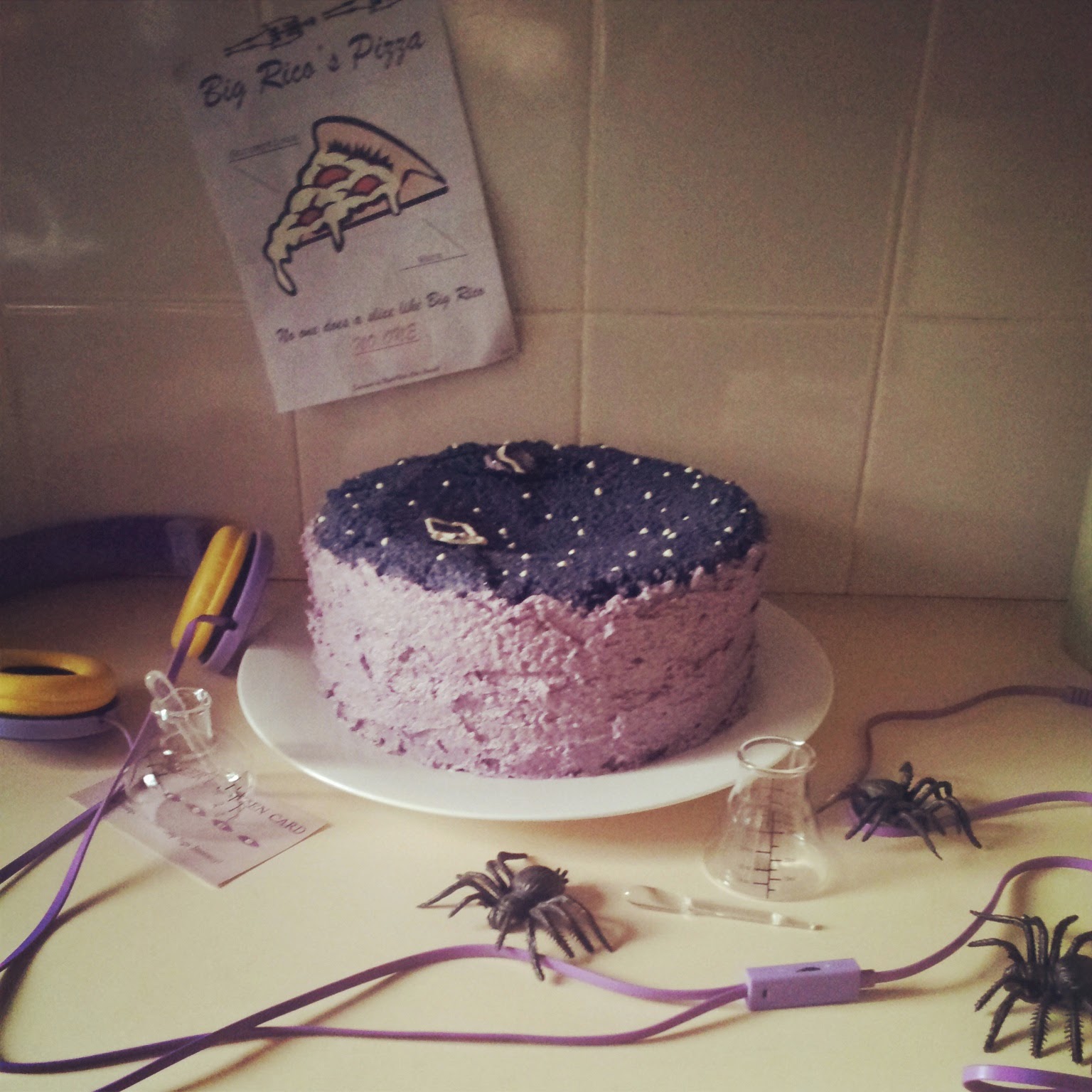 As you can probably tell, I had a little fun with creating a Night Vale style photo shoot for this cake; I started off thinking I didn't have much I could use as props but after a scout around our house I ended up with my LSP headphones, some plastic spiders from our Halloween decorations, and a tiny chemistry shot glass set (I have never done a shot in my life, but I also can't resist teeny glassware so ...). I also printed out the flyer for Big Rico's Pizza and an Alert Citizen Card which are now on my fridge; I think they really made the scene! I am ridiculously pleased with how this cake turned out. I made Scott and Rebecca admire it multiple times before we were allowed to eat it ~___^ 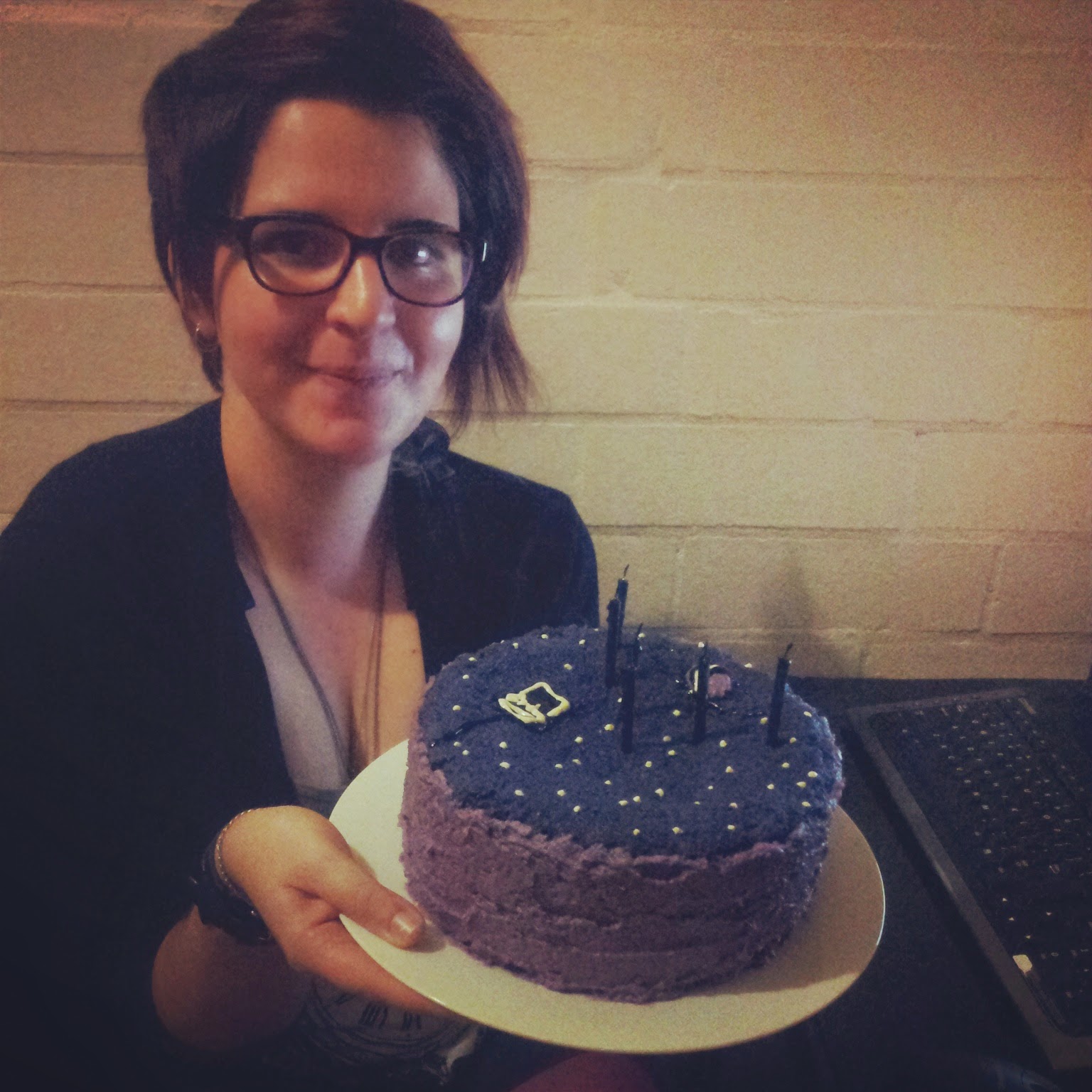 And I can report that it was delicious; the cake was moist and held together well, and the coconut icing is a great combination with the Anzac biscuit flavour. It really was a bit enormous though, especially since there were just three of us celebrating that night. As a result, I have eaten way too much cake in the last week. My taste buds love me, the rest of my body ... ehhh, probably not so much. Still, that's what exercise is for, right? ~___^ 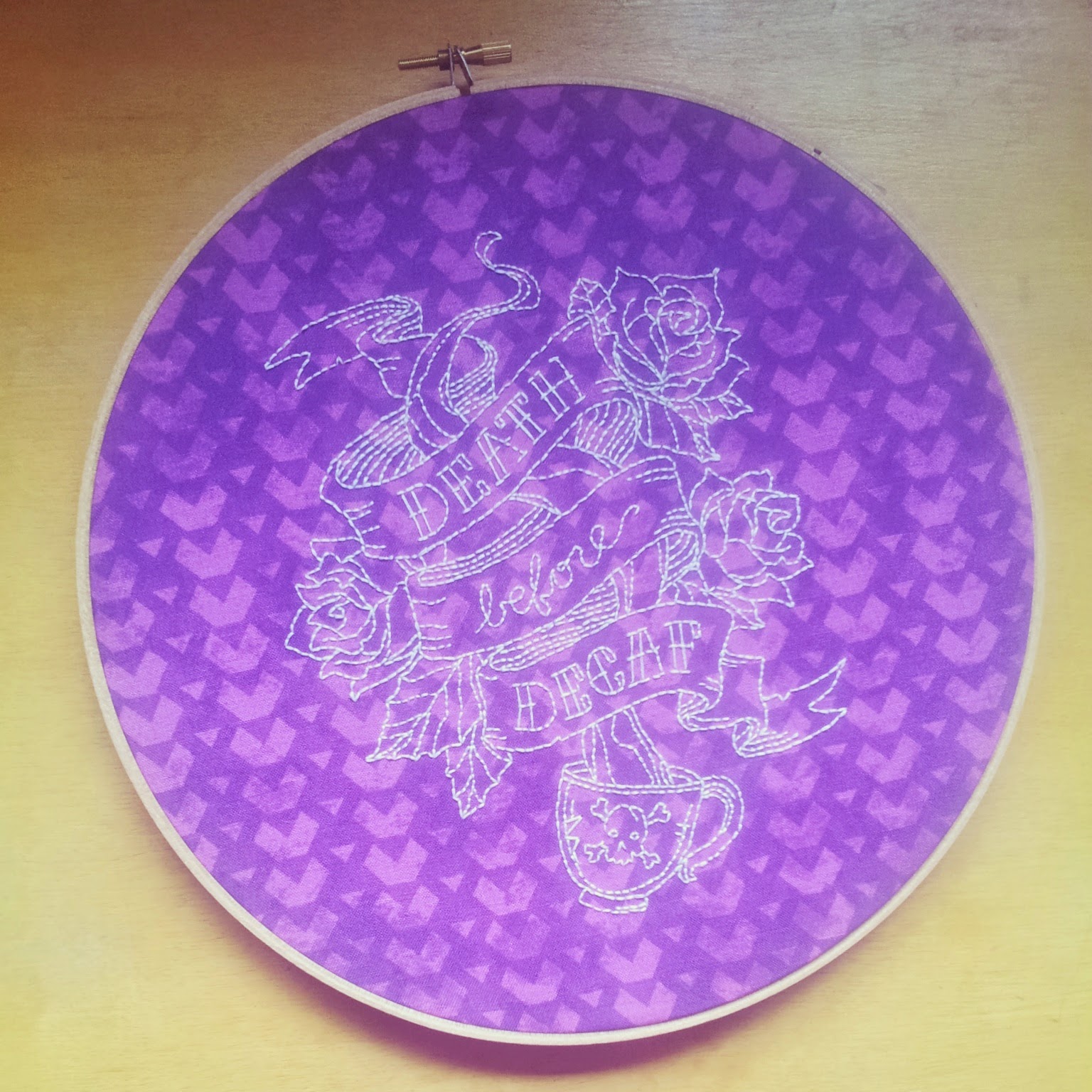 I also made Rebecca this Death Before Decaf hoop using a pattern from Urban Threads. I think I've mentioned before how much I like their patterns; they have some great designs and I always end up buying more than I need when I visit their site. This hoop is kind of a matching pair with the Eat Your Greens hoop that I made for Bec earlier, but I think the white stitching is a lot easier to read against the purple fabric than it is against the green. 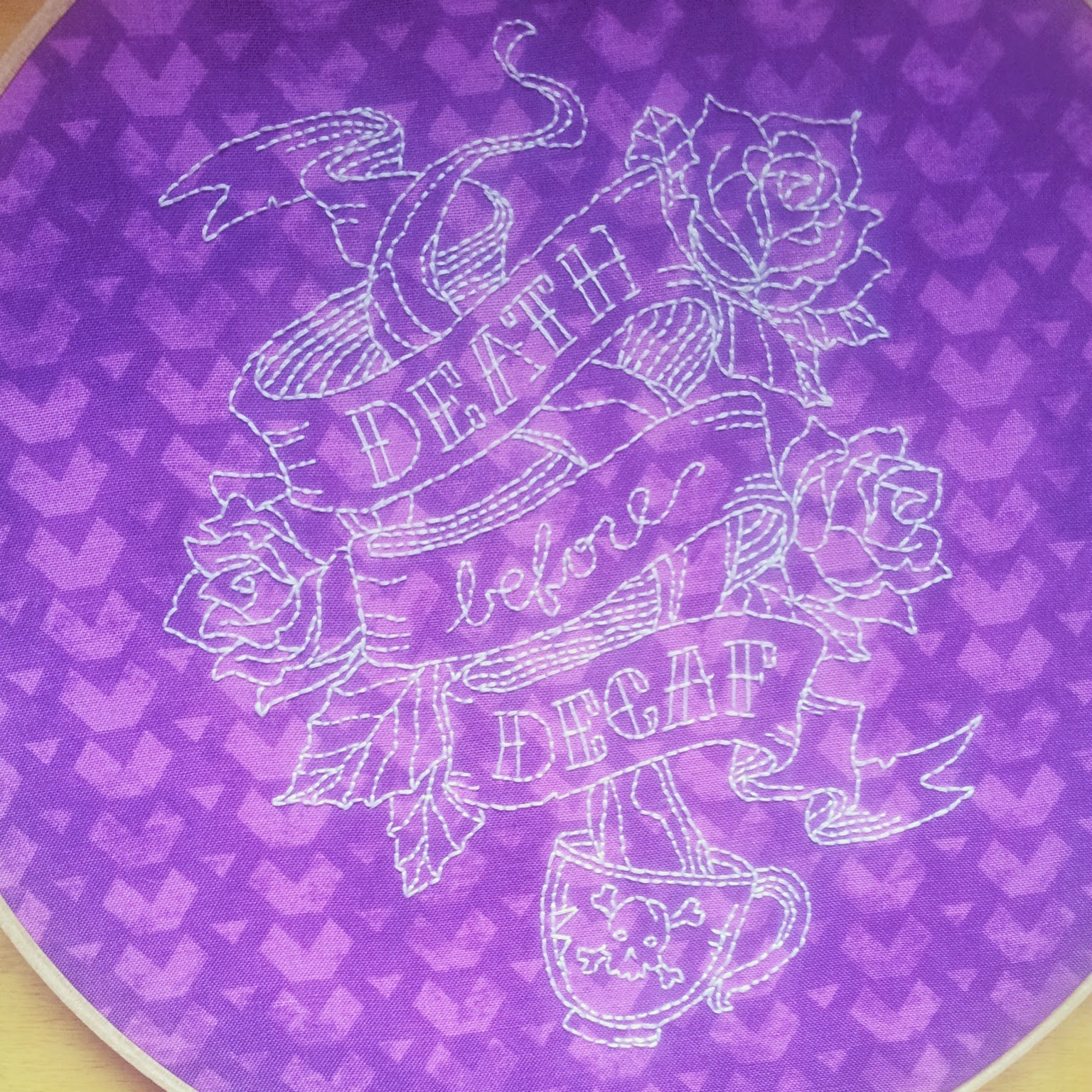 As per usual I printed out the pattern onto thin paper and then stitched the main part of the design through the paper. I had to spend a while ripping off the paper at the end, but it really does do a good job of ensuring that the design is replicated accurately. I would still like to try out different embroidery transfer methods, but that will have to wait until next year when I (hopefully!) have a job which allows me extra disposable income to spend on craft supplies ~___^ 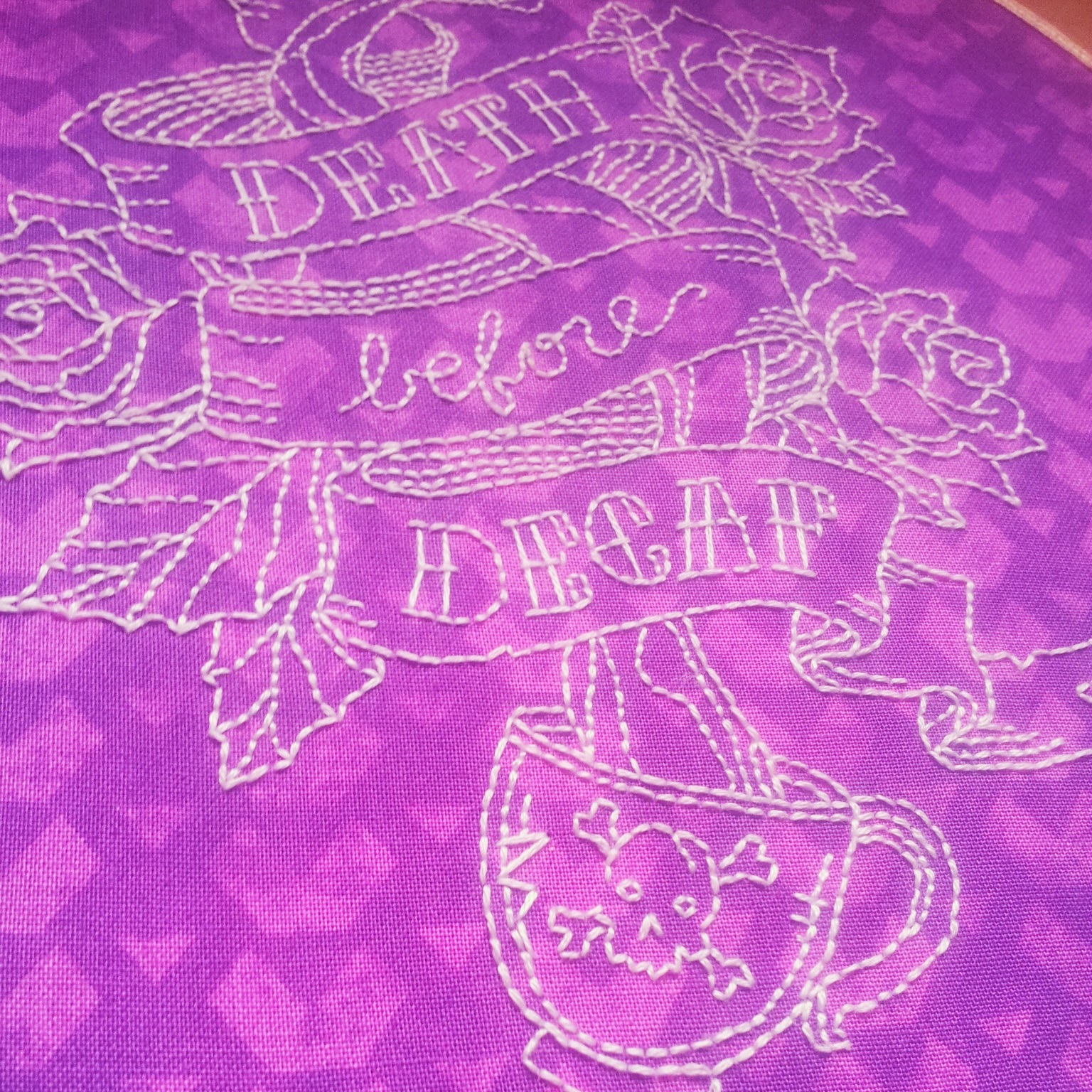 After I had stitched the main shapes down and removed the paper, I went back and did all the little sketchy details and the thicker sides of the "death" and "decaf" letters. 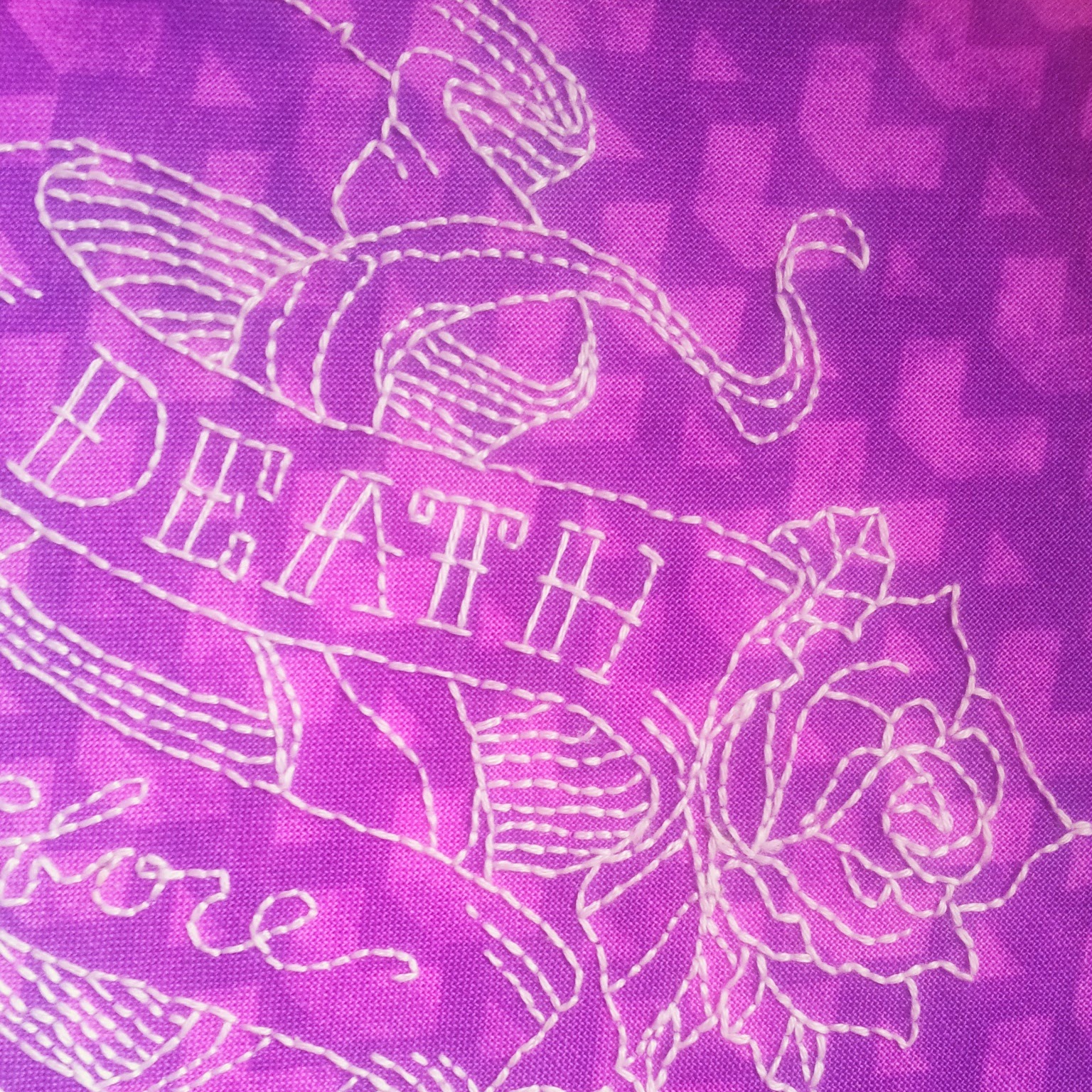 The roses are one of my favourite parts of this hoop; I just think they look fab. I also really like the curving ribbon which holds the text. When I first did it it looked a bit meh, but after adding in all those little lines on the back of the ribbon and the little curving details it really transformed into something special. 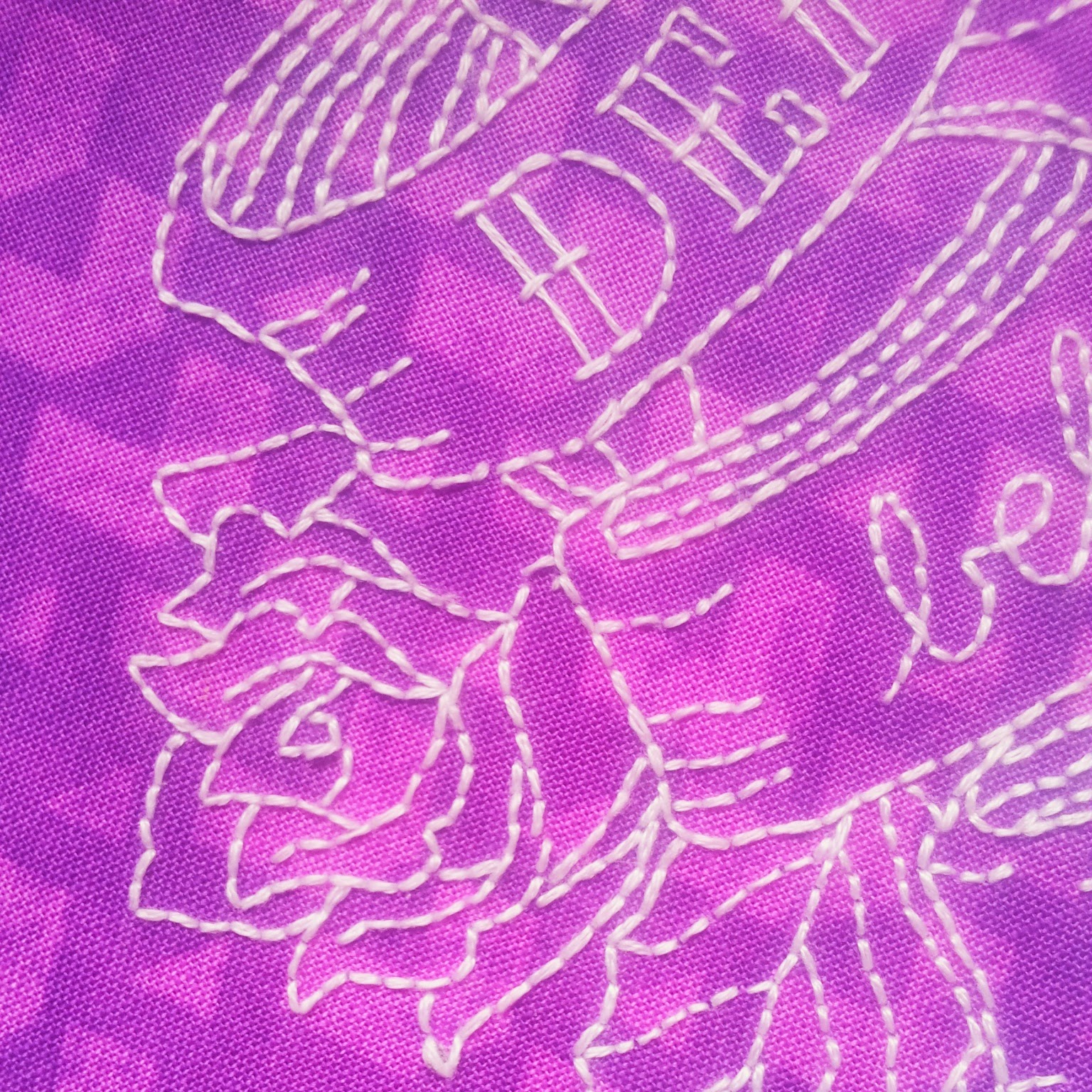 I also really love the cute little skull tea cup. This hoop would be a great present to give with a tea set and some tea bags or coffee beans. (Non-decaf includes tea, right?) 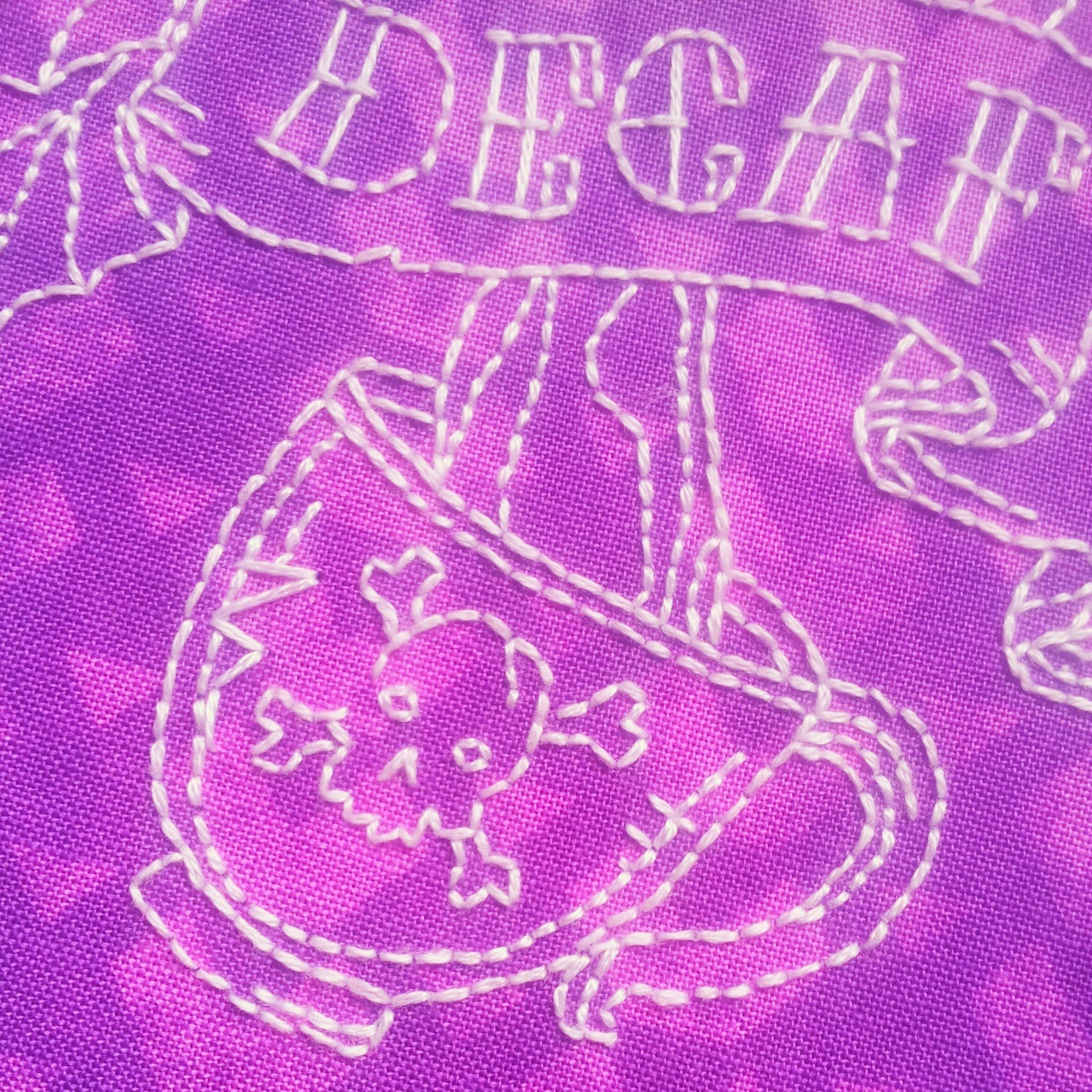 My husband, who seemingly can't live without iced coffee, was a big fan of this hoop too; I'm kinda tempted to make up another one for him/ our hoop wall. But I think that will have to wait until I regain feeling in my pointer finger ~___^ 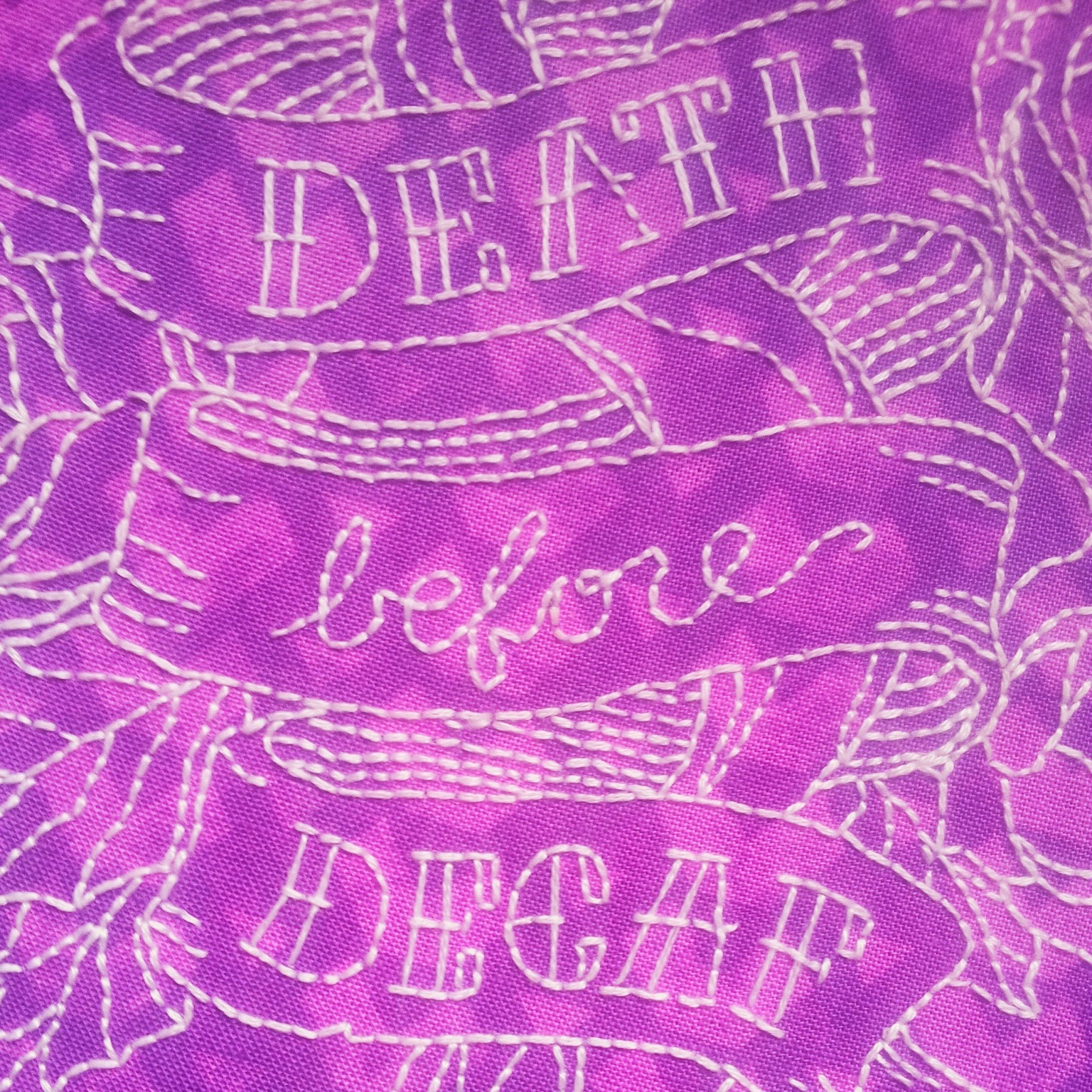 I've got one of my final assignments due this week, so I guess I better get back to doing that. However, I will be back next week with more Halloween projects (I realise that this post is not totally Halloween-y ... but it had a skull in it so that counts, right?? ~___^). I hope it stops raining so that I can do some outdoors crafts; but only time will tell!

P.S. Another big "Happy Birthday" to Bec; I hope you had a super fantabulous day ^___^

Both of those are incredible and all kinds of awesome!