Hello! Gosh, it feels like I've been gone a long time! There has been a virus going around here and between that and work, I haven't had much time for craft or blogging ; _ ; But, it's the weekend now and I have a crafternoon today so I am pretty excited about doing some crochet and sewing!

Anyway, here is some of the craft (and thifting!) that I haven't shared with you yet! ^_^ 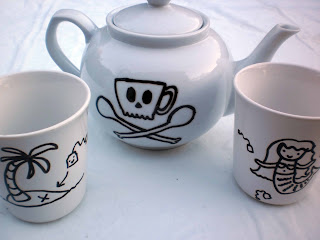 I used my porcelain pens to give this plain teapot and mug set a bit more interest ^_^ It's now pirate and tea themed! The teapot features a teacup skull and cross-spoon-bones ~_^ 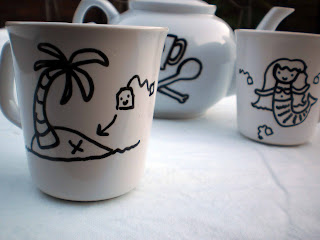 This mug shows a tropical island where a chest of precious tea might be found! 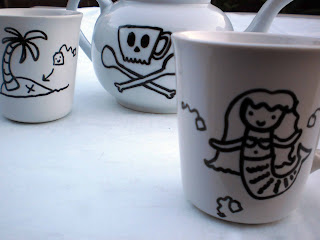 The other mug has a little mermaid ... who appears to be swimming through a group of teabags. Honestly, my brain is very strange sometimes! 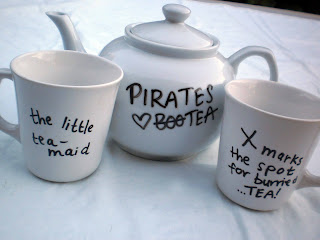 And this is the back of the set! ^_^ This was a super easy craft as all I did was paint and then bake. I'm pretty happy with how it turned out though ^_^ 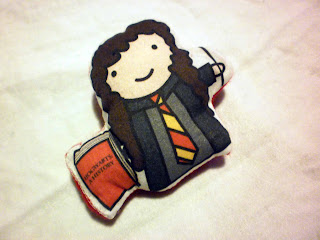 This second craft is even easier! I used some of the fabric I had designed on Spoonflower to make a little Hermione brooch ^_^ I simply cut out Hermione and a felt backing to match, sewed around them right-sides together, turned right way out and stuffed, then sewed up the rest and added a badge backing. She's pretty cute, huh? ^_^ I'm going to wear her to work on Monday! 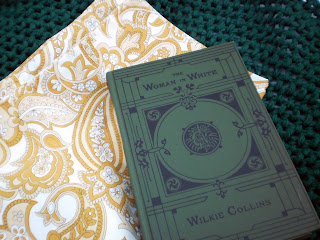 The book and pillowcase are results of my last thifting trip. Isn't that mustard paisley fabric awesome? I don't know what I'm going to make out of it, but I'm looking forward to finding the perfect project ^_^ The green blanket is not finished yet, but it's getting there! I am really excited about this project and I'll be sharing the pattern with when it's done ^_^

Next up, the rest of the Month of Craft Photos challenge!

The fundraiser that I was organising for work finally happened yesterday; it was International Star Wars Day and so, of course, the fundraiser was Star Wars themed. We had two teams, Jedi and Sith, competing in activities to raise points and donations. I haven't counted all the donations properly yet, but from our inital calculations, I think we raised about $500! Yes! We're going to donate it all to the Indigenous Literacy Foundation, which is a super great cause so I'm glad we're able to help out by dressing up, having afternoon teas, and challenging people to impromtu battles ~_^ The Jedi team won and the Sith team spent the entire day stealing things from people and then losing quite spectacularly. Seems apt!

Anyway, here's some other stuff I've been doing ... 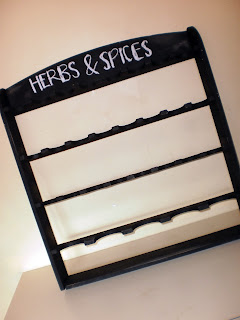 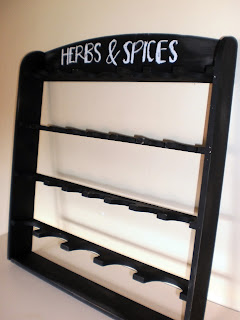 It was in pretty dodgy condition, but after some sanding, painting, distressing, fixing (the bottom shelf was separated from the main body), and hanging-ability-adding (gosh, I have a great command of the English language!) I think it turned out quite well. I used blackboard paint and just used chalk to write on the text. I may upgrade to paint one day ... but this way I can easily change it should I wish to in the future. It's hard to see in the photos, but the rack has had some light sanding done after painting, which gives it a subtle vintage look. 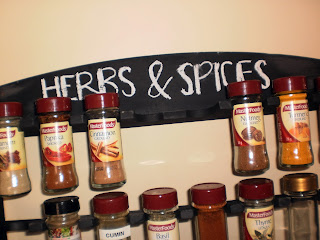 You can see here that the middle holdy bit (oh, again with the words and the speaking ...) is broken, which is probably why it was chucked out in the first place. I'm not sure what I'm going to do with it yet. I was thinking attaching some kind of container to hold cinnamon sticks or something, with the same kind of technique as this ... but I'm really not sure yet. If you've got any suggestions I'd love to hear them! Also, I think I'm going to have to spruce up the little jars that hold the spices and herbs now ... maybe little blackboard labels for them also? What do you think? ^_^ 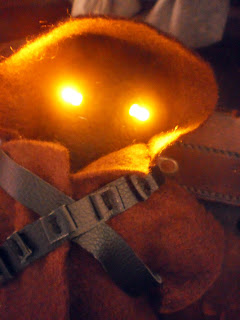 I took some better (read: not using my phone) photos of the Jawa plushie I made for Scott; aren't the glowing eyes cool? ^_^

I used this tutorial and I highly recommend it! This was my first time sewing with conductive thread and it was a lot of fun ^_^ I want to do some more electrical sewing soon! 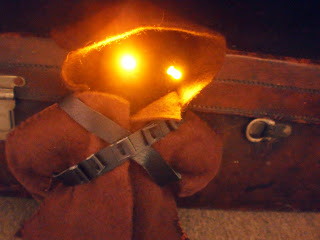 I couldn't find any brown jersey for the Jawa's cloak, so I used brown felt instead. I think it turned out well though! Also, this project is from my Pinterest board which means I have earned this badge that I just now made ... 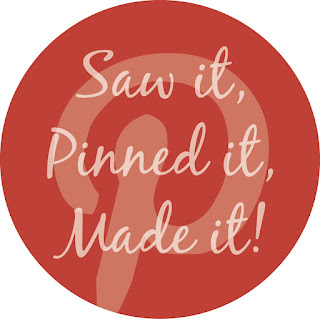 Yes! Giving awards to oneself is totally a normal and awesome thing to do ~_^ 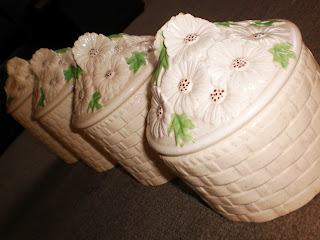 Now, this is not something I did, but something I recieved. Bec found these *amazing* jars at an op-shop and she brought them for me! Squee! ^_^ 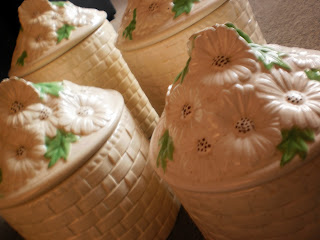 I love them so much! I have a jar in my craft room which is just like these, but the bottom is brown and the flowers are yellow. I wonder if there are more colourways in these awesome vintage jar sets? That would be so cool ^_^ This set is also destined for my craft room, but I'm not sure what I will store in them yet ... 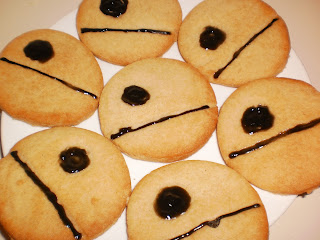 And lastly, I made Death Star biscuits for International Star Wars Day ^_^ I used the vanilla, cinnamon, and golden syrup biscuit recipe that I posted a couple of posts ago and some black writing icing. They turned out pretty well, I think. Next time, I think I will use a chocolate biscuit recipe though, to fit in more with the Death Star's colours. Or, can one purchase grey food colouring? That would be great for these!