Hello! The stores have started having Halloween decorations in stock, which I think is totally exciting, but some of them are a bit creepy. And not the good kind of creepy! ~__^ 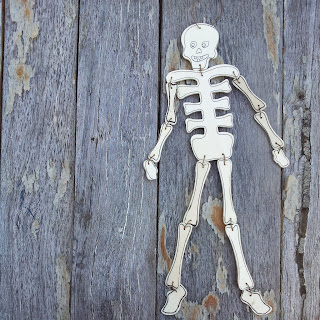 I found this wooden skeleton which one is apparently meant to give to children to paint. Would you give that to a child? I mean, look at it ... 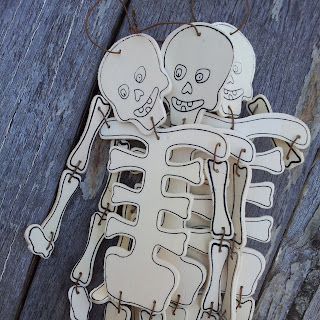 However, I like things made of wood, and I like skeletons, so I brought three. ^__^ If you have a skeleton, or any kind of wooden shape really, you can use this tutorial to make it a more stylish kind of creepy ~__^ 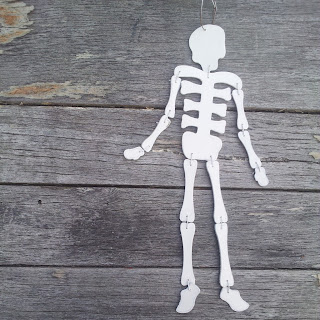 Firstly, give it a coating of white paint. This is just to cover up the outlines, so don't worry if it's not too neat. I used spray-paint, but you could use acrylic if you have that. 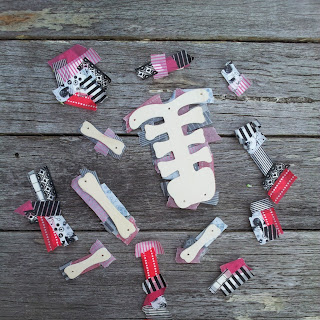 Then, grab an assortment of washi tape. The only limits to your colour combinations is how much washi tape you own! ~__^ Your aim here is to create a kind of collage look; rip off small pieces of washi tape and place them haphazardly. Overlap them, lay them in different directions, just make sure you cover all the wood. I also removed the original wire joining the skeleton together to make it easier to apply the washi tape.

Once all your pieces are washi-ed, use a scapel to carefully cut off the excess. This part is very similar to the Monogram Washi Tape Brooches I made a while ago ^__^ Then give everything a coat of mod-podge, replace the wire, and add some baker's twine so that you can hang it up! ^__^ 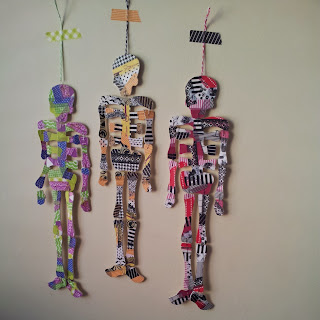 Huzzah! I made three different colour combinations; a modern green and purple, an original Halloween look of orange and black, and a classic red and black ^__^ 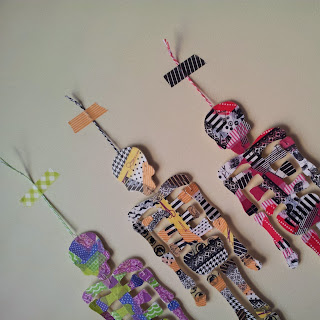 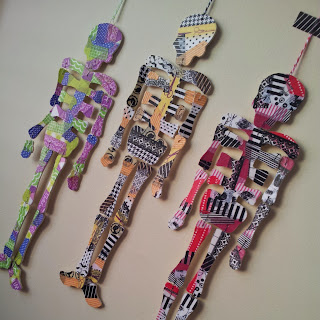 Obviously you don't need to have as much washi tapes as I do, even using three or four tapes would probably be just fine! 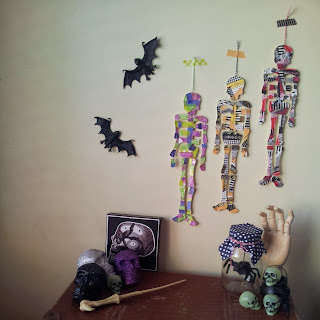 Nonetheless, they're a great addition to my Halloween decorating! ^__^ (Does anyone get the impression I like skulls? ~__^)

Ok, so, you know how sometimes you find something in an op-shop and it's just awe-inspiring in its magnificance? Well, that's how I felt when I found this dress. 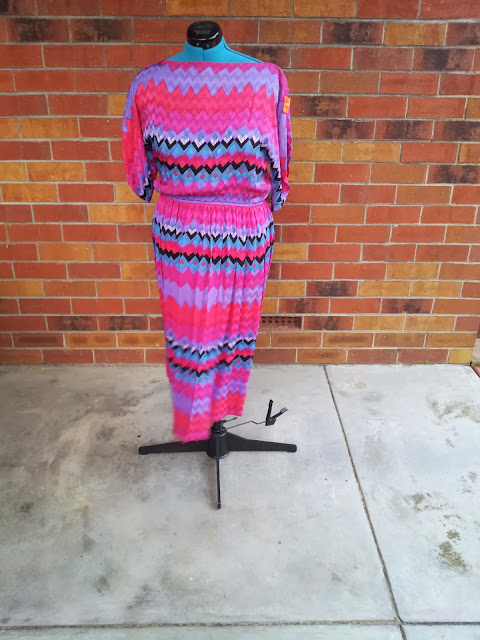 That pattern! Omg, swoon! However, the over-sized floppy sleeves, the dropped elasticated waist, and the weirdly high and straight neckline made for a dress that was, ummm, decidedly ugly. 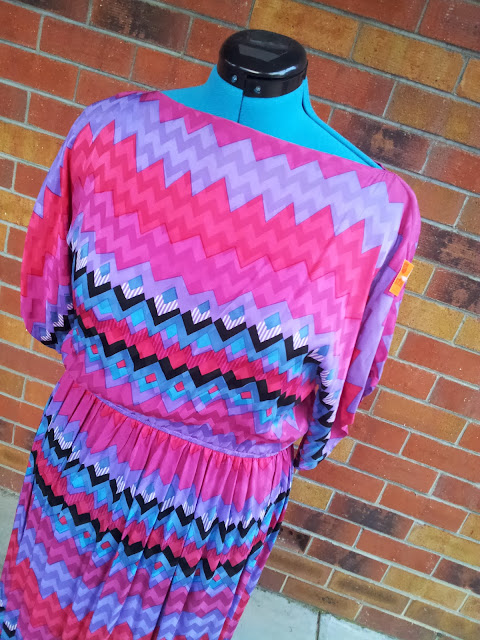 But, hey, it was only $8, so I brought this 100% silk vintage "beauty" home. And promptly shocked all the vintage-lovers in the world when I took a pair of shiny, sharp scissors to her. Honestly, I still feel a little guilty about that. But with a thick bit of elastic and my trusty sewing machine, I've now got an enthusiastically geometric skirt perfect for a night out! 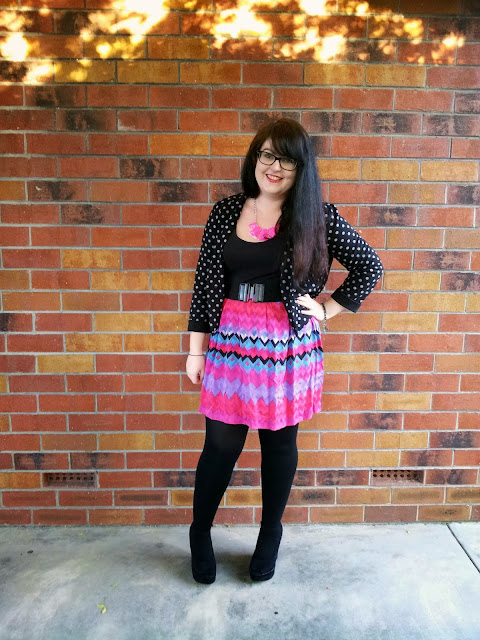 That helps assuage the guilt somewhat ~__^ All I did to make this was measure from the original hem to the length I wanted my new skirt to be which, in my case, was about 57cm. I overlocked the top to prevent fraying, cut my elastic to size, and sewed it into a circle. I pinned the skirt to the elastic and then just sewed the two pieces together, stretching the elastic as I went. I broke a needle doing that (*wince*) but other than that, it worked out just fine! ^__^ Since I used the original hem, I just left that alone. Yay for shortcuts! ^__^ 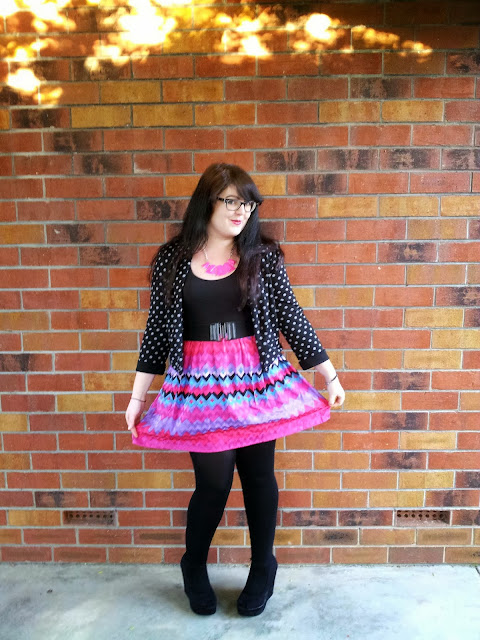 By the way, posts like this really remind me why I'm not a fashion blogger. I made poor Rebecca take about 30 photos of me in varyingly silly poses to make this post. And in basically every second photo I was either blinking, moving too much, making a stupid face, or doing ol' crazy eyes. Sometimes all at once! ~__^ Tres awkward. 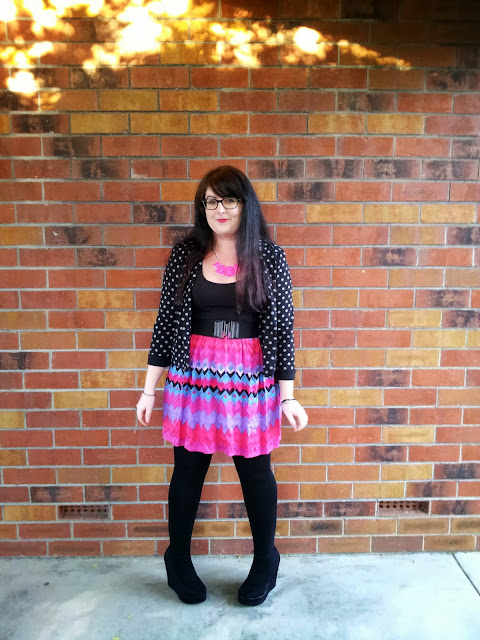 But anyway, what do you think? I hope you like it! ^__^ I'll be back next week with some more Halloween inspired crafts. Yay! I just love this time of year, don't you? ^__^

Hello! Today I was going to show you a skirt I made, but the sun was like, totally rude, and set before I had time to take photos. Inconsiderate, sun, very inconsiderate! ~__^ So I guess that'll be for next week, and now I'll show you the cute free poster I made for you! Huzzah! 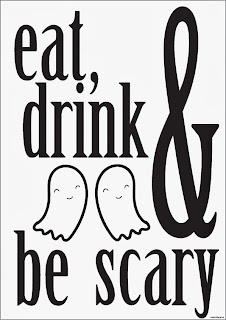 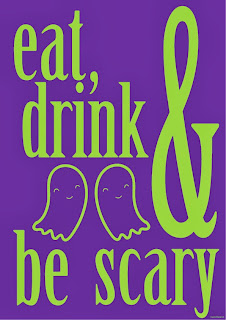 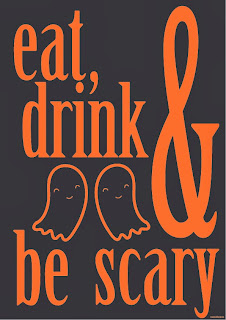 Halloween is one of my favourite holidays, and I'm excited to start decorating, so I made this poster in three spooky colourways ^__^

I'm thinking some cute coordinating washi tape will make these prints adorable and easy wall art for this month. Yay! If you'd like a copy for yourself, just click on the pictures above to download the .pdfs ^__^

Are you totally excited about Halloween as well? ^__^ 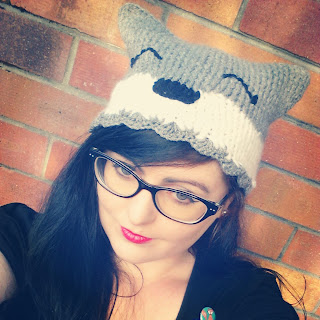 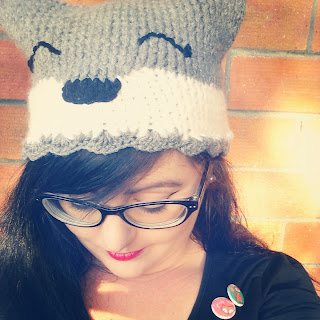 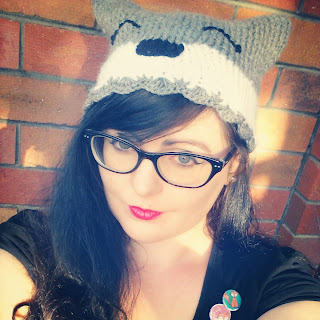 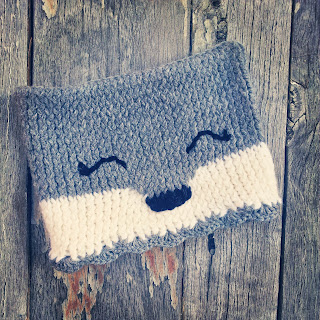 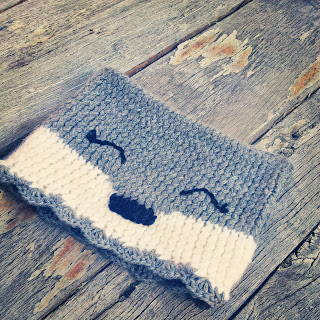 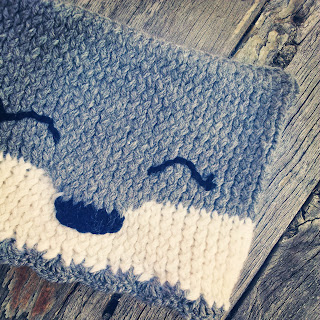 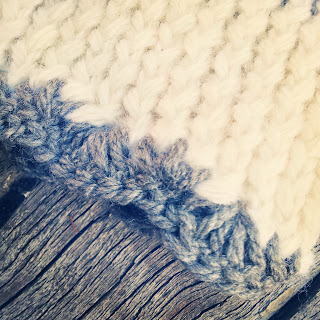 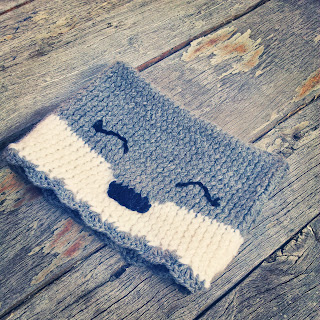 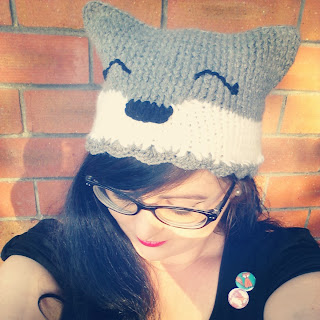