Hi folks! My weekend isn't quite here yet as I'm working both today and tomorrow but as the Harry Potter Craft-a-long finishes today I thought I would bend my posting schedule and share the photos of my final two projects ^_^ 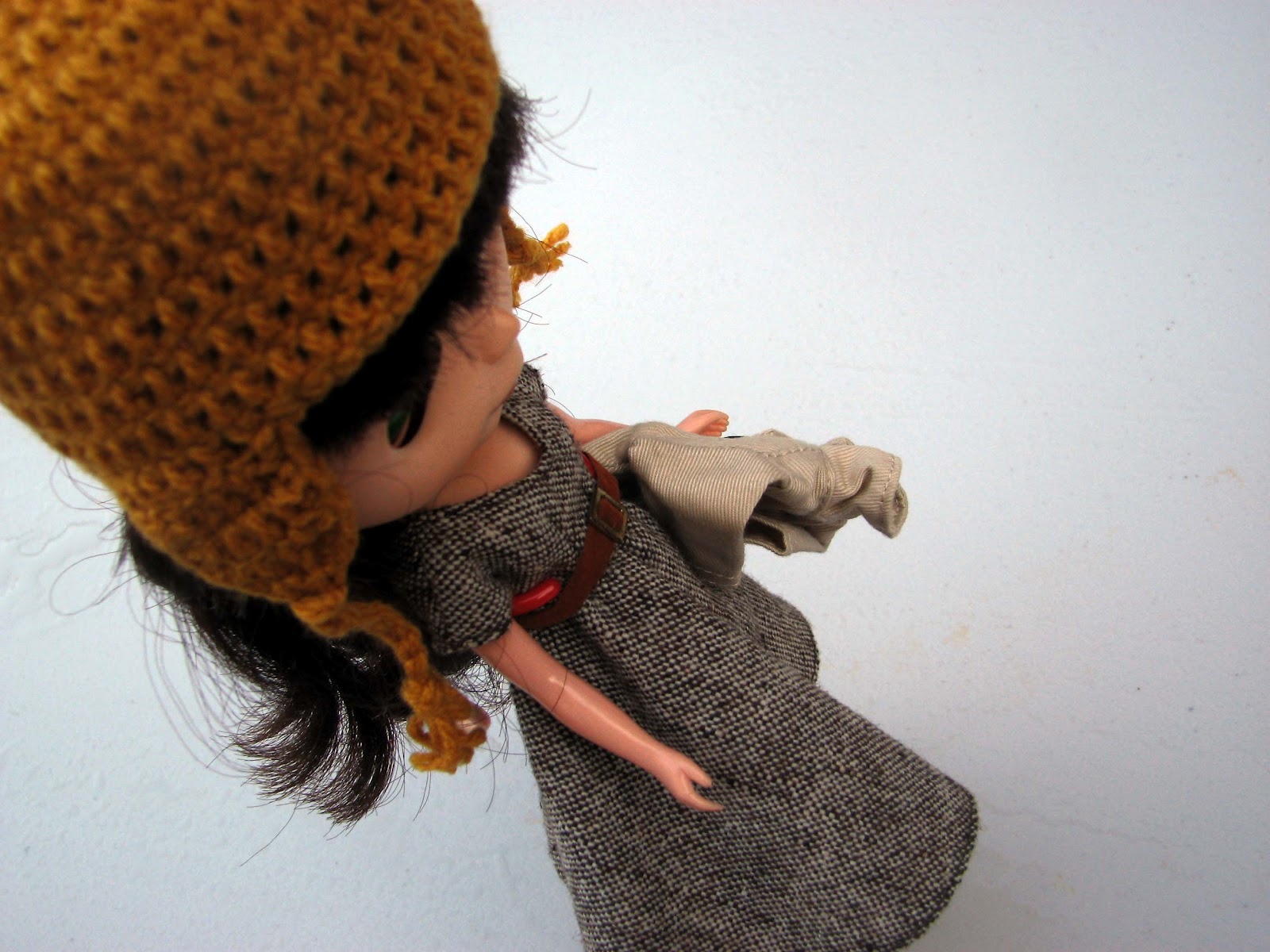 For the Reducio challenge I had to make something small, so I made this little hat for my Blythe doll Tarquin. 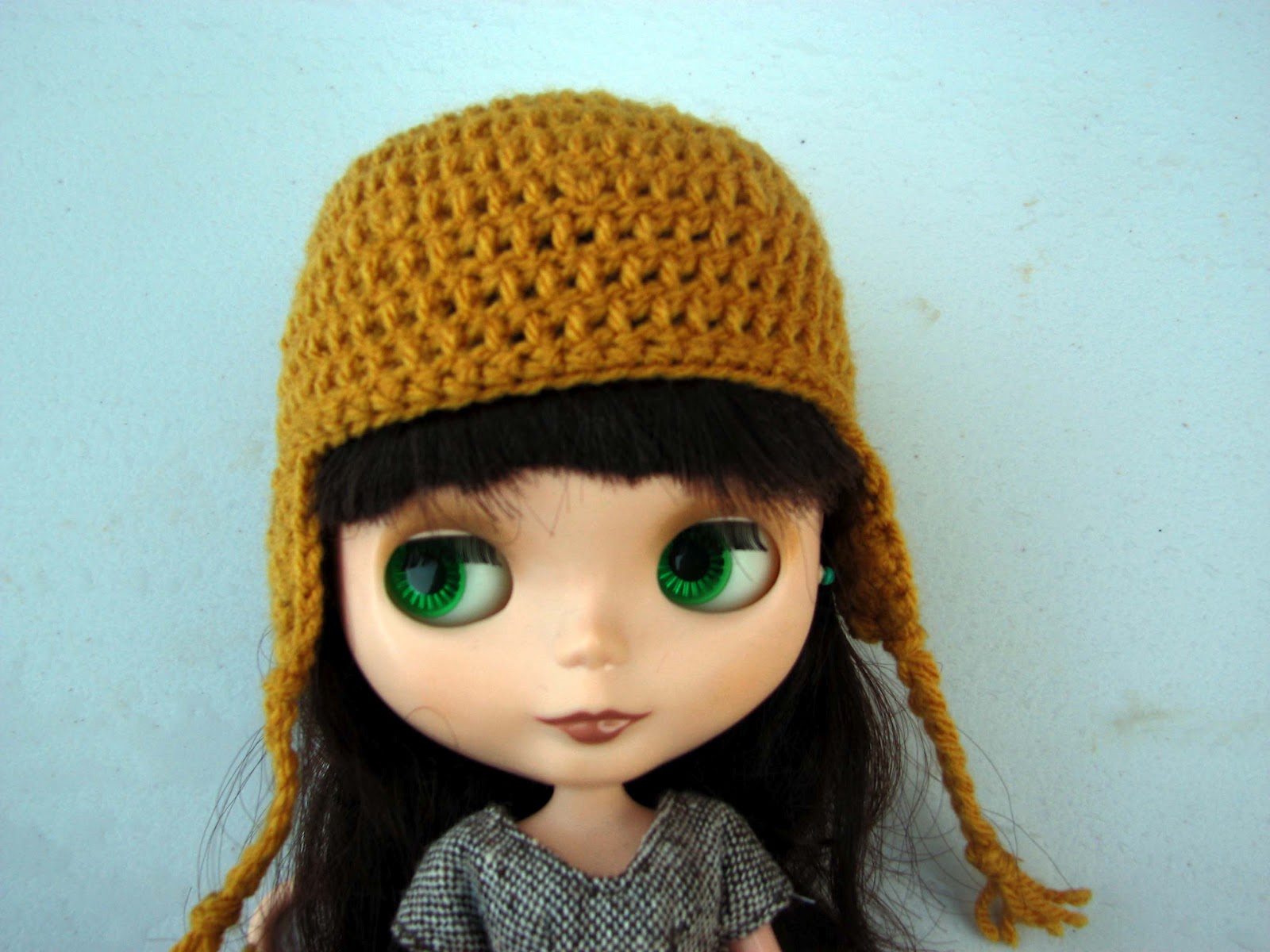 I made it without a pattern, and I think it turned out pretty well! 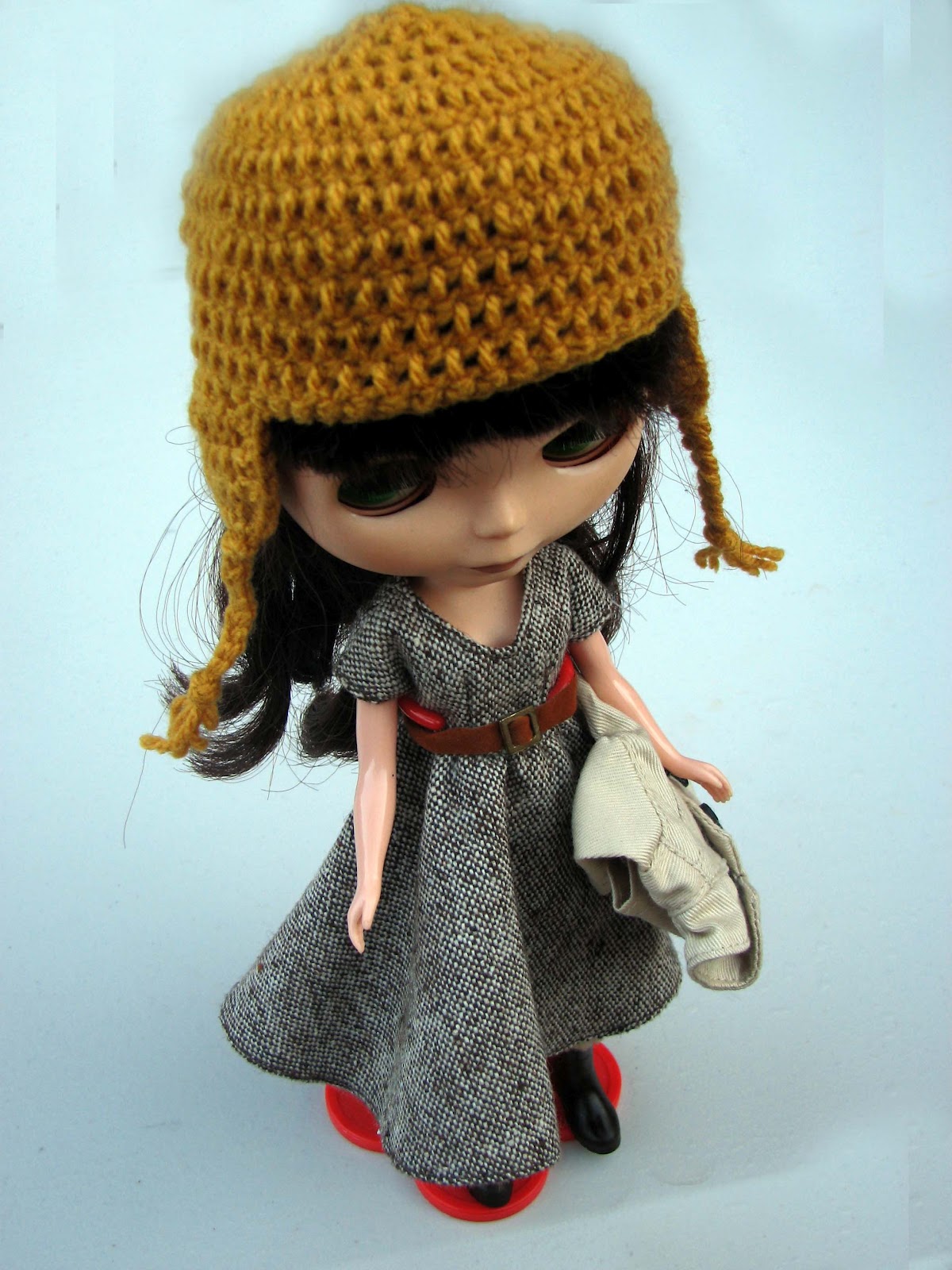 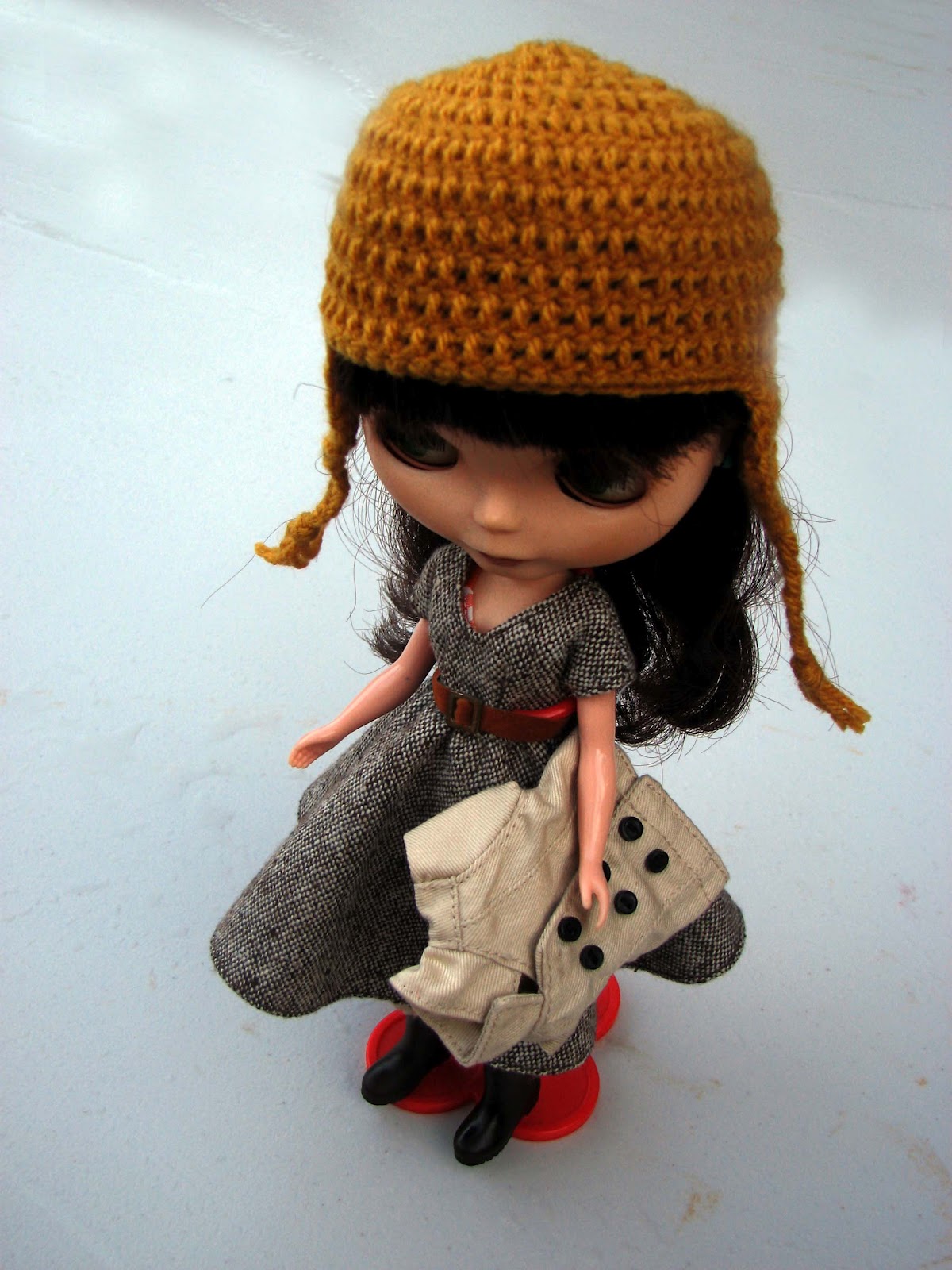 I used some vintage yarn from my Nana Tess so I'm not sure what it actually is, but I'd put my money on acrylic. I really love the colour though! 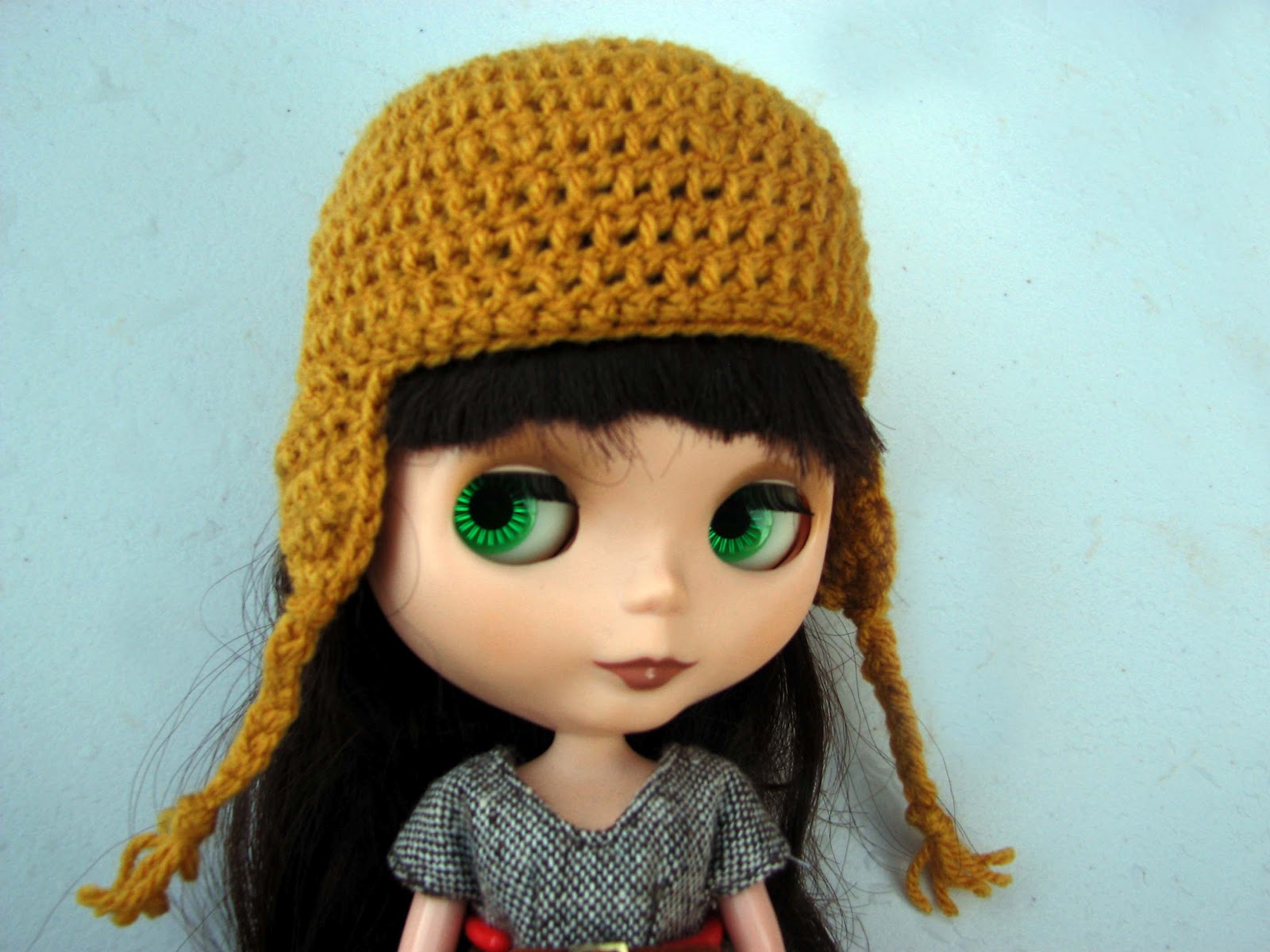 The other project is for Detention with Snape; the challenge being to finish off a WIP. I started altering this wooden drawer set ages ago but had only got as far as the first coat of wood stain. But now it's finished – yay! 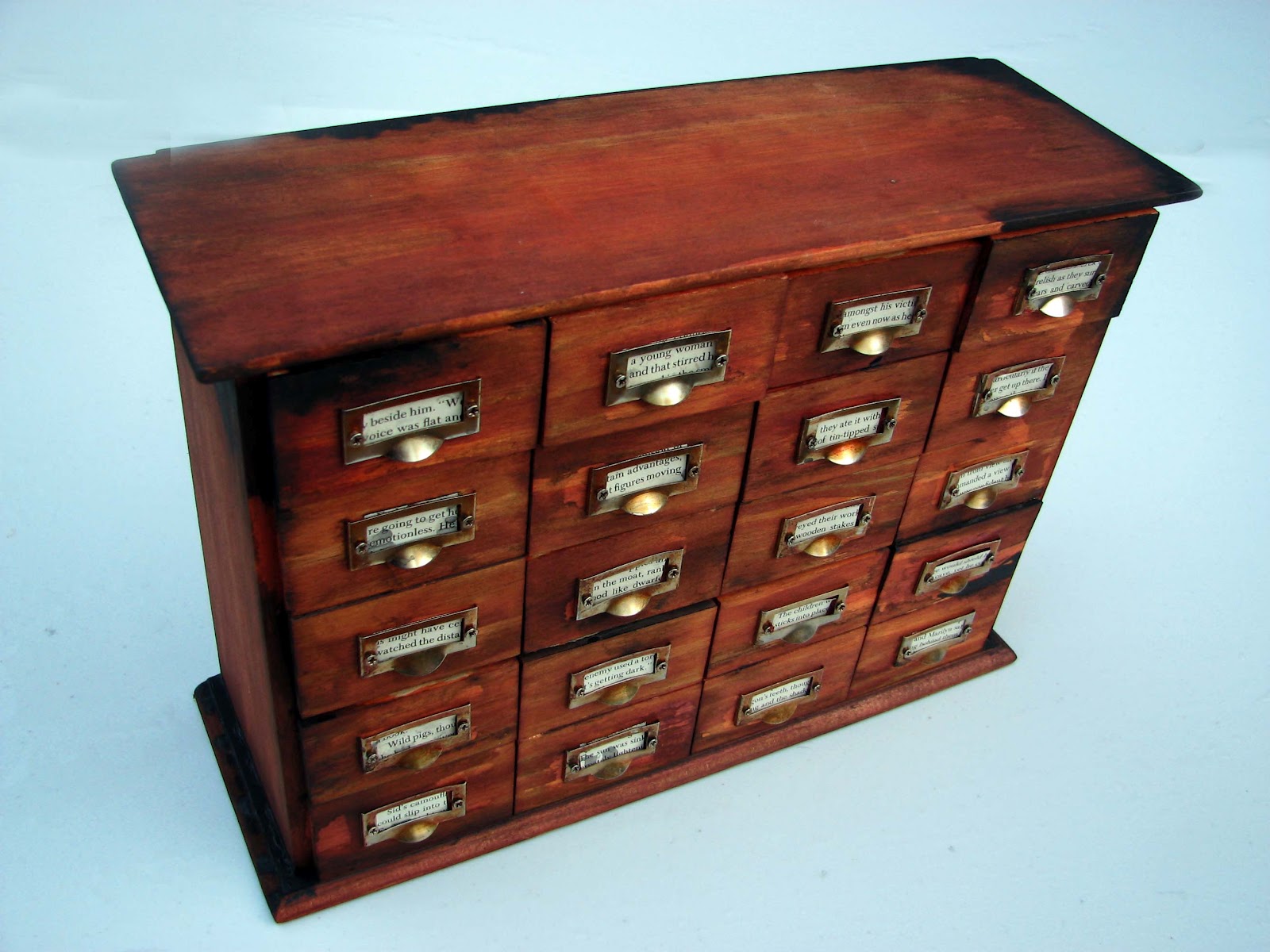 I used black acrylic paint to age the wood; I did some coats just as a light wash, others as undiluted paint, and several more in between of varying strengths. 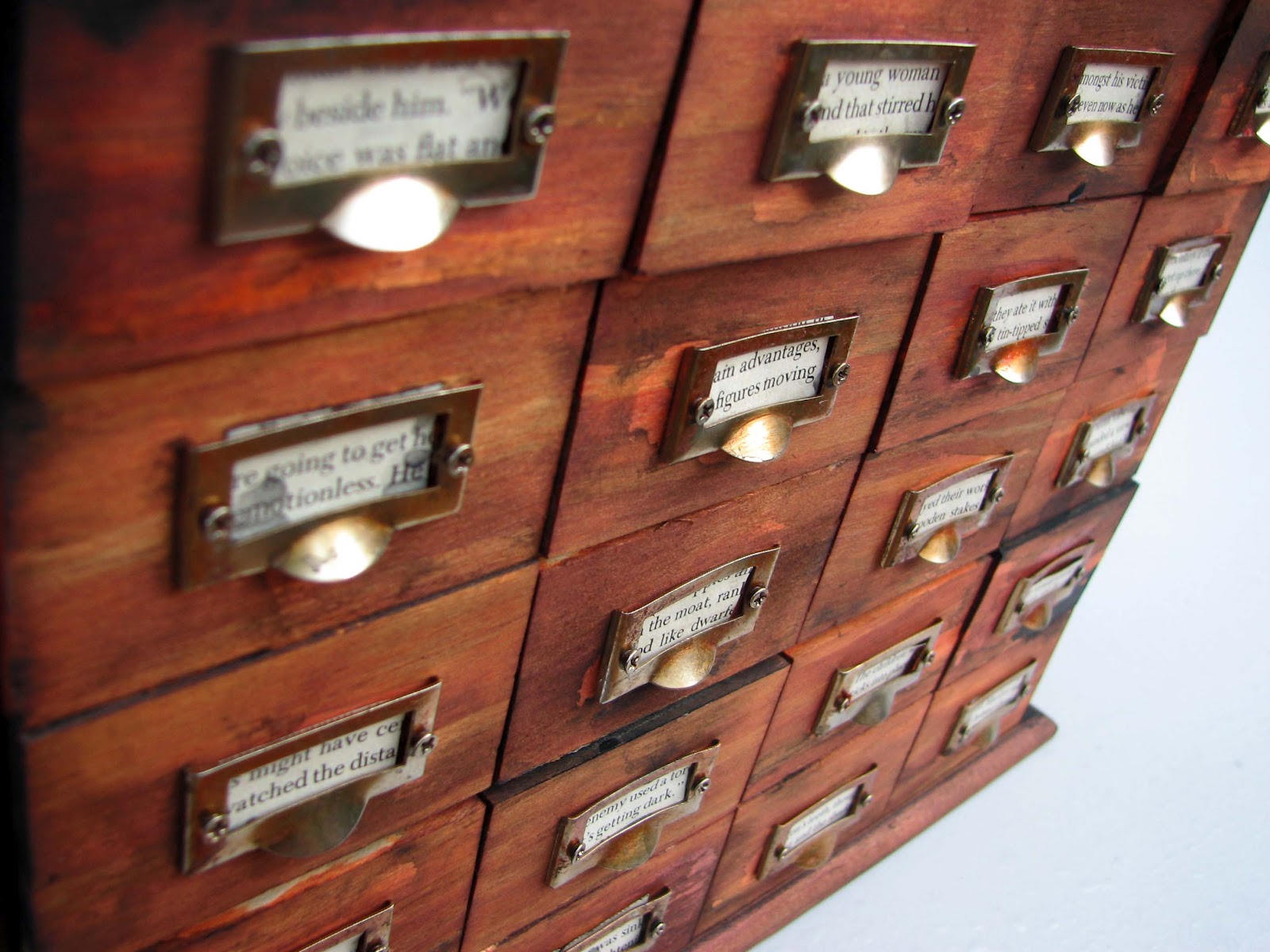 The labels are vintage book pages from one of the book safes I made; I just cut them to size and slipped them into the label holders. I think I'm going to use this for craft room storage – it's the perfect size for haberdashery. 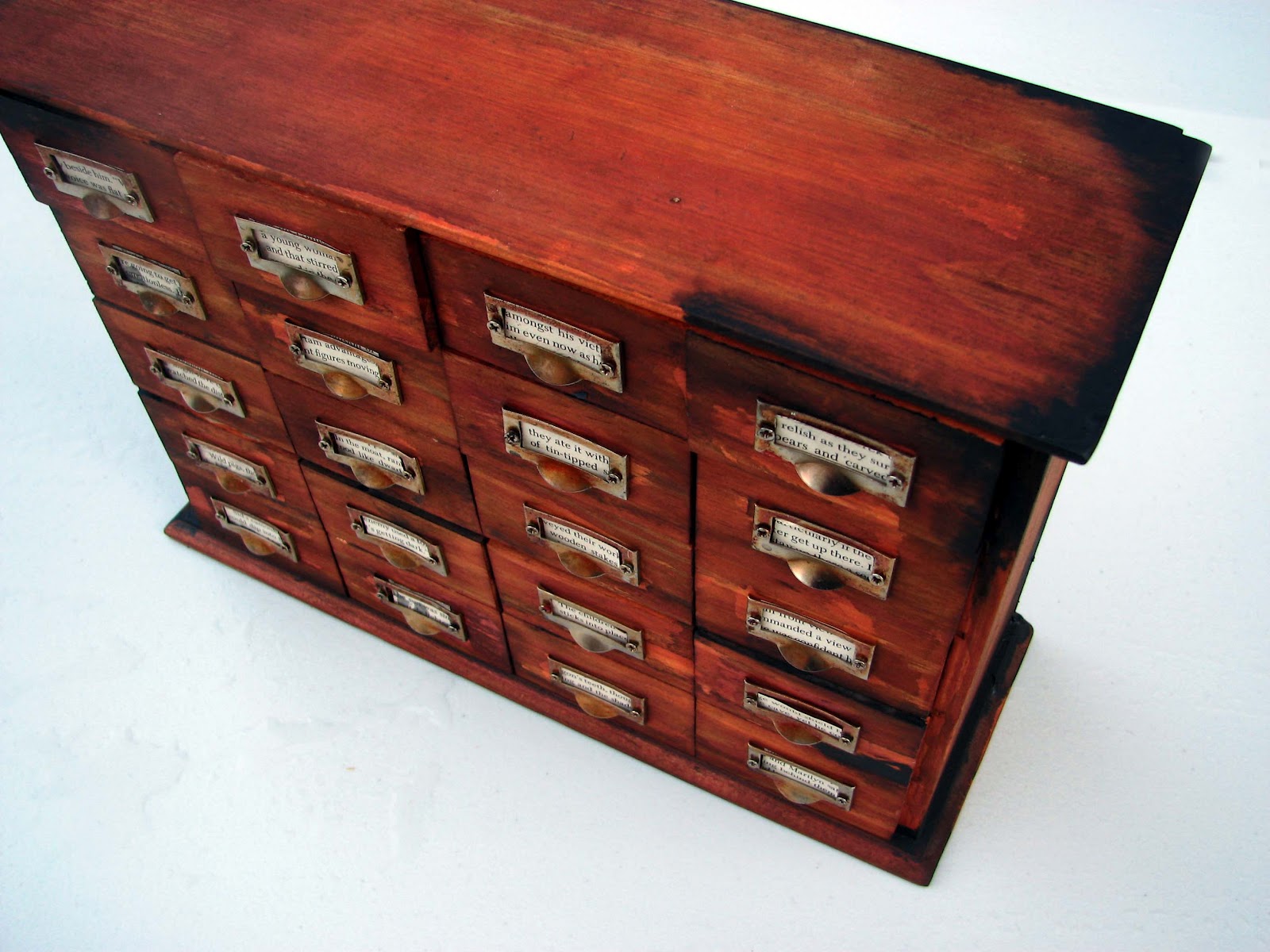 And that's it! The Craft-a-long is finished! I'm going to do the next semester (which starts in a couple of days) as well; I had a lot of fun and I'm really impressed with how many crafts I ended up creating ^_^

Do you think you'll join me for the autumn semester? (Even though it's spring over here?)

Hi all! Just a quick one from me today, I finished another project for the Craft-a-long and I just thought I would show you ^_^ 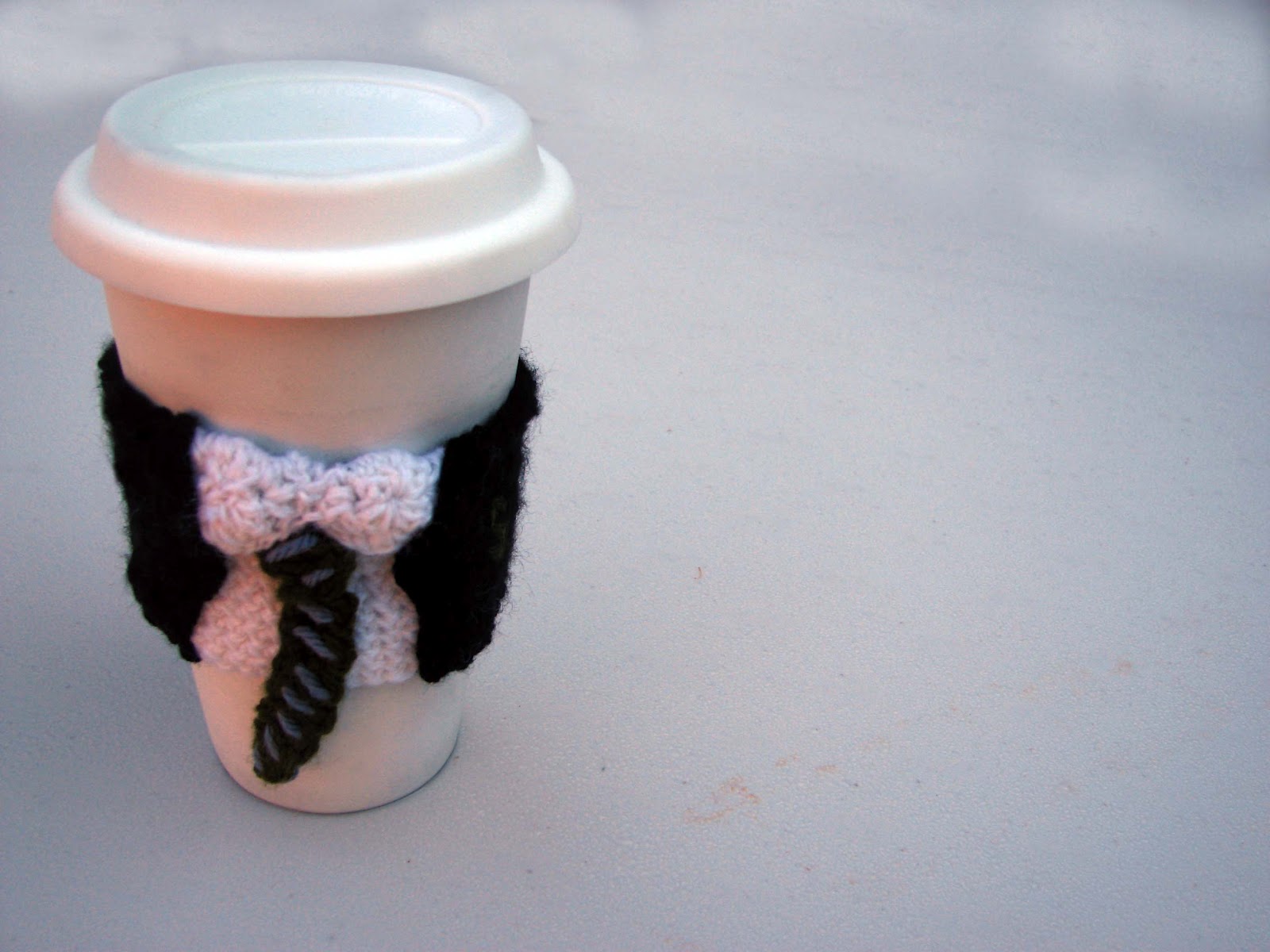 This is for the Sorting Hat Challenge, to indicate which House I'll be in for the next Craft-a-long. As you can see, I'm going to stick with Slytherin! 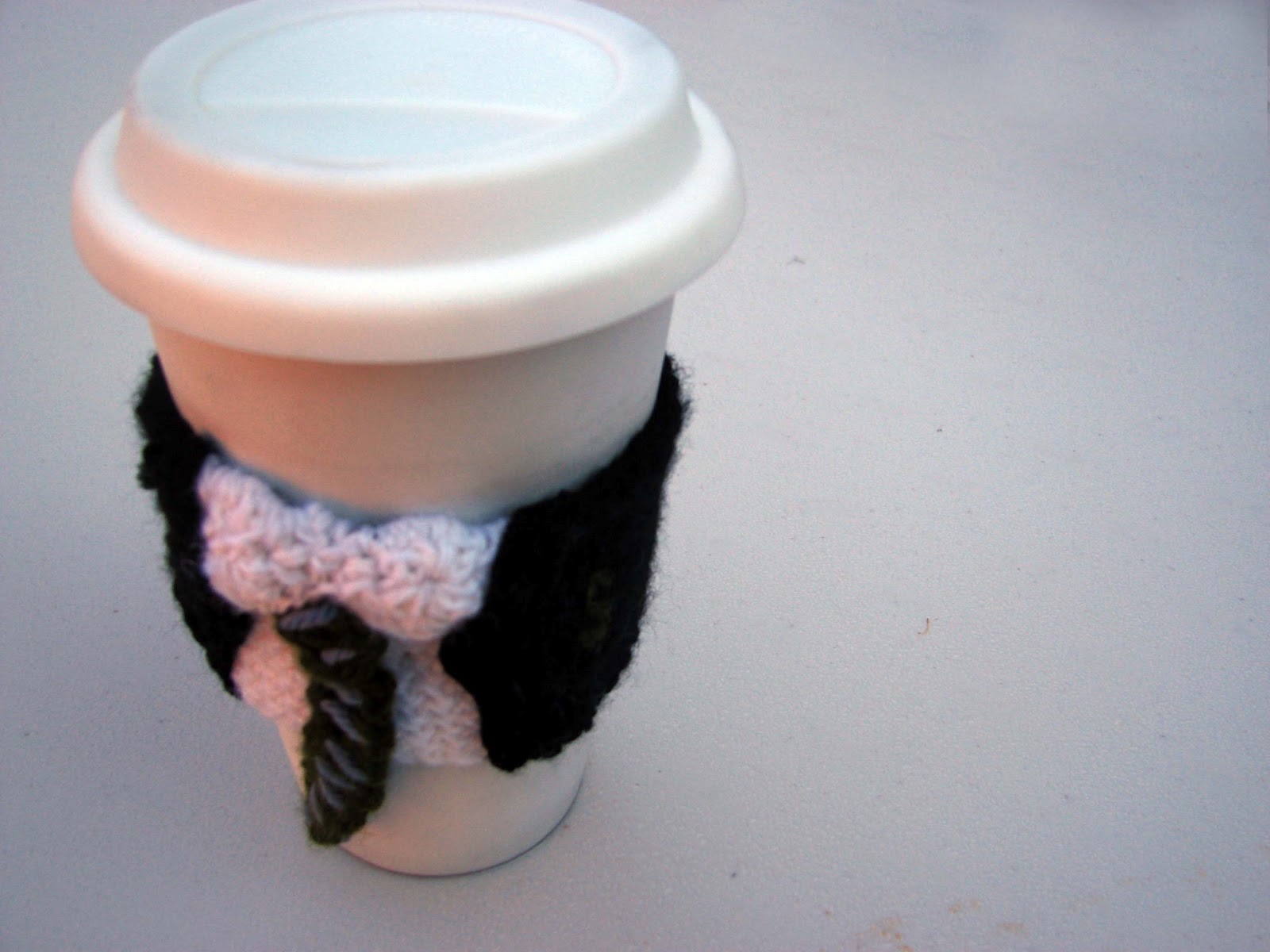 This is a cuff for my take-away coffee cup (although I only use it for tea) to keep my hands from burning. I crocheted in the round to make it, and then added the collar, tie, and "S" mark. In case you can't tell (and I wouldn't blame you), it's meant to be a Hogwarts uniform as worn by Slytherin House. I'm not totally happy with it though as I think it looks a bit odd; but I'm not sure how to fix it up. What do you think?

I've got two more challenges to complete for the Craft-a-long, and it finishes on Friday! Do you think I will make it? 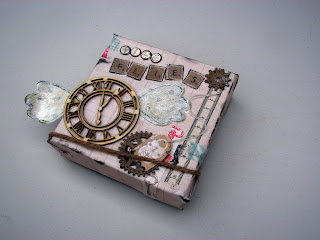 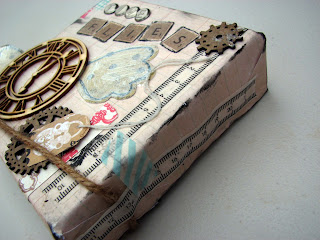 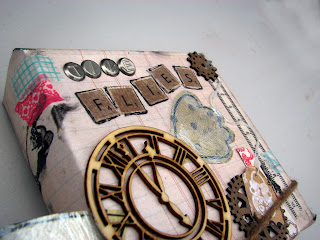 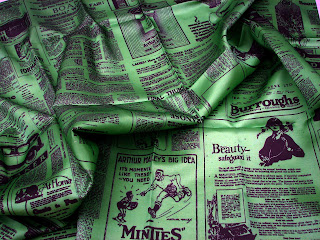 Hello! Today I made a handy little cheat sheet that you can use for making clothes for yourself and others ^_^

It's a pretty basic idea, but keeping measurements in one place is really useful, and having it on a sheet with a cute skeleton makes it even better ~_^ You can download the file from my Google Drive by clicking on the image below. 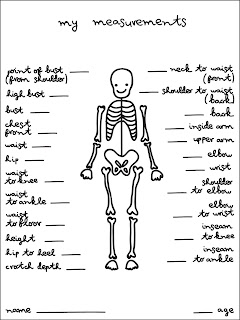 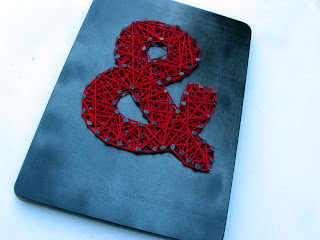 I finally tried doing string art! I really enjoyed it; it was a nice relaxing project perfect for doing in front of the TV. I used an old chopping board that I had been using for wood-burning practise - I just turned it over and spray painted it using metallic charcoal. Then I used upholstery tacks to create the outline of the ampersand. 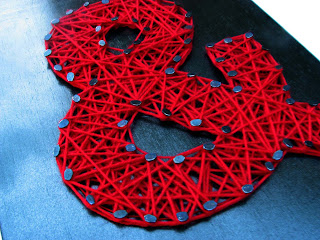 I originally tried filling it using embroidery thread, but I didn't have enough so I swapped over to using 8 ply red yarn. This project was 100% stash as well - yay for not buying new things! ^_^ 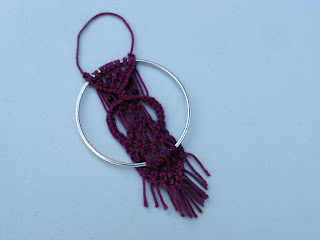 I also gave Macrame a go - it was a lot harder than I expected! I used 2 ply cotton thread in purple and an old silver bracelet to make this owl. 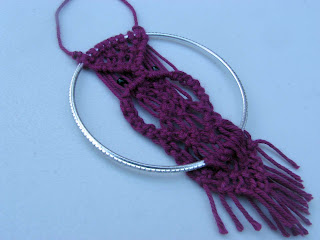 I'm not totally happy with how it turned out, but it's still pretty cute and I'm glad I tried out this technique ^_^ 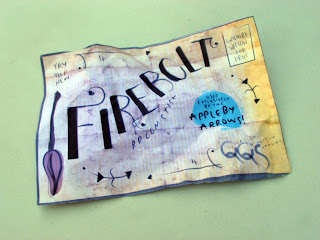 I used Adobe Illustrator to tidy up a sketch I did and make this poster for the Firebolt broomstick. It was a lot of fun doing this, I really enjoyed vectorising my hand lettering. 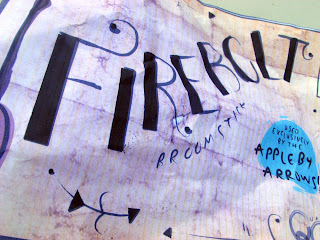 I printed it out and gave it a bit of a crumple to make it look a bit more "found" rather than "just printed". 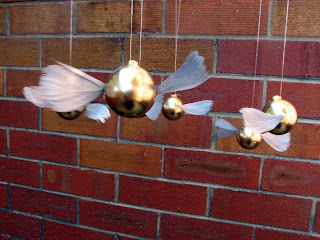 And, finally, here are the photos I promised of my snitch ornaments! 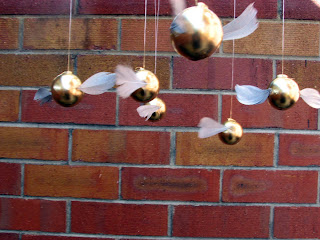 I spray painted ping-pong balls gold for the bodies, spray painted white feathers silver for the wings, and then joined them together with hot glue. 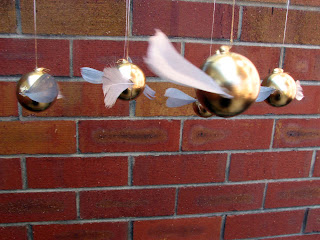 I can't wait to hang them up on my Christmas tree! ^_^

All of these projects were for the Harry Potter craft-a-long Quidditch challenge. Slytherin House was loosing miserably, but these projects constitute an 80 point increase, which means we're now level with Gryffindor. Go Snakes!