Hello! Do you know what your house is missing? That's right, a dinosaur display stand that is perfectly sized to hold one mini cupcake. It's just so practical! 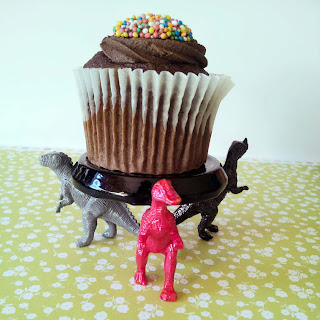 Mmmm, ok, so I'm lying about the practicallity thing, but it is cute! And easy to make! And involves both dinosaurs and cupcakes! (I've sold you on this now right?) 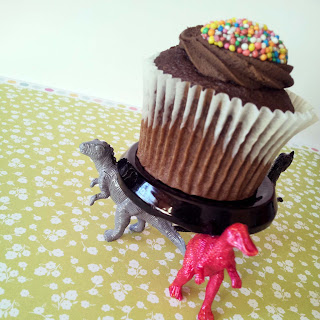 Awesome. So, here's how you can make your own!

1. Gather three plastic dinosaurs of approximately the same height. This is important, because you don't want your display stand to be lop-sided. You'll also need a jar lid. Mine is from a jar of korma curry paste (yum!).

2. Paint everything with nail polish. I used Rimmel "Be a star" (for the pink dinosaur), Rimmel "Grey Matter" (for the grey dinosaur), Revlon "Midnight Affair" (for the dinosaur that looks black but is actually dark blue), Revlon "Grapefruit Fizz" (to make that same dinosaur glittery), and Revlon "Black Lingerie" (ooo, risque!) for the jar lid. 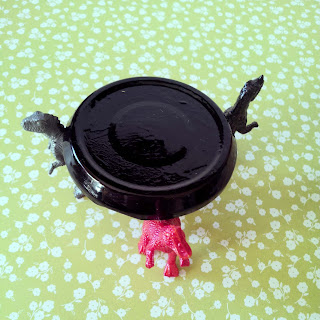 3. Once everything is dry, arrange your dinosaurs like shown in the picture above. Place the jar lid on top of them and use a Sharpie to mark where it sits.

4. Remove the jar lid and put a bit of E6000 glue on each mark. Leave it a couple of minutes so it becomes tacky, and then carefully replace the jar lid. 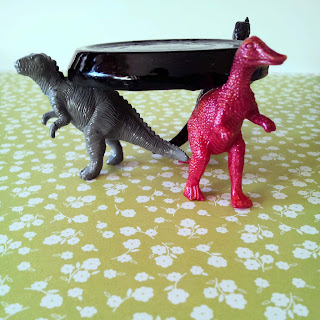 5. Leave the stand for 24 hours to ensure the glue is properly set. 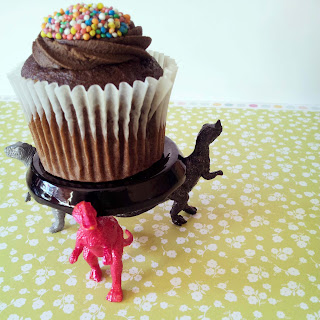 What do you think? I hope you like it! I've still got heaps of dinosaurs, so I think you'll be seeing a few more prehistoric crafts around here ^_^

also, alliteration for the win!

Thanks Tanya! I just can't resist a bit of alliteration! It's one of my favourite literary devices ... onomatopoeia is probably on the top of my list though ~_^