Hello! How are you doing? Today is my second offical day of Study Break and I have certainly not done any studying ~___^ Instead, I've been working on finishing off some projects from the huge box of WIPs. So, so many abandoned projects; it's sad really. And also I've started some new projects because I am not the kind of person that will ever have all of her crafts actually finished. 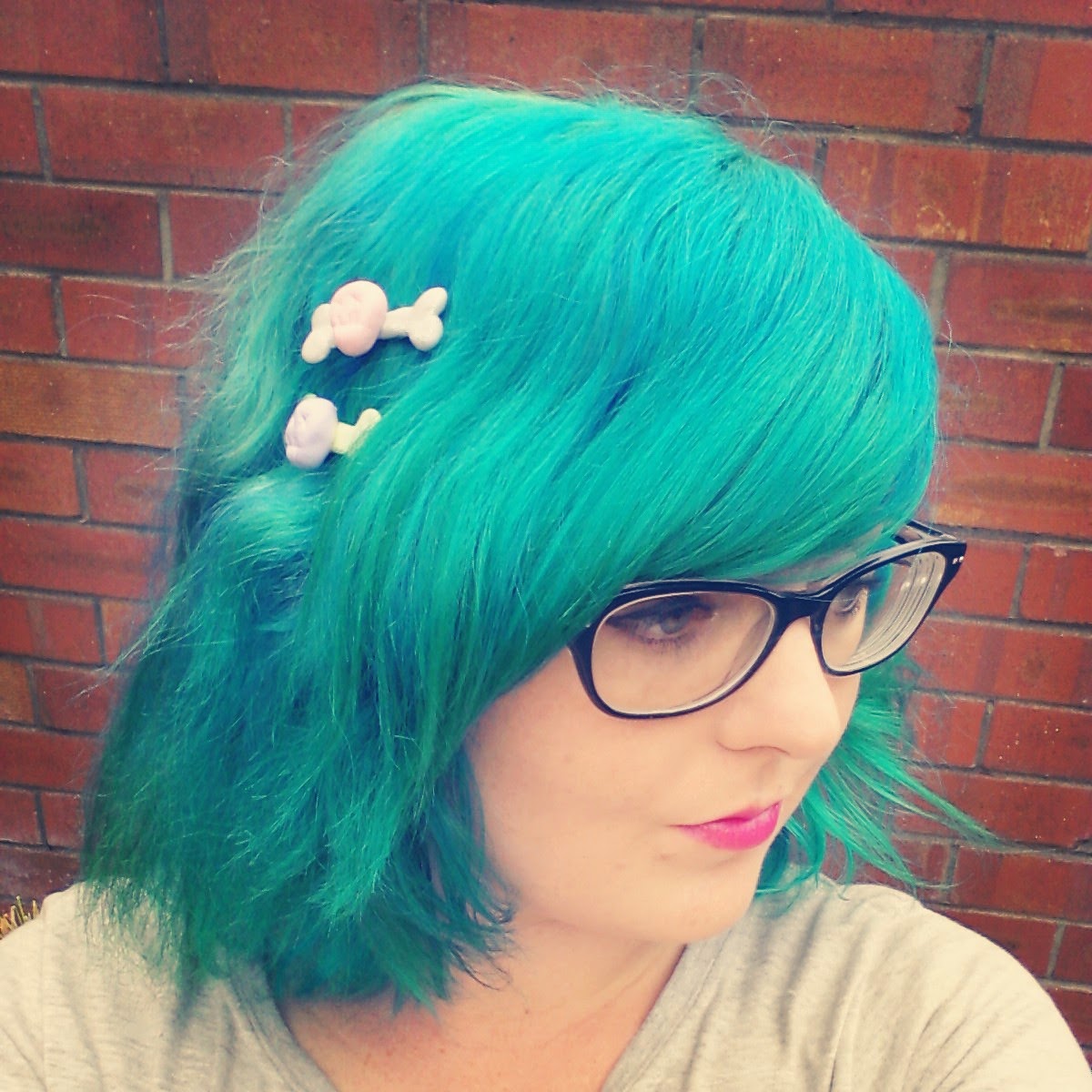 This is one such project; I decided the other day that I wanted a hair clip shaped like a bone. I have no idea why, I just suddenly really wanted one. So I sat down with some sculpey and made some bones. And then I made some skulls. And then I burnt them (oops!) so I had to paint them. 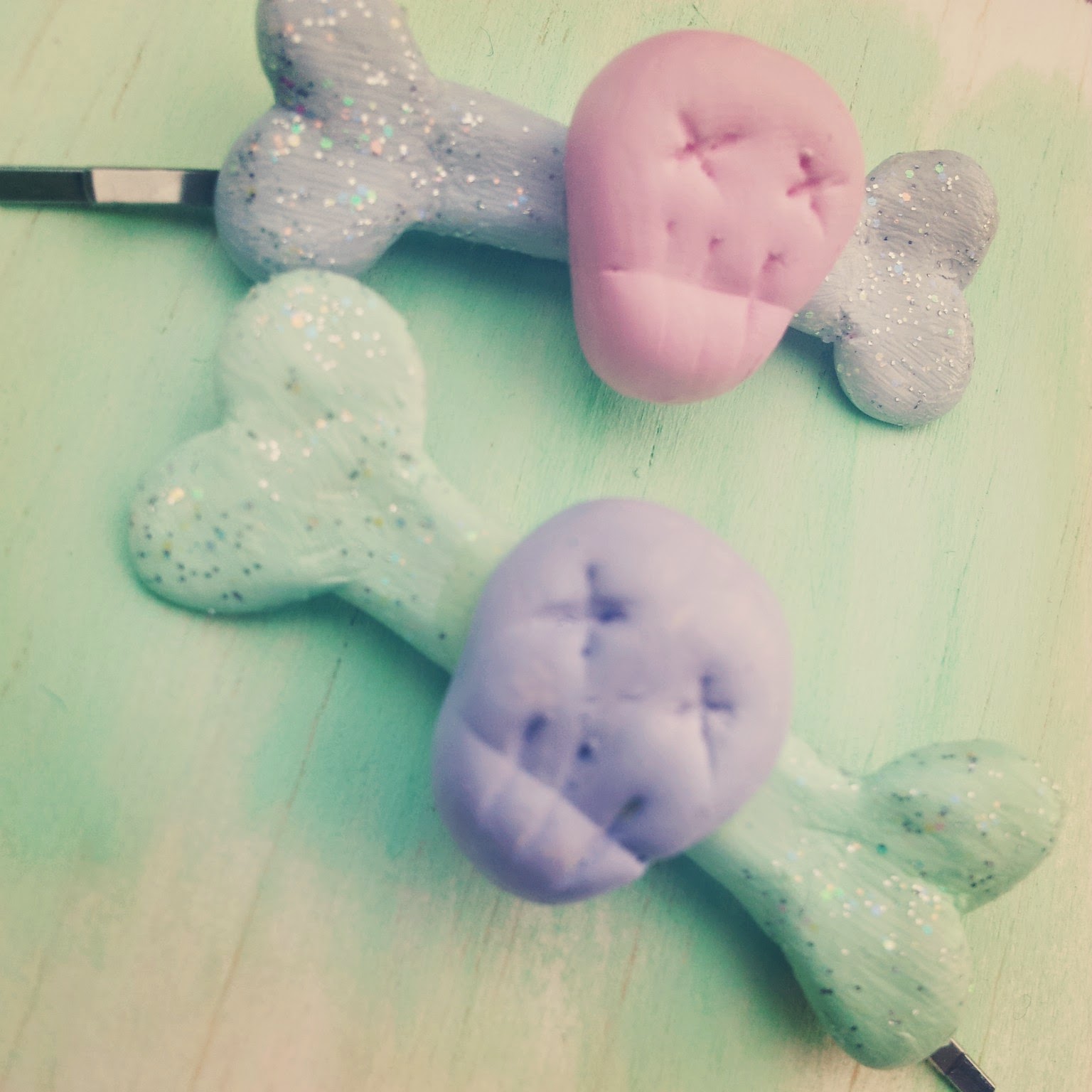 I originally spray-painted them white, but then I decided that they should be pastel. And glittery. Because, why not, right? ~___^ 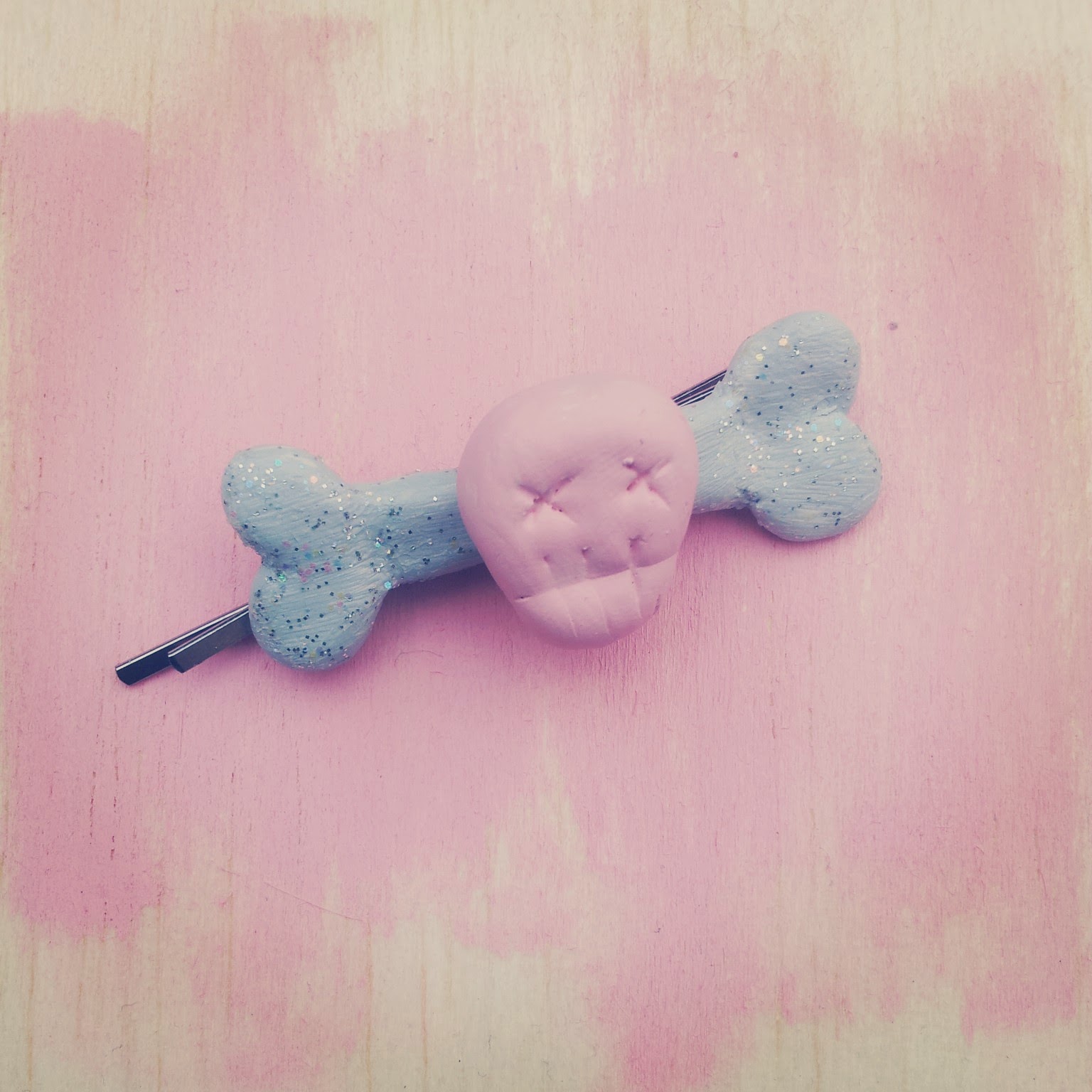 I use Scott's Warhammer paints to paint my sculpey but of course those paints only come in dark, army-type colours; no pretty pinks in sight! So I mixed a drop of each of the acrylic colours in with some of the Bone White Warhammer paint  to create my pastels. It worked really well! I think because I used only a tiny bit of acrylic the paint still adherred really well to the sculpey. After I'd painted the bones, I gave them a thin coating of glittery Mod Podge; I absolutely love the subtle sparkle it gives the bones ^___^ 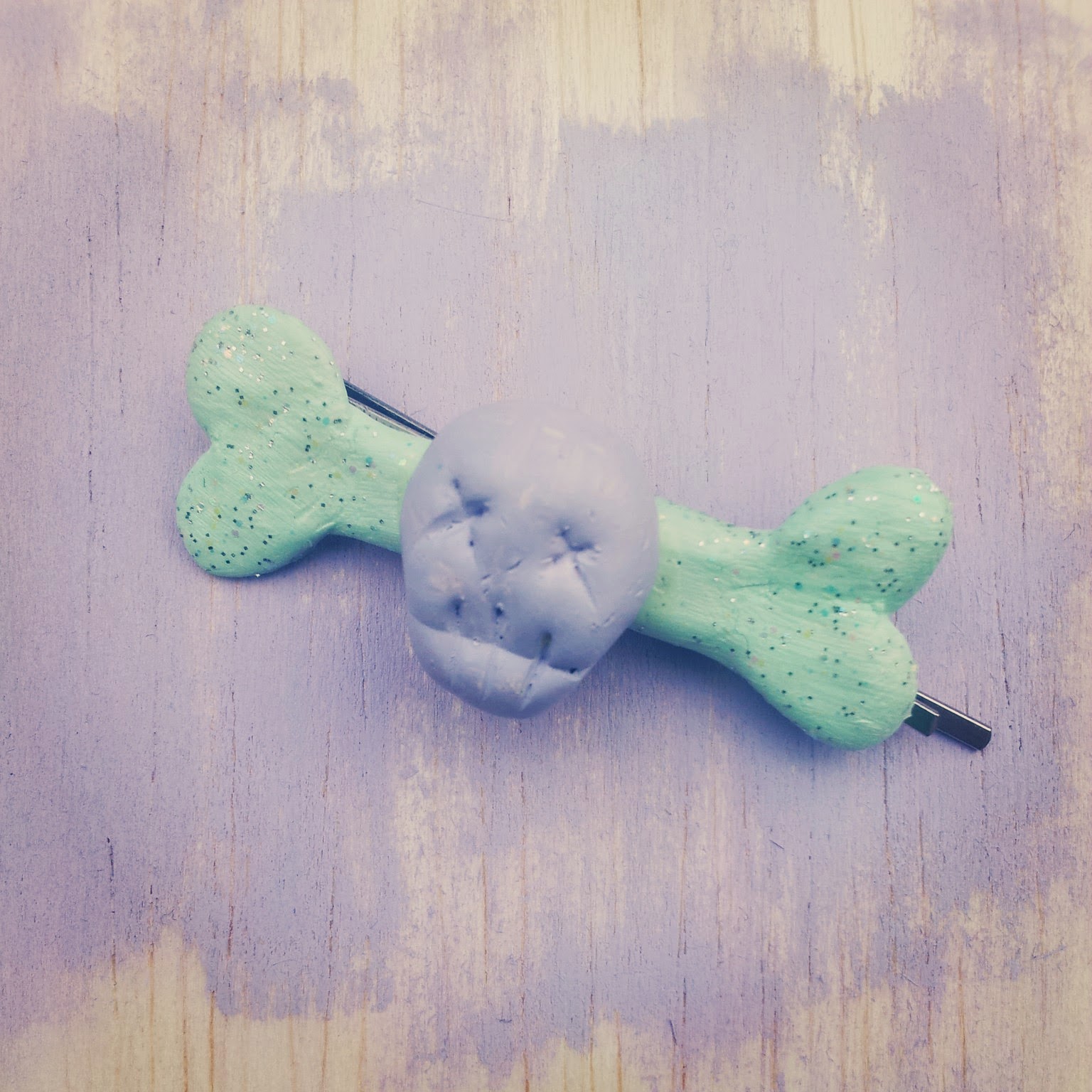 I was going to attach alligator clips to the back of these, but then I found some great pins in the milinary section of Spotlight. They look just like bobby pins except they have a metal circle on the end of them which made them really easy to glue to the back of the bones. I wish I had found them before I made the bones though, because, as you can see, they are a teeny bit long and stick out from behind the bones. 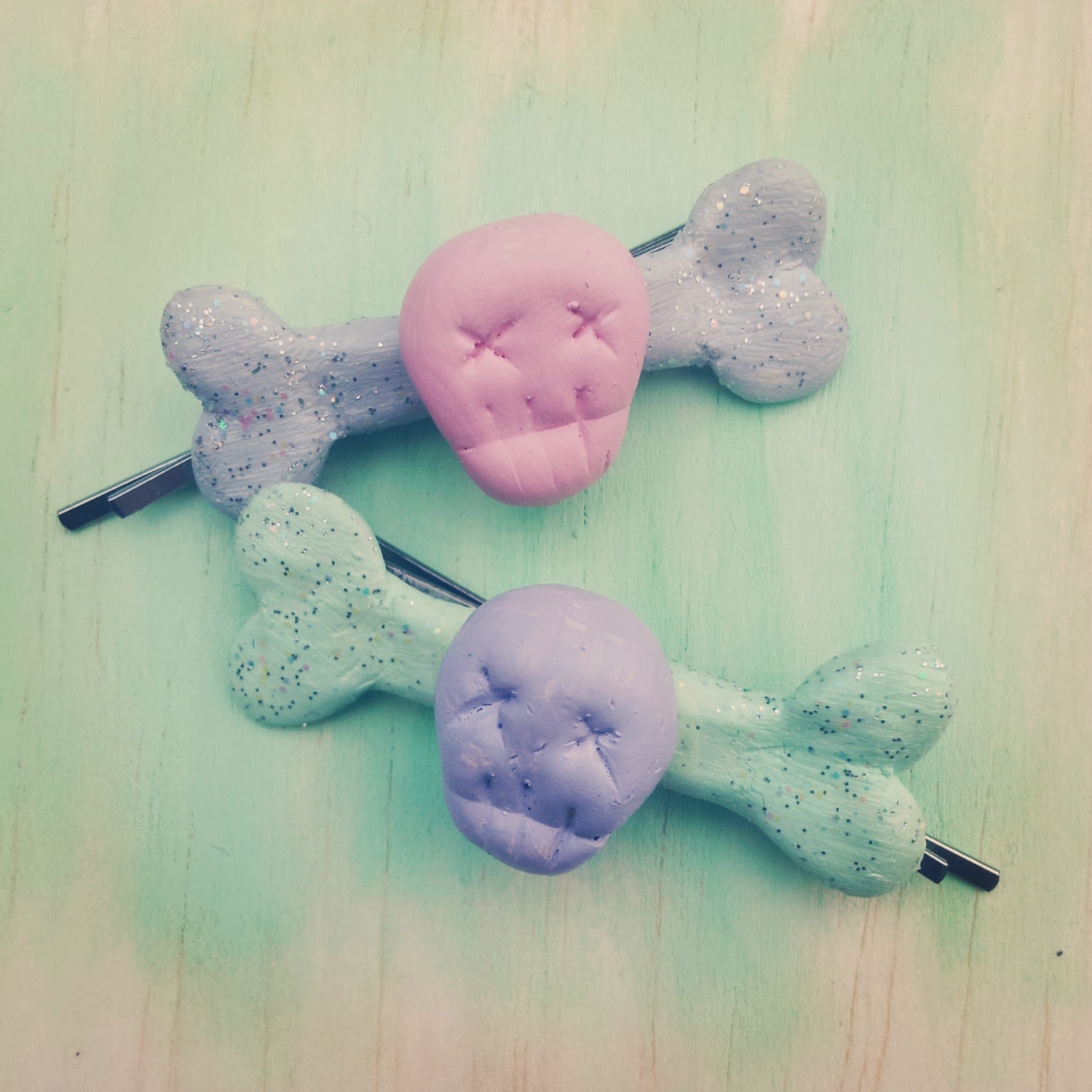 I really like how these clips turned out but they are a little tricky to photograph; I took a whole set of photos yesterday but they turned out too blurry (for the close-ups) and limited in detail (for the in-action ones). So I took some new ones today but you can see from the photos with me in them that I'm still having some trouble with the latter problem; I wondered maybe if because they were so pale they were reflecting the sun too much? I don't really know. I included a couple of the in-action photos anyway, so you could get an idea of how big they are. You'll just have to imagine that you can see a bit more detail then the photo actually provides ~___^ 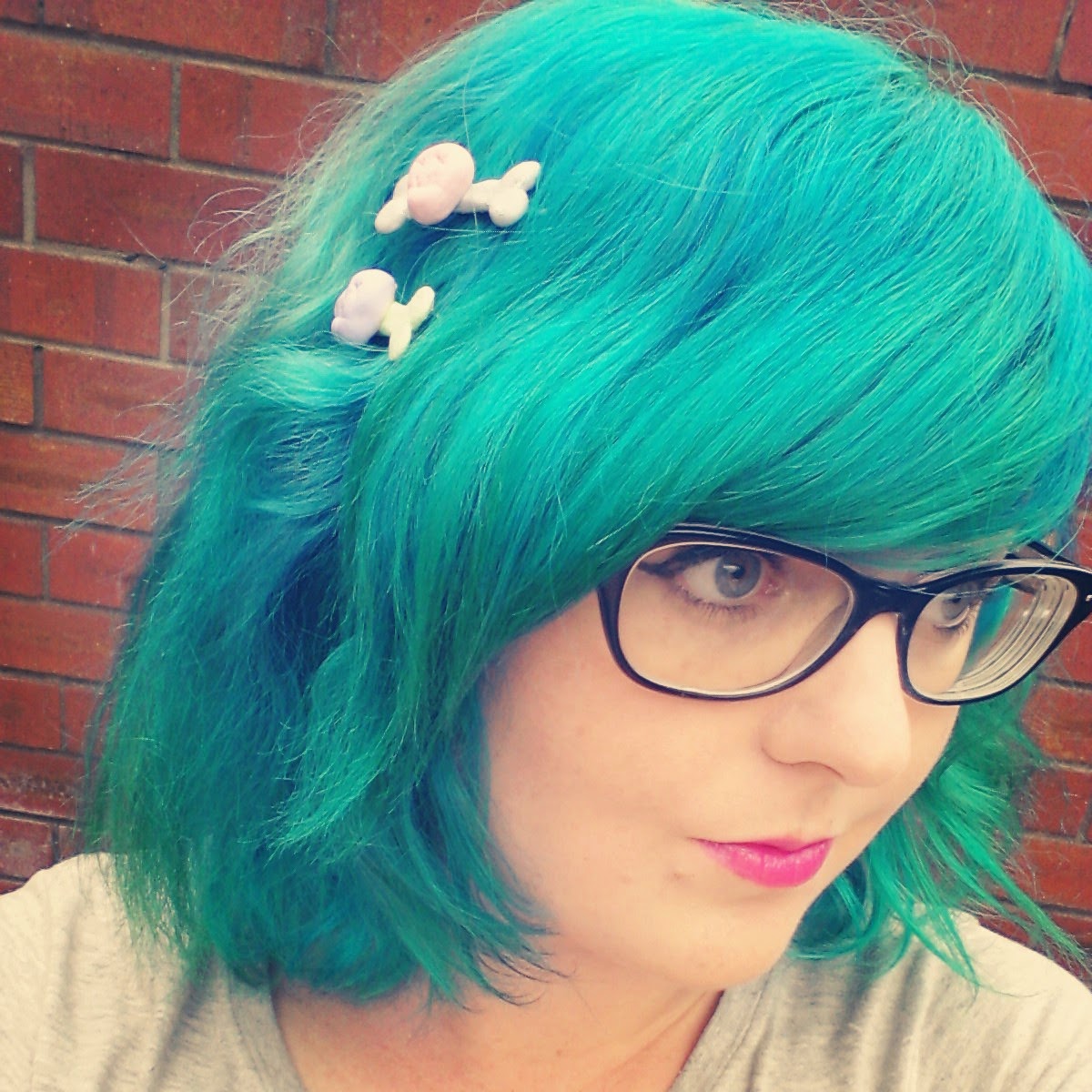 I wore them into the city today as Scott and I checked out the new Codex release at the Warhammer store; but I didn't tell the people there that I've been using paints for non-army related purposes. That'll be our little secret, ok? ~___^

your secret is safe here.

they look fantastic in your hair too!

Thanks Tanya! I really liked how the pastels looked against the bright blue ^___^