Morticia and Gomez clay dolls and a TV cake

Hello! Recently my lovely friend Clare had her birthday party, which had the absolutely awesome theme of Cult Cinema Characters. I had so many ideas of things I could have made for her gift, but after I saw a gorgeous papercraft ornament of Morticia and Gomez, I knew I would have to craft a tribute to the cutest spooky couple of all ^____^ 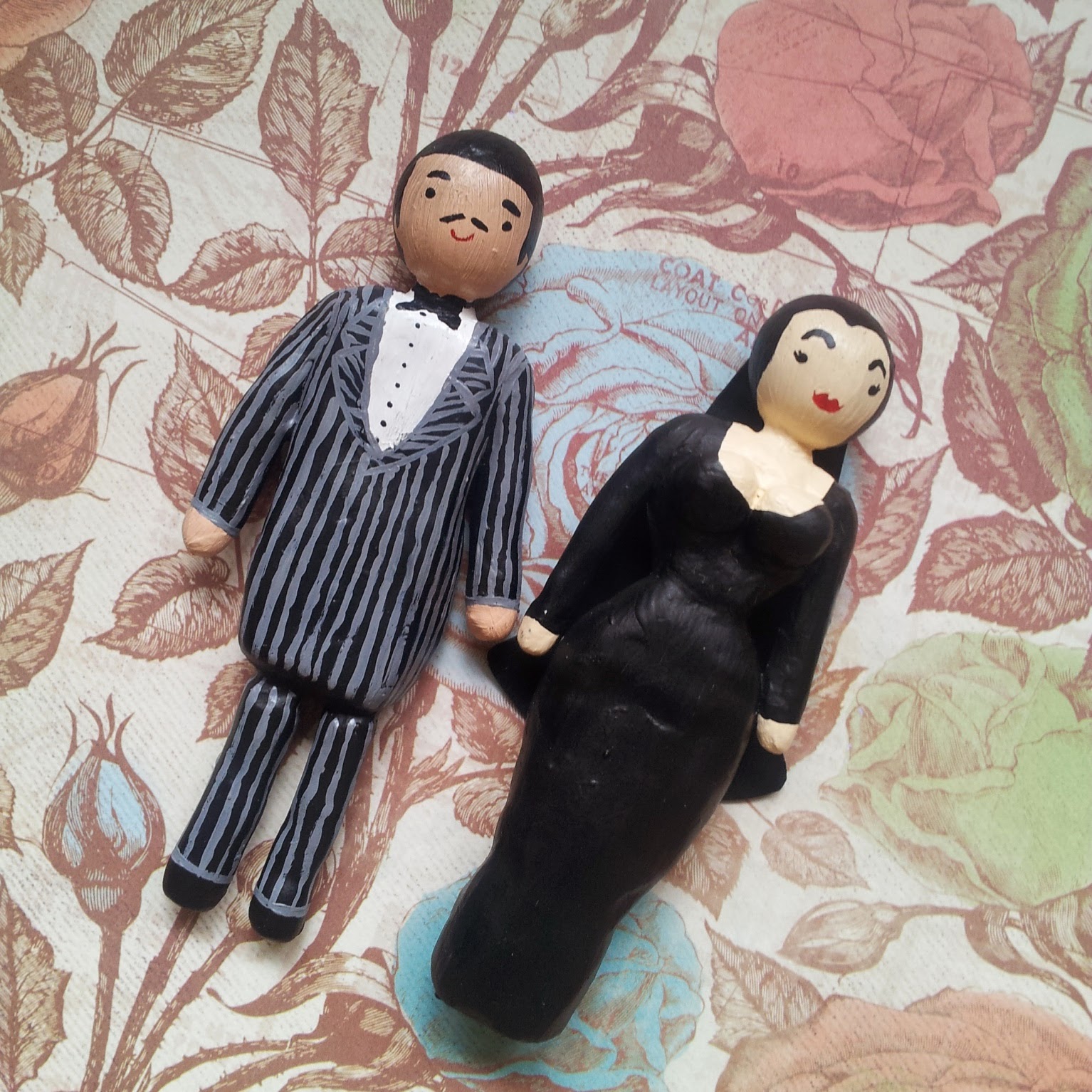 Eeep! Aren't they cute? I made my Morticia and Gomez from polymer clay, which I then painted. It wasn't particularly hard, but it did take a long time! 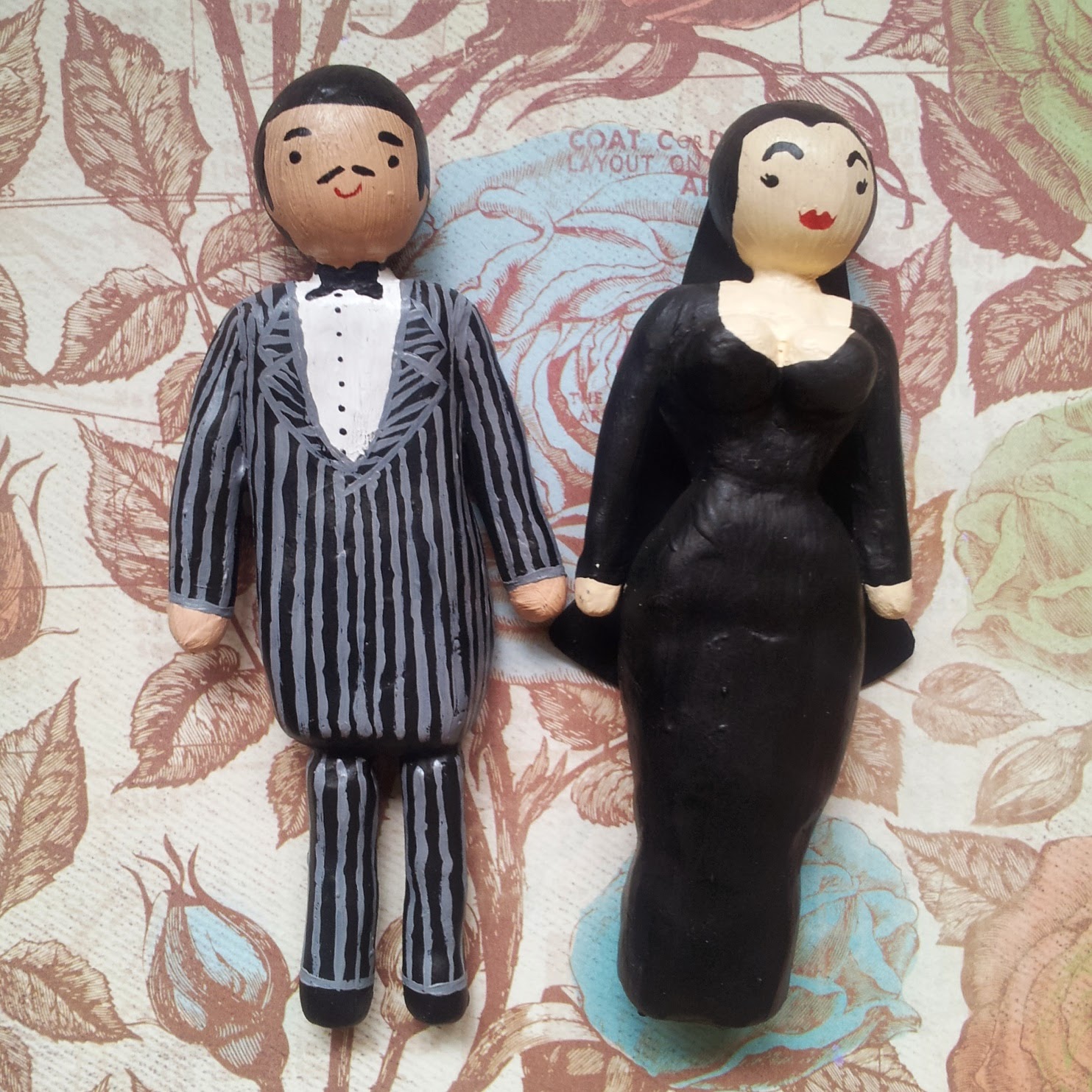 I completely forgot to measure them before I gave them to Clare, but I think they were about 12cm long. They have wire armature in their arms (and legs, in the case of Gomez) and a long wire going through the middle to connect their heads, necks, and bodies. After I sculpted their bodies, I tried to smooth down the clay using a little bit of water and my fingertips, but they didn't end up quite as smooth as I would have liked. However, after they were painted, any bumps were much less noticeable! 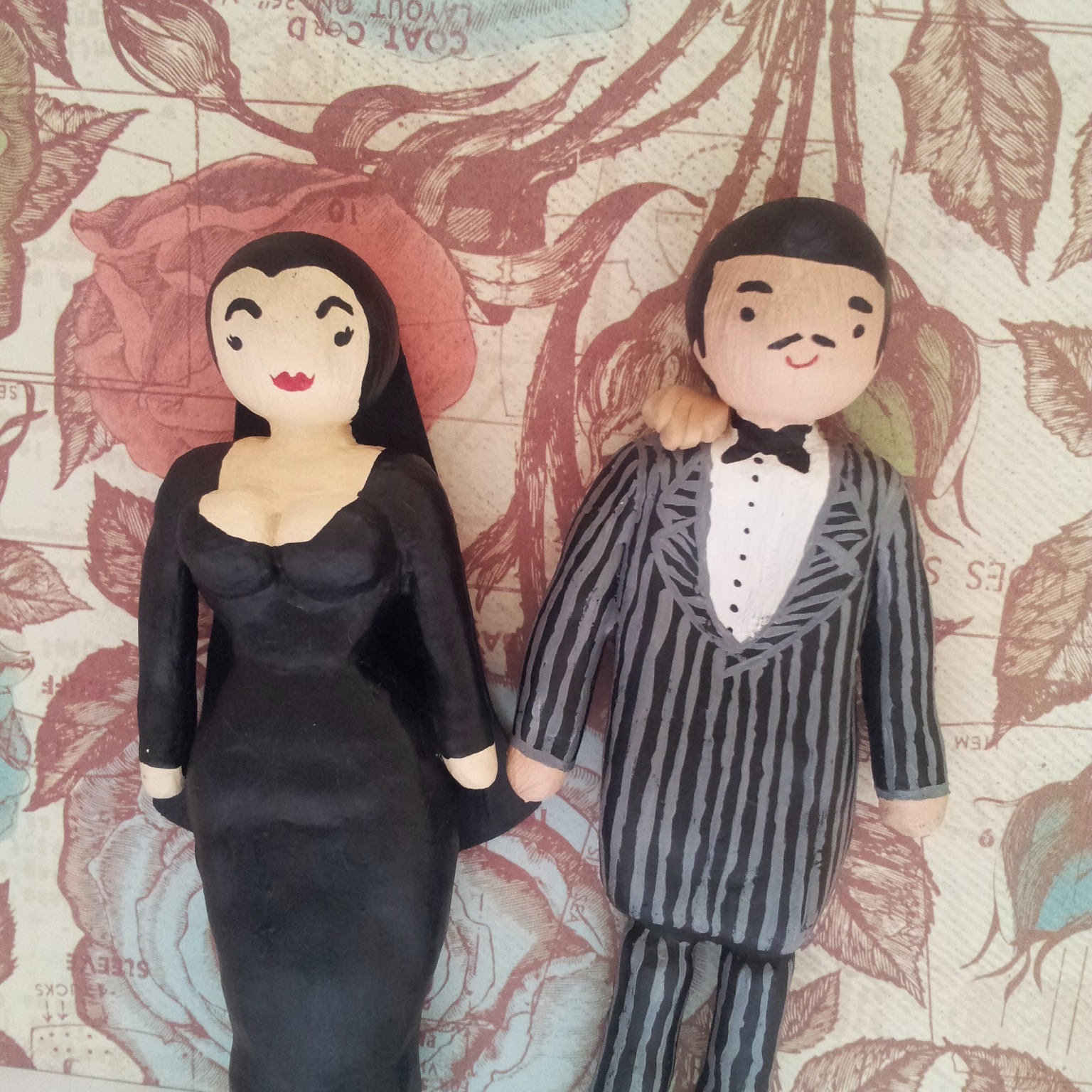 I based my Morticia and Gomez off the Addams Family Values movie, instead of the original TV show. There probably isn't all that much difference really, but I found it really helpful to look at the cast photos for details like Morticia's hair and Gomez's suit. 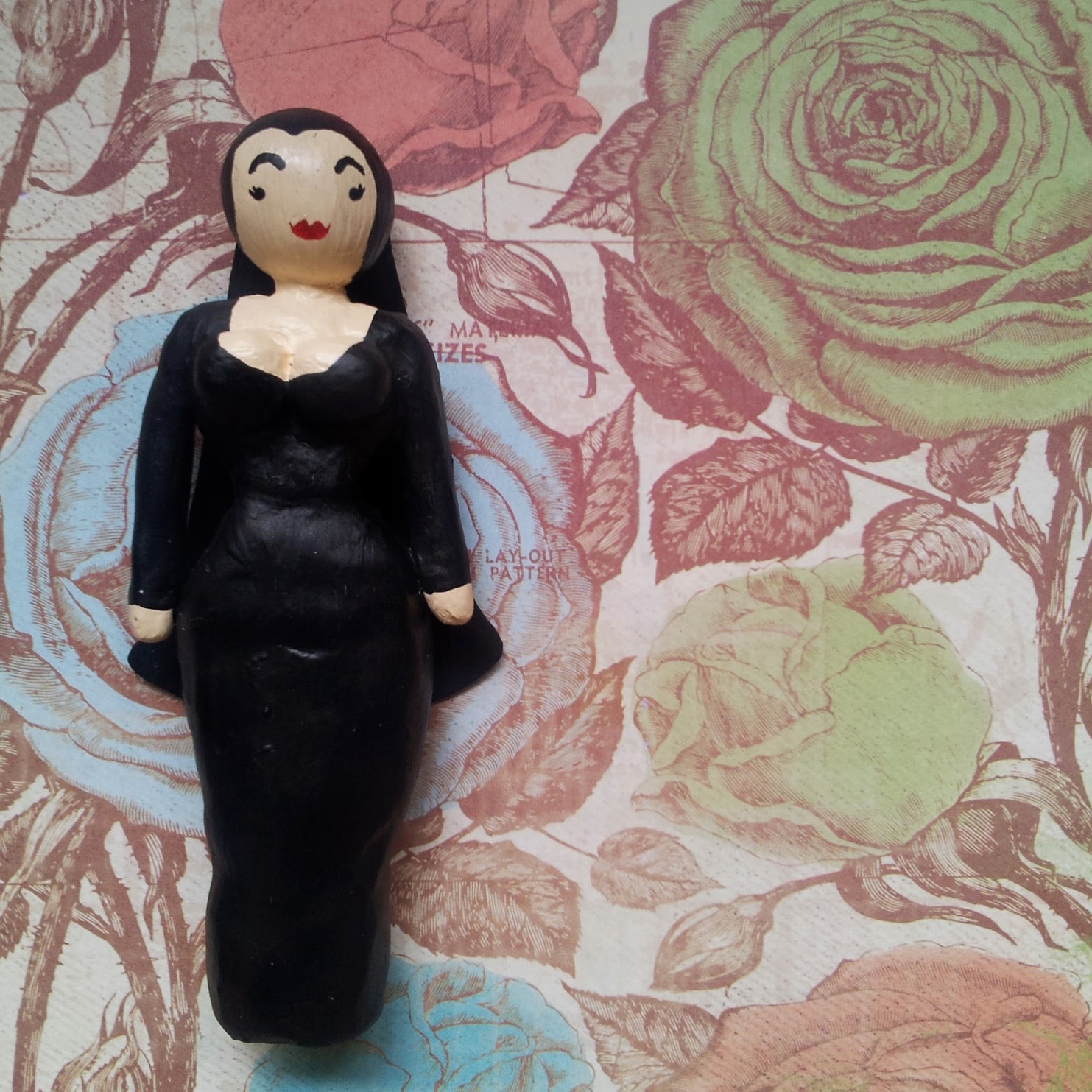 I used acrylic paints to add most of the details, but Morticia's long hair is actually made from a piece of thin cardboard. I was indecisive about her hair for quite a while; I originally planned to add some fake hair from my Blythe doll kit but then decided that would be too messy to attach properly. Then I thought I would just leave her as is, but she just wasn't really recognisable without that long hair! If I hadn't been so indecisive, I think a piece of thin clay would have worked a bit better. 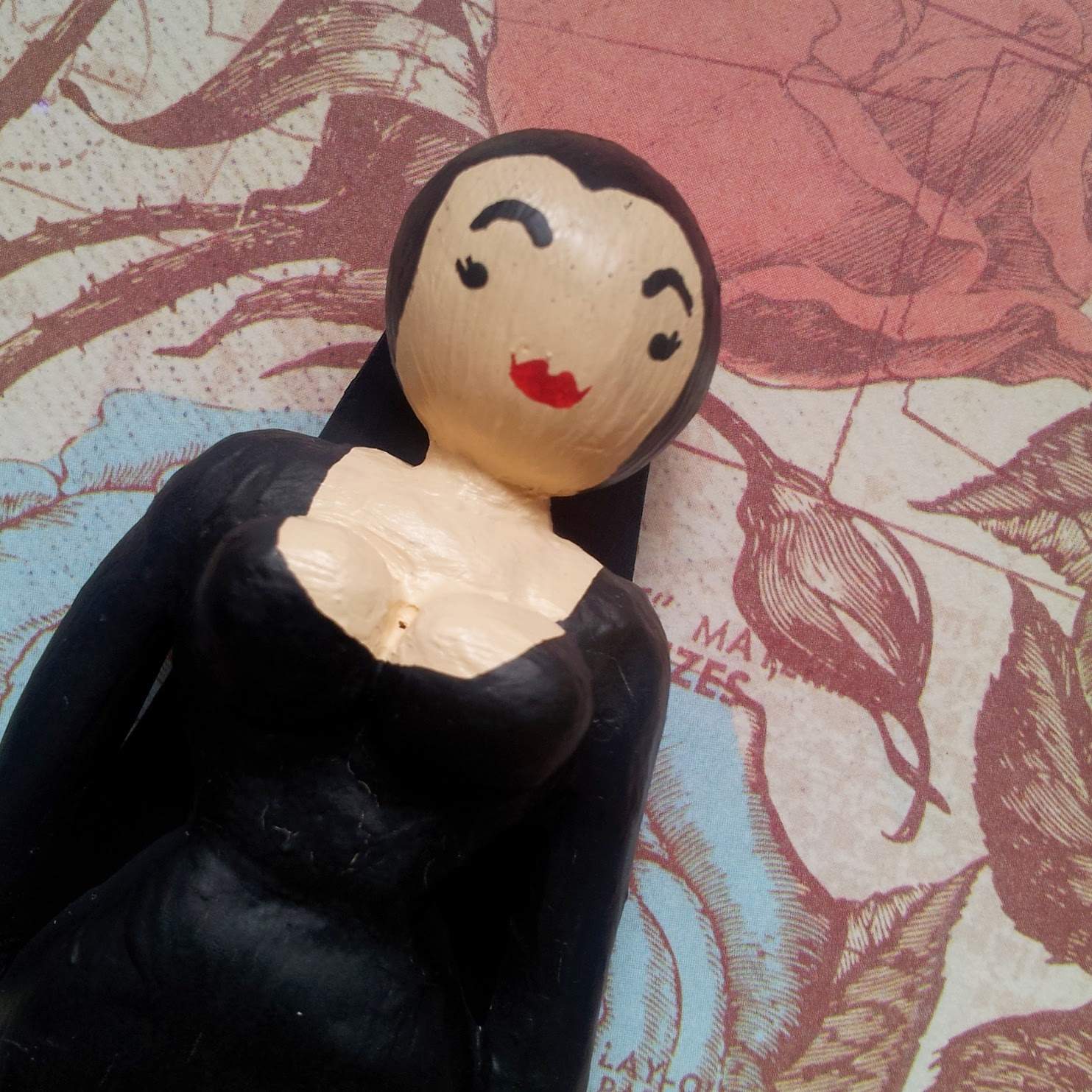 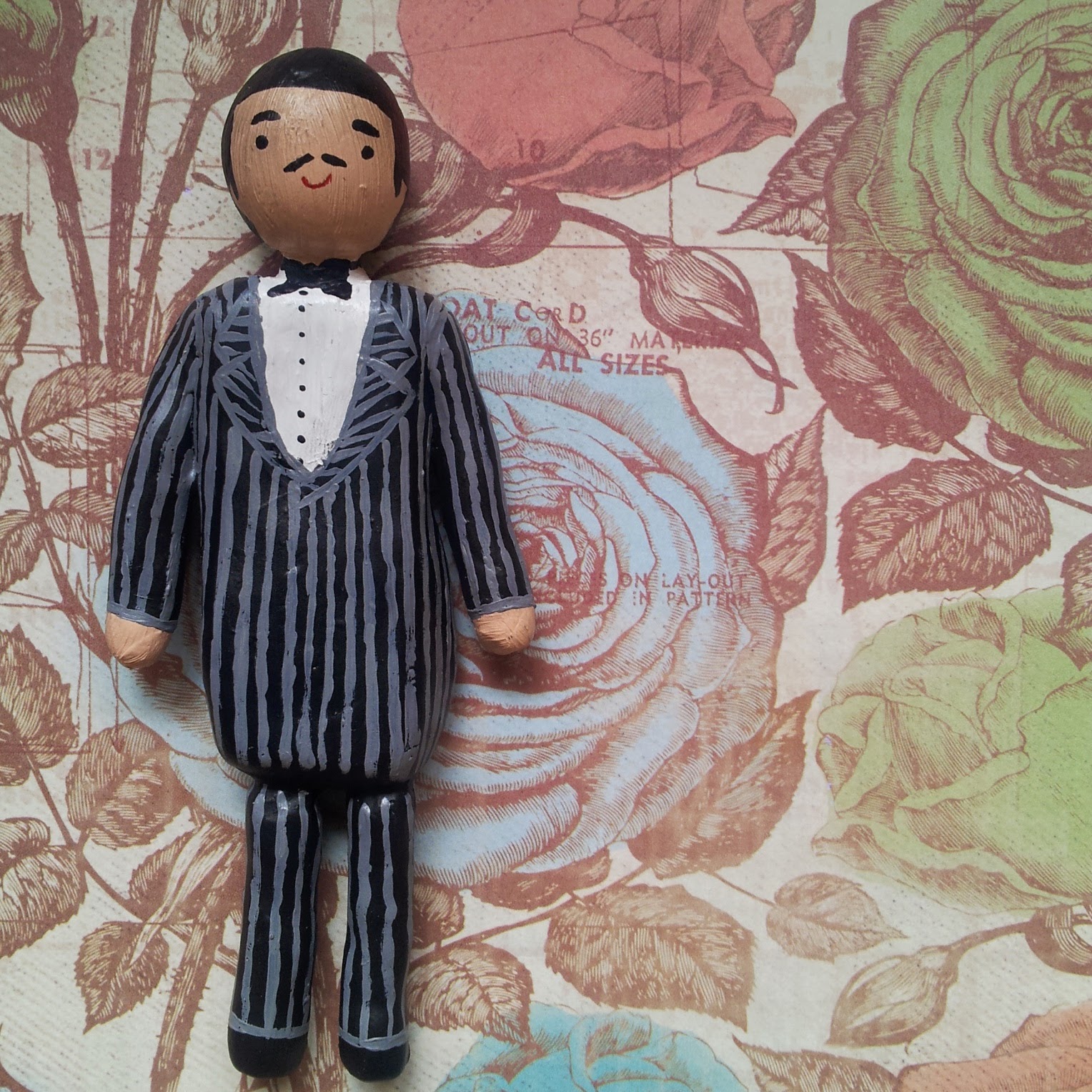 Gomez's suit was definitely the hardest part to paint - all those pinstripes! You can see that my fine brush control still needs some work here ~____^ 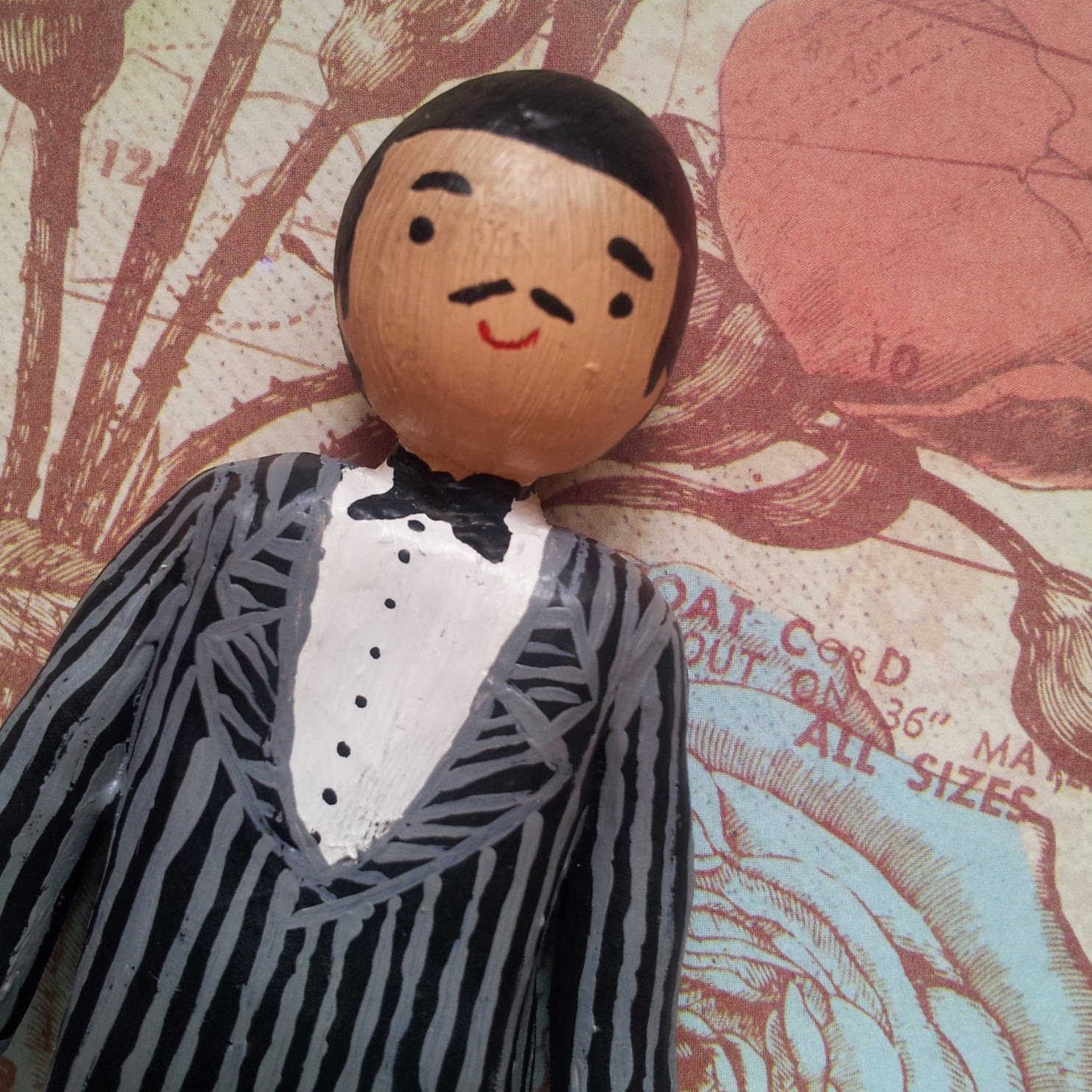 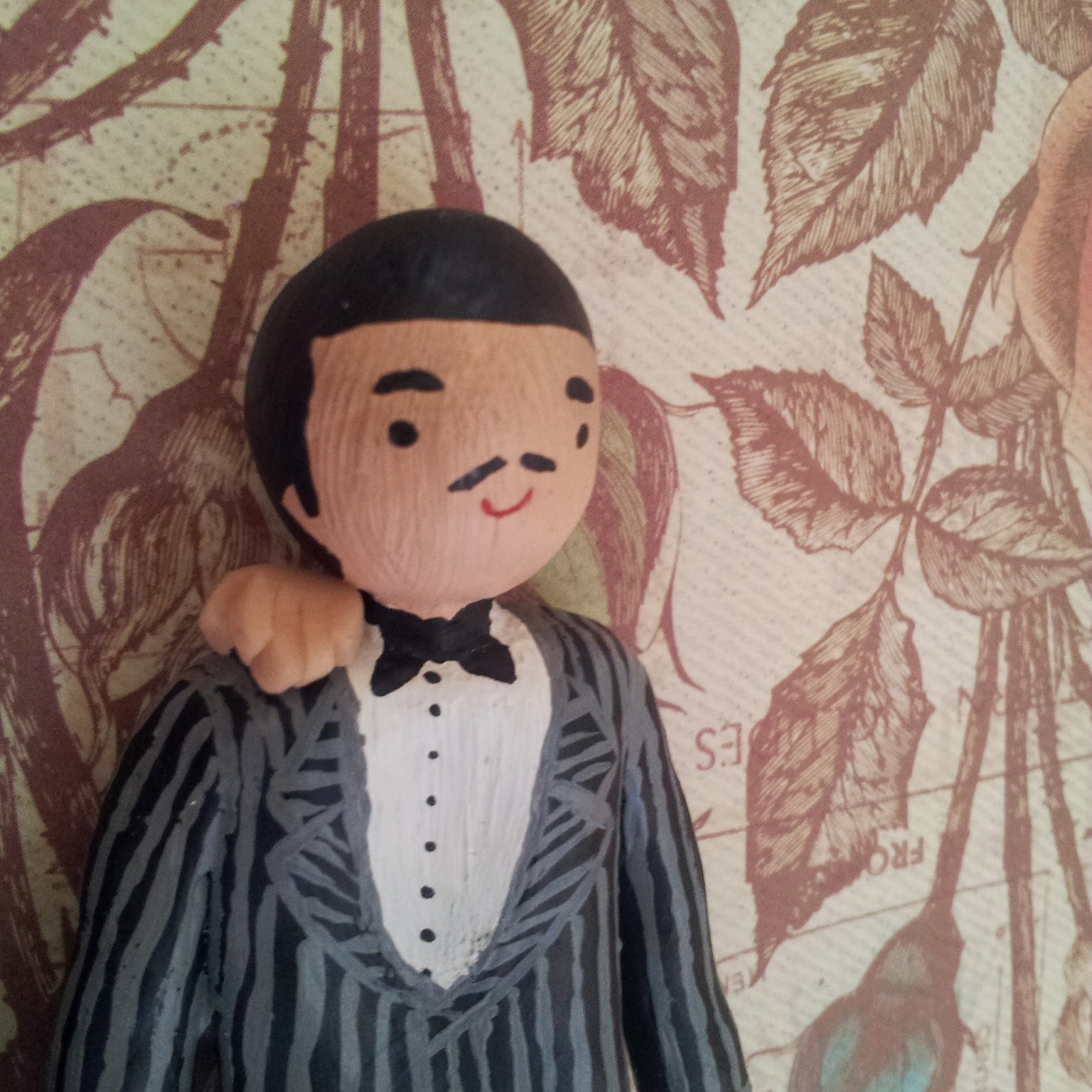 After all of the painting was done, I gave them a couple of coats of matt spray varnish, to hopefully ensure that they don't chip, or flake, or become too dirty. I also made a tiny Thing to sit on Gomez's shoulder with a scrap of clay. Thing balances perfectly on Gomez's shoulder - which makes me very pleased! 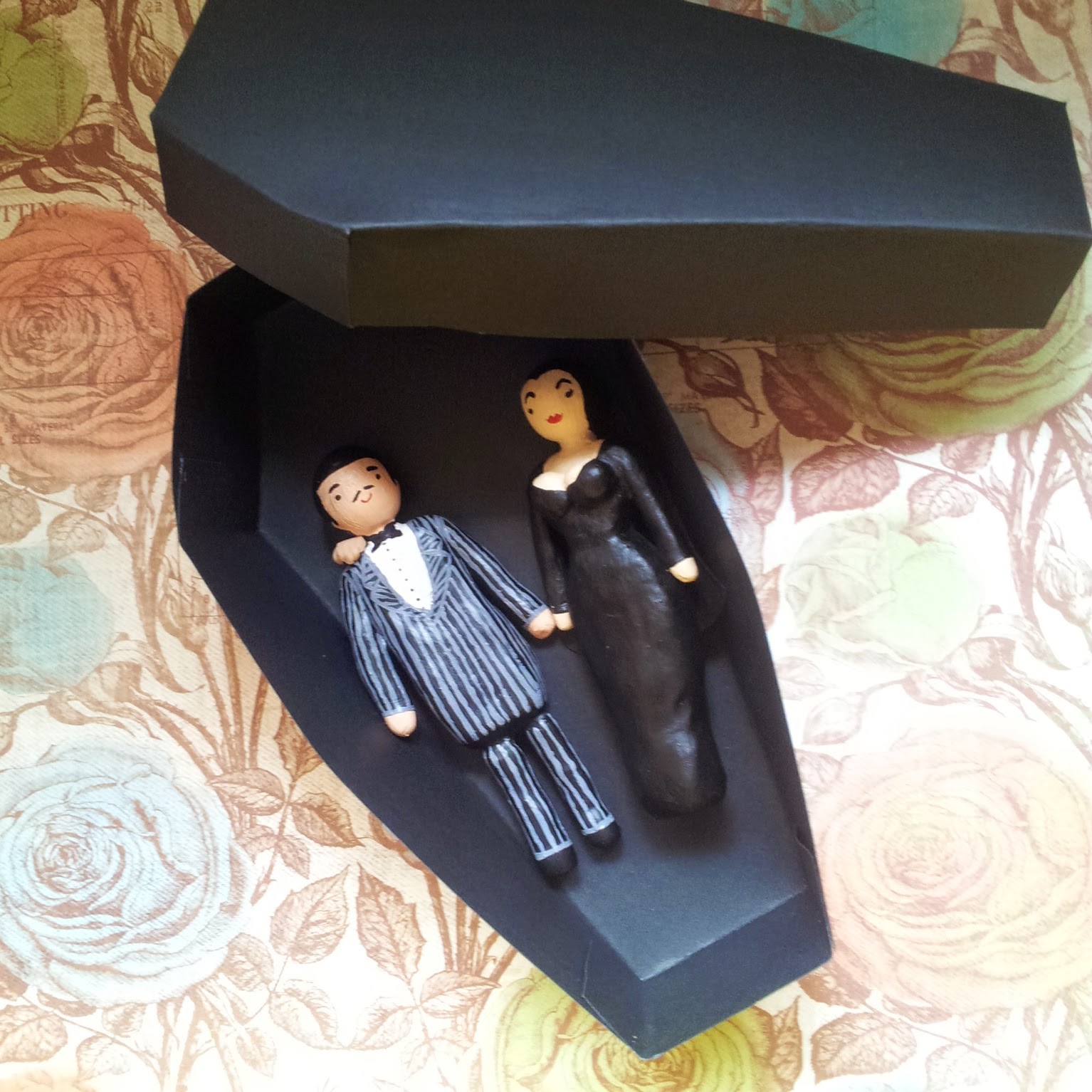 I used some black card stock to make a coffin shaped gift box for Morticia and Gomez to go in; really, what else would have done? After spending so long making these two, I was getting a bit worried that Clare wouldn't like them. But I needn't have - Clare loved them! ^___^ 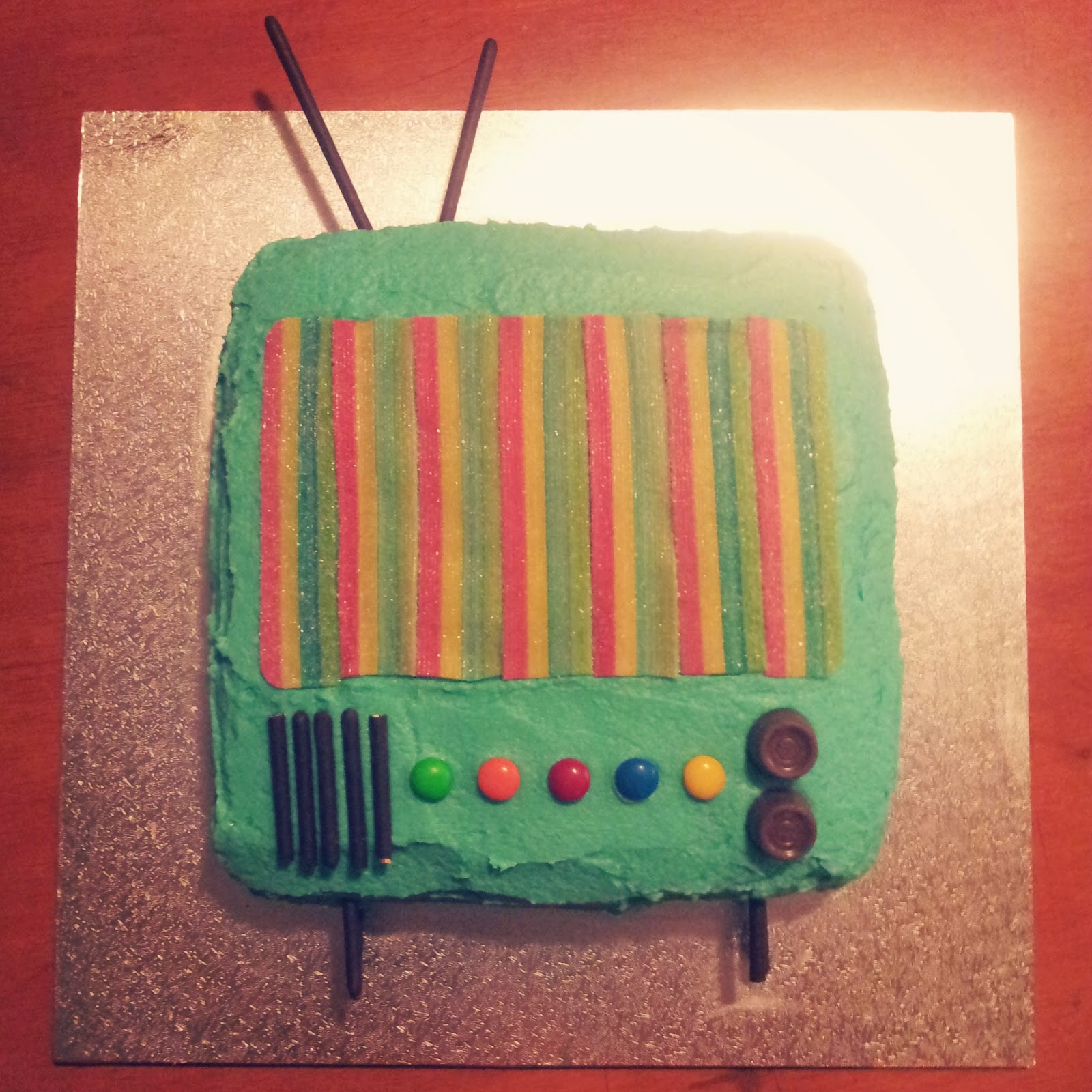 Rebecca and I also decided that Clare needed a cake; any occasion is better with cake, right? And if it's a novelty TV cake, then it must be extra better! ^____^ I used a 23cm (about 9 inches) square tin and a double quantity of my ANZAC cake recipe. 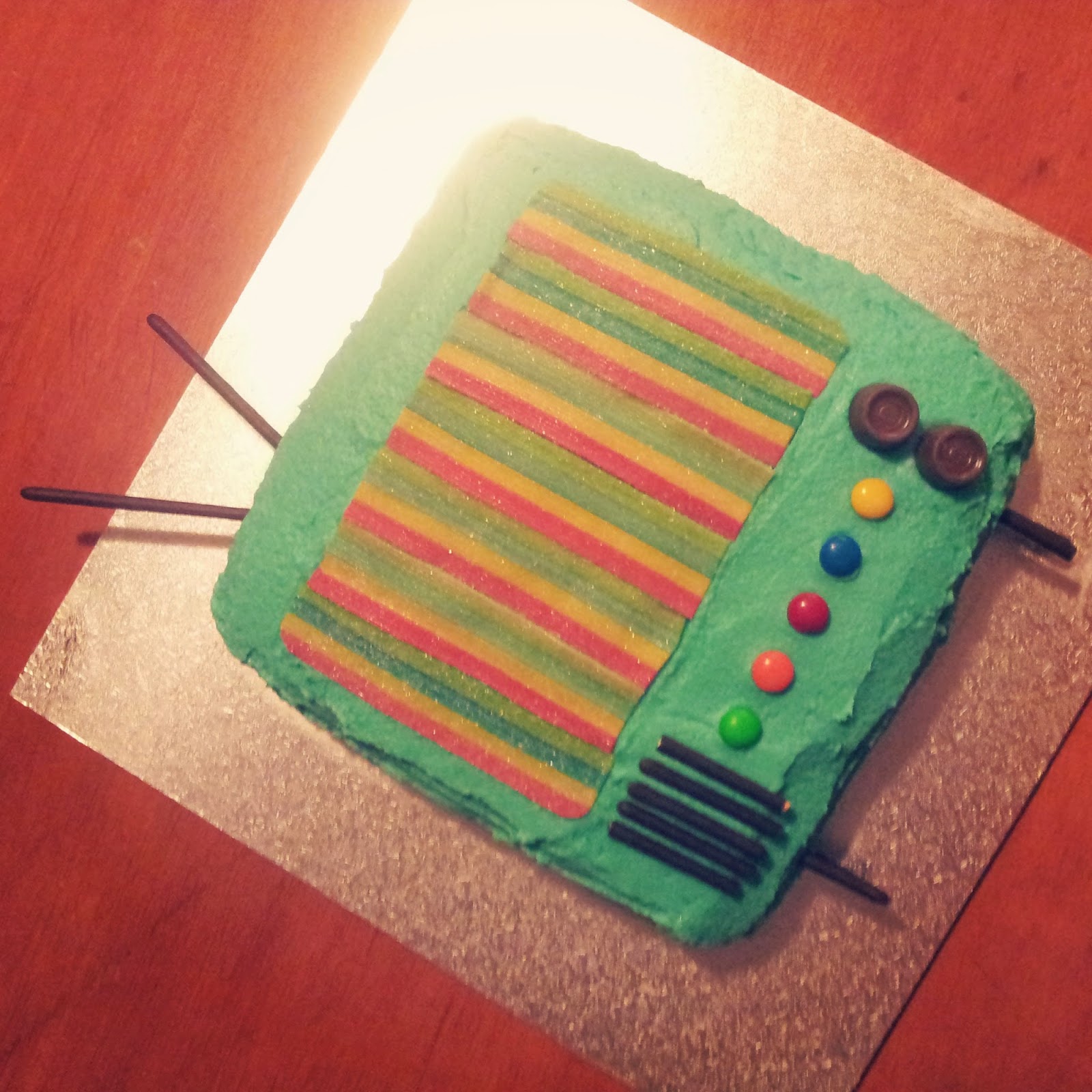 The icing was made with unsalted butter, icing sugar mixture, water, and a touch of blue food colouring. This cake was a little difficult to ice, since it has a rough texture, but with enough icing anything is possible and it turned out looking alright ~___^ 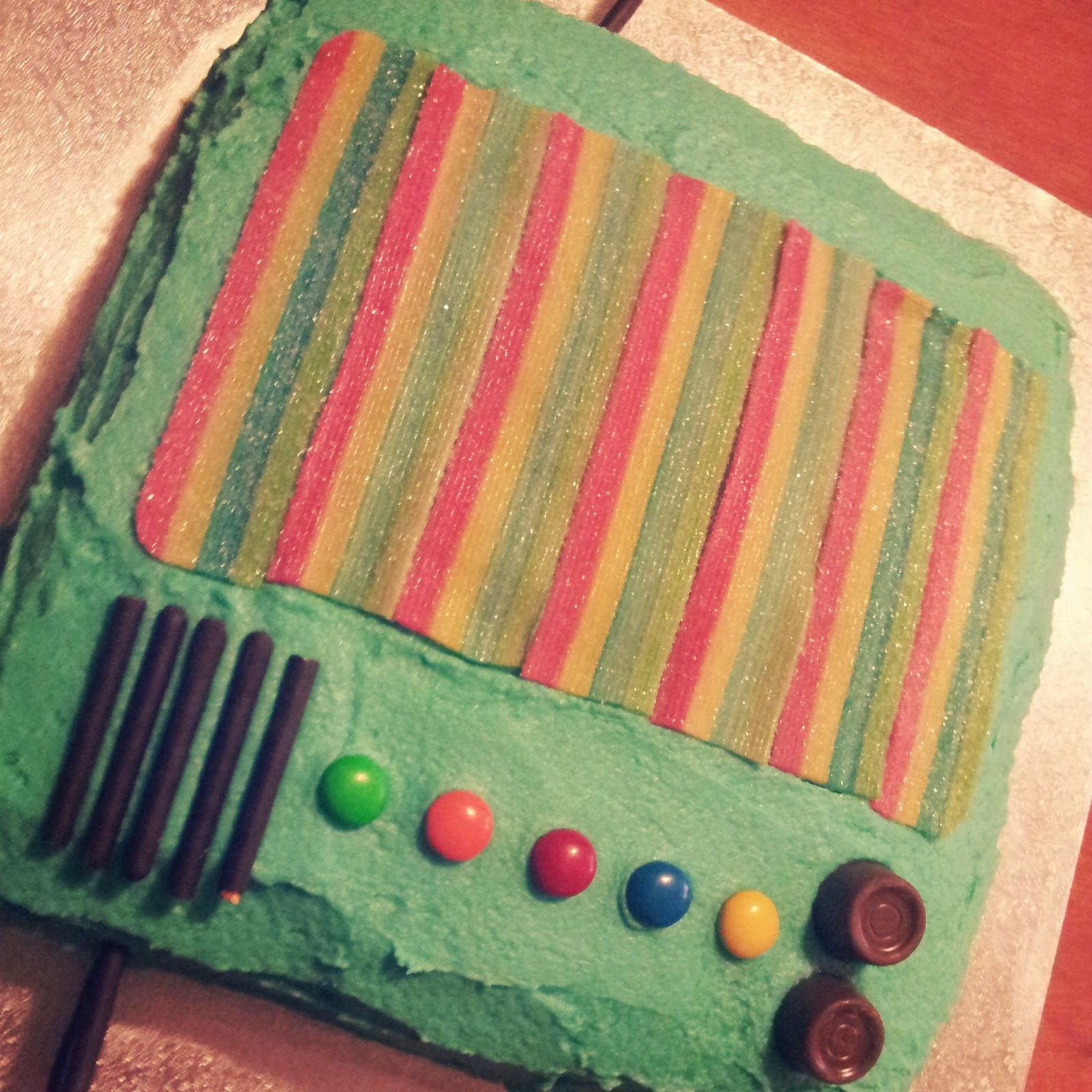 The fun part, of course, is decorating! Rebecca had the excellent idea of using sour stripes to make a screen reminiscent of the old TV test pattern. All we did for this was draw a line in the icing where we wanted our screen to be, trimmed any stripes that were too long and rounded the corners of the two stripes on the ends. If you weren't able to find sour stripes though, I thought Scott's suggestion of making white noise using black and white sprinkles was quite inspired! The bunny ears aerial, the legs, and the speaker grill were made with chocolate Pocky, the coloured buttons are M&Ms, and the two dials are Rolos. It was a big hit with the party guests, and Clare really loved it too - huzzah! ^____^ 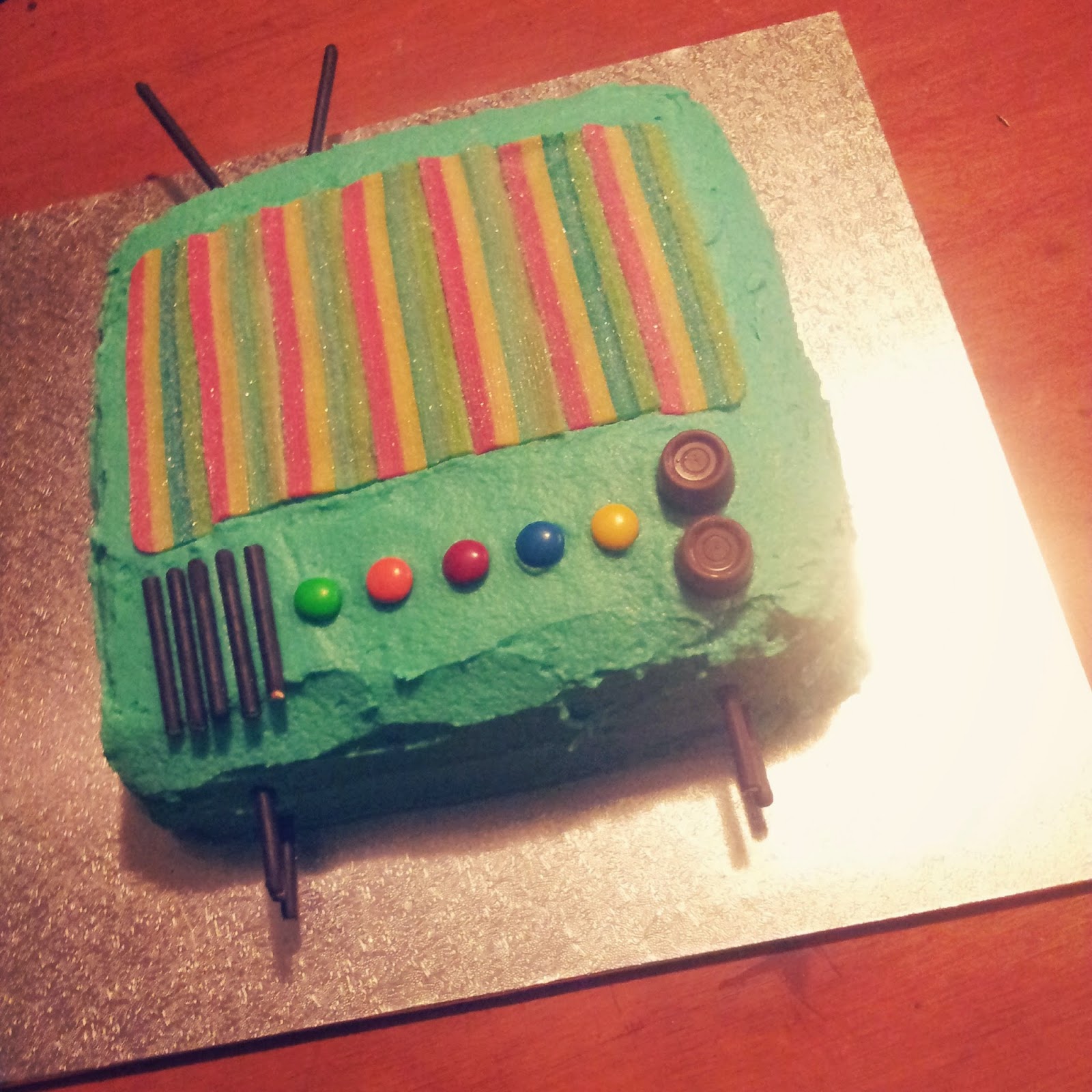 There's less than a month until Scott and Pip's birthdays, so more cakes will be on the agenda soon! But I shall see you next week with a jewellery project, and maybe even an amigurumi! ^___^

Oh, they're adorable! You did a really good job ♥
Amy xx

These are too cool, love that you made Thing to go with them!