Hello! So, usually at my crafternoons everyone just brings whatever they're currently working on and we just sit and chat and eat cake and even occasionally craft ~____^ But when the last one was still in the organisation stages, one of my new-to-crafternoon friends asked, "what are we making?" And so we decided that it might be fun to all focus on making a specific project! We did a little vote on crafts and the winner was the Pretzel Pillow by Studio DIY! 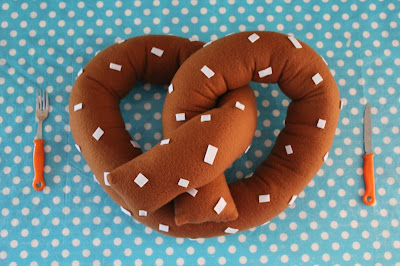 We used brown polar fleece to make our pretzels, and stick on felt for the salt. The backing on the felt is not super sticky, but so far mine has held up ok! I know Bec has been adding some little stitches to her salt pieces to ensure they don't fall off, but the sticky backing actually helps a bit with that, since they don't move while you sew! 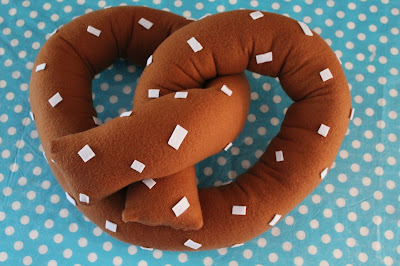 Bec and Miriam cut our strips of fabric to be 30cm x 200cm, which is little bit bigger than Kelly's instructions recommend, but it worked out fitting better to our fabric ^____^ Boulder and Fran cut up felt salt flakes and I used my sewing machine to turn the fabric strips into tubes.Then we turned them right way out. This part was surprisingly tricky! We left the holes large enough to fit a hand in, but then the tubes were so long, we had polar fleece bunched up around our elbows! We were thinking that a piece of string sewn into the end of the tube might help with the turning, but we didn't try it out (since all the tubes were sewn by the time we started coming up with ideas!). 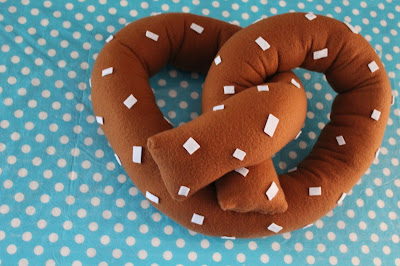 A long dowel is super, super helpful for stuffing and I think we probably used about 1.5kg of polyfill between five of us (which doesn't sound like much, until you remember how light that stuff is!). Then all we had to do was twist and tack and then stick on the salt! 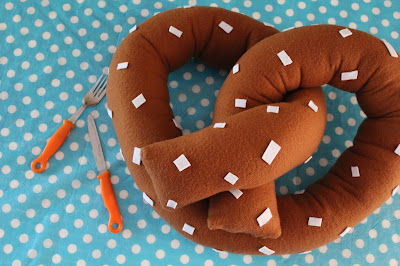 All of our pillows turned out super cute, and we took a group photo to celebrate! Trying to get us and our pretzels in the photo was a bit tricky since my yard is very small - we're thinking that for the next crafternoon I need to set up a photobooth, with a background and all! ~____^ 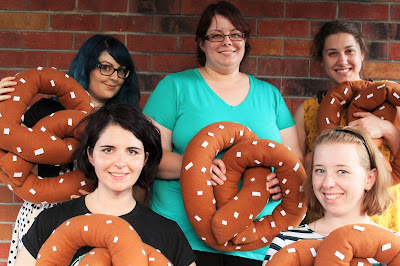 We've got a few more projects planned for our next couple of crafternoons, so it'll be fun to see how they come out!

Those are super cute! They turned out adorably!

Thanks heartsoph! They were really fun to make! ^___^