Hello! I am slowly becoming totally obsessed with pom-poms. I've seen a lot of really cool things made with them, and when I saw this adorable bunny by Martha Stewart I knew I had to give it a go! But, then I thought, yeah, bunnies are cute, but jacklopes are cute *and* mythical! ^__^ 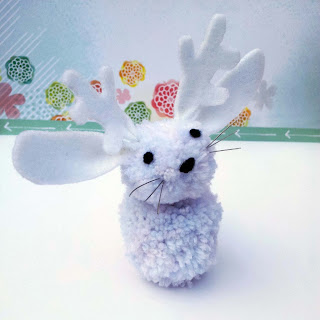 And here's how I made her ^__^ I have a pom-pom maker that does three sizes, so I made one of each and then cut them down so they were nice and dense. It makes a lot of tiny wool fluff that gets everywhere, but the pom-poms look great so it's totally worth it. 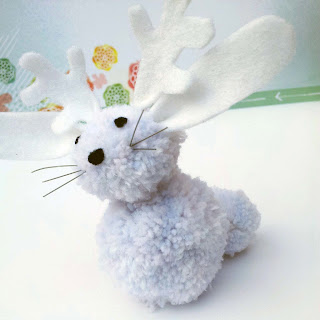 I cut out the eyes and nose from black felt, and the ears and antlers from white felt. I added a little bit of glue to the front bottom section of the ears and antlers before I attached them to the head so that I could pinch them in half and give them a bit more shape. Then I added a bit of glue to the bottom of the ears/ antlers, parted the wool on the head, and stuck them in. If you part the wool before you stick them in then the fluffiness of the pom-pom covers up the base of the ears/ antlers. The whiskers are made from tiger tail, which is a jewellery making wire. I dabbed a little bit of glue on the ends and then just poked them in place. 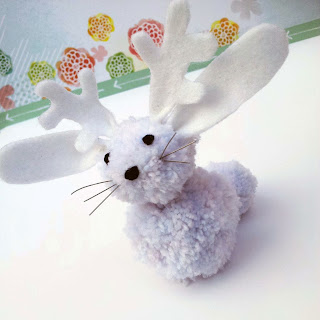 Then all that was left to do was glue the head, body, and tail together! ^__^ I used Amazing Goop for all my gluing needs, but hot glue would also work well ^__^ 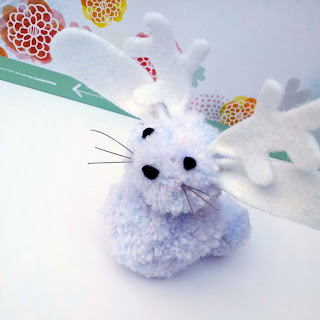 I used some of the baby wool I inherited from my Nana Tess to make Ingrid, and it turns out that baby wool is *perfect* for pom-poms because it's so fine so it makes a denser, more fluffy pom-pom. Also, it's really soft and the type I used has a really subtle variation in it so it changes between white, pastel purple, and pastel pink which makes your pom-poms look fancy without any additional effort on your part. Yay! ^__^

Anyway, I hope you like Ingrid, and are ready to see more pom-pom crafts in the future because I think this is going to be my new favourite base craft ... ^__^

Thanks Becca! I think she's pretty adorable too! ^__^