Hello! After finally managing to find these photos in my phone (I swear it hides things from me!) I thought I'd share with you what I picked up on the second annual op-shopping road trip that Rebecca and I did ^___^ 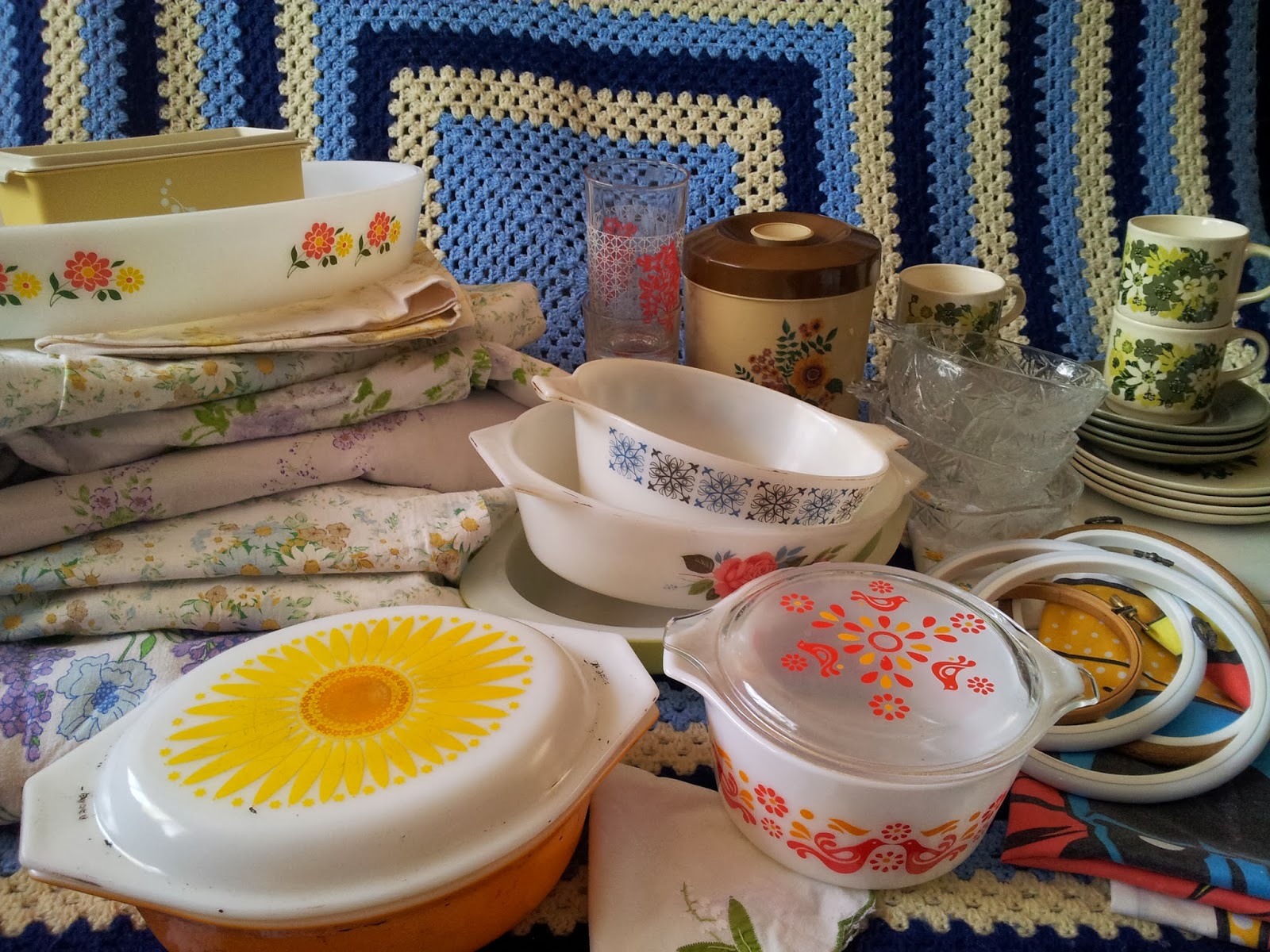 Here's an overview. Um, wow, right?  You've already been introduced to my new pyrex pieces, but I did find some other cool things as well! ^____^ In the top left hand corner you can see my newest tuperware piece. I love finding old tupperware! It's usually still got the seal intact, and it makes my pantry look so much neater ^____^ This one was only a couple of dollars - huzzah! ^____^ At the bottom is my one and only doily purchase this trip (I try not to buy too many of these as they really serve no practical purpose ... but they do look very pretty!); this one is hand embroidered with a lily-of-the-valley. I always find it hard to leave handmade things behind in op-shops, don't you? ^____^ 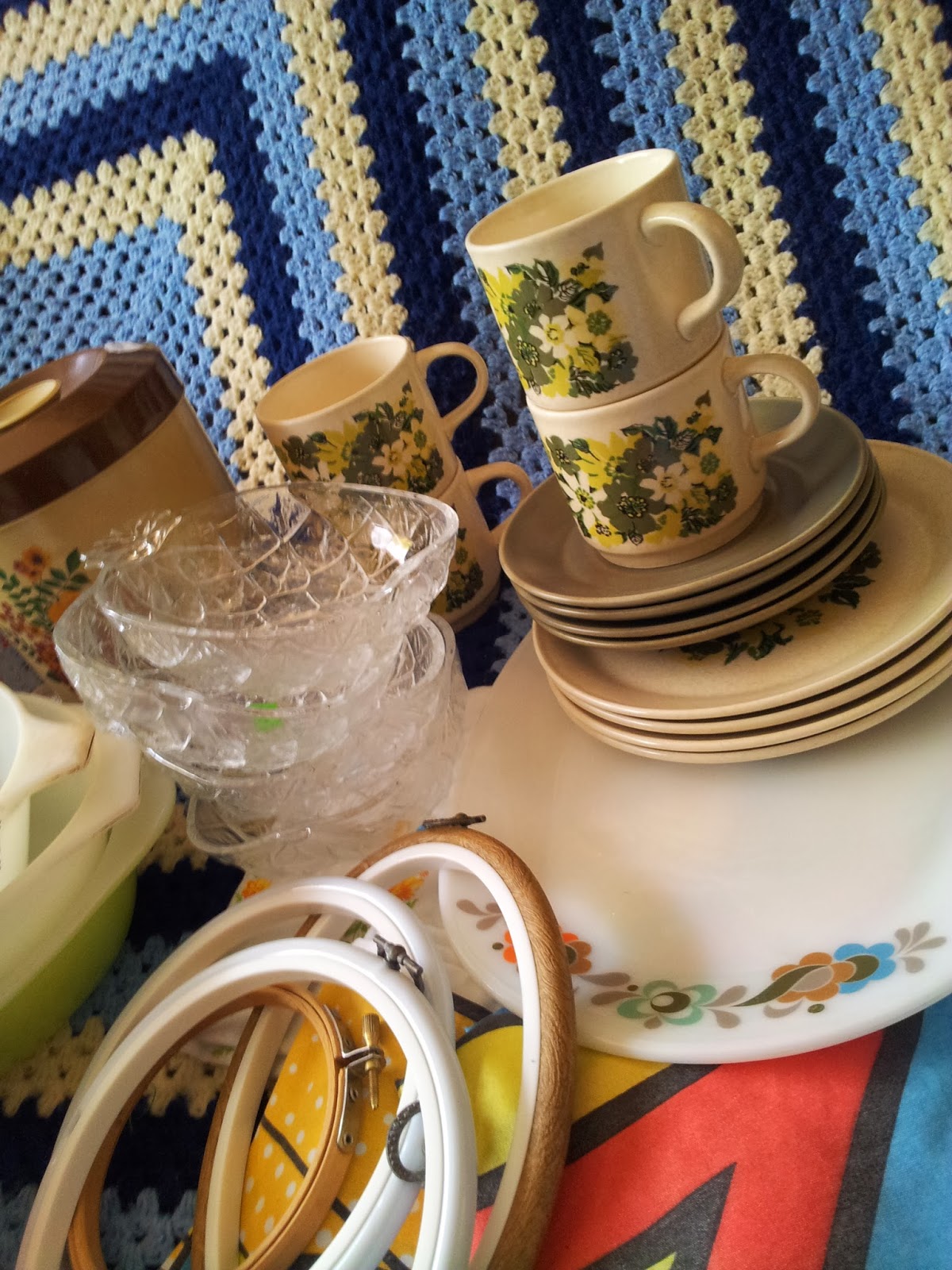 I got four new embroidery hoops, which is really excellent because since I've been doing hooplas I've been going through them like hotcakes! ^____^ I also picked up two DC comics pillowcases. I'm really hoping that I'll find superhero sheets one day because I really, really want to make a dress from them. Finger crossed! 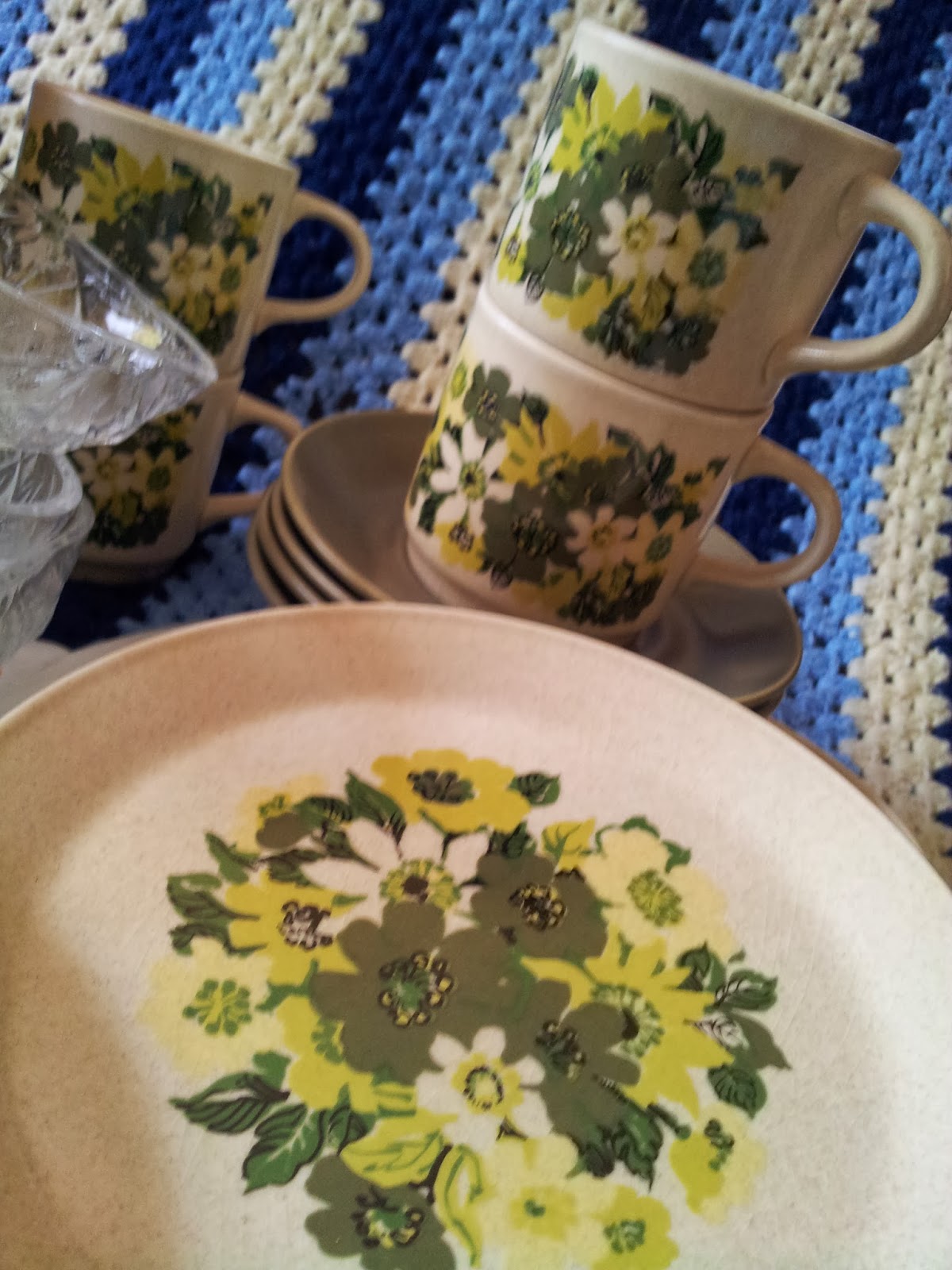 This set of Johnson teacups, saucers, and plates was only $2.50 so I really couldn't justify leaving them behind, even though they are not the type of china I normally buy. They're a bit more practical for everyday use than my fancy bone china teacups and saucers though and I've been using them quite a bit ^____^ 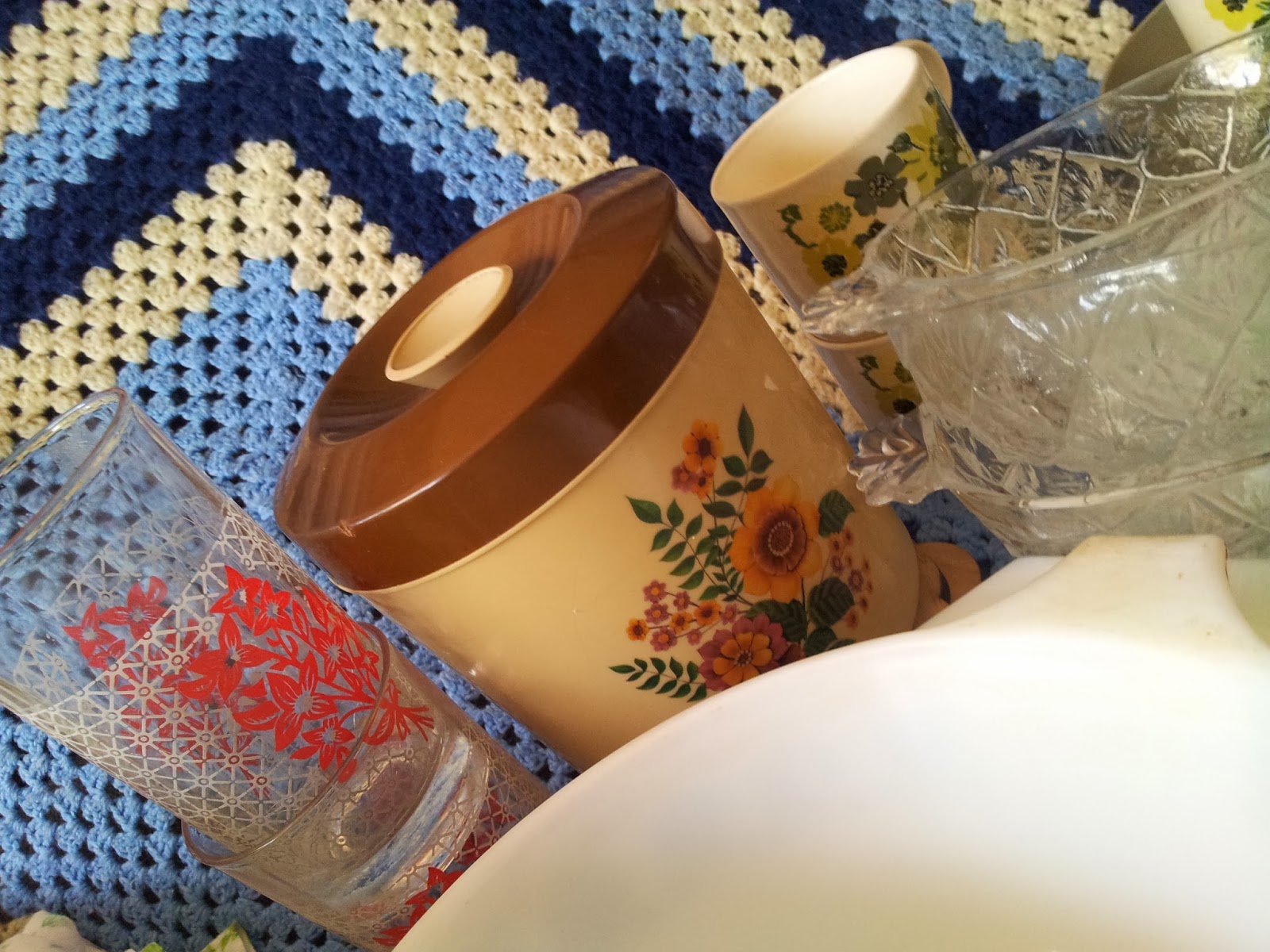 This cute canister has a crack that prevents it from being airtight, but it was 50c and I'm planning on using it for craft room storage. The two glasses are, hopefully, the start of a vintage glassware collection and were $1 for both. All my other glasses are super plain and boring, so it's nice to liven it up a bit! ^____^ Also in this picture you can see the additional four pineapple bowls that I got to match the seven piece collection that I brought previously. I'm going to need to have a dinner party and insist on a pineapple dessert, I think! ^____^ 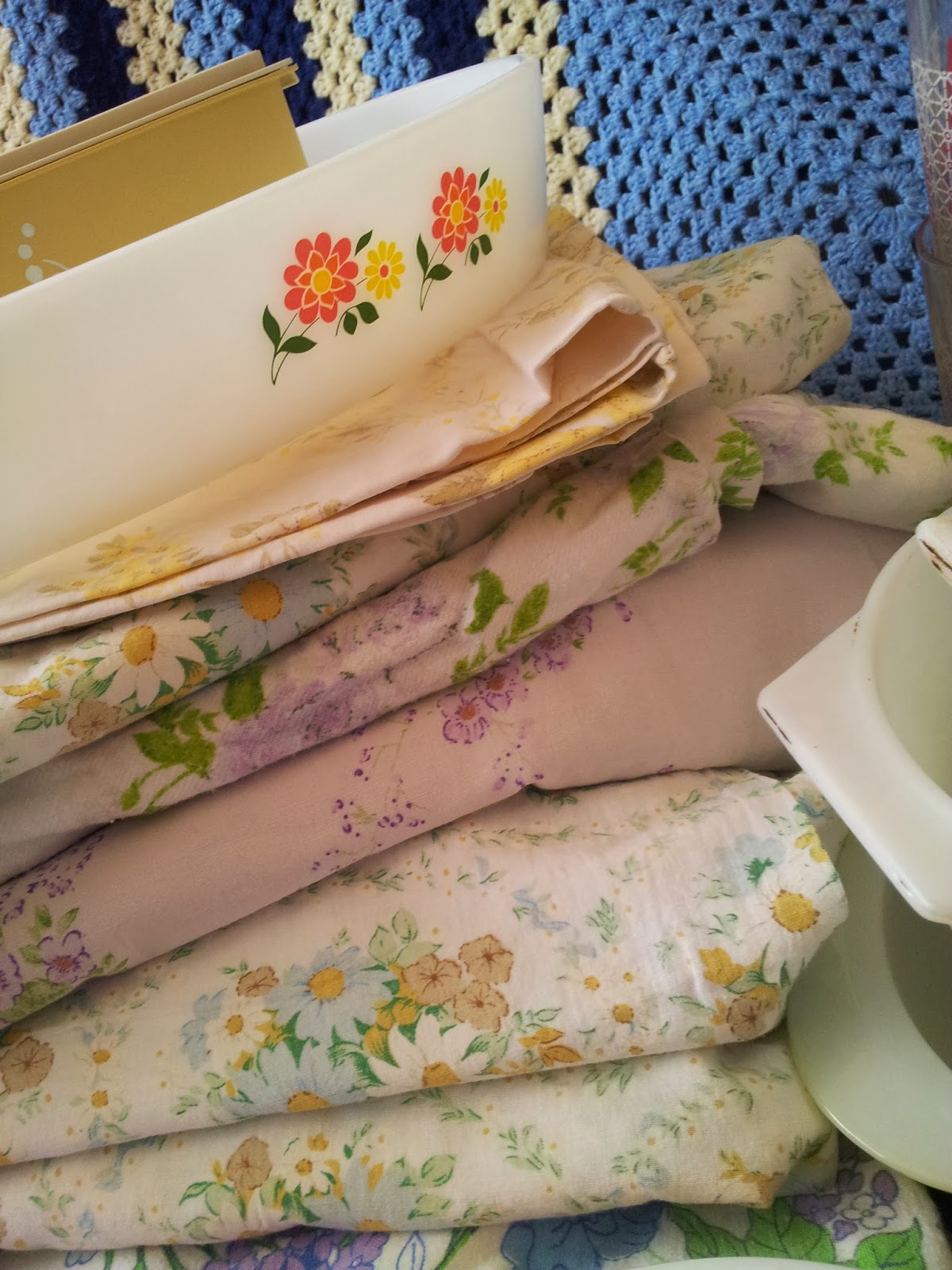 I really hit the vintage sheet motherload on this trip and ended up with six sheets and three pillowcases. Once I get past my fear of actually cutting into them, I plan on making some pretty dresses from these ^____^

Gosh, going through these pictures has made me want to go thrifting again very soon! Do you have a favourite thing to get second-hand?

Email ThisBlogThis!Share to TwitterShare to FacebookShare to Pinterest
Labels: geek, op-shopping, pyrex, so much pyrex, vintage

love those teacups, i have similar ones by staffordshire. simlar shape but orange flowers.

I would totes buy more but space is at a premium. Would love more pyrex!

Oh, they sound lovely! Space is getting a bit tight around here too - I need to curb my collections before I end up a hoarder! ~____^