Sigh! Another Halloween has come and gone ... next year, when I'm not at uni, I plan to dedicate a lot more time to decorating and crafting and costume creation and just general Halloween shenanigans! However, I did still have a lovely Halloween, and I succeeded in making myself a costume so, without further ado, may I present ... 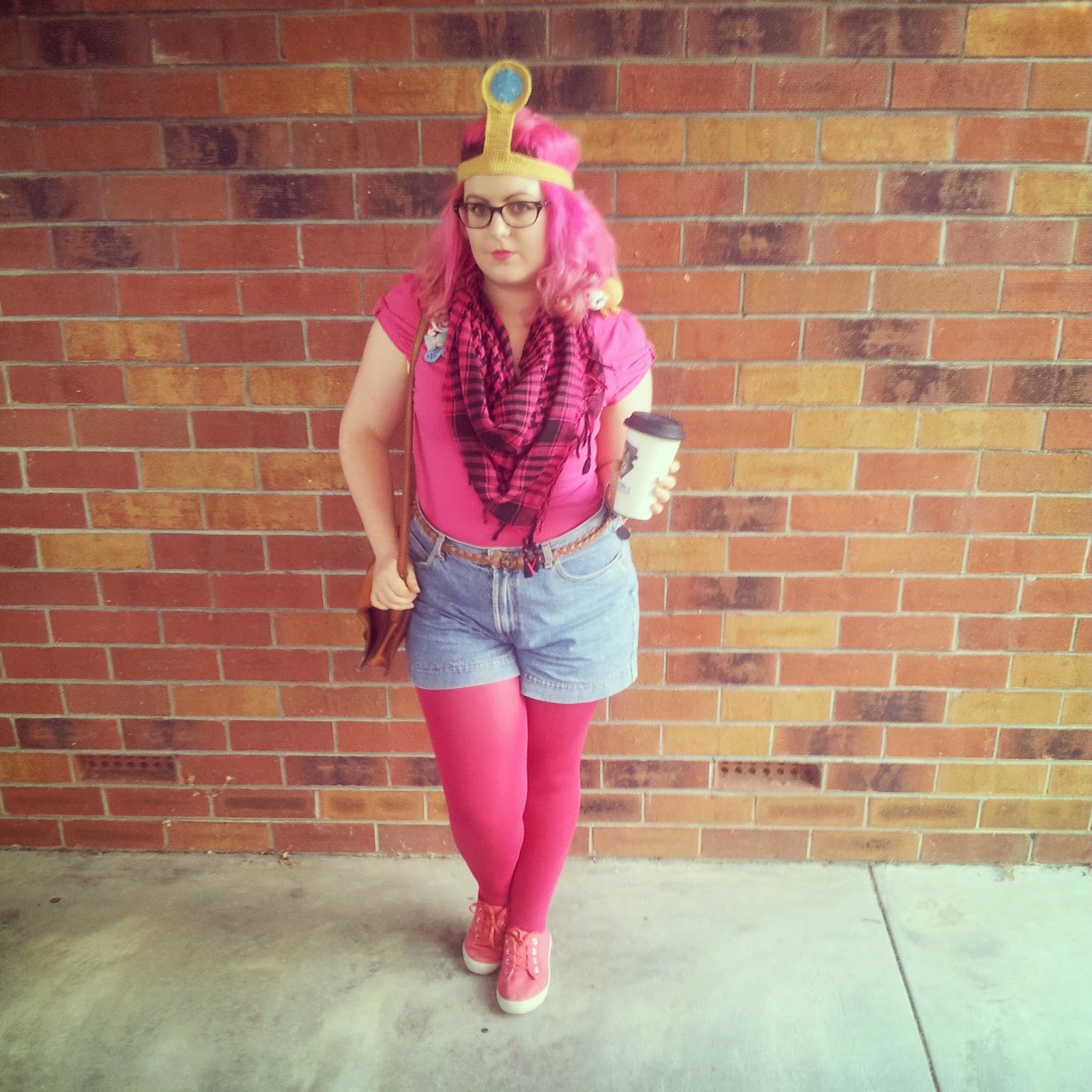 The hipster Princess Bubblegum! ^___^ Do people even do hipster versions of things anymore? This is how out of the loop I am. However, I have big, thick rimmed glasses and I didn't want to wear my contacts so this is the costume I went with! ^___^ 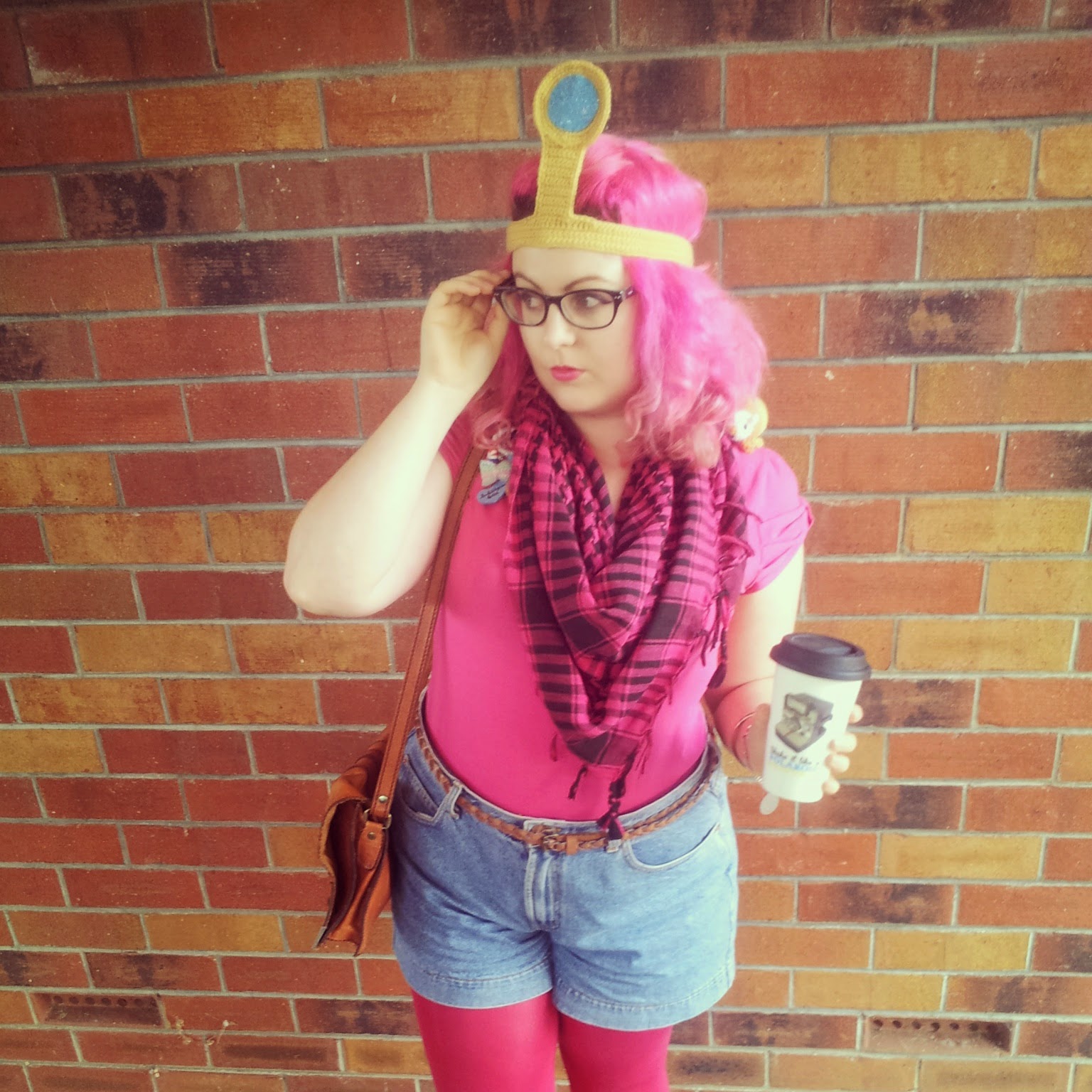 The scarf, shorts, and shoes were thrifted (Bec actually found the shoes for me, so a shoutout to her! ^___^), and I already had the belt, top, tights, coffee cup, and bag so this was a fairly easy and inexpensive costume to put together. 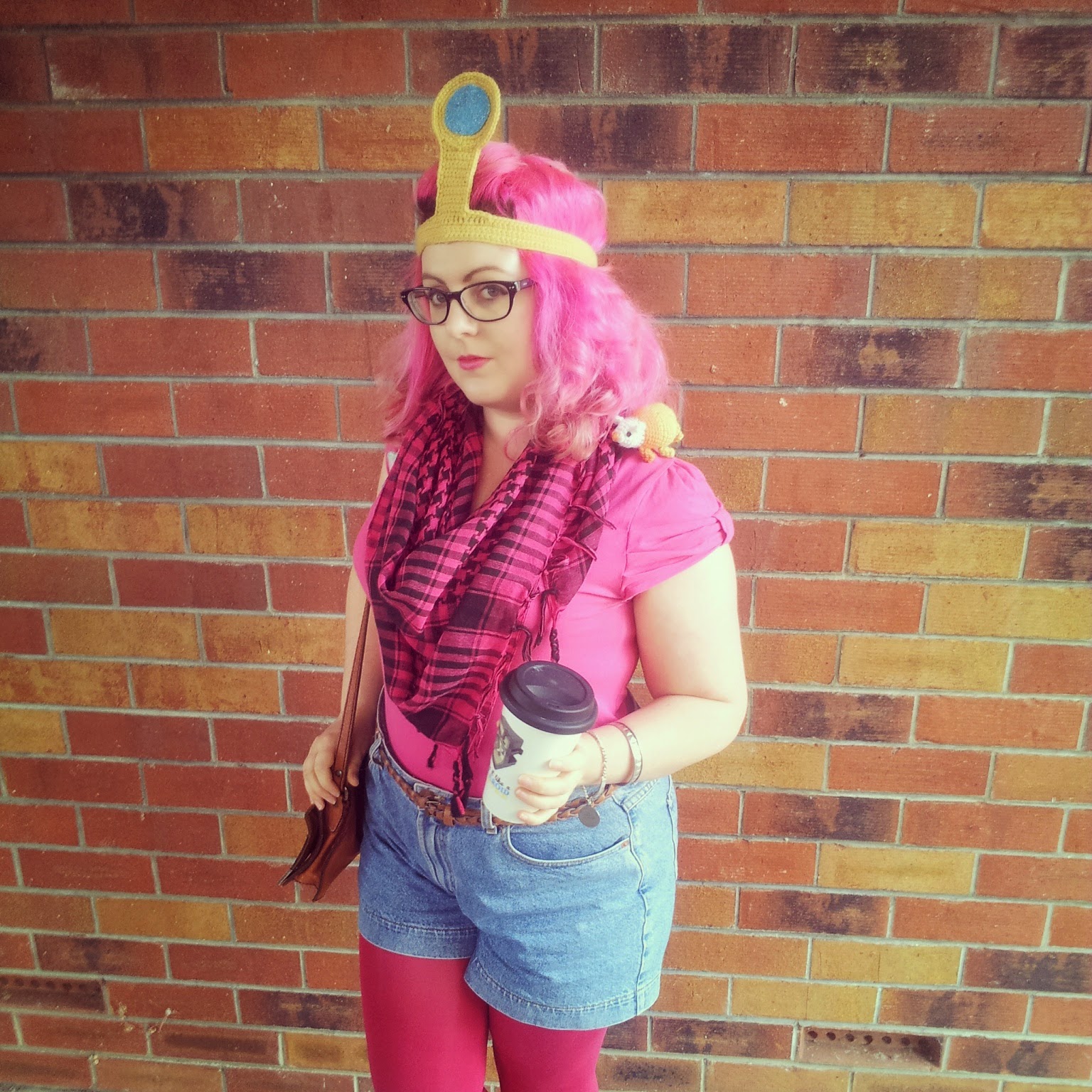 After I made my crown, I guess I could have called it quits, but what is a hipster without some jewellery? (I actually don't even know. Do hipsters wear jewellery? I've heard they like triangles, do they wear triangles as jewellery?) 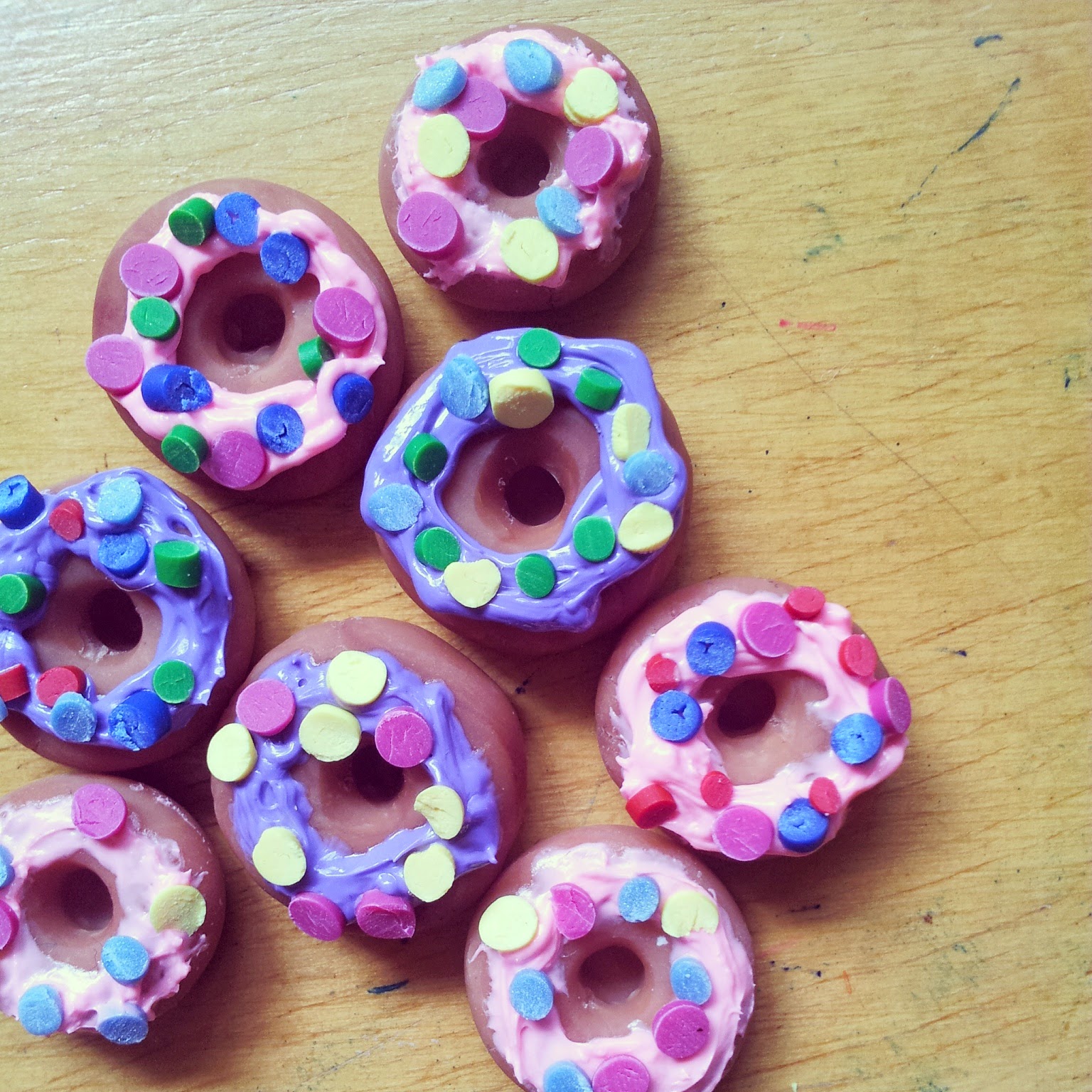 I watched this fantastic tutorial video by Nerd Burger and decided that I simply *must* have some donut jewellery. I'm not really sure if there are any donut people in Candy Kingdom, but I just couldn't resist. 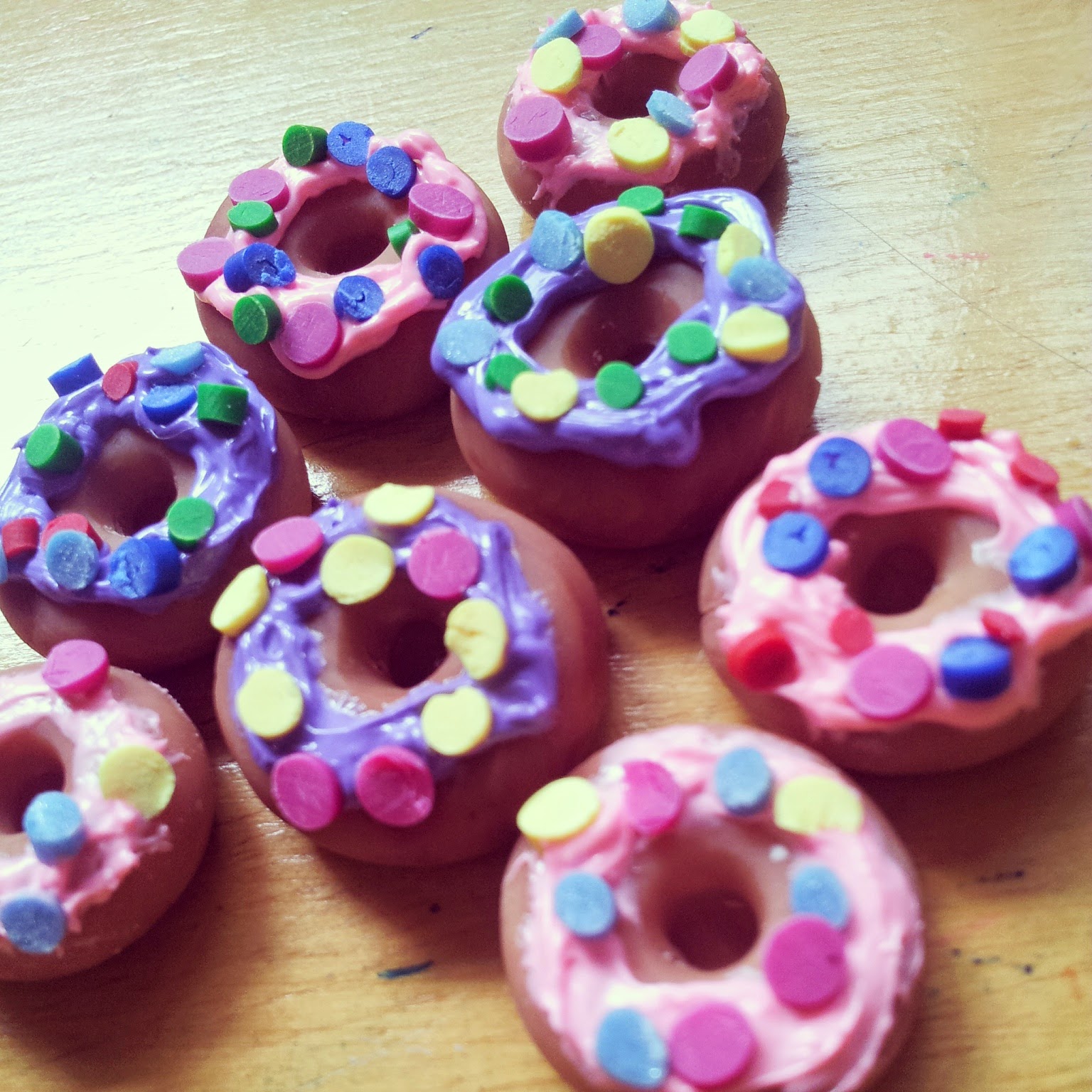 They were really easy to make; make sure you check out the video as Cazz explains the process wonderfully. I already had some Super Sculpey in the beige colour that I used for the dough, and I picked up some pink and purple puff paints and blue and yellow sculpey from the craft store for the icing and sprinkles (I already had the sculpey in the other colours). 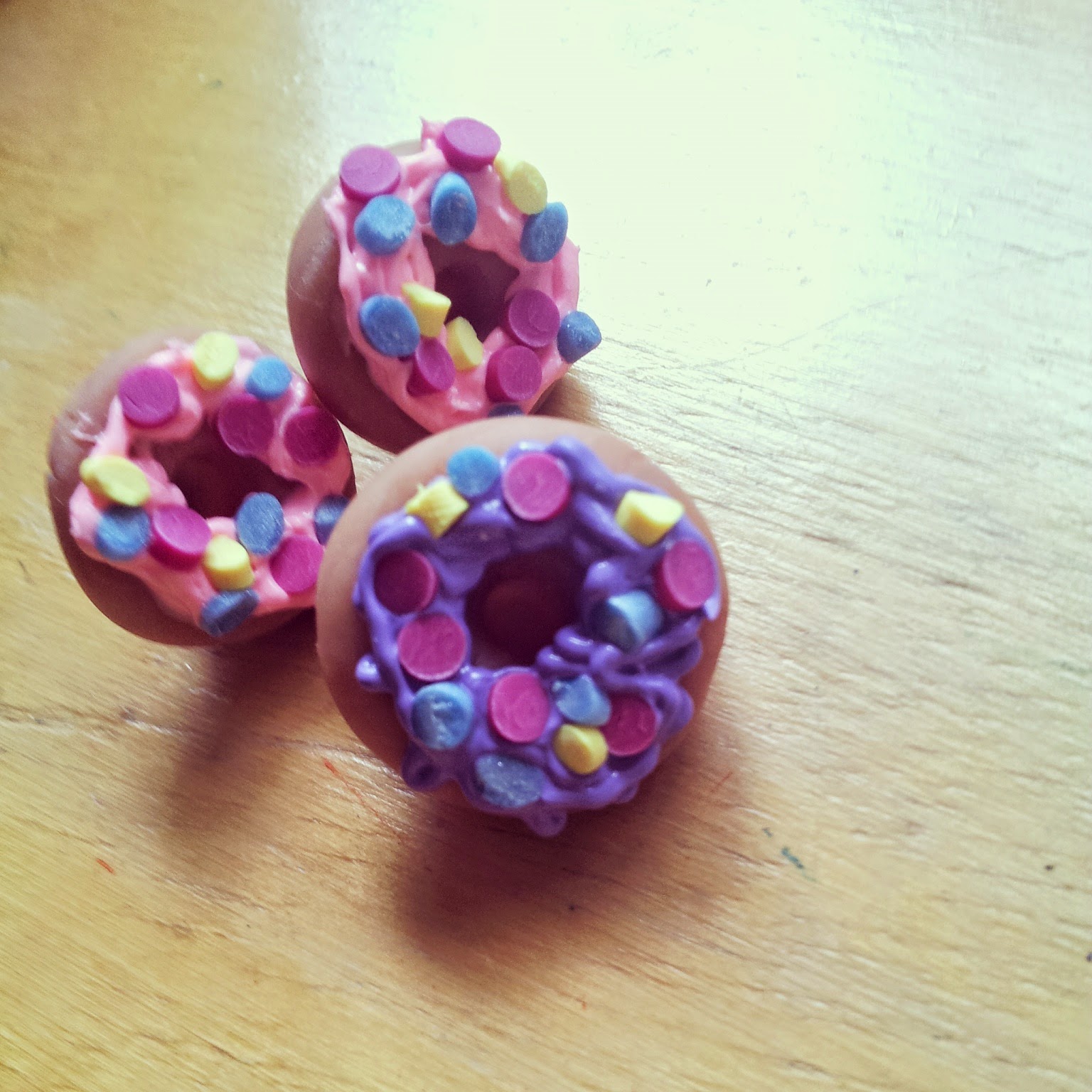 I made one purple donut into a brooch, and two smaller pink donuts into earrings, just by gluing the pin/earring backs on with E6000. 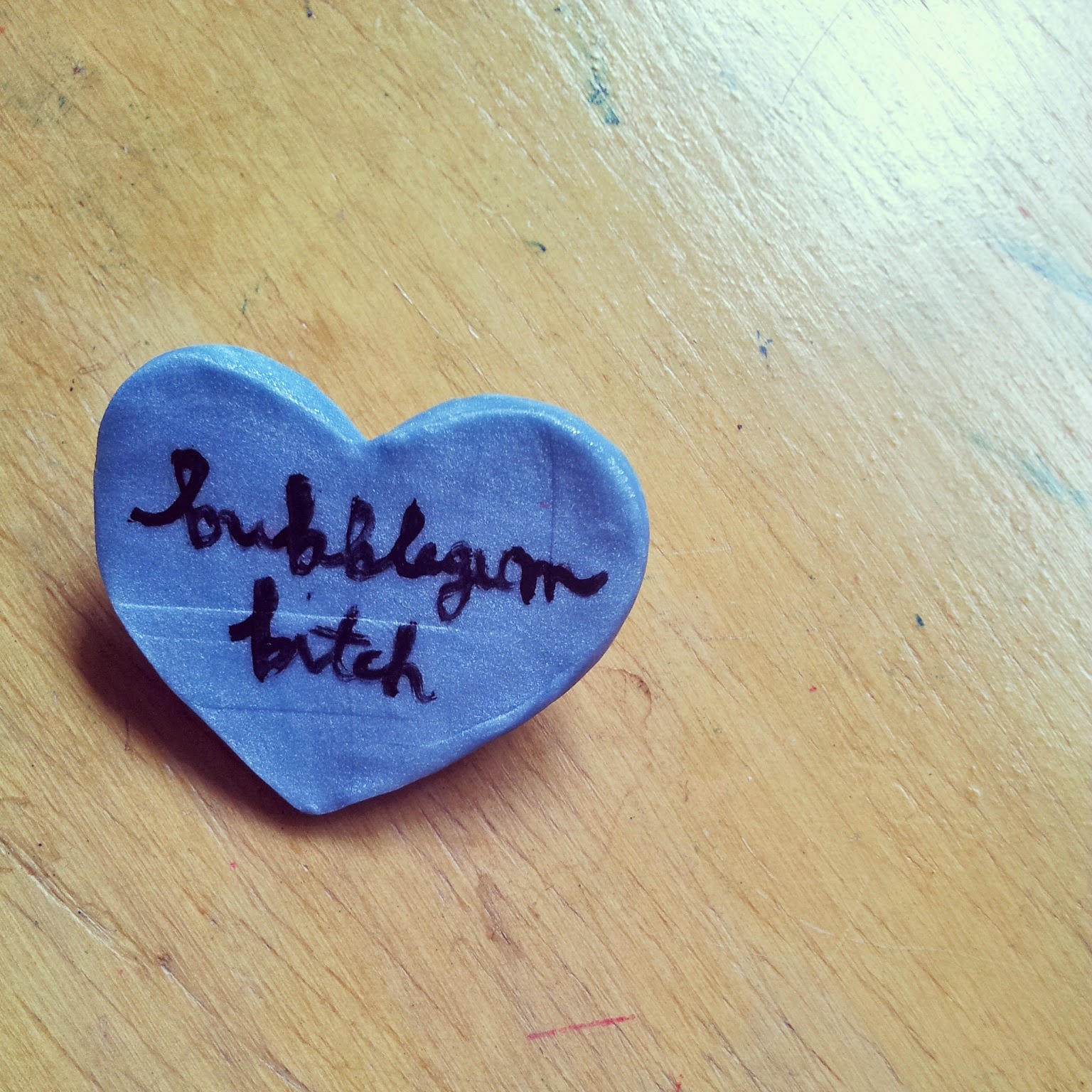 I also made this brooch using some of the light blue shimmery clay; mostly because I had this song in my head the entire time I was crafting things for this costume. 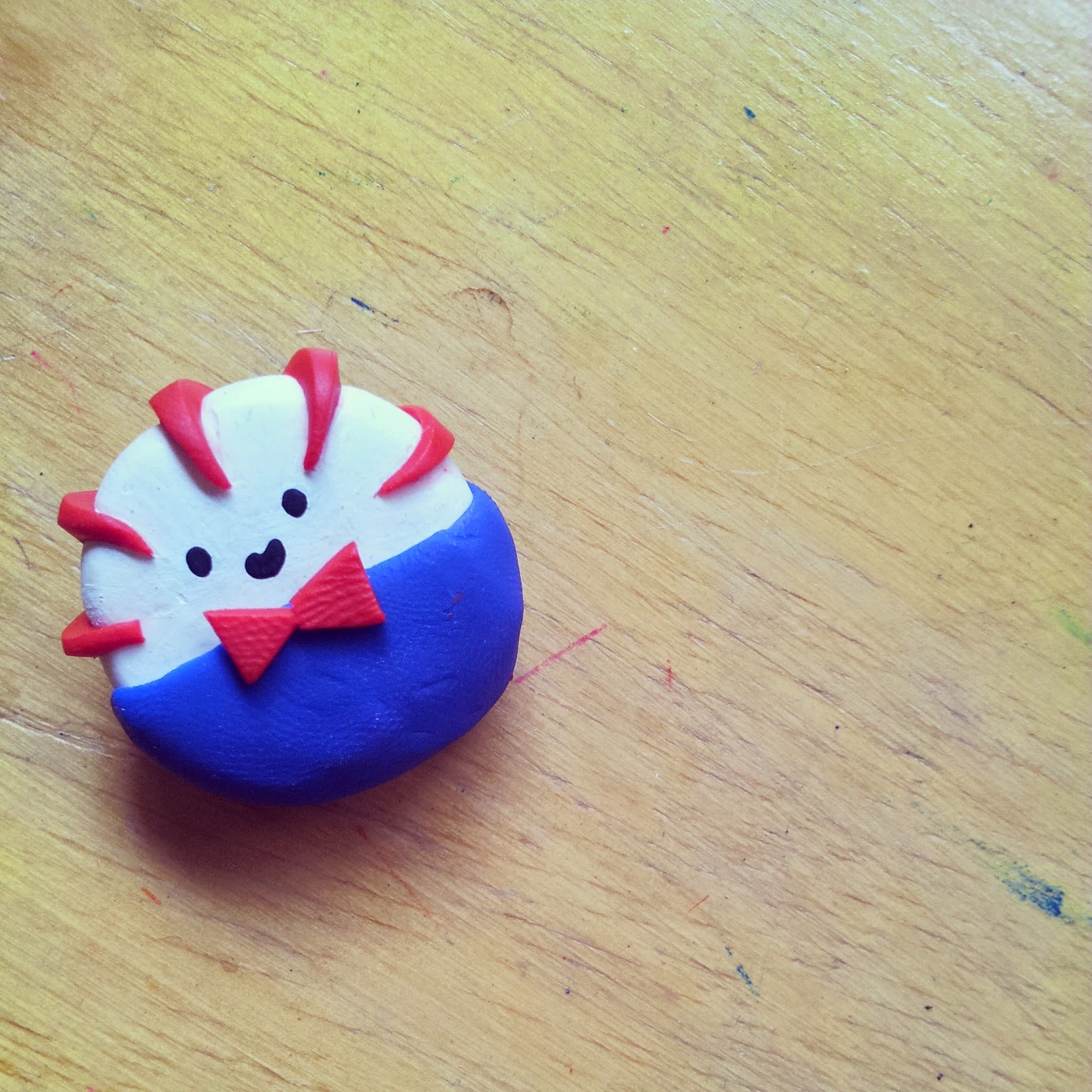 I also had a go at making a little Peppermint Butler brooch; it's not perfect (I need to work on making sure I don't leave nail marks on everything and I think his head stripes are too raised ...) but I think it's pretty cute anyway. 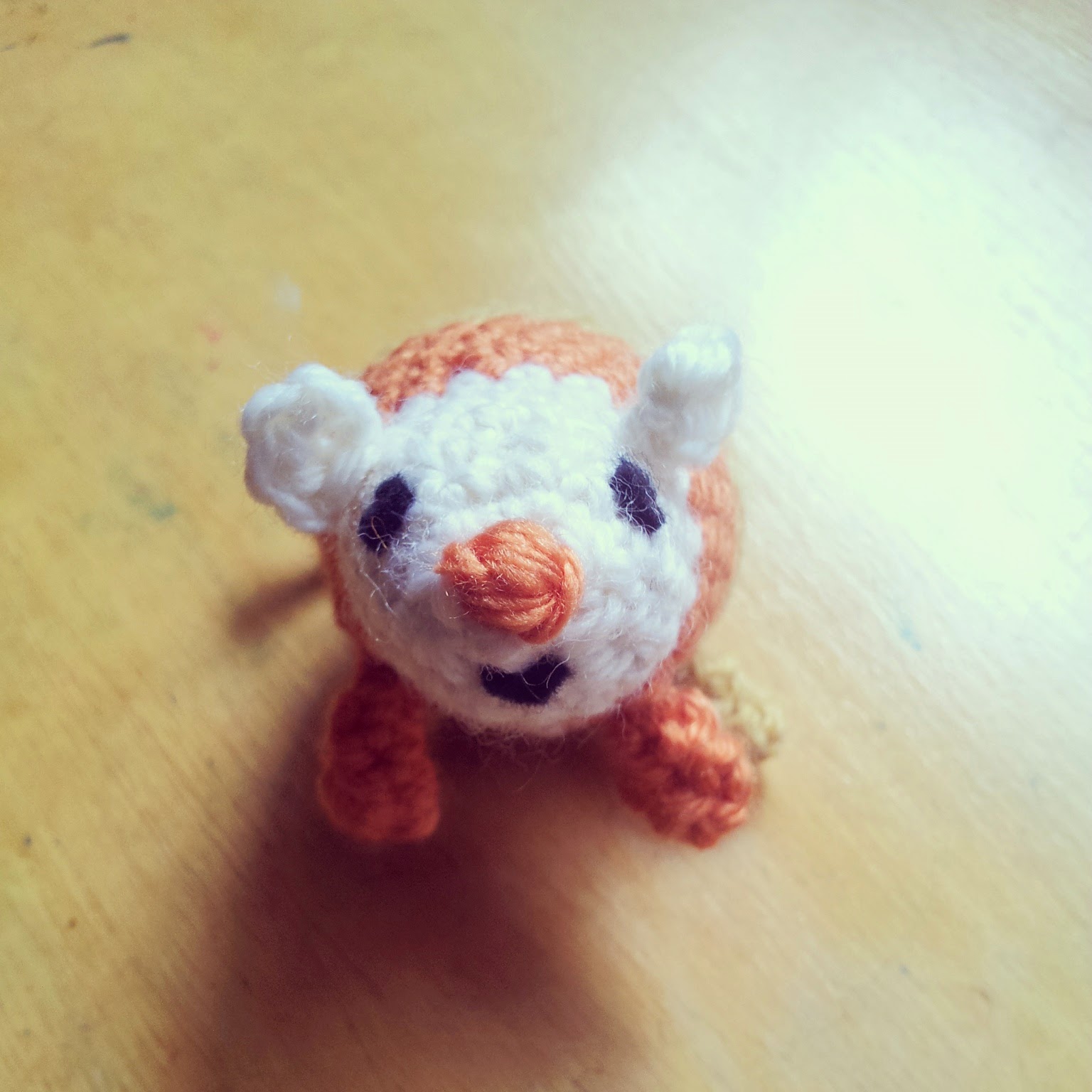 And, speaking of cute, you may have noticed that in the pictures above I have a little friend riding on my shoulder - Science the Candy Corn Rat! Yay! Pops de Milk made an adorable Science, and even shared the pattern for her so I knew I had to make one too ^___^ 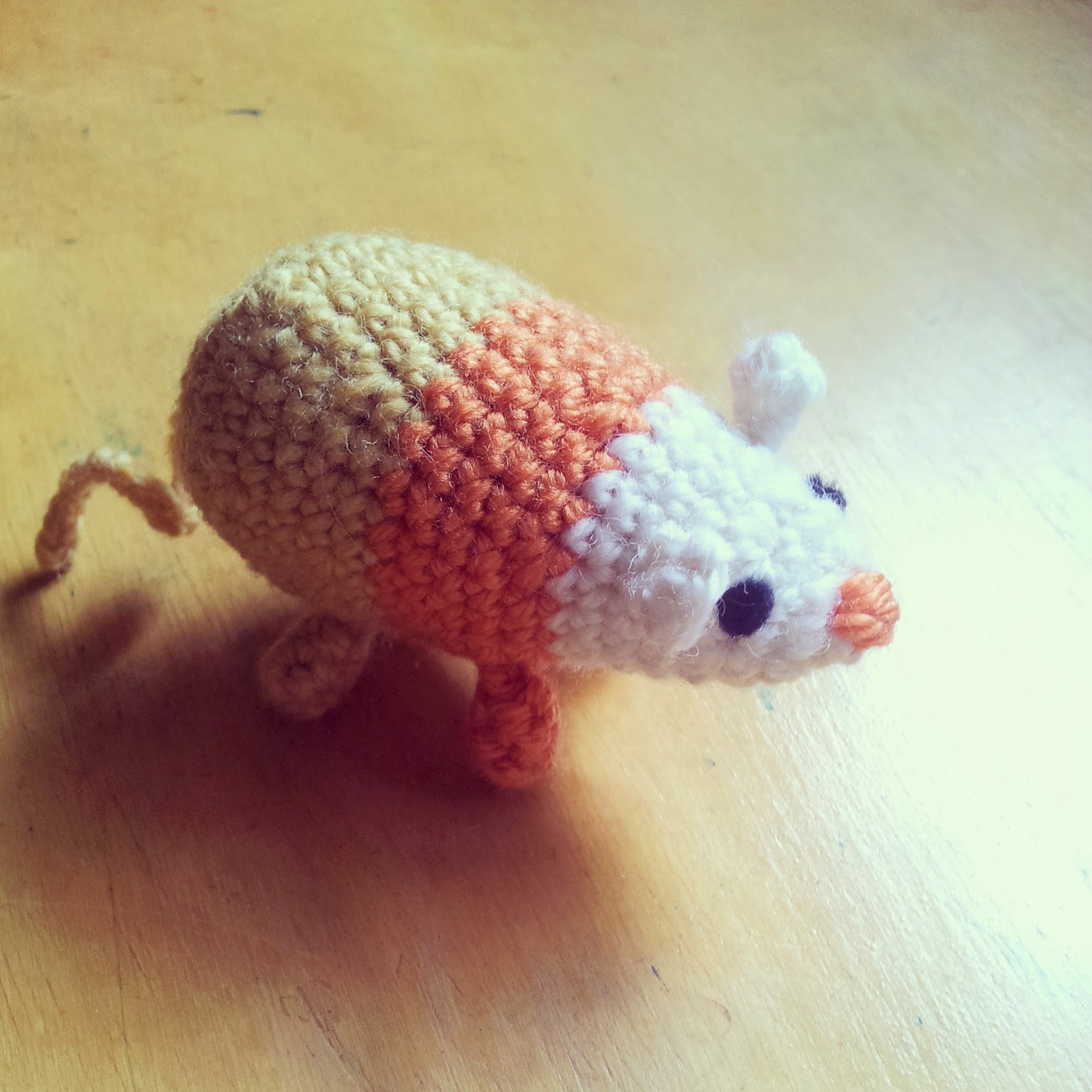 Patricia's pattern was lovely to follow; very simple to understand with with lots of pictures! (I always like to have photos to refer to so I can tell if I'm on the right track with a pattern!) 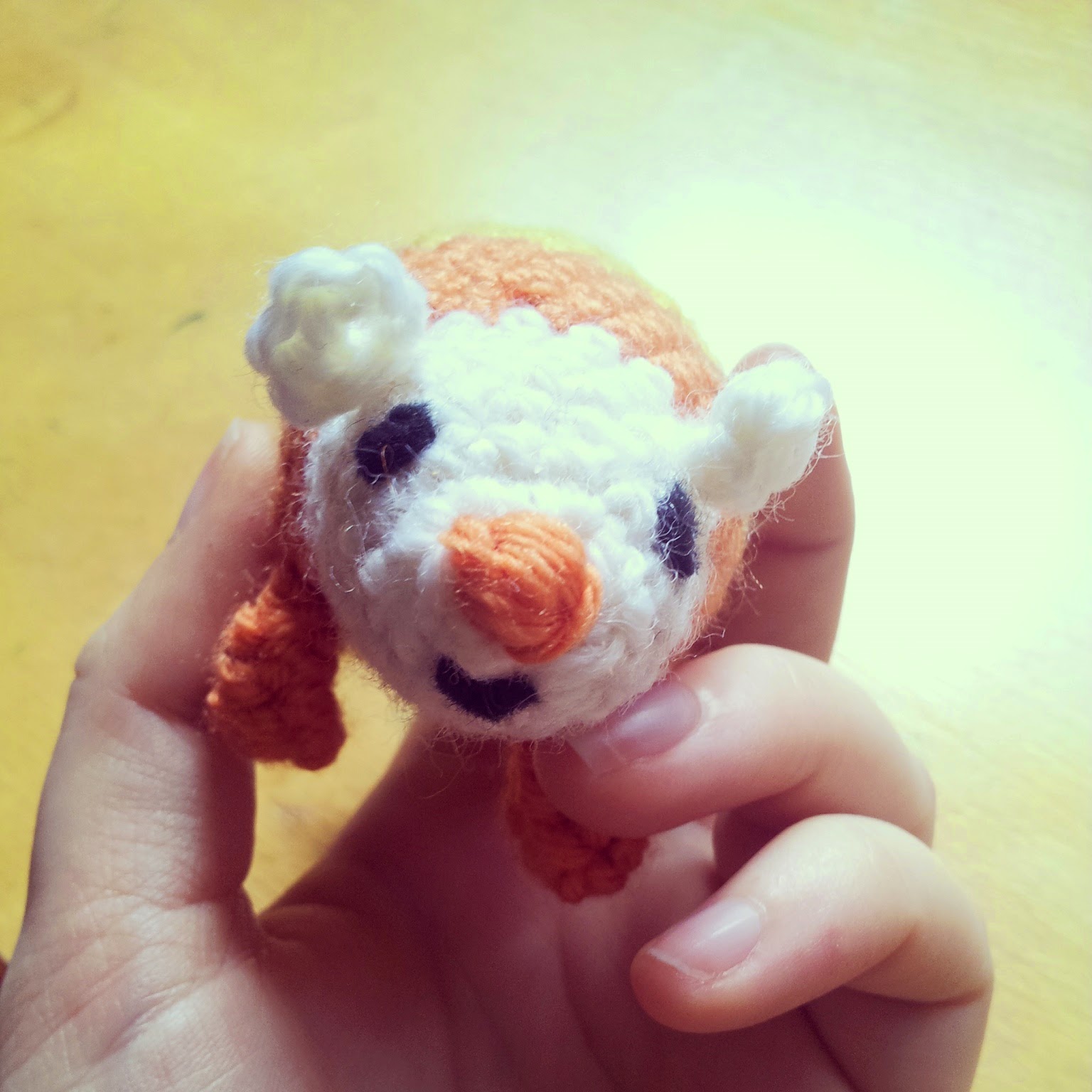 I did my Science's face differently in that I sewed on small felt shapes instead of using safety eyes and embroidery for the eyes and mouth respectively. I did actually have some 7mm safety eyes that I was going to use but when I put them in they just didn't look right. I didn't have any smaller ones, and I was too lazy to go back to the craft store, so I used felt instead! ^___^ 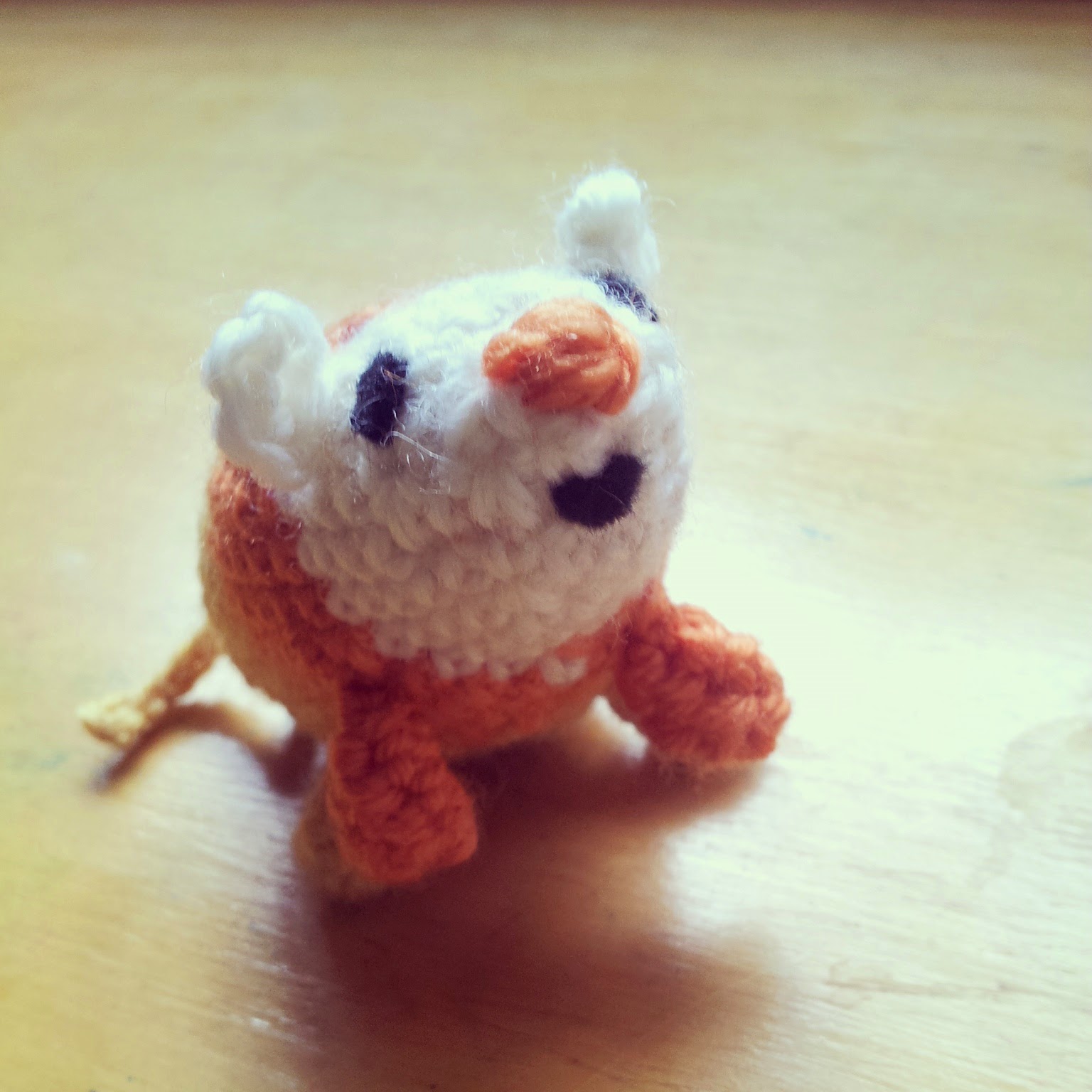 One thing I must get better at doing is making the legs for amigurumi - mine always come out slightly bigger at the base than at the top and I think they are meant to be the same the whole way through. Practise makes perfect, I guess! 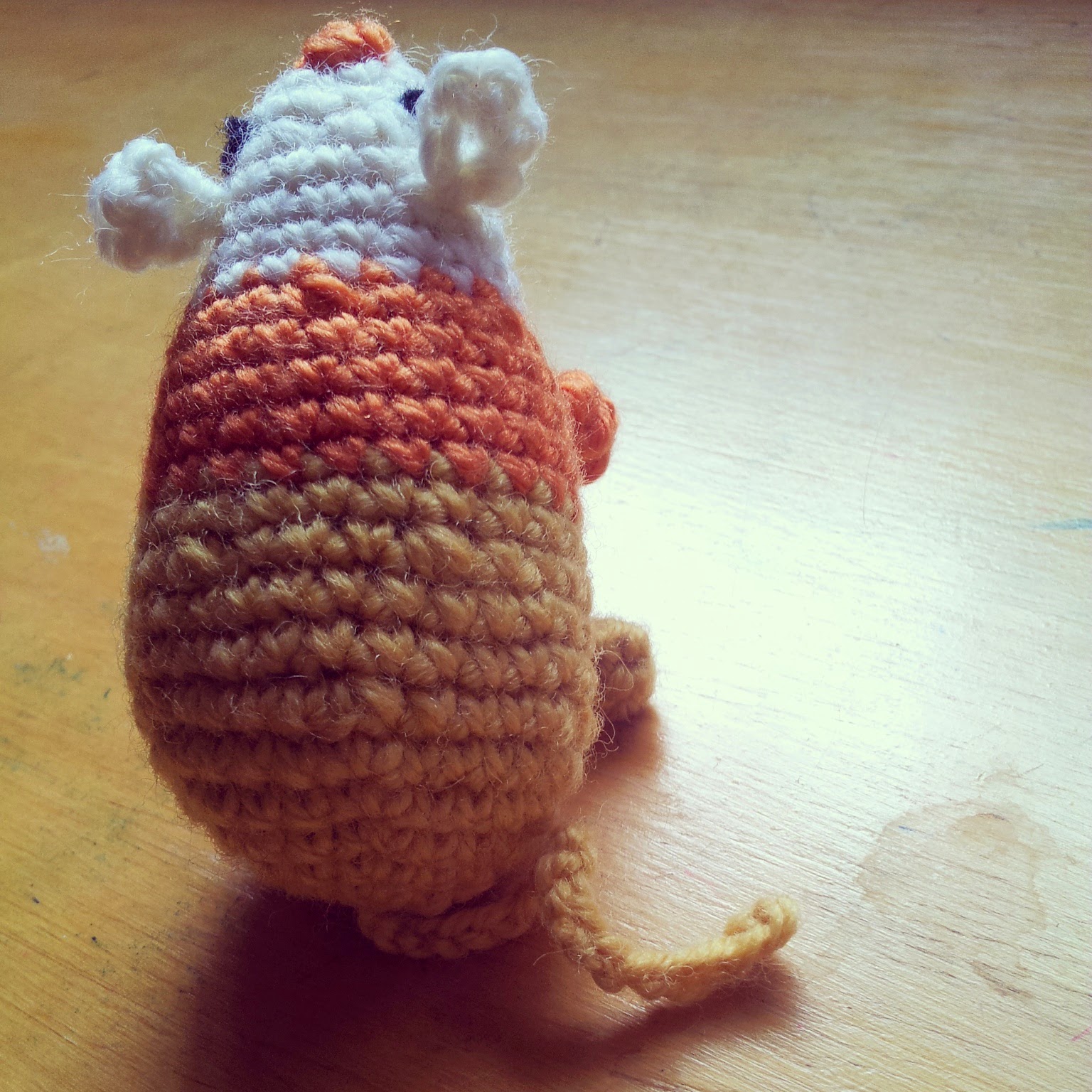 My Science also has more of a curly tail; this is probably because I crochet too tight. However, it may loose its curl in time so I'm not too concerned about it. 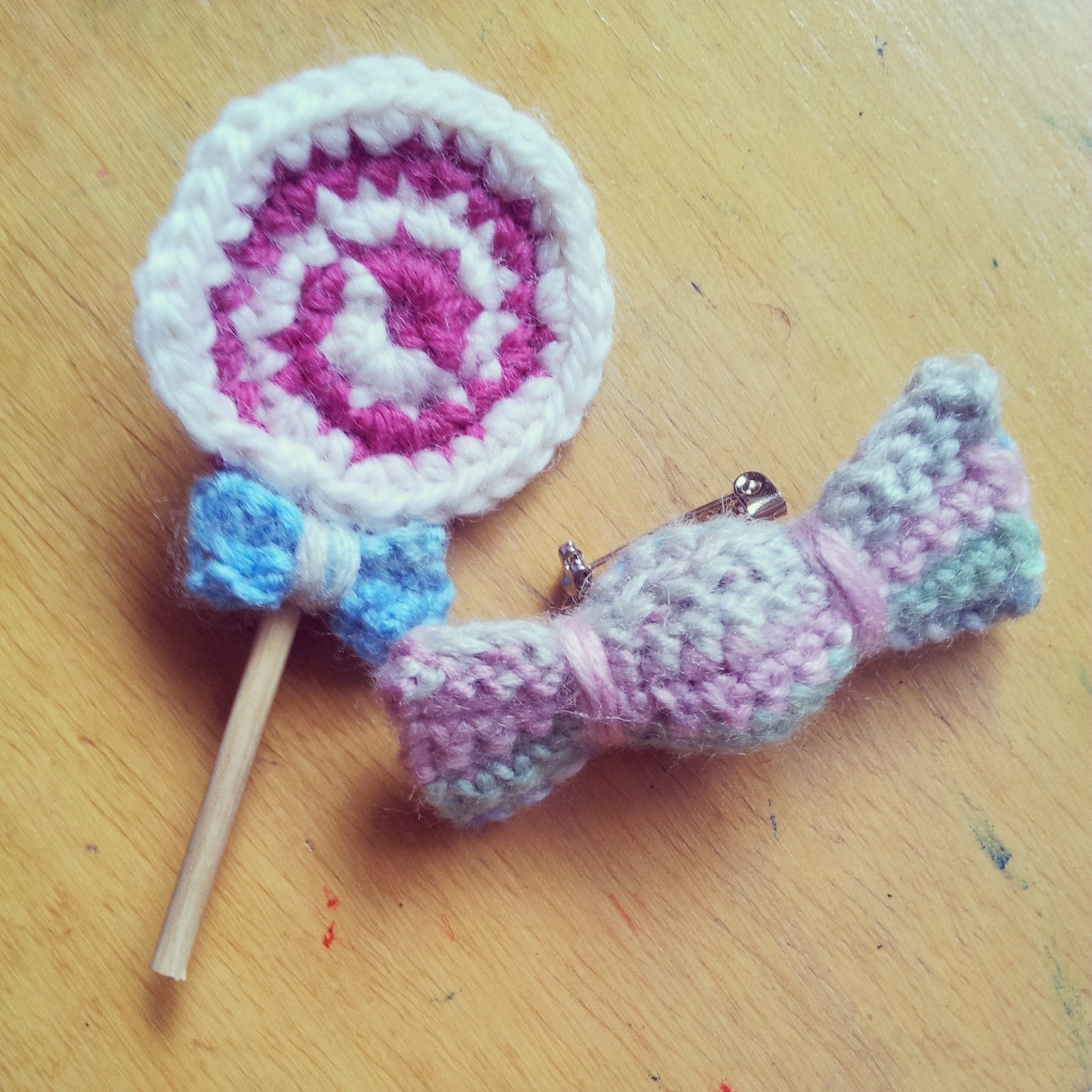 I also crocheted two more brooches (one can never have too many brooches, right? ~___^). For the lollipop I used a pattern by Twinkie Chan, but used part of a wooden skewer instead of crocheting a stick. For the sweet, I crocheted a rectangle, sewed it into a tube, put a scrunched up bit of paper in the middle, and then tied yarn around each side of a ball. Then I just glued brooch backings onto both of them ^___^ 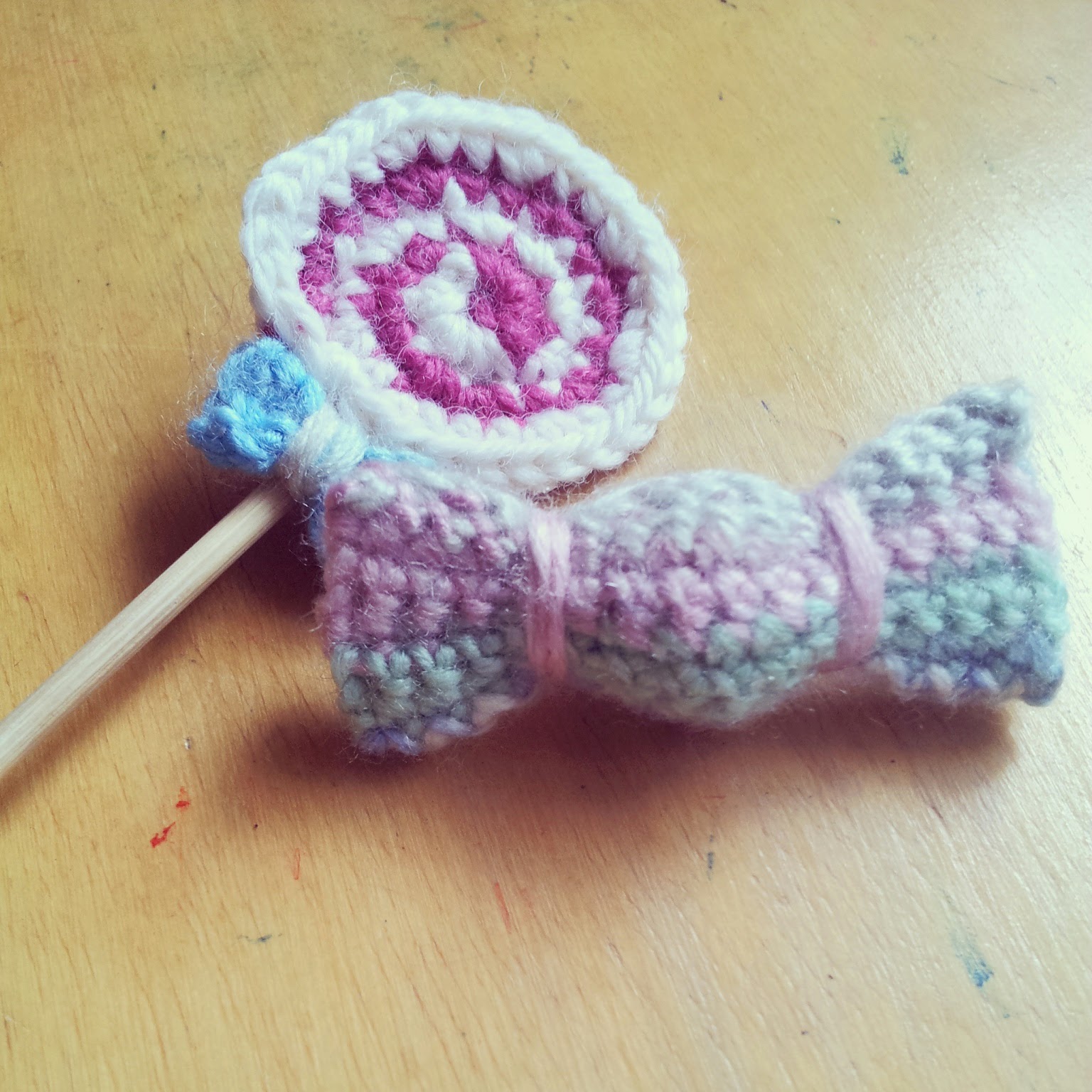 As always, there is so much more things I could have crafted for this costume (Peppermint Butler handbag, Lady Rainicorn bracelet, science glassware charm bracelet ...) but I think I did pretty well considering I was also finishing off an assignment ~___^ 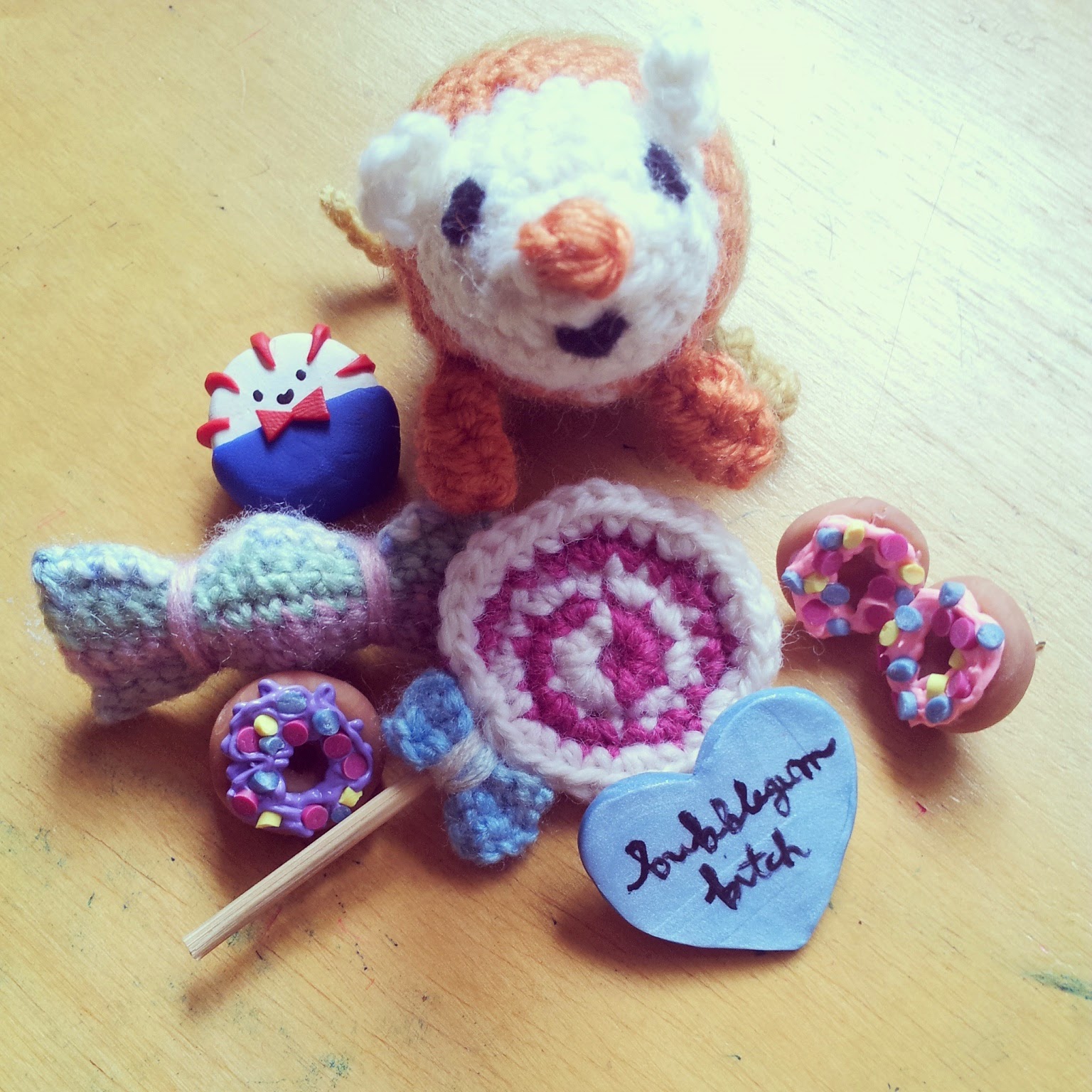 The zombie project I was planning has pretty much completely fallen through at this stage so I'm not sure if that will be appearing on here anytime soon, which is a pity since I still think it's a cool idea! I might keep working on it. I've still got eight tiny donuts to make into something though (plus three major essays, blah!) so I've got enough to keep me busy. I'm thinking maybe a bracelet? Or magnets? Or more hair bows? Hmmm.

I absolutely love everything in and about this post! Thank you so much for sharing Science the rat - yours looks amazing! And the brooches and the costume - so awesome :D

Thank *you* Patricia! Your Science the Rat was so cute, and the pattern is just awesome ^___^

Thanks Kim! I used to be kinda good at sculpting in high school so I really want to keep practising so I can regain some of those lost skills! Definitely give Science a go too, they are a wonderful friend to have around the house/lab ^___^

This post is bursting with cuteness haha. I love it! The crown is adorable! <3

Thanks for stopping by my blog and leaving such a sweet comment for me, too! I appreciated it! :D

I absolutely love your costume! It is perfect. :)

Love everything about your costume!!!

I've just found your blog and I think it's really inspiring, it will be an honor for me if you can visit mine too, and if you want to follow, it will be a pleasure to follow you back! :) <3