Hello! Do you watch Game of Thrones? I must admit I'm terribly behind (I think I kinda stopped watching in the middle of Season Two ...) but Pip recently invited me to her GoT premiere night and I simply couldn't resist attending! I have read all the books currently out, so I figured I wouldn't be totally lost. Now, don't worry, I won't share any spoilers! But Pip mentioned that we should dress in House colours and, you know me, I'm always up for a costume! 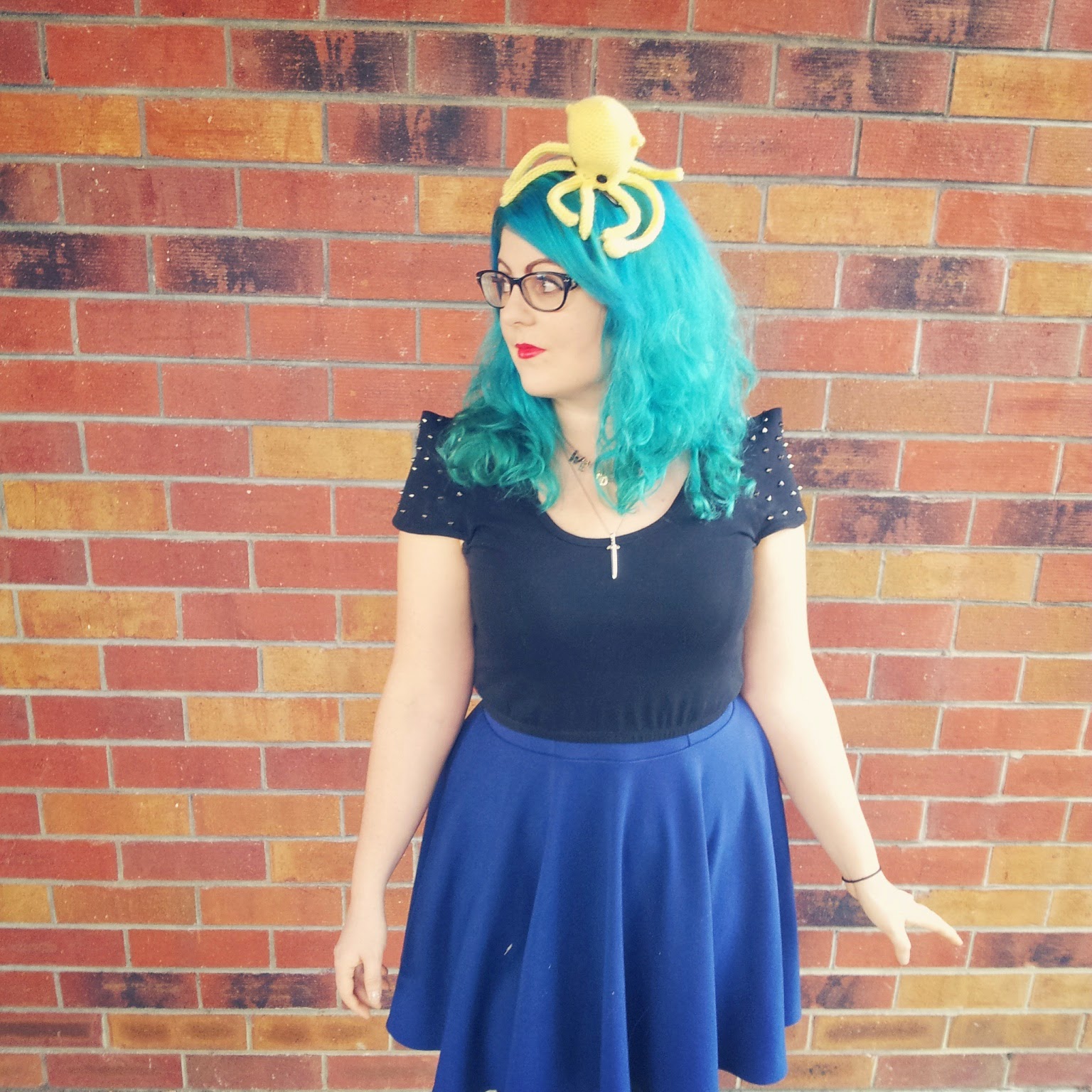 I decided to play subtle tribute to House Greyjoy. Well, subtle apart from the kraken on my head! 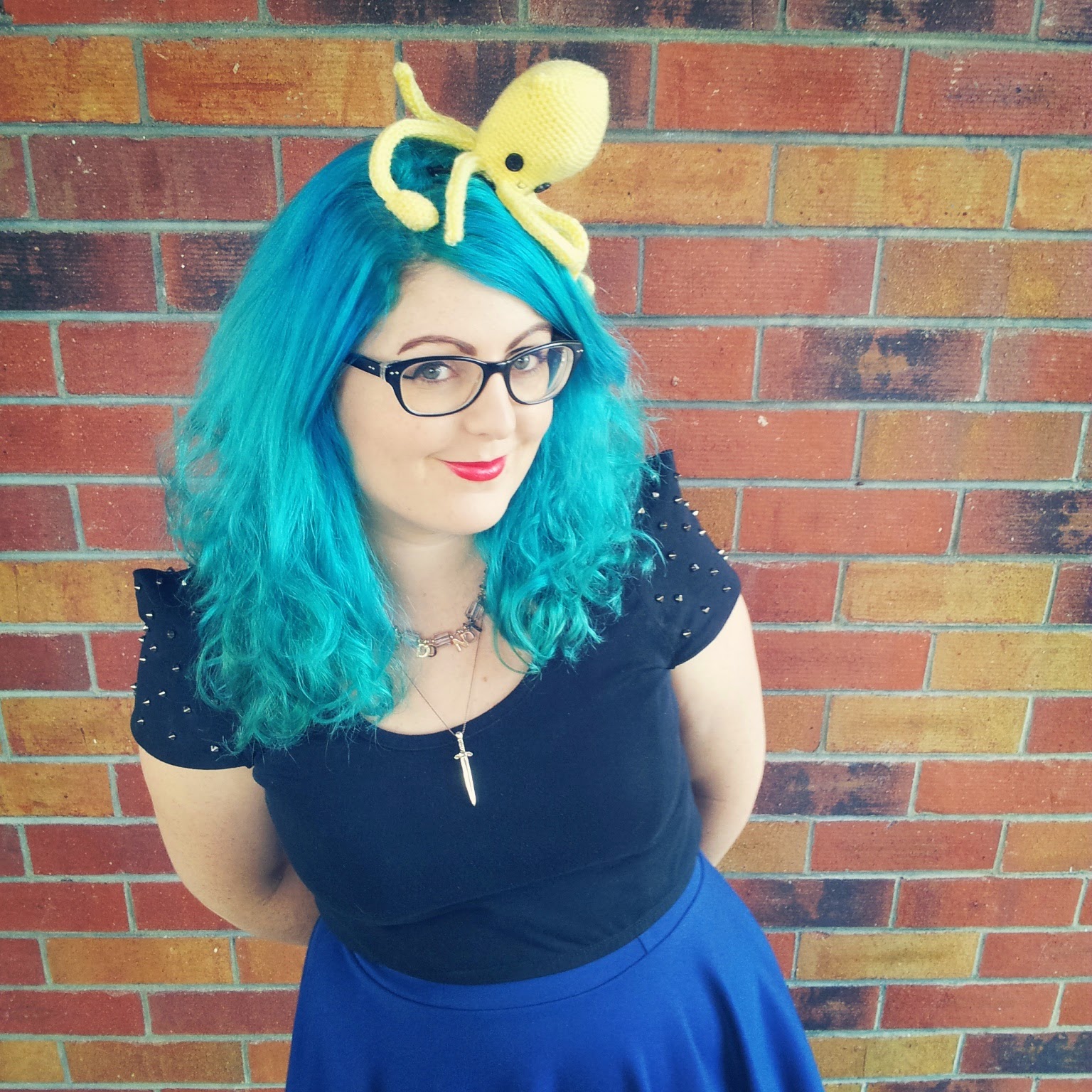 House Greyjoy rules over the Iron Islands, and their coat of arms features a gold kraken so I figured my blue hair would be a nice stand in for the ocean, and a little kraken would be a lovely fascinator! 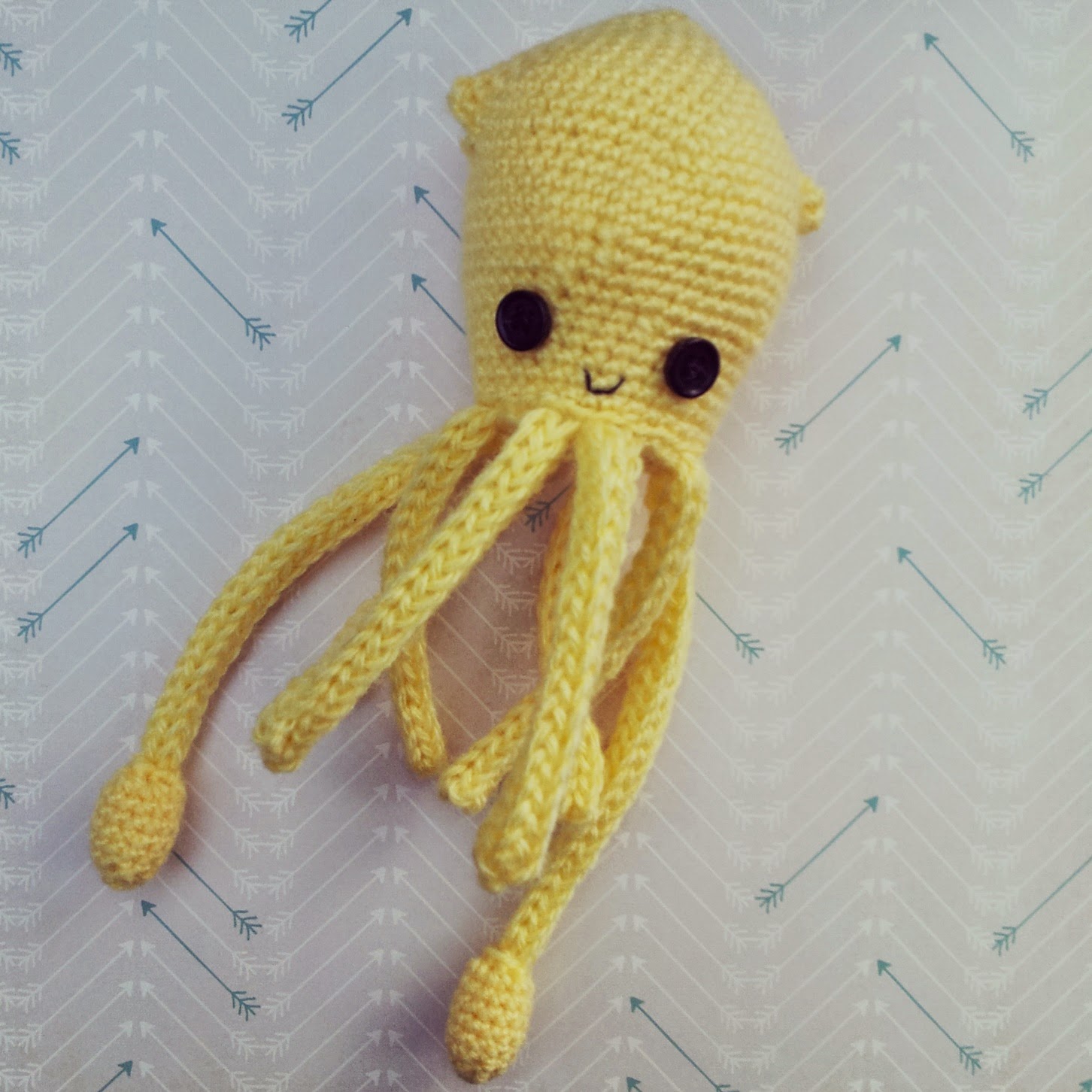 I used a pattern by Mr Fox, which I had actually made up once before. In 2011 I made a squid for my friend Molly using this pattern, and have been planning to make myself one someday since then. Well, it only took me four years! ~____^ 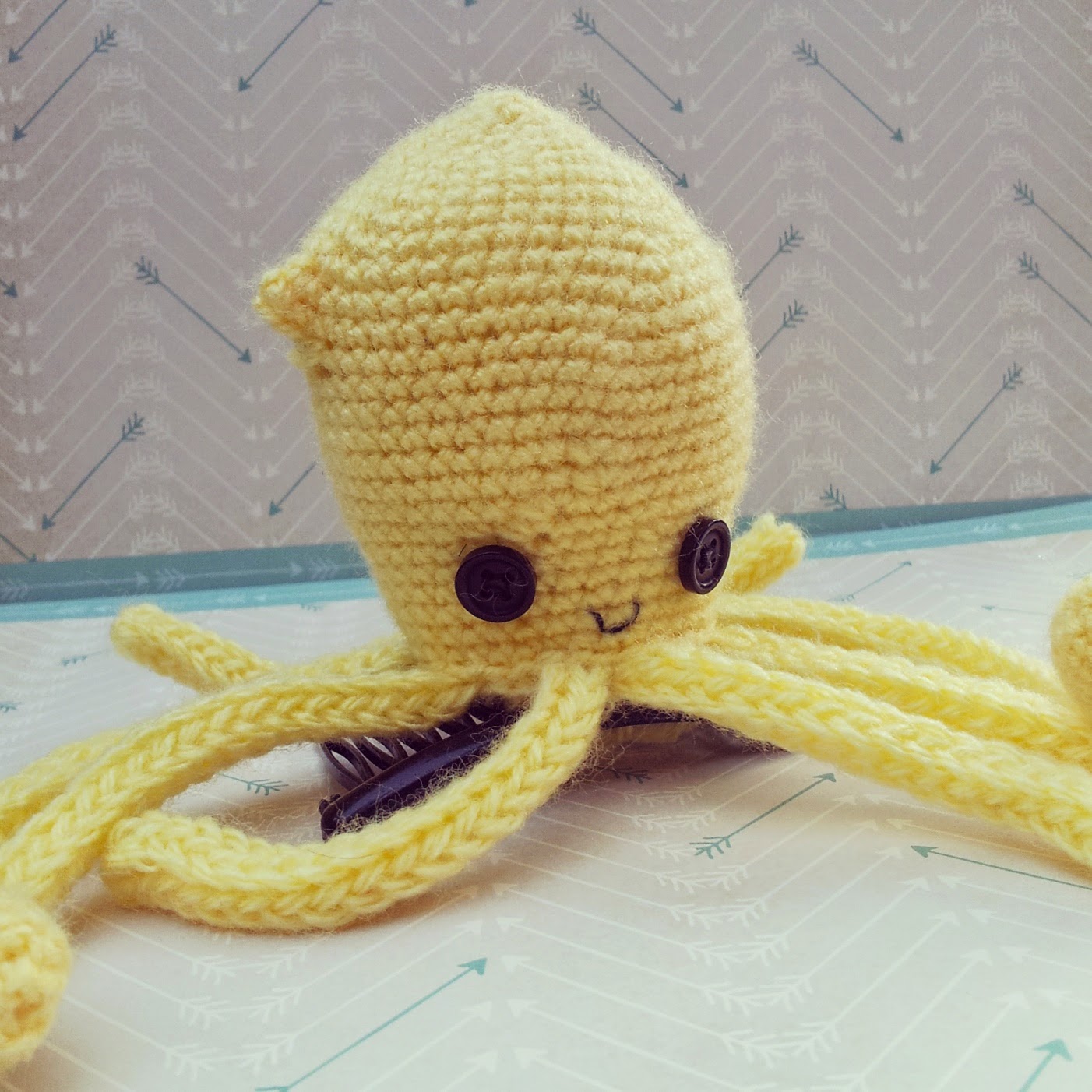 To attach my kraken into my hair, I used a yarn needle to thread a short length of wool through the base of the kraken. I then tied the two ends of the wool into a bow, making sure to go through the teeth of the hair comb so that it would stay attached. When the party was over, all I had to do was undo the bow and pull out the yarn to detach the hair comb. 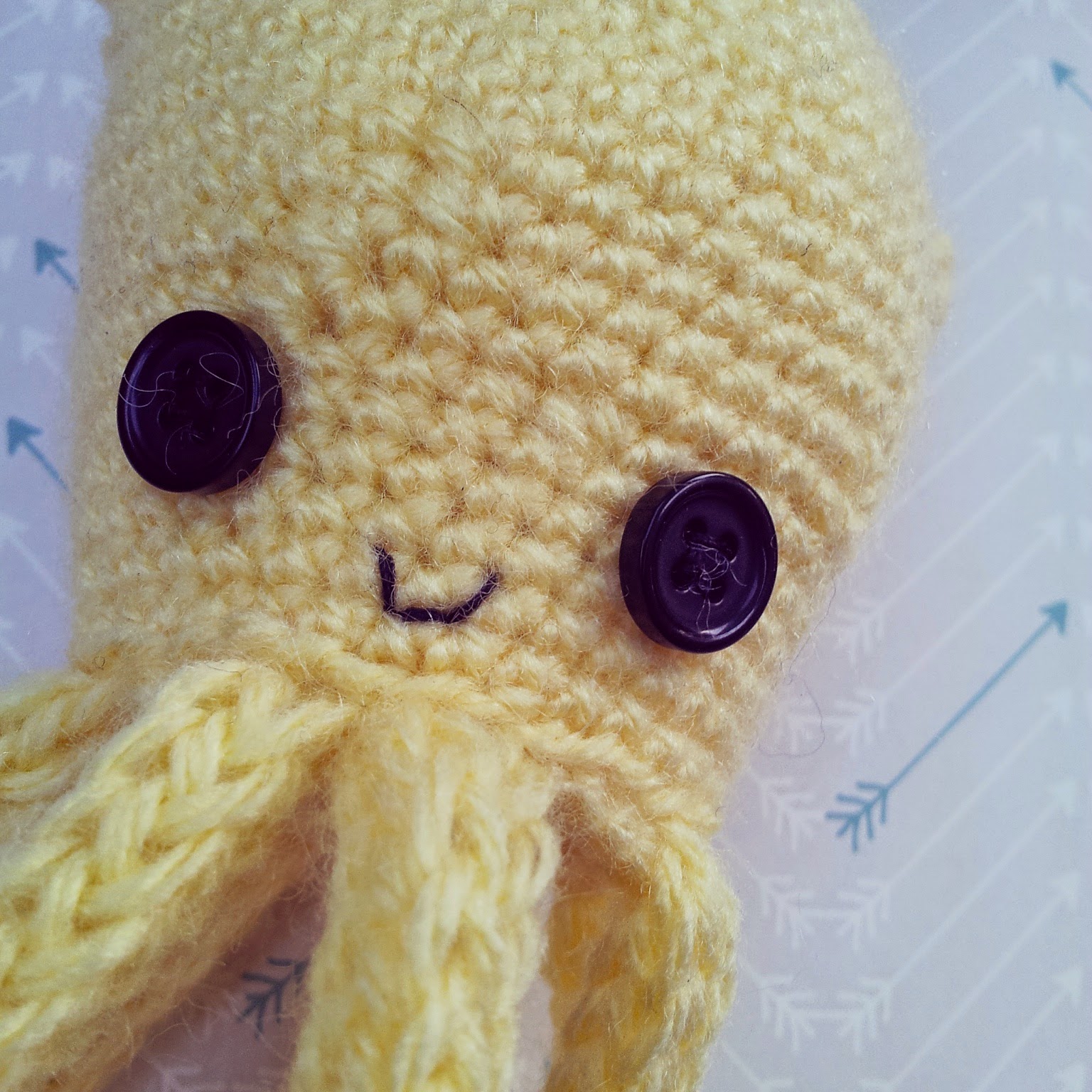 I used buttons instead of safety eyes and I gave my kraken a little smile with some embroidery thread; just because the Greyjoys are mean (along with basically every House in the series ...) doesn't mean my kraken has to be! 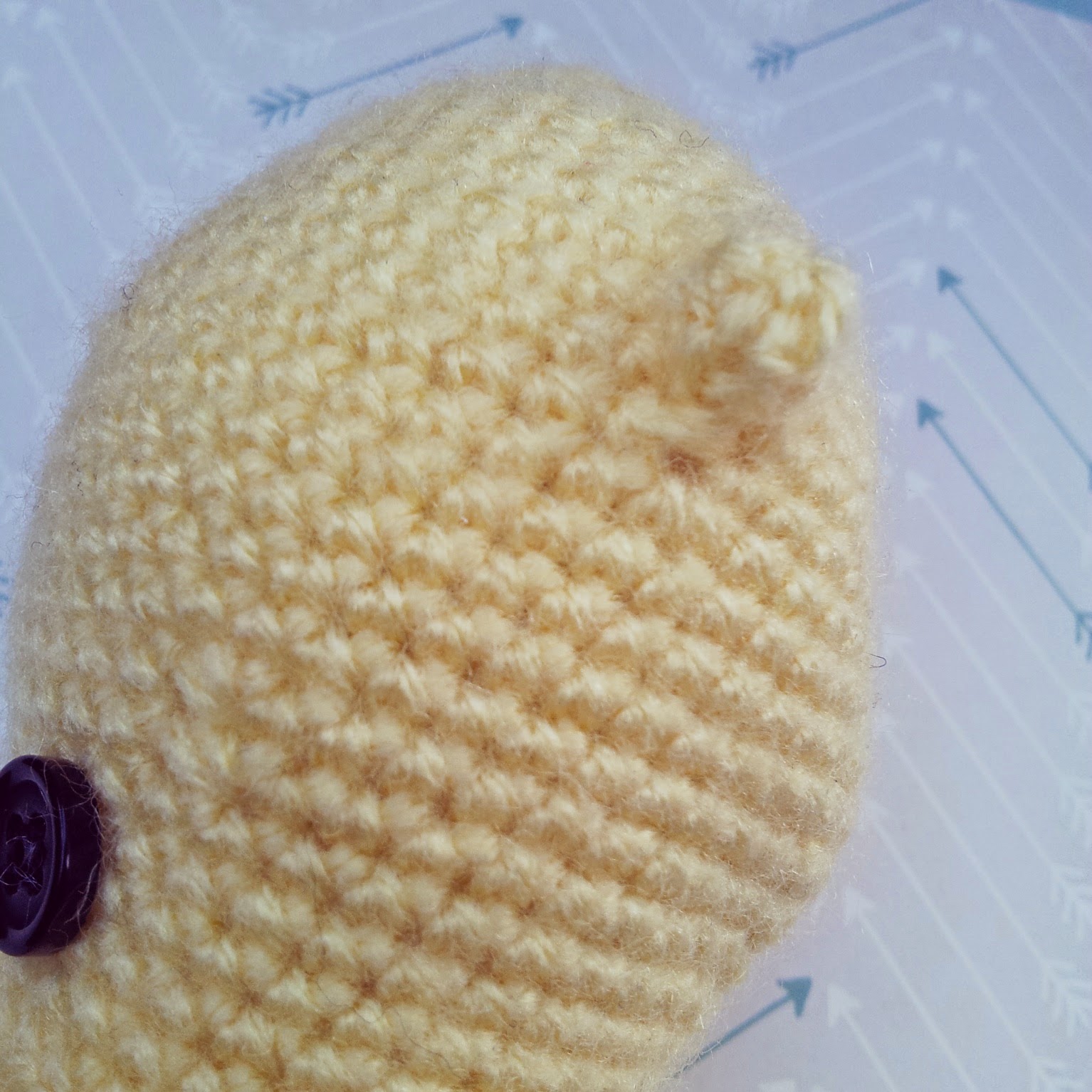 The pattern doesn't say anything about sewing up the little gaps underneath the head fins, but I did because I was concerned that the stuffing would leak out otherwise. 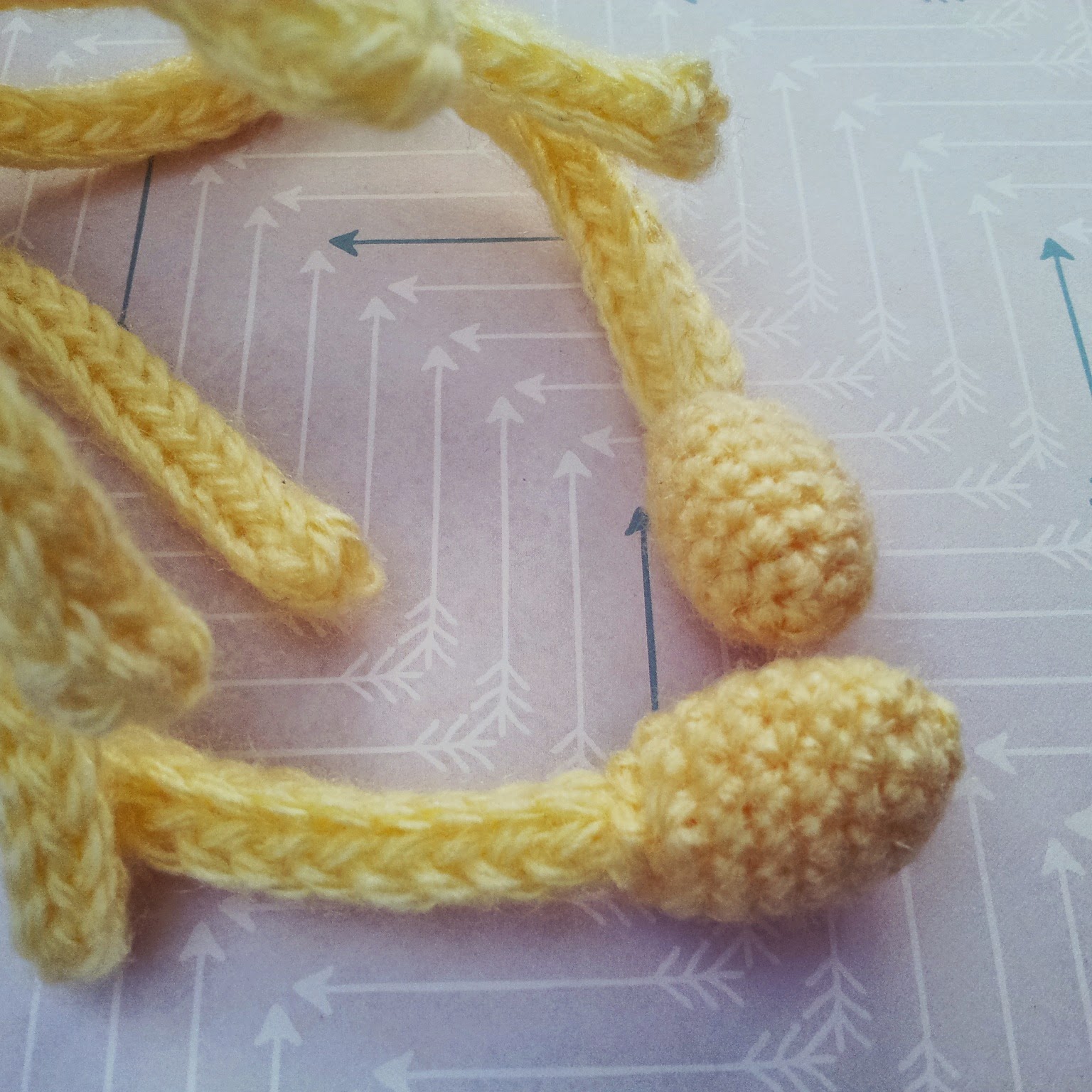 And I french knitted the tentacles and arms because I really, really, really don't like crocheting arms and legs. This is probably the main reason I don't make more amigurumi! 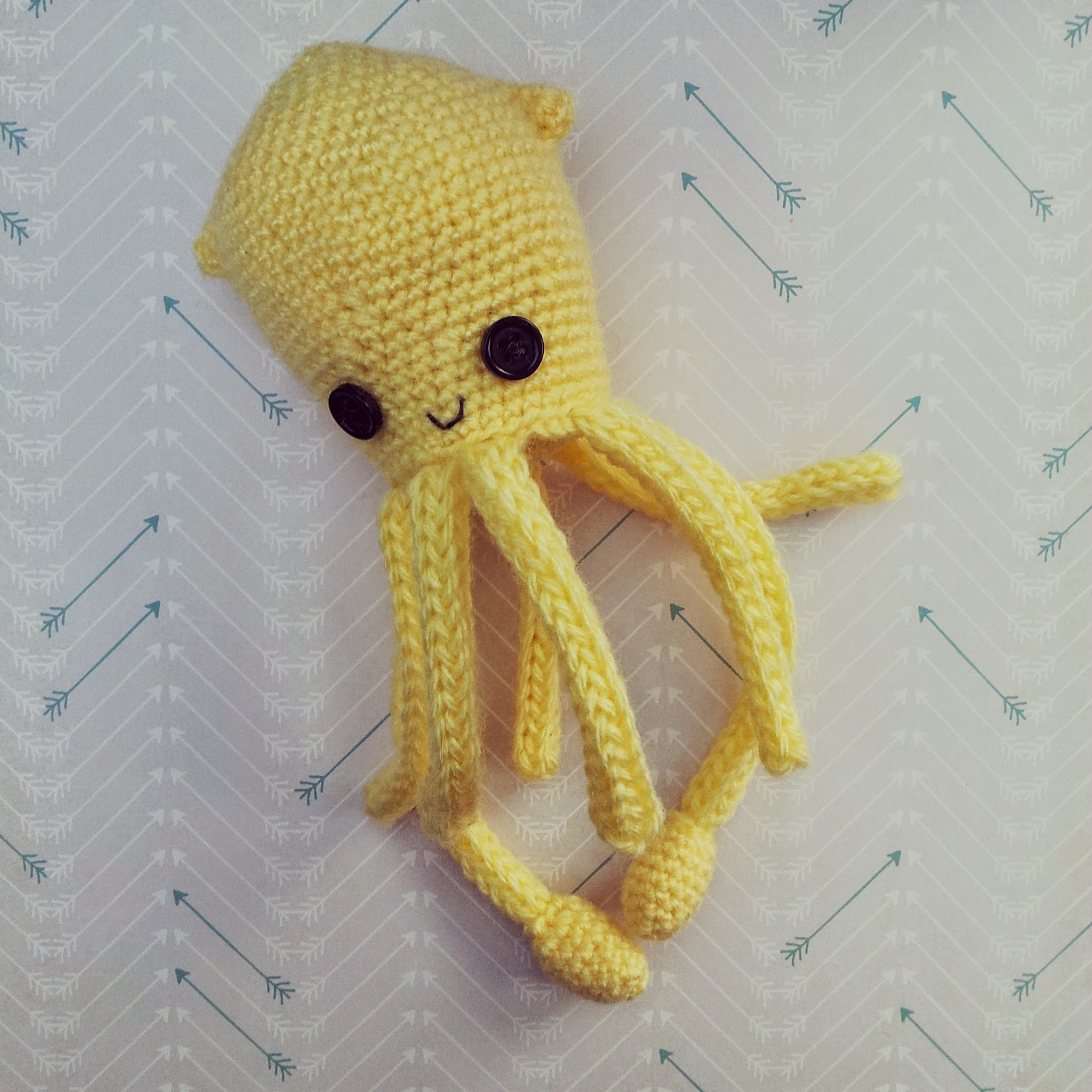 I also put wire in the arms and tentacles to make them posable. However, my pipe cleaners were too thick to go in so I used floristry wire which isn't really as strong as it needs to be to hold the arms up. So it's really only semi-posable, but I still think it's more fun than having totally floppy arms. 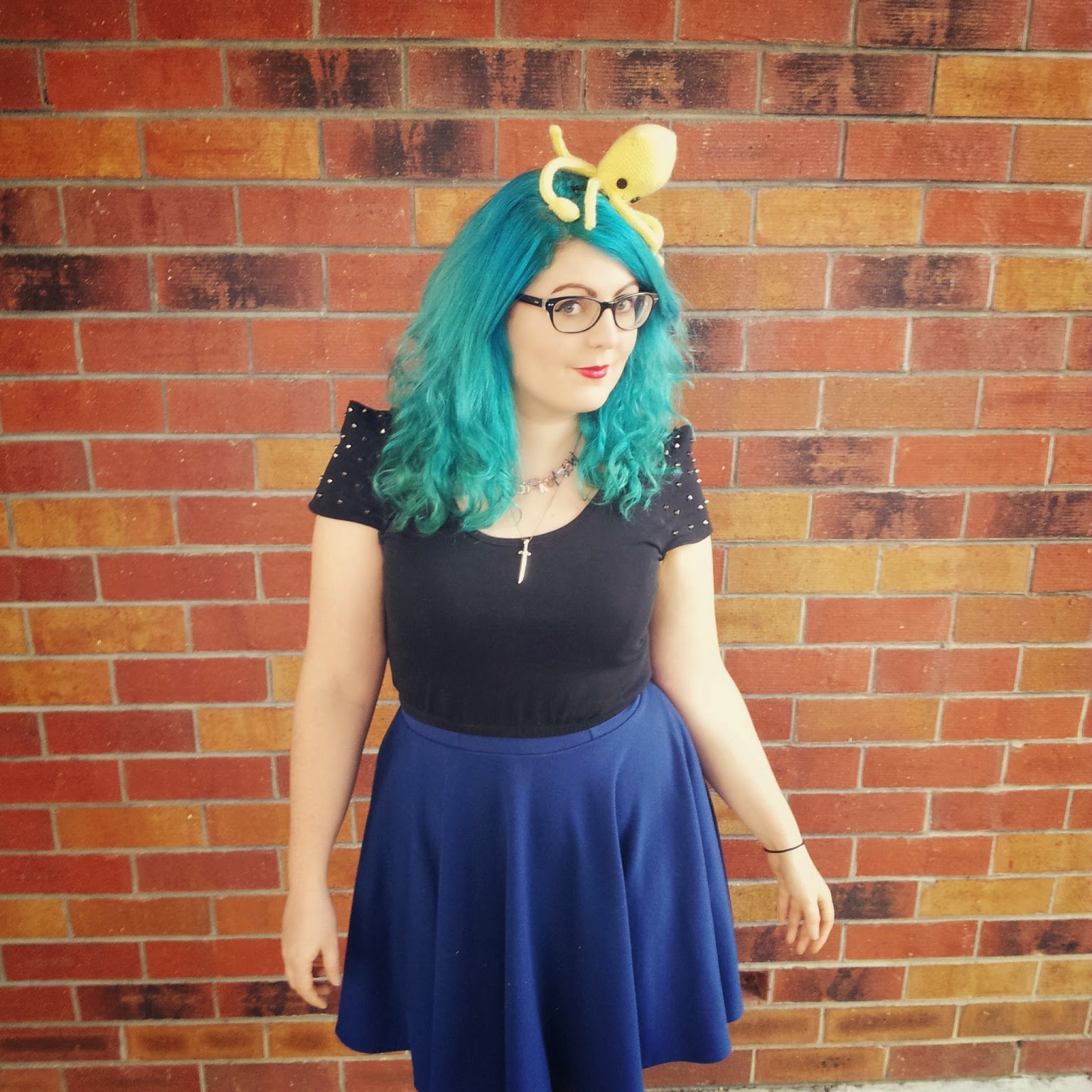 For the rest of my outfit, I stuck with blue and black, with some studs and boots for that piratey flavour! 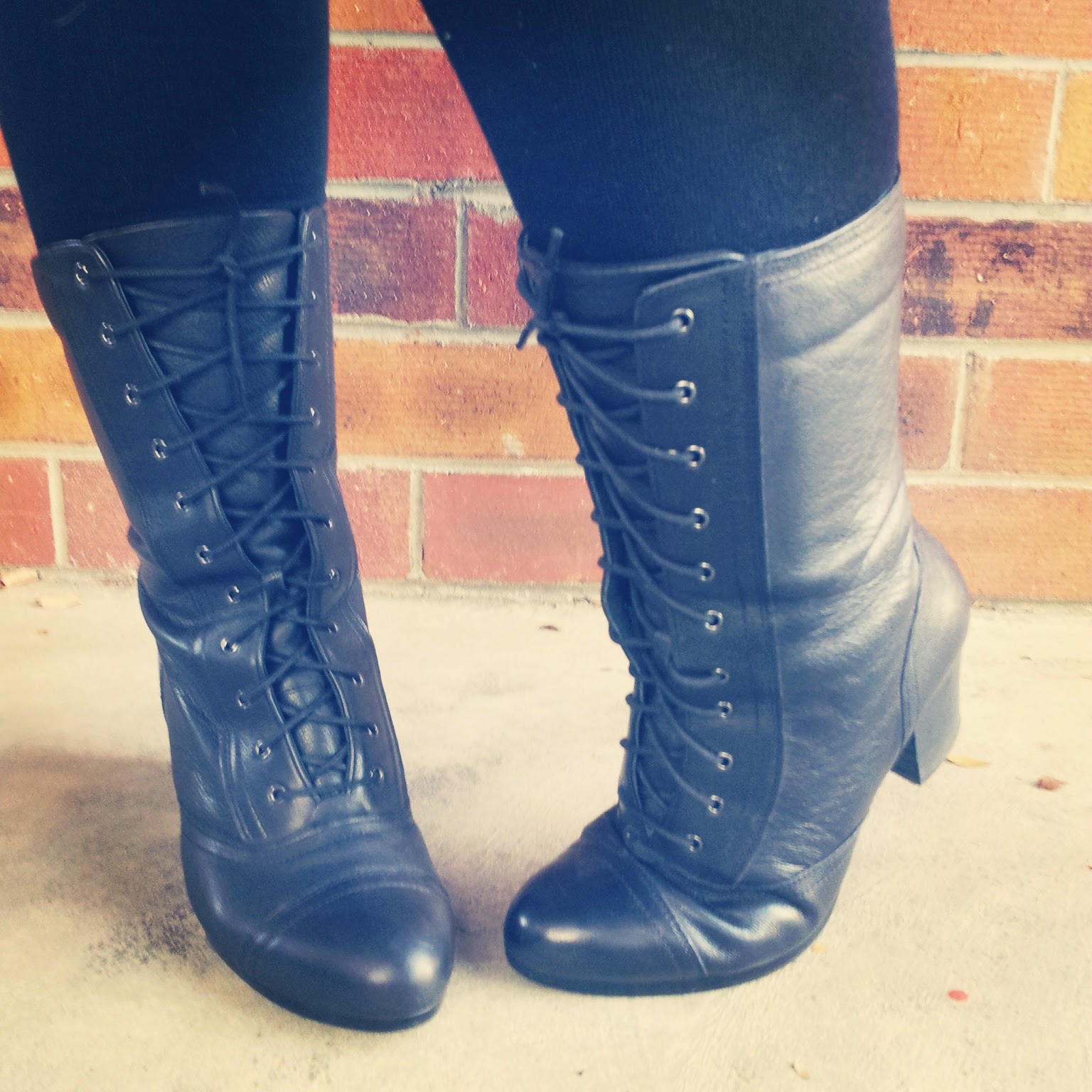 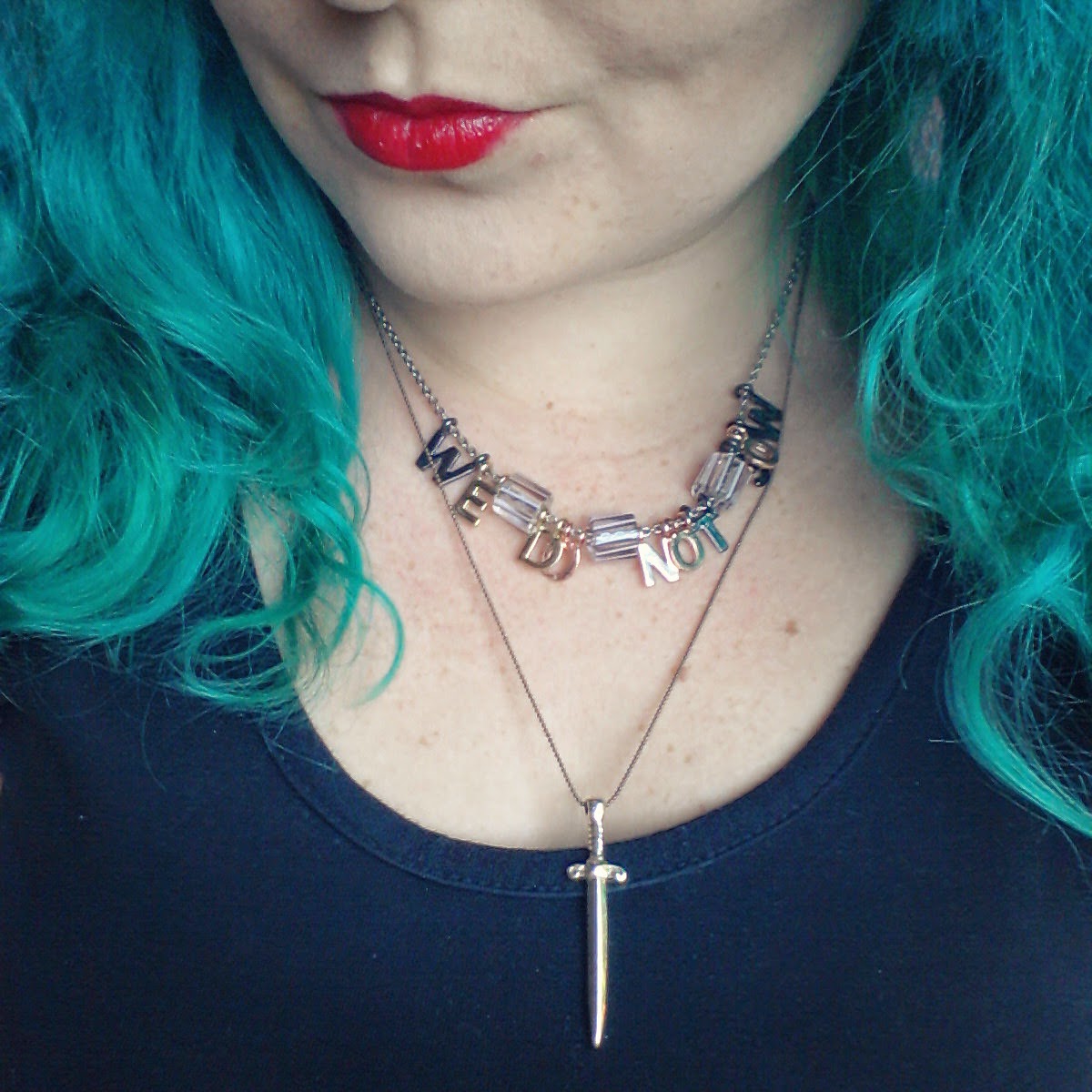 I wore my sword necklace (since the Greyjoys pay the Iron Price!) and made my word necklace say "we do not sow" which I think were the perfect finishing touches to my outfit ^____^ 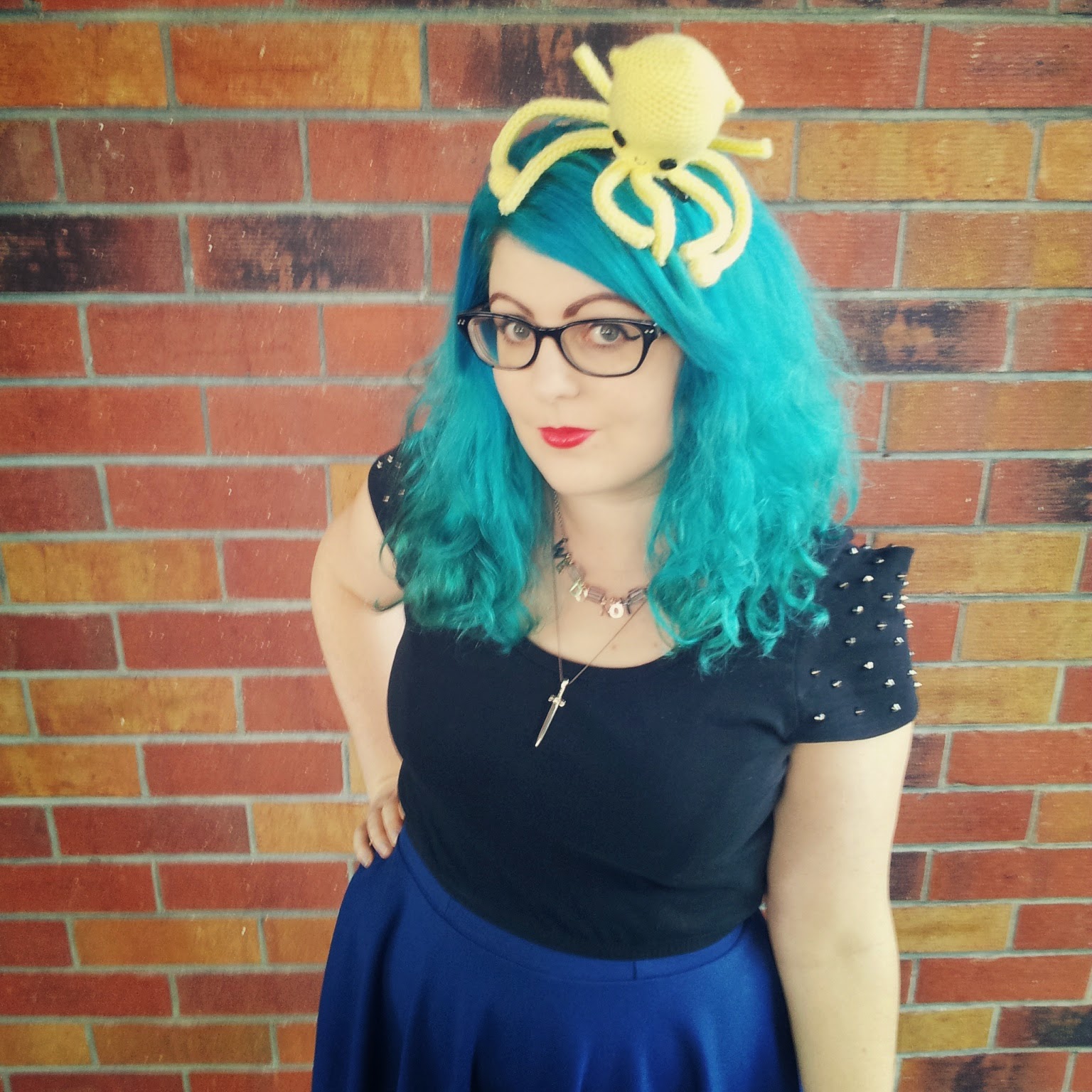 I'm currently working on gifts for three different people, so hopefully I'll gift them soon and be able to share some photos with you! I've been getting a lot done on them because I've gotten a nasty little cold. Tomorrow night is revision week for my roller derby training, so I really hope this awful cough I developed over the weekend is gone by then. And, of course, revision week means that assessment week is only seven days away! Eeep! Last week I made 22 laps in 5 minutes for the first time so if I can do that again I might actually pass ... but if I don't pass (which I personally feel is highly likely) then I have another twelve week cycle ahead of me for which to continue practising all the new skills I've been learning ^____^ It's a win-win!

What a cute little Kraken! Does it have a name?

Your outfit is so cute! I love the Kraken ♥
Amy xx

Thanks Alecia! No, it doesn't have a name yet ... any suggestions?

Thank you Amy! Wearing crop tops over dresses is one of my new favourite things - it makes my wardrobe feel very versatile! ^___^

I definitely need to make myself a little Kraken of my own! He's SO cute!

You definitely should make yourself a Kraken, Kate! The pattern is fantastic, and they make great companions (when they're not being fascinators! ~___^