Hello! Here's something about me: I don't eat chicken. Not for any reason except that I don't enjoy the taste, which is something most people find incredibly abnormal. It doesn't often come up in conversation (unless we're having a conversation about fussy eaters because, wowzers, I can certainly contribute there ...) but this little fact made me find it rather amusing when I mentioned to a co-worker that my evening plans were to continue making a chicken for my friend and her response was " ... like ... cooking one ....?" She was utterly confused why it would take more than a day to prepare a chicken which I assume is understandable, *unless* you're talking about amigurumi! 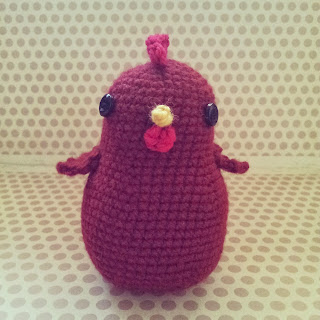 My wonderful friend Catherine gifted me with some lovely hand-dyed wool for Christmas last year and, since I am a terrible, terrible friend, it has taken me this long to complete the chicken amigurumi that she requested in return. Oh dear. I better start working on her present for *this* year now so this doesn't happen again! 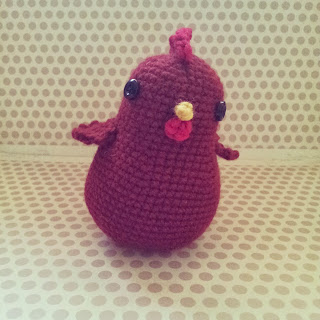 As with many amigurumi, the first challenge arose with finding the perfect pattern (well ... it was possibly the procrastination, but stick with me here). I had a firm idea of what I wanted the chicken to look like, but no real skill in shaping 3D objects that would allow me to freestyle. 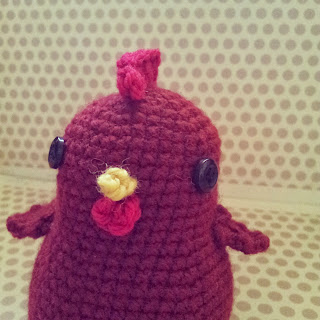 And then, happily, I found Jennifer Olivarez' pattern for her Rainbow Chicken. The Rainbow Chicken had the perfect chubby body that I wished for my chicken, so I got out my hook and yarn and made it up. 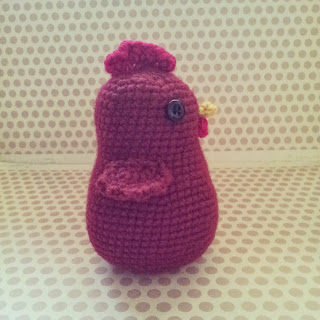 I love how squishy and chubby and curvy this chicken is! I stuffed it very firmly with polyfill so that it would keep it's shape and stand up by itself. Well, mostly. This chicken does have a tendency to want to lean a little, but I think it just adds to its charm. 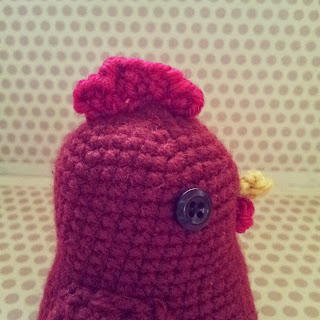 The next step was to make the crest, for which I again followed the pattern except for a small change. The pattern suggests to pick up some stitches from the chicken's head and crochet the crest from there, so that it is attached as you crochet. I think my tight tensioning is possibly to blame, but I couldn't get my hook through my stitches! So instead I crocheted five chain stitches to use as the base, and then did the rest of the crest in these chains instead. Afterwards I used a tapestry needle to sew it on to the chicken's head. 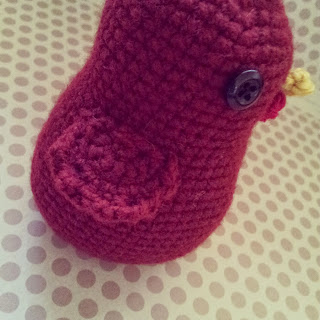 I did my own pattern for the wings, which are really just half-circles and are worked in rows rather than circles. Here is a little pattern for them, which remains untested and so probably contains errors.

I made two wings, and then sewed them to the chicken's body using the long end from where I tied off and a tapestry needle. 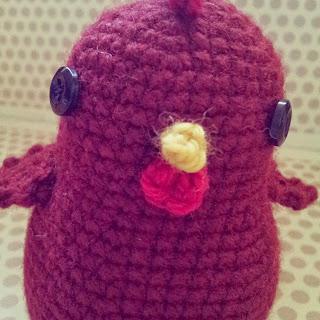 To make the beak, I did two chains and then made three single stitches into the second chain from the hook. Then I slip stitched into the front loop of the first single stitch, and tied off. I then used the two long ends of the beak to sew it to the chicken. Honestly, the beak does not have much of a shape, but because it is so small, it doesn't really need to. For the ... whatever that thing is called is that chickens have below their beaks, I chained twice (again!) and did three trebles into the second chain from the hook. Then I tied off and used the long ends of the yarn to sew it underneath the beak. The most important part for this is that you leave the ends long because that is what you use to draw the stitches into the teardrop shape. 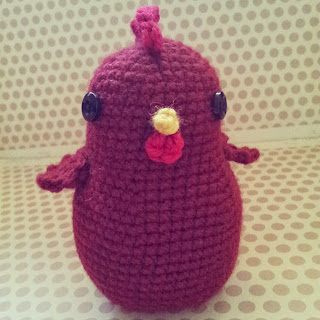 After that, the only thing left to do is to sew on some black buttons for eyes and the chicken is finished, hurray! Catherine has already named her Ruby Red, from the book "Banjo and Ruby Red" and I think she's rather sweet ^___^ Ruby Red stands 11cm tall from bottom to crest and is 22cm wide around her belly. 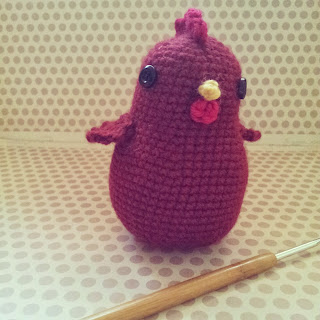 I'm currently working on some projects for my partner in the Welcome to Night Vale swap on Craftster. I've never done a swap with someone I don't know before, and I'm finding it really tough! Although I have spent quite a bit of time on the projects that I've completed, I feel like the swap package doesn't look very impressive. Yet, I need to balance this with making things that aren't going to be too heavy or delicate to post and that don't take longer than the swap guidelines suggest. It has to be in the mail by the end of this week though, so I will be forced into a decision one way or another!

And yes, this chicken is super cute for sure! The chubbiness is juuust right.

It makes me miss doing amigurumi. It's been forever since I've done any ~ I've been too busy knitting and sewing! :S First world problem right? :P ❤

Awww, this is adorable! I tried amigurumi a few times, but never really got into it. This makes me want to try again! ♥
Amy xx

Thanks Bonita! It's definitely a real thing: crafting opportunity cost! For all the time I spend on one craft, it's time I can't spend on another ~____^

Thanks Amy! Amigurumi is not my most favourite thing to make, since it so often involves lots and lots of tiny pieces, but a nice simple one like Ruby is a lot of fun to do ^_____^