I have wanted to make a Lumpy Space Princess plushie for ages - and now I finally have! Yay!! 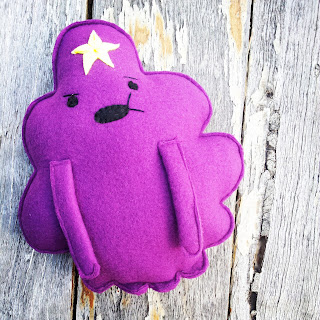 I made her from some purple fleece that I had leftover from Scott's baneling plushie, and also some yellow and black felt. 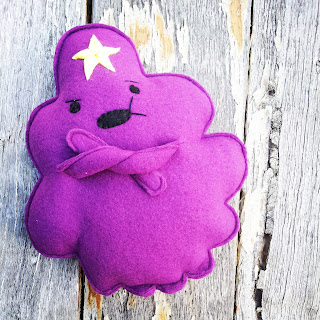 She was very easy to make, and she has floppy little arms that you can pose! 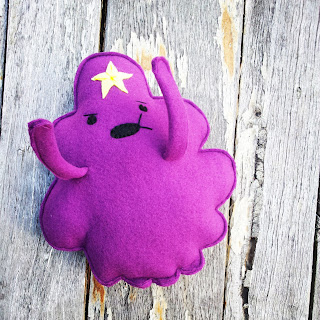 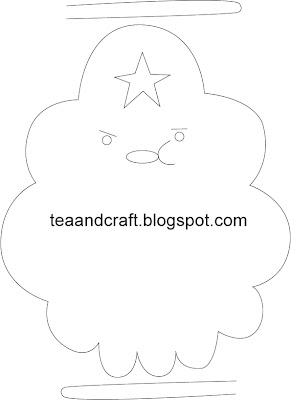 And I made a pattern so you can make a LSP too! It's a really, really basic pattern, but it did turn out really well so I hope you like it anyway ^_^ The .pdf is hosted on Google docs and so if you click the image above, it should take you there! (Let me know in the comments if it doesn't work!) 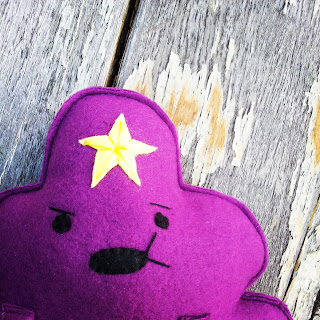 I don't really like turning plushie pieces inside out because I find that I never get the crisp lines I'm after, so I made LSP in what I *think* is called gingerbread style? It is quite possible that I'm just making that up, but I seem to remember my mum making some dolls this way when I was a child. Basically it just means that you sew your plushie together with the wrong sides in, and then trim the seam allowance afterwards. If anyone knows the actual term for this, I'd love to hear it!

Anyway, here's how to make your own Lumpy Space Princess plushie:

1. Print out the pattern on to A4 paper - it should take up the entire page.
2. Cut out your fabric shapes, and remember to add a pretty wide seam allowance to the purple fleece. With her arms, I folded the fabric over and placed one of the arm edges along the fold.
3. Sew on LSP's facial features.
4. Pin the arms together, wrong sides in. Sew around the edges that aren't on the fold.
4. Trim off the excess seam allowance, and then sew them on to LSP's front. Remember not to stuff them! This makes them floppy enough so that she can cross them ^_^
5. Pin LSP's front and back together wrong sides in and sew her up - remembering to leave a small gap so that you can stuff her!
6. Stuff, stuff, stuff.
7. Sew up the gap, and trim the seam allowance all around the edge.
8. She's done! Now give her a hug, take a selfie, and prepare to become best buds ~_^ 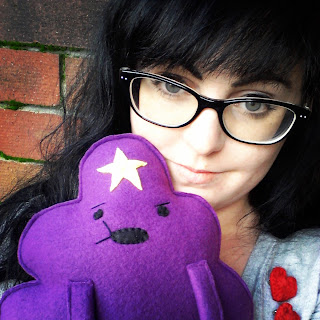 Oh my glob is right! i LOVE that you can cross her arms - totally epic.

I need one of these in my life. Where'd you get your fabric? I'll need to keep a lookout for an appropriate colour on my next trip to spotties.

You're in luck, Tanya! I picked up the fleece at Spotlight ^_^ If you make one, I'd love to see her!

Lisa she is adorable and I too love her folded arms pose. She is also my favourite colour. Yay.

That's so cute! I love the folded arms - she's got attitude!

ihihihi tx for your pattern i started to do it :D thanks from peru

That's awesome Yuki! I'd love to see your finished LSP! Maybe when she's done you could send me a link? ^____^