Hello! I think it's because I've been watching waayyy too much of those tattoo shop reality TV shows but I've had tattoo style designs on the brain lately. I designed a little skating badge and then when I was brainstorming present ideas for my friend Steve, who is a body art aficionado, I decided to tweak it a little and came up with these fun mugs! 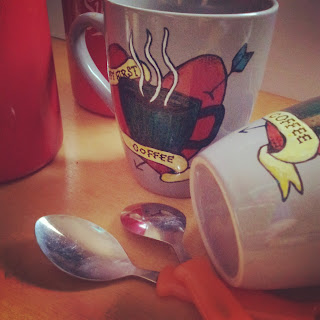 I don't drink coffee, but I'm still kinda in love with this design! I want to make one for myself; I don't know if "but first, tea" has the same ring to it though ~___^ 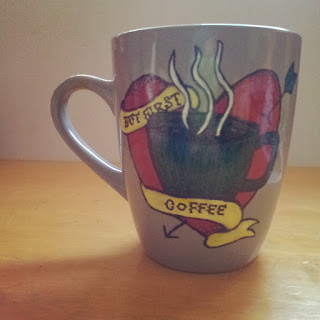 To make them, I used some plain coloured mugs and Pebeo porcelain pens. And of course a tattoo flash inspired design! After designing the image in Illustrator, I printed it out onto regular paper and cut it out to use as a stencil. I used a pencil to lightly stencil the basic shapes of the design onto the mug. 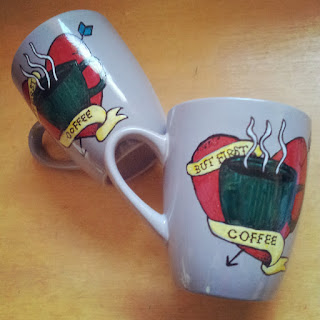 Then I went over the line work with a black porcelain pen. Getting the lines straight on a curved surface is a little tricky, but slow and steady does the job ^___^ Next I coloured in all the shapes - yay! 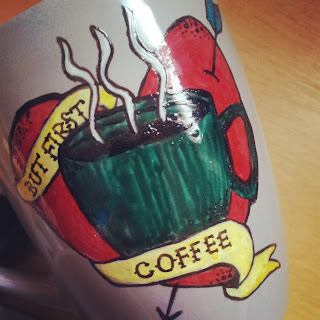 You can see that my colouring in isn't the best ... the Pebeo porcelain pens don't give the best coverage for large surface areas. That said, they are much much much better than the porcelain paint you get in pots - that stuff is so streaky! It's very strange since they are made by the same company. 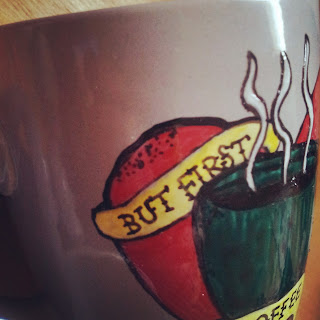 After I'd done the colours, I went back to the black pen to thicken some of the line art, write on the words (I copied the Cute Tattoo font for these btw), and add a little bit of vintage tattoo style shading. I won't be allowed to touch a tattoo machine any time soon, but I like the little touch of grunge the speckles added ^___^ 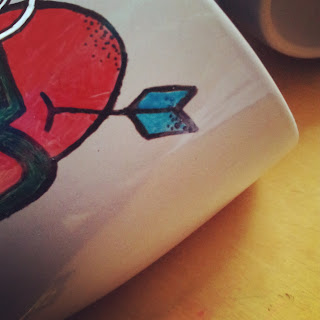 I'd like to try some other brands, because I think being able to properly paint (as in, with brushes) would allow me to add more detail and get better colour coverage, but I do really like how the Pebeo paint pens look on the grey mug - they came up quite true to colour which I was pleased with as I was a bit worried they'd all look muddy! 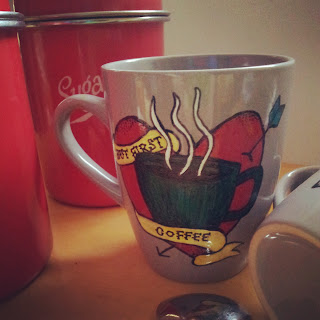 The Pebeo pens say that they are dishwasher safe after 72 hours of air drying, but my personal tests have shown that to be untrue. Well, I say personal ... one of my work colleagues put a kitty mug in the dishwasher. Not pretty! So, to hopefully keep these designs in place longer, I baked them in the oven on the lowest setting for a couple of hours. Even so, I included a little mug care sheet in the gift bag which suggested only light hand washing be applied to these babies!

I think birthdays are mostly over for the next couple of months, so until October I plan to only do selfish makes ~____^ I'm currently working on a hat, and then ... I don't know! I'm much more indecisive when it comes to making things for myself then I am with making presents for others. So, help me out: if you were me (and I was you!) and you were making me a present, what would you make? Reading your comments will be like my birthday! ^____^